The Undertaker: The Many, Many Returns of the Phenom Since His Debut 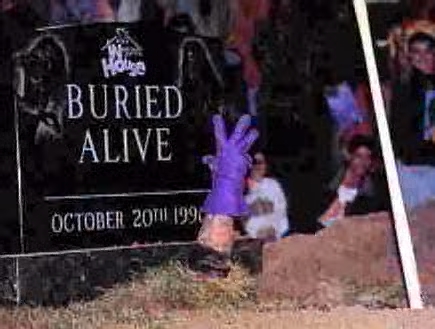 Now that we all basically know that the Undertaker is returning on the 2-21-11 edition of Raw, I thought I'd go through all of his returns since his debut in WWE in 1990.  The Deadman is probably my favorite wrestler of all time, and every time he returns, it's a great WWE moment.

(BTW, I tried to get the videos of the returns, but for some reason, it wouldn't work. So for now, all I have is pictures. Enjoy!) 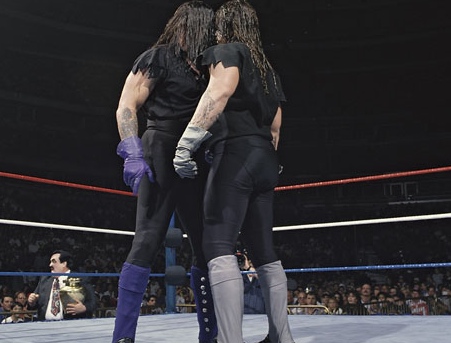 At the 1994 Royal Rumble, The Undertaker faced Yokozuna for the then WWF Heavyweight Championship in a casket match.  As Taker got the upper hand, some heels from the WWF roster came out and helped Yokozuna put down the Deadman and throw him in the casket.  As they wheeled him to the back, the lights in the arena went out and Taker appeared on the titantron.  He said he would return and rose to the top of the arena in a now classic WWE moment.

Some time after Wrestlemania 10, Ted DiBiase brought back "The Undertaker", but everyone thought there was something odd about this Undertaker.  In fact, it was a fake.

At the '94 Summerslam, Paul Bearer brought back the real Undertaker, now wearing purple instead of his signature grey, and he defeated the "Underfaker" by hitting him with three tombstones. 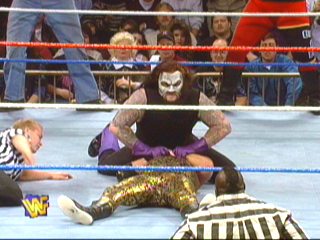 In 1995, Undertaker was in a short feud during the summer with the massive King Mabel.  One night, Mabel viciously attacked Taker and performed a devastating leg-drop on his face. This put Taker out of action for a few months with a broken orbital bone.  At the 1995 Survivor Series, he returned wearing a grey mask and led his team to victory.  The mask would only last a couple of months. 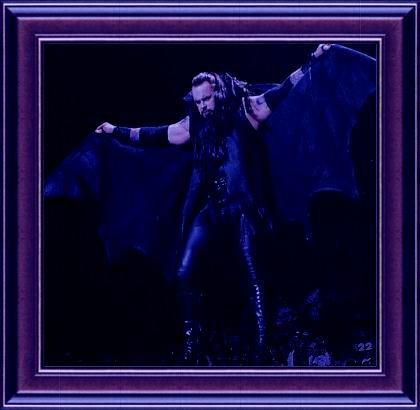 One of the best feuds in WWE history was between the Undertaker and Mankind.  The feud started the night after Wrestlemania in 1996 and went on for the rest of the year.  During the feud, the Undertaker's long time manager Paul Bearer turned on him and sided with Mankind.

The following month, The Undertaker defeated Mankind in a Buried Alive match, but in the end, it was Mankind standing tall.  Mankind, along with other heel superstars, ended up burying Taker after the match.

At the Survivor Series that year, Taker returned, wearing new leather attire, and defeated Mankind.  He would later win the Heavyweight title a few months later at Wrestlemania 13. 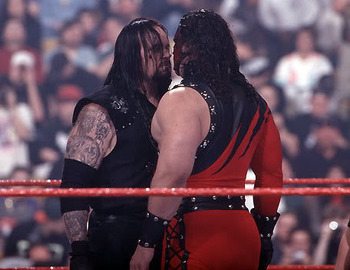 When Kane debuted at the first Hell in a Cell match in 1997, he immediately went after his brother, the Undertaker.  He would attack Taker week after week, demanding a match with his brother.  Taker refused to fight his brother and briefly started a partnership with him.

But at the 1998 Royal Rumble, Kane betrayed his brother by costing him the WWF Title and set a casket on fire with Taker inside.

Undertaker finally agreed to match with Kane and returned at Wrestlemania to barely defeat his brother in the first of many matches between the two over the next 13 years. 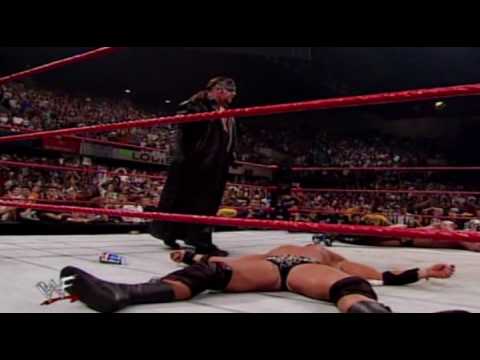 Towards the end of 1999, the Undertaker grew tired of the way Vince McMahon was leading the Corporate Ministry, and the groups broke apart.  He would wrestle for a little while after the break-up but would soon go down with a groin injury and was written off WWE programming.

He returned at the 2000 Judgment Day after weeks of build-up that someone would return at the event. He interrupted a beat down on the Rock during his Iron Man match with Triple H.  Triple H, DX, and the McMahons were beating on the Rock when Undertaker, wearing a trench coat and jeans, rode down to the ring on a motorcycle and took apart the union.  This would begin his phase as the American Bad Ass. 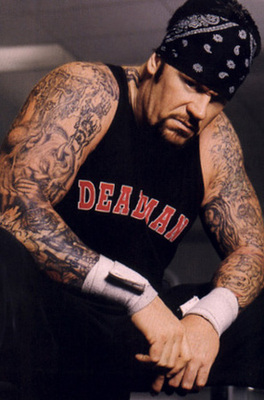 After getting thrown off the entrance stage by Big Show in the fall of 2002, Big Evil returned as the No. 30 entrant of the 2003 Royal Rumble.  He would be the runner-up to the winner, Brock Lesnar. 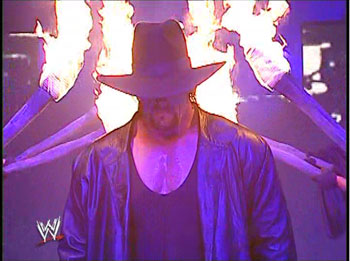 At the 2003 Survivor Series, Vince McMahon, along with a big help from Kane, buried the Undertaker alive.  At the beginning of 2004, week after week, Kane would be disturbed with messages announcing the upcoming return of the Deadman.  At Wrestlemania 20, The Undertaker, back with Paul Bearer and back in his Deadman gimmick, returned and defeated Kane.  This is another great moment in WWE history. 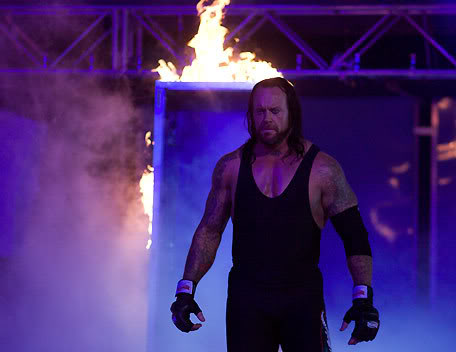 Throughout 2005, the "Legend Killer" Randy Orton was hell-bent on putting down the Undertaker.  He thought he finally succeeded when he defeated Taker in a casket match.  After he set it on fire, he opened it up and saw Taker was gone.  At Survivor Series, after Orton was the last man standing in his elimination match and celebrated with his fellow superstars, The Deadman returned and took out everyone in his path to get to Orton.  Another great moment for Taker and the WWE Universe. 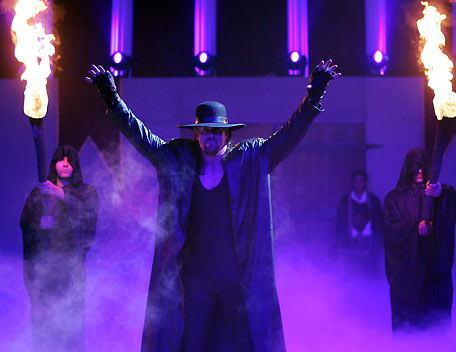 After being away for a month, The Undertaker returned at the Royal Rumble, signaling to Kurt Angle that he wanted Angle's World Heavyweight Title. 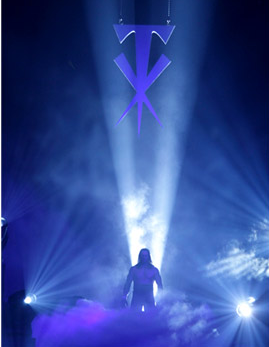 In 2007, Mark Henry cost Undertaker his Heavyweight Title after brutally attacking him and putting him on the shelf.  Taker returned at Unforgiven and took down the World's Strongest Man. 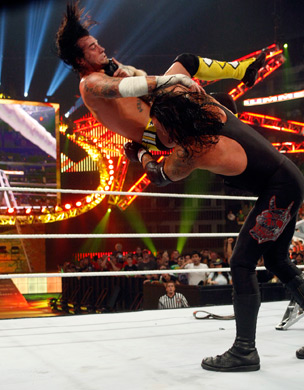 After taking time off after his classic match with Shawn Michaels at Wrestlemania 25, the Deadman returned at Summerslam by letting the World Heavyweight Champion, CM Punk, know that he wanted his title with a thunderous chokeslam. 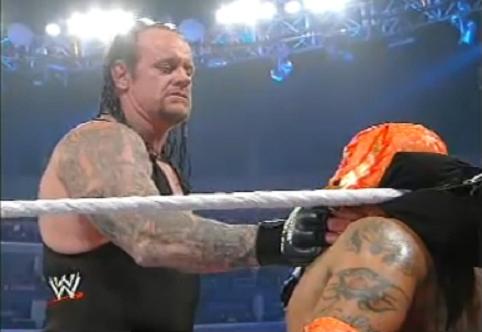 In the middle of 2010, The Undertaker suffered facial injuries and was written off television with the reports that he had been attacked and put in a "vegetative state".,  Taker's brother Kane searched for months for his brother's attacker and announced that it was Rey Mysterio who attacked Taker.  Mysterio countered the accusation by saying it was Kane who put Taker out.

At Summerslam, during a match between Kane and Mysterio, Taker returned and went for Kane, his real attacker.  Unfortunately, Kane took down Taker again and buried his brother alive a few months later.  Taker hasn't been seen since. 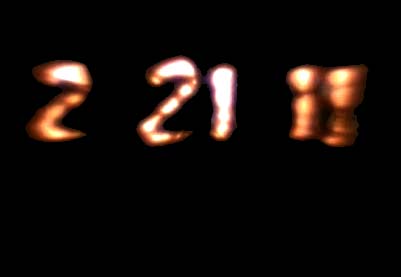 So now we wonder, what will Taker do to make his February 21st return memorable?  Who will he set his sights on next?  With Wrestlemania right around the corner and his legacy at the event, who will The Phenom face at the Showcase of the Immortals?