Denver Broncos: Why Tim Tebow Should Be Team's Starting QB in 2011 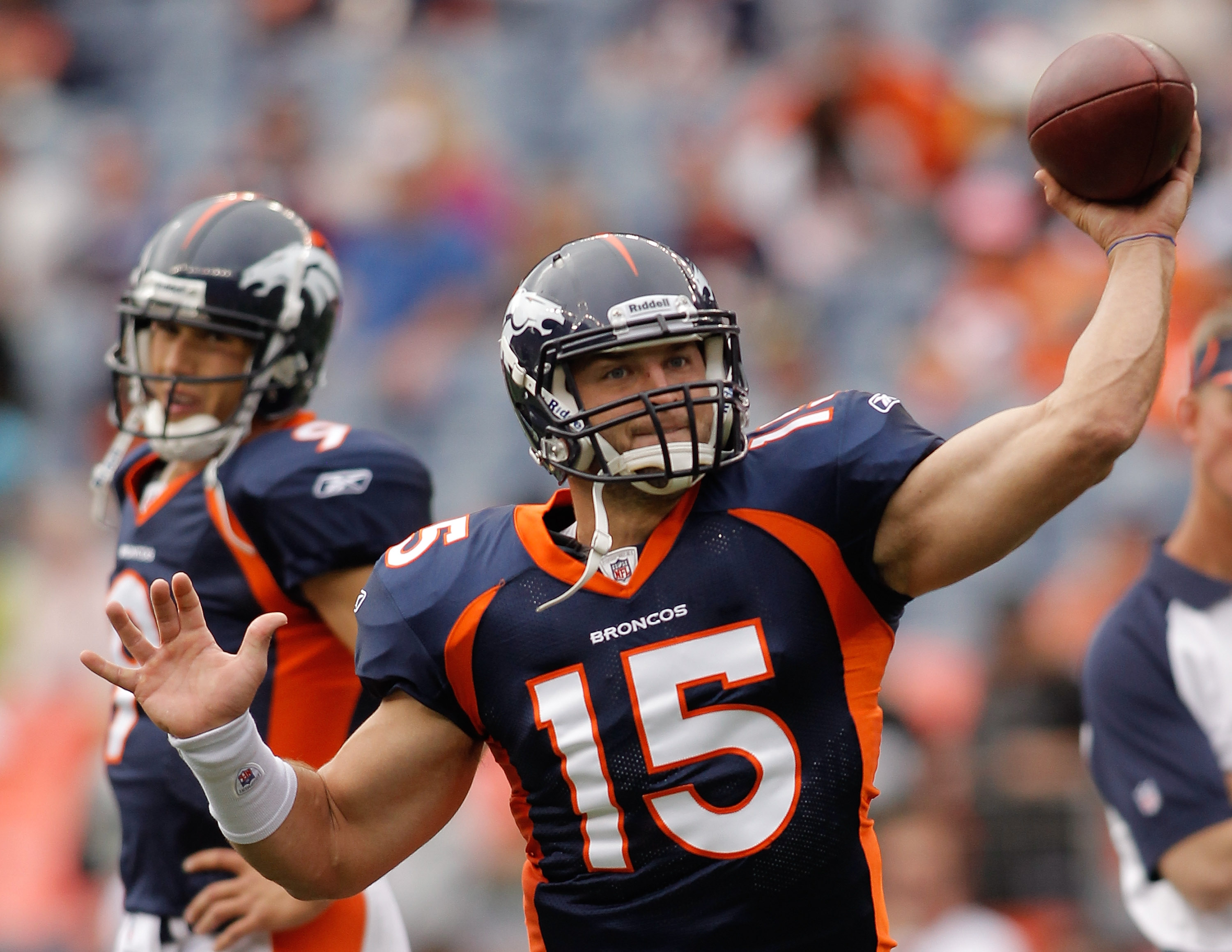 Tim Tebow Should Be the Denver Broncos' Starting Quarterback Next Season

The Denver Broncos have their work cut out for them if they want a chance at extending their season beyond Week 17 against the San Diego Chargers, and they will get a shot at these division rivals for the first time tonight during Monday Night Football.

Kyle Orton has earned his starting spot this season, and rightfully so.

Orton had a 131.5 quarterback rating after the Broncos stomped the Kansas City Chiefs 49-29 last week, throwing for just under 300 yards and four touchdowns.

But the Broncos are last in the AFC West with their 3-6 record, and we have to ask the question:

Is Kyle Orton the future of the Denver Broncos? I don't think so.

Orton is talented, but Denver has a better option: Tim Tebow.

So why should Tebow be the starter next season?

Read on to find out!

10. He Will Have a Year Under His Belt 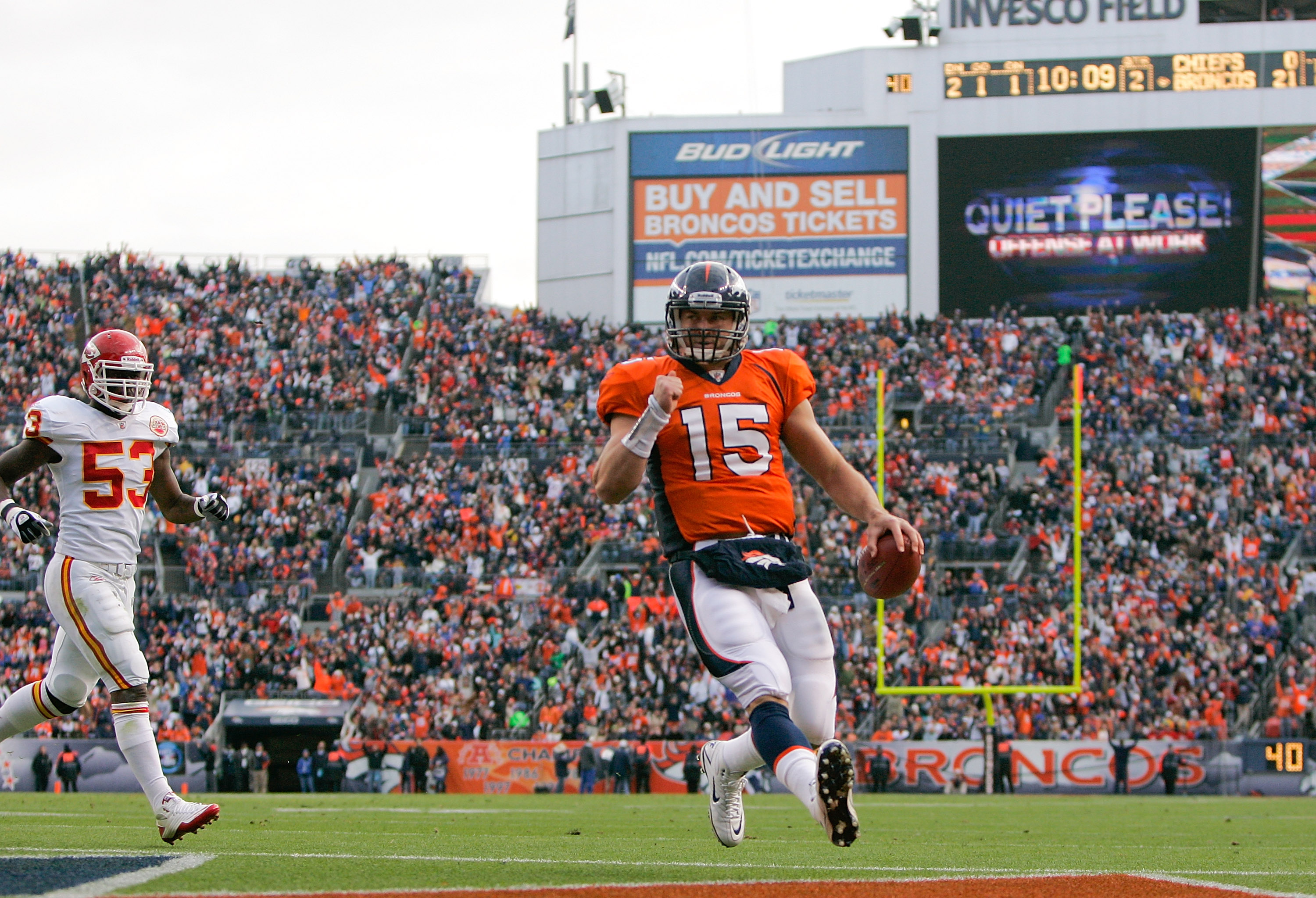 It would have been completely unreasonable to expect the Broncos to put all their eggs in the Tim Tebow basket at the beginning of this season.

Sure, the St. Louis Rams and the Cleveland Browns have been having some success with their rookie quarterbacks, but the Broncos weren't desperate enough to start Tebow.

However, after Tebow gets through his first season in the NFL, he will be used to the Broncos offense, and will be ready to step up as the team's leader.

9. He Is Smart and Eager 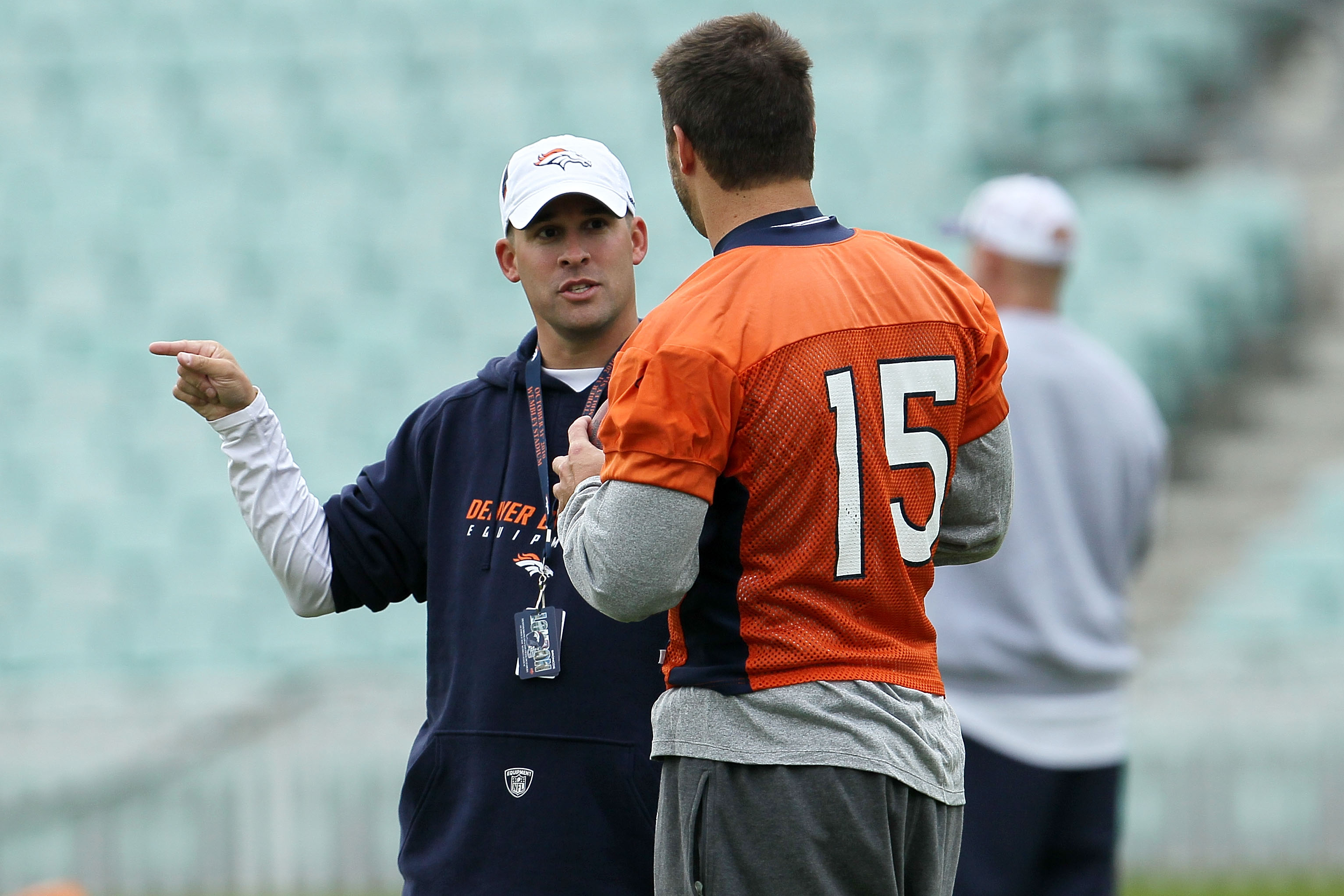 Love him or hate him, nobody can really argue Tim Tebow's intelligence.

In an interview with Peter King, Josh McDaniels explained his decision to draft Tebow before this season. McDaniels described his experience when working out the former Gator and how quickly Tebow caught on to the Broncos offense:

"[O]ur offense is pretty complicated, and the terminology and the scheme is totally different from what he did at Florida. But about midway through my time there, we're going through plays, and he starts using our terminology. He's so smart about football that he was able to begin to speak my language and talk apples to apples. He'd already translated what he knew of our scheme into my words."

If Tebow could start picking up on the Broncos' offense within just three hours, imagine what he could do after he has had a year to learn. 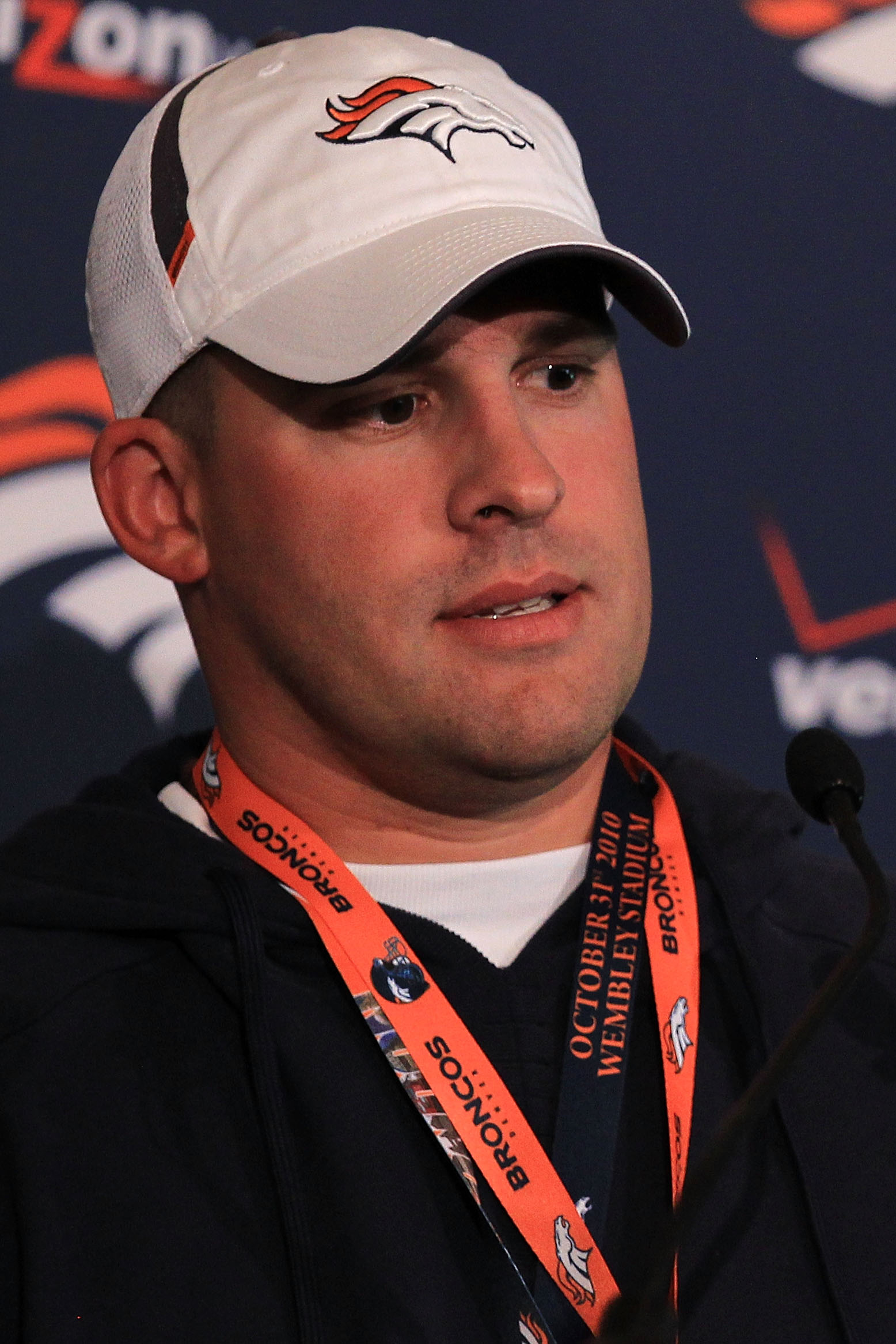 Broncos head coach Josh McDaniels is obviously very impressed with Tim Tebow as an athlete. He has said, "The football traits he has is the stuff you die for."

Those are some pretty strong words, but they tell us that McDaniels has plans for Tebow.

McDaniels is no stranger to taking chances with the quarterback position (Jay Cutler, Kyle Orton, etc.), and he just might do the same with Tebow.

7. Tebow Is a Winner 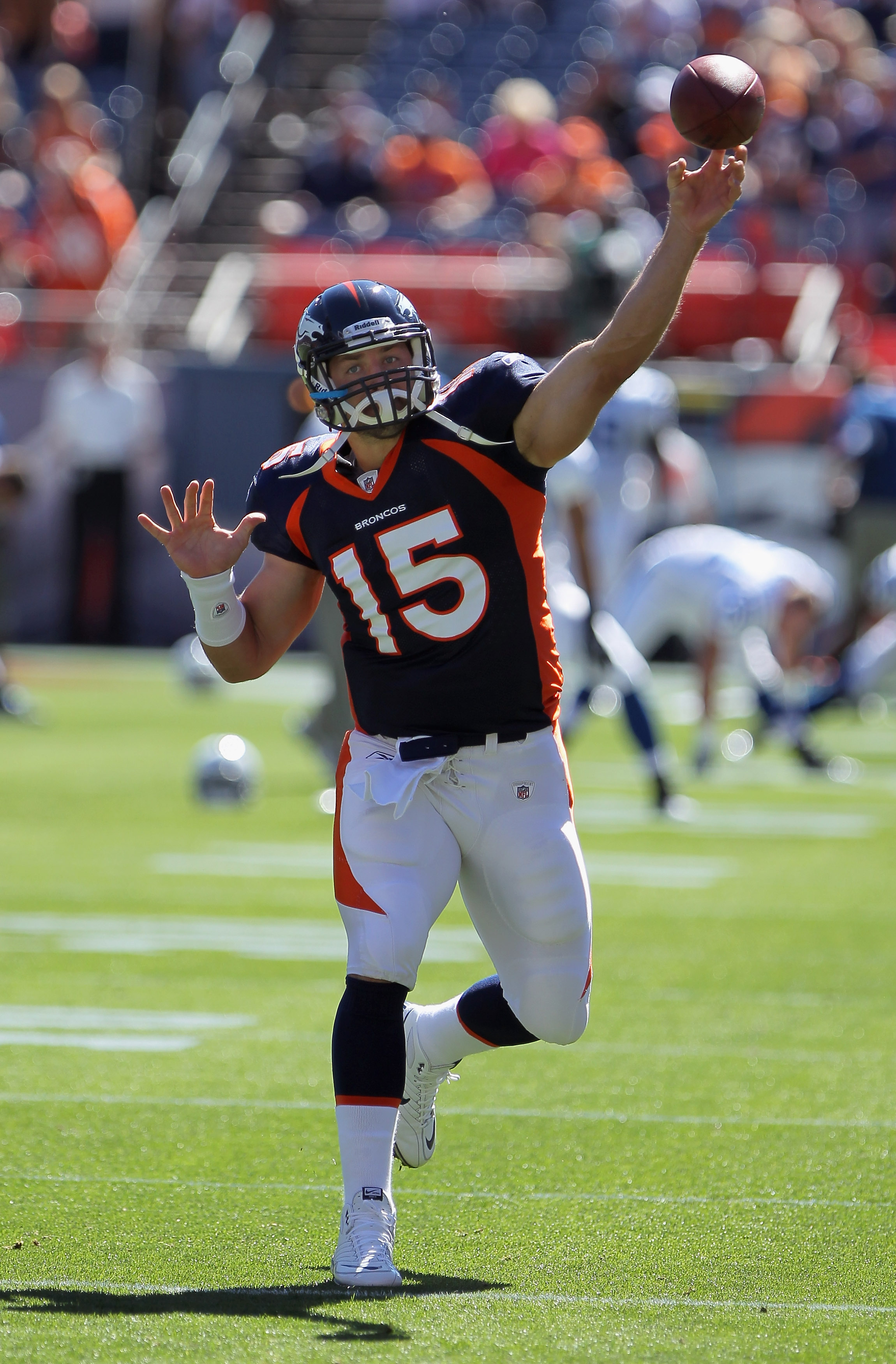 Now, how many times have you heard this one?

"Tim Tebow is a winner" has been the mantra of Tebow's fans since he left the University of Florida, and these fans aren't wrong.

But they make the mistake of using the phrase, like being a "winner" is something you're born with.

Tim Tebow is a winner, not by birthright, but through hard work. This kid takes football very seriously, and he trains, corrects, re-evaluates and repeats during every single practice.

He is his own worst critic, and he genuinely wants to make himself a better player.

6. The Rest of the Team Likes Him 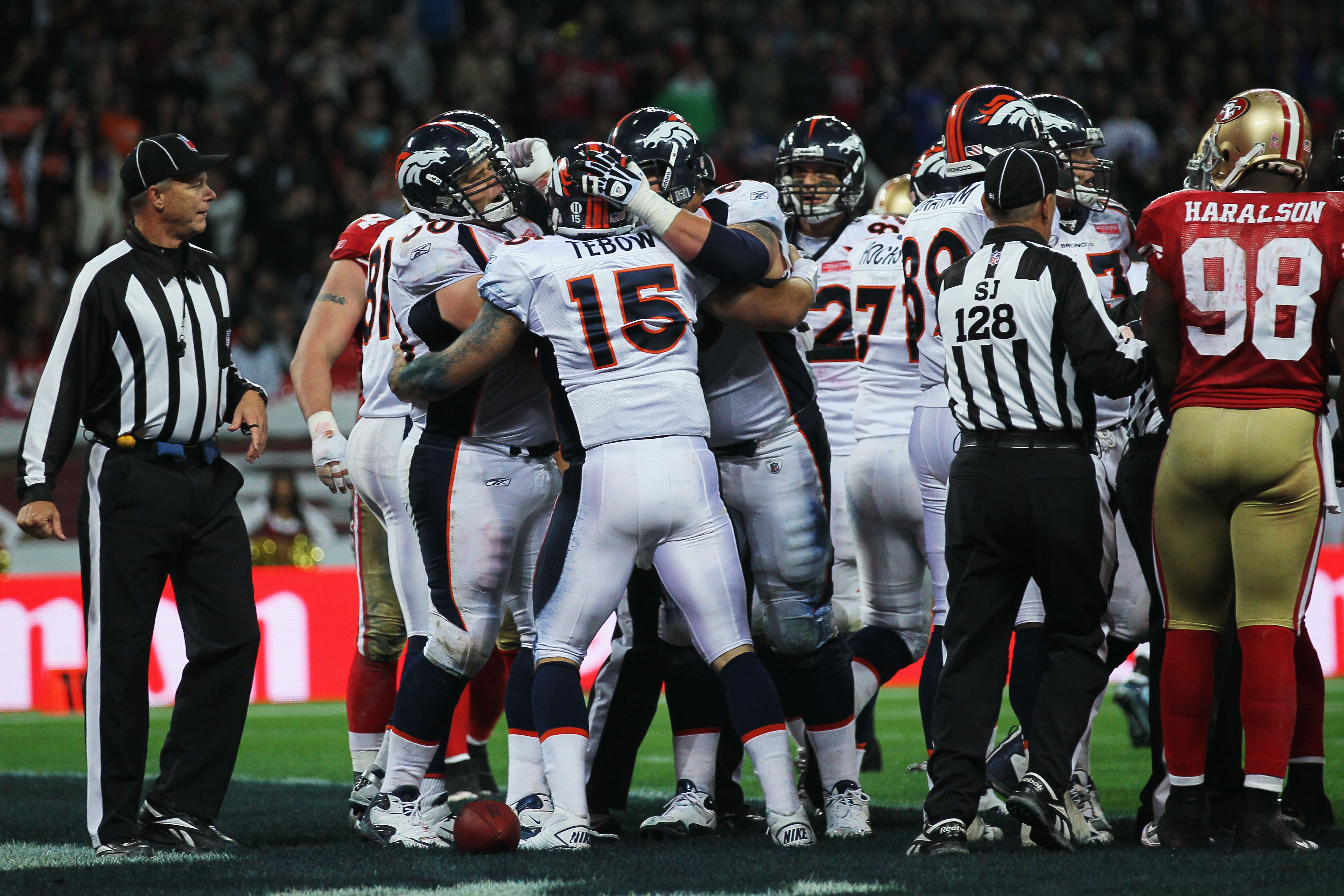 In every workplace, there is always that co-worker that may not be the best at what he does.

He might be a little slow turning in proposals.

But he shows up for work every day and puts in the extra effort in order to get the job done, and everyone in the office respects the hell out of him.

For the "office" of the Denver Broncos, Tim Tebow is that guy.

It is really hard not to like a player who has the entire organization's best interest at heart, and the rest of the Denver Broncos team has come to embrace this rookie. 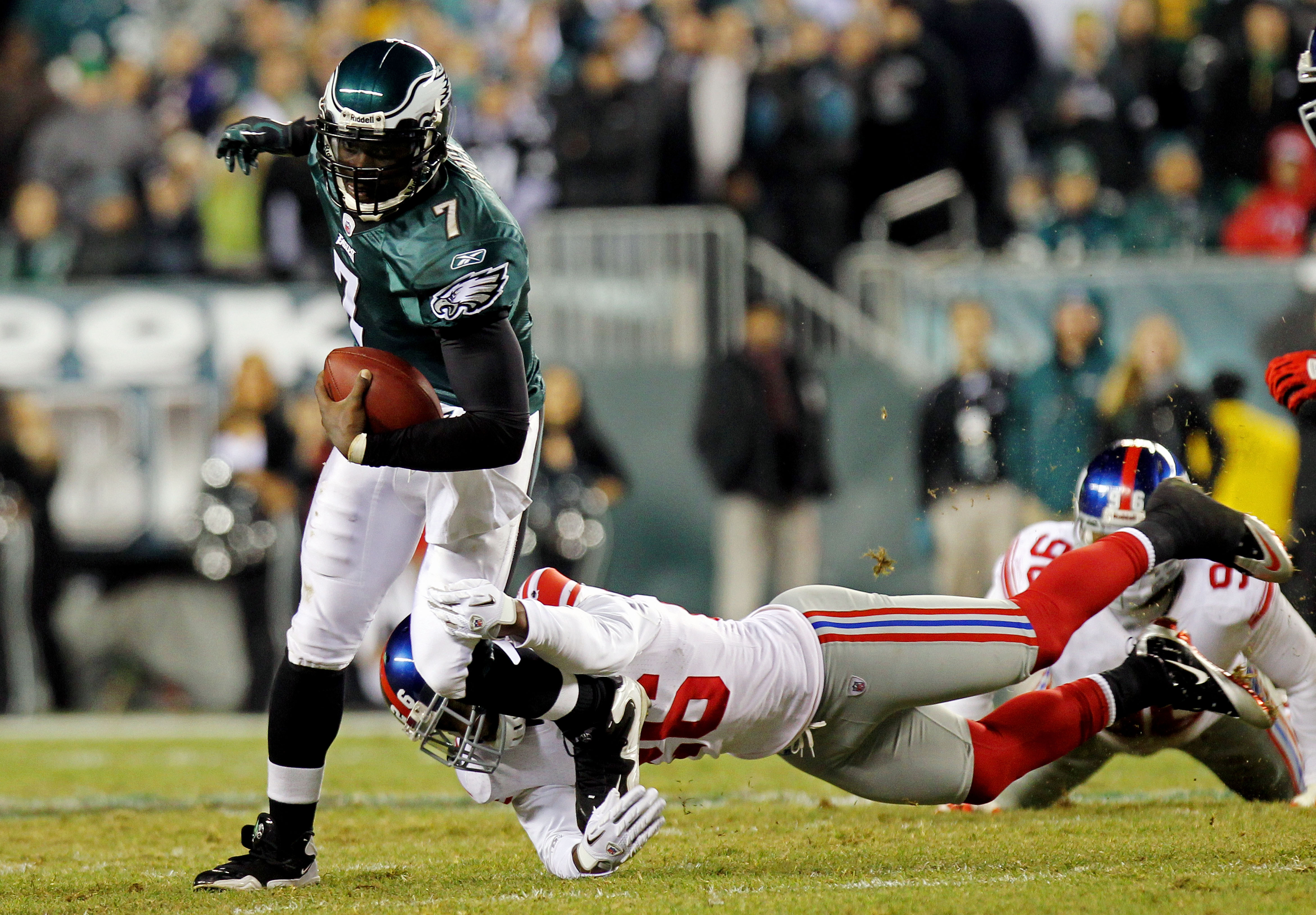 What does Michael Vick have to do with Tim Tebow and the Denver Broncos?

Throughout college football and now in the NFL, we have seen a special kind of quarterback emerge: The "hybrid quarterback." The "jack-of-all-trades quarterback."

Quarterbacks who know how to scramble and use their feet to make the big plays have become much more valuable in the NFL, and Tim Tebow perfected this style of play at Florida.

Other teams in the league have had some serious difficulty containing Michael Vick, and Tim Tebow could bring this same element of surprise to the Broncos' offense. 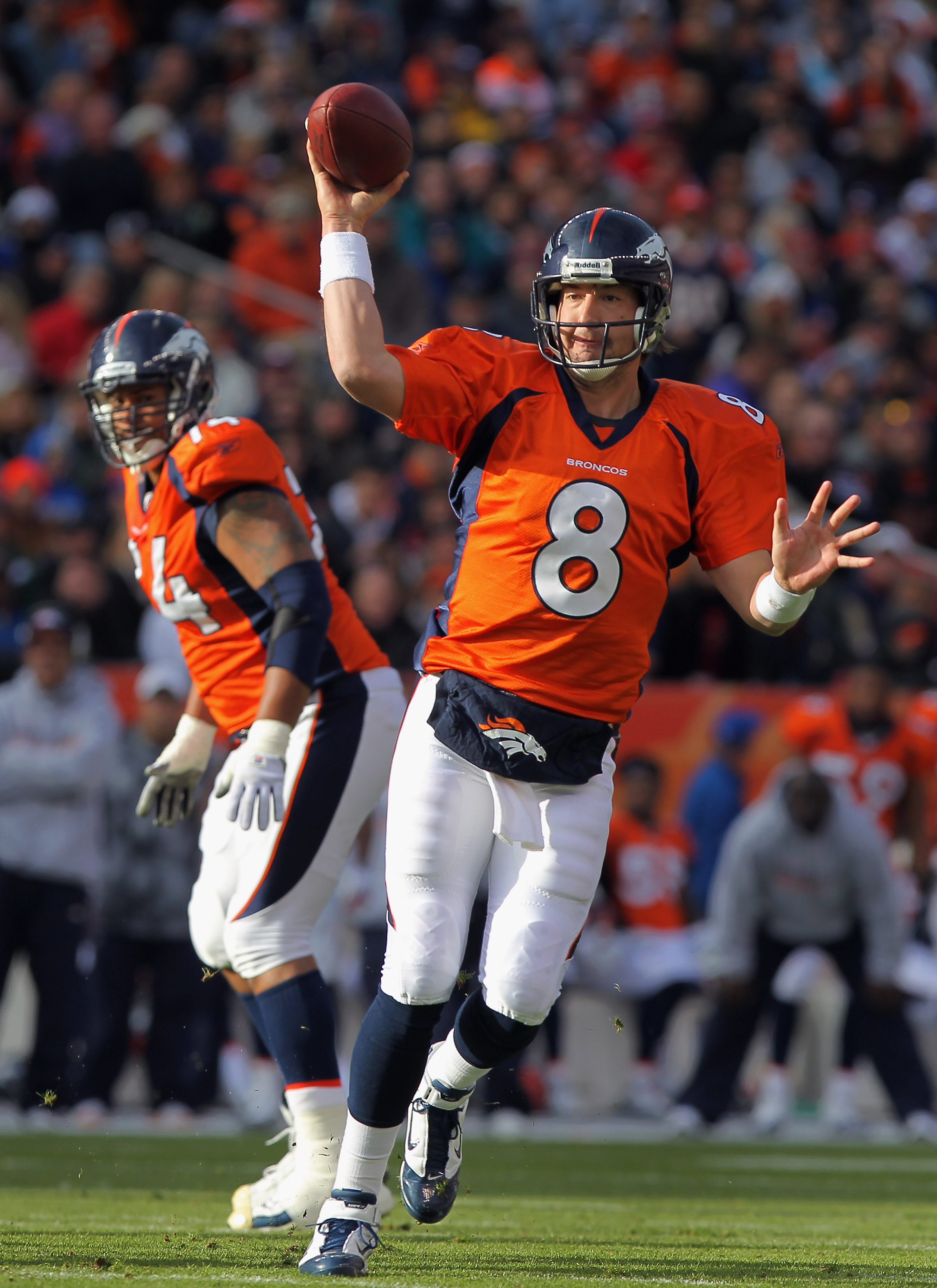 Again, I want to stress that this is not a reflection on Kyle Orton's abilities.

Orton is a good quarterback, but he isn't the answer for the Broncos offense.

He has trouble scrambling and throwing on the run—two things that Tim Tebow is very good at.

The Broncos need to seriously decide on an offensive identity, and I don't see Kyle Orton fitting into the big picture in the future.

3. Playoffs? Don't Count On It 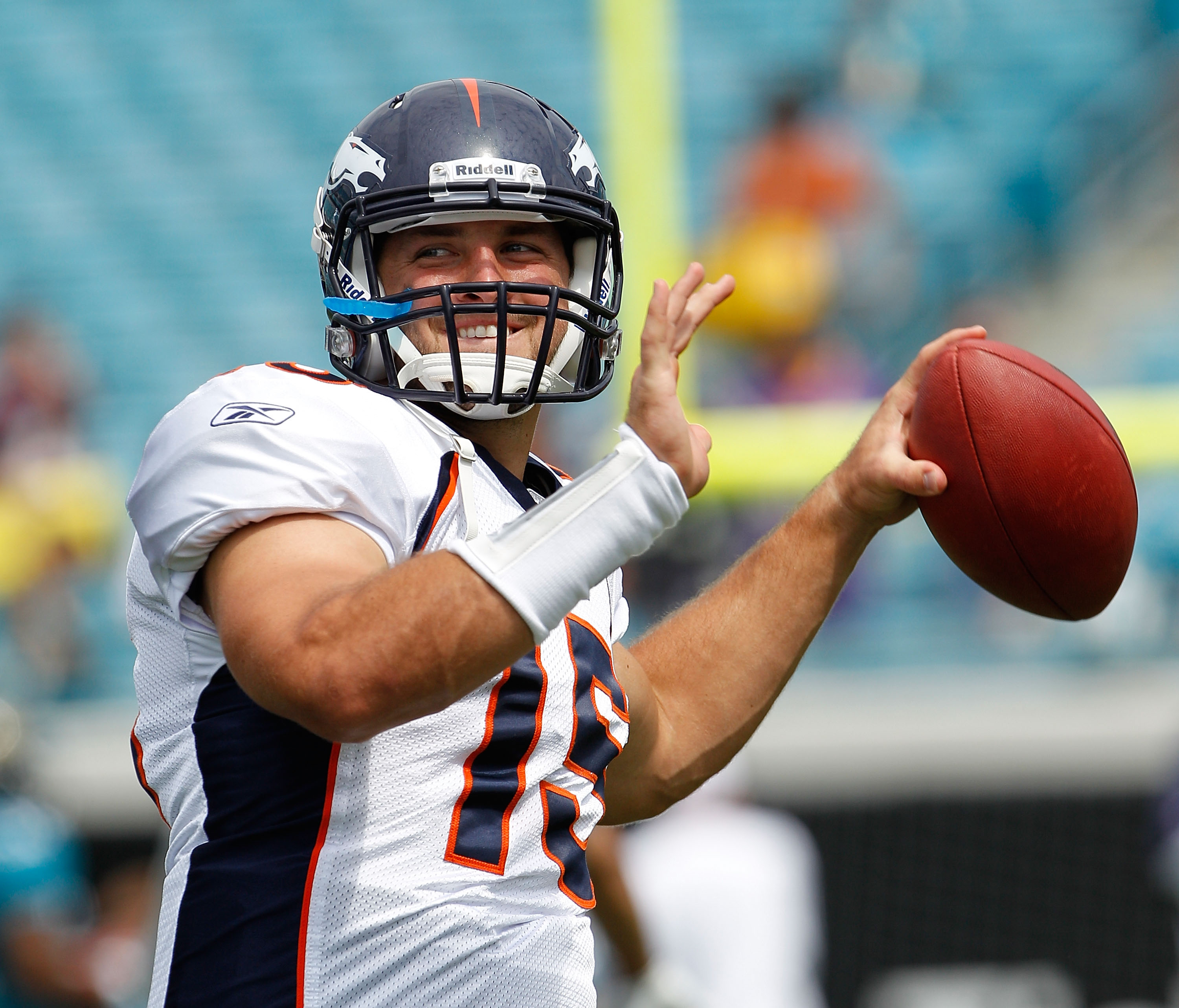 I know that Broncos fans are still clinging to the hope that Denver will still make it to the postseason, but I'm here to provide you with a serious reality check:

Although it would not be impossible for the Broncos to end up in the playoffs, this is extremely unlikely.

As the season progresses, and the Broncos' playoff hopes start to fade, Josh McDaniels will start giving Tim Tebow some serious playing time.

And he will shine.

How do I know Tebow will produce if given the chance? Because he will make sure of it.

2. They Didn't Make the Trade for Nothing 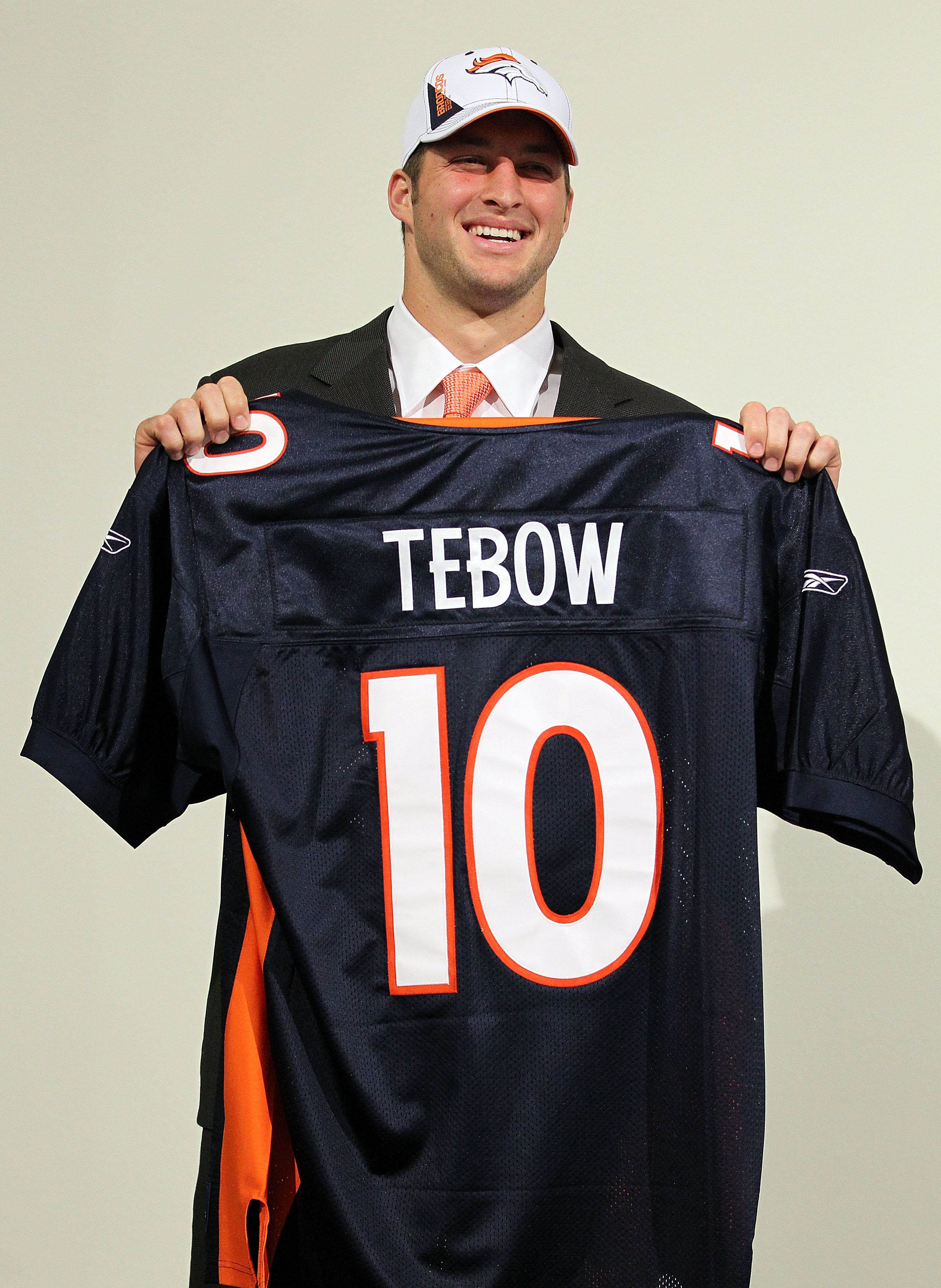 The Broncos' decision to trade their 40th, 70th and 114th picks to take a chance on Tebow was not just some rash decision.

Josh McDaniels has big plans for this young quarterback, and he will implement them by starting Tebow next season. 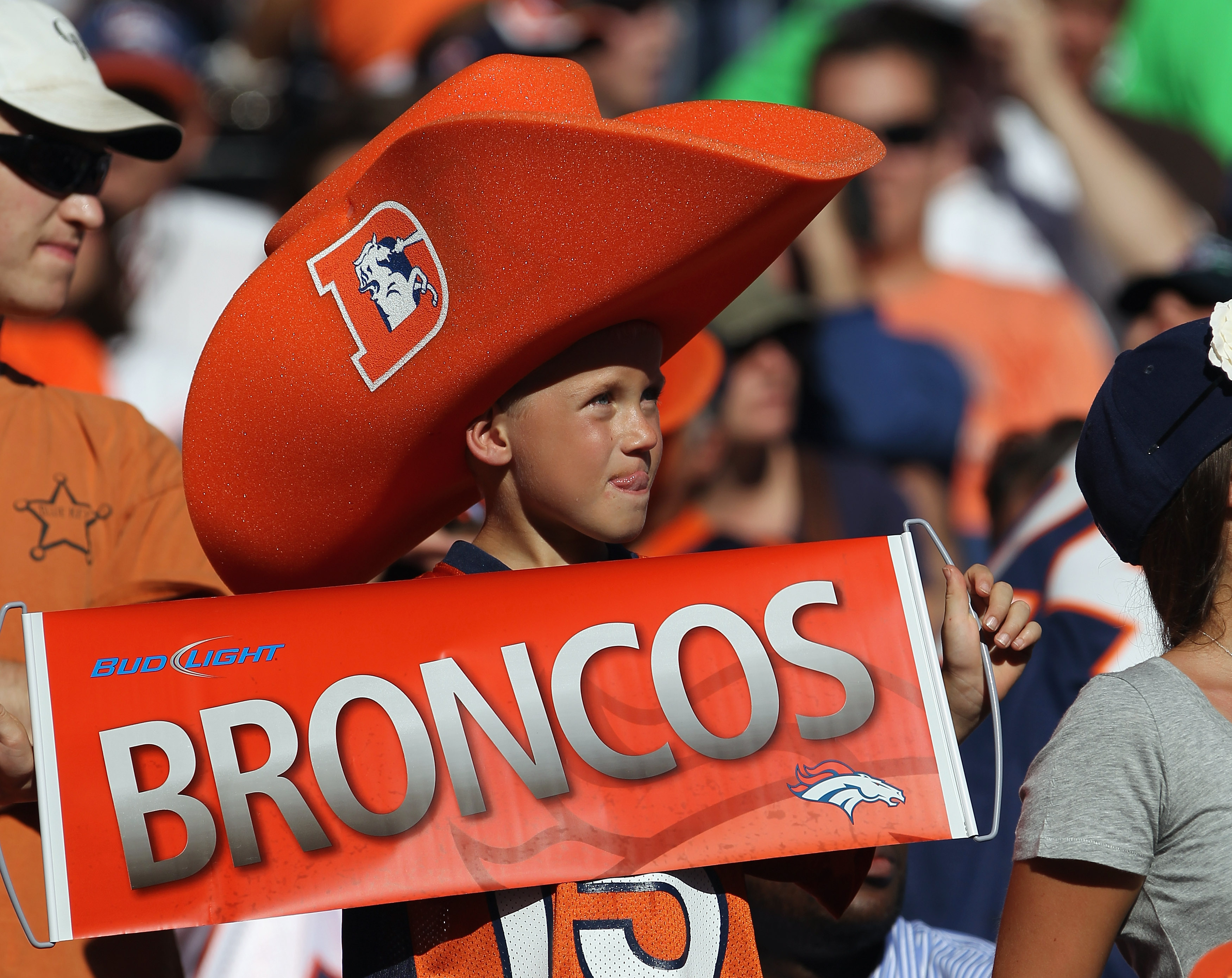 Why do Broncos fans love Tim Tebow so much?

Because he gives them hope.

We have yet to see what Tebow is capable of as a starting NFL quarterback, and fans have been holding onto the hope that he will revive their struggling team.

So, if the Broncos fail to make a miracle playoff run this season, give the fans what they want and start Tim Tebow!