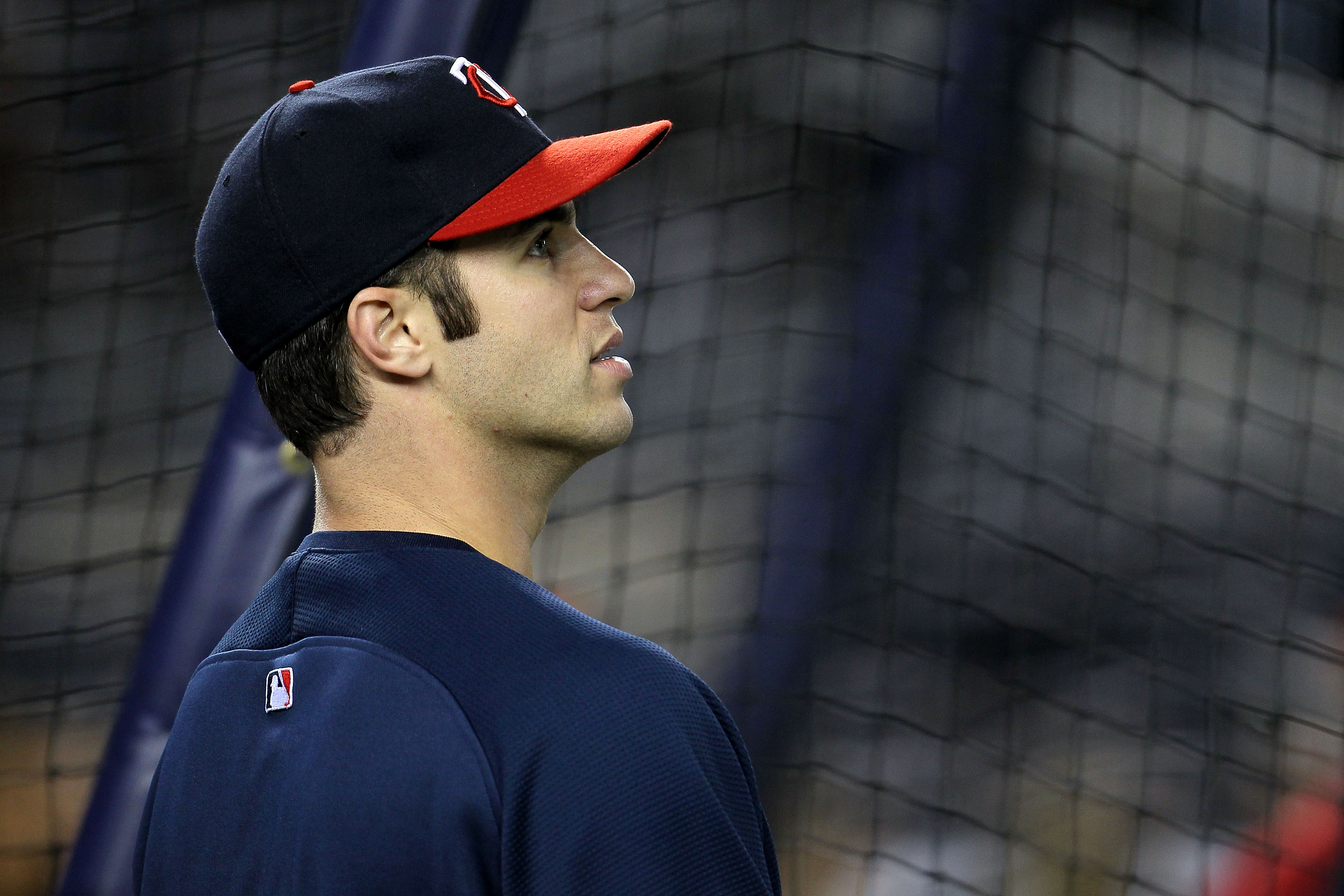 The Minnesota Twins start their 50th season in Minnesota next season.

I thought it might be fun to choose the best starting lineup possible from the last 50 years. I also included the top five pitchers for a starting rotation and a closer.

There were a few rules to make the list. They must have either been a Twins player for at least five years, or done something extraordinary on the field (such as a World Series victory, MVP award, batting title, etc.).

They also must have spent most of their time at the position they played at, so I wasn't allowed to DH someone who wasn't a designated hitter during their time in Minnesota.

So who made the cut? Read on to find out. 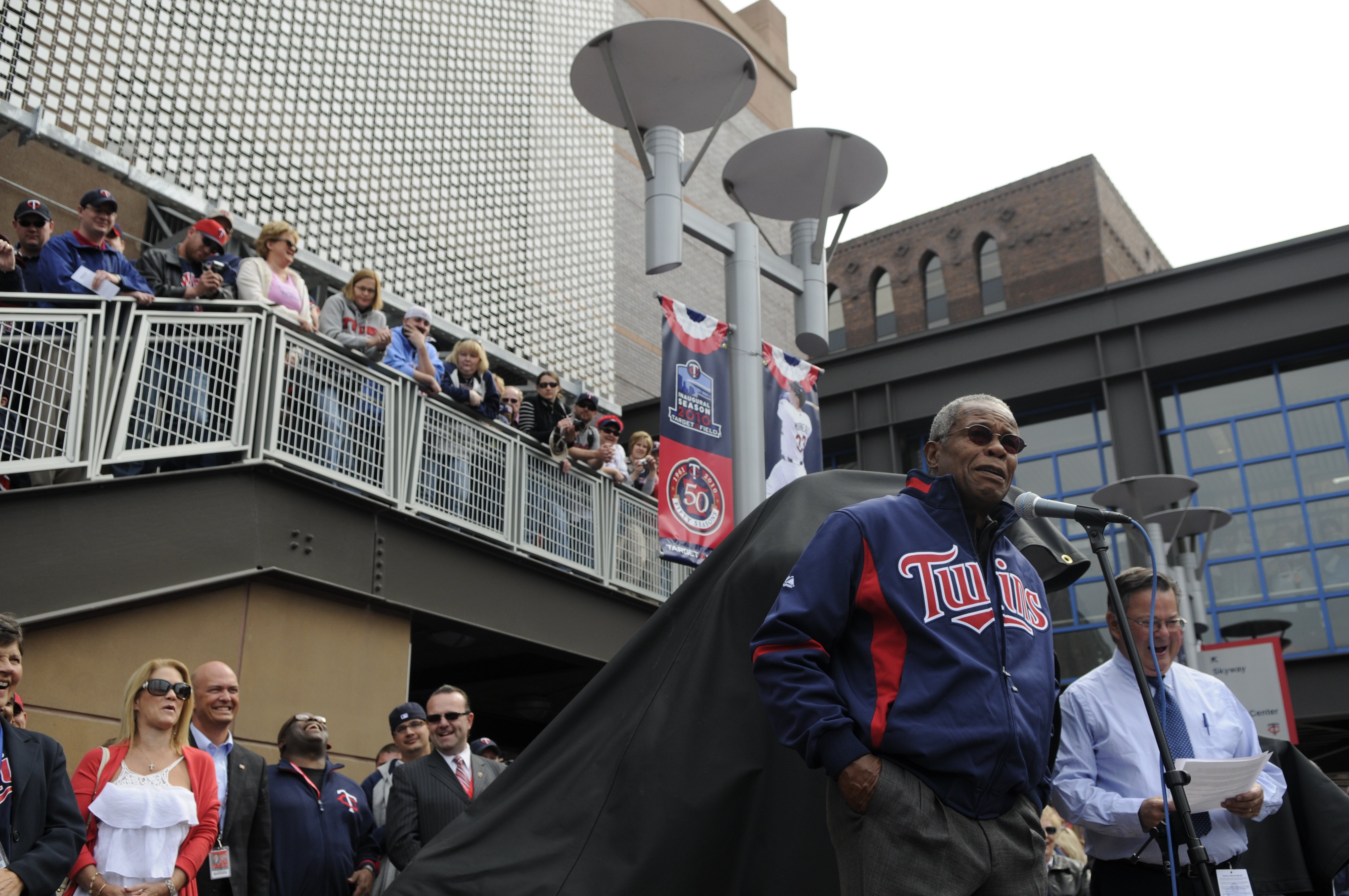 Leading off and playing second base for your All-Time Twins team is none other then Rod Carew.

This was one of the easiest choices on the whole team.

Carew has a laundry list of accomplishments for the Twins:

Carew's number, 29, has been retired for the Twins, and was inducted into the Twins Hall of Fame and also at Cooperstown. 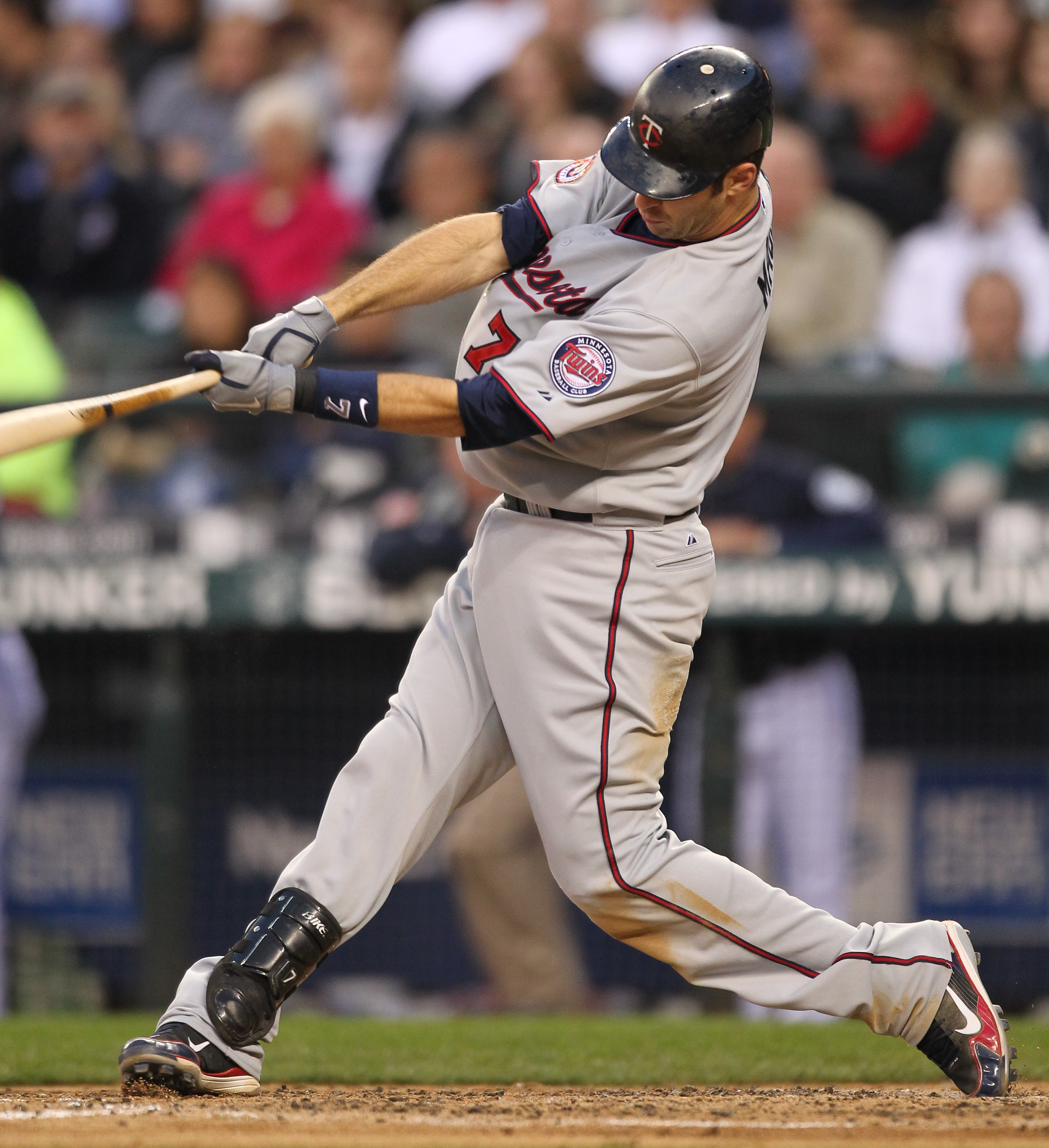 Batting second and catching for your All-Time Twins team is homegrown Joe Mauer.

Another "no duh" selection.

Mauer is the face of the current Twins team and a native to the Twin Cities. He has spent his entire career, since 2004, as a Twin. After signing an eight-year, $183 million contract extension, he may be a Twin for the remaining years of his career.

Even at age 27, Mauer already has accomplished a lot in his career:

It would be hard to find a player who means more to the Twins in their history than Joe Mauer. 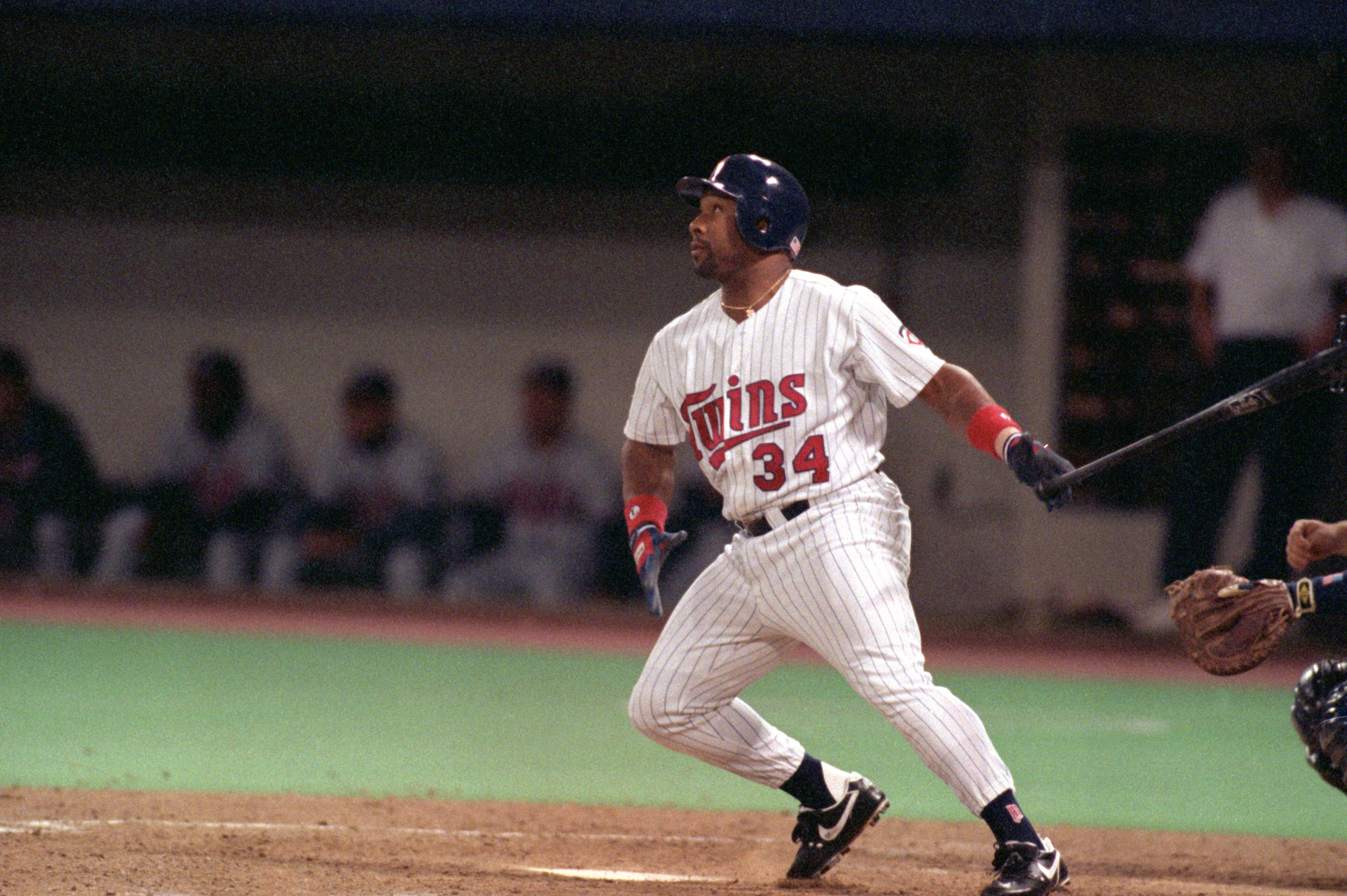 Batting third and roaming center field for the All-Time Twins is Kirby Puckett.

Puckett's accomplishments are tough to define just by numbers. He was the spirit of the franchise and helped deliver two World Series to the Twins in 1987 and 1991.

His heroics in Game 6 of the 1991 World Series alone make him a Minnesota legend. But he is so much more than that to Minnesota.

When ESPN conducted a poll of fans to determine the greatest player in franchise history for every team, Kirby Puckett won the vote in a landslide. This was a testament to Puckett's popularity in Minnesota. The vote was even more telling in who he beat in the voting: Walter Johnson. Walter Johnson, to many, is the greatest pitcher of all time. Yet Kirby Puckett was the overwhelming choice.

Puckett's popularity was due to his charisma and smile, but he also was able to produce Hall of Fame numbers in his 12 years in Minnesota, despite his 5'8", 230-pound frame.

Puckett was forced into early retirement, but was still a first ballot selection for the Hall of Fame.

Puckett was inducted into the Twins Hall of Fame, and his number 34 is retired. 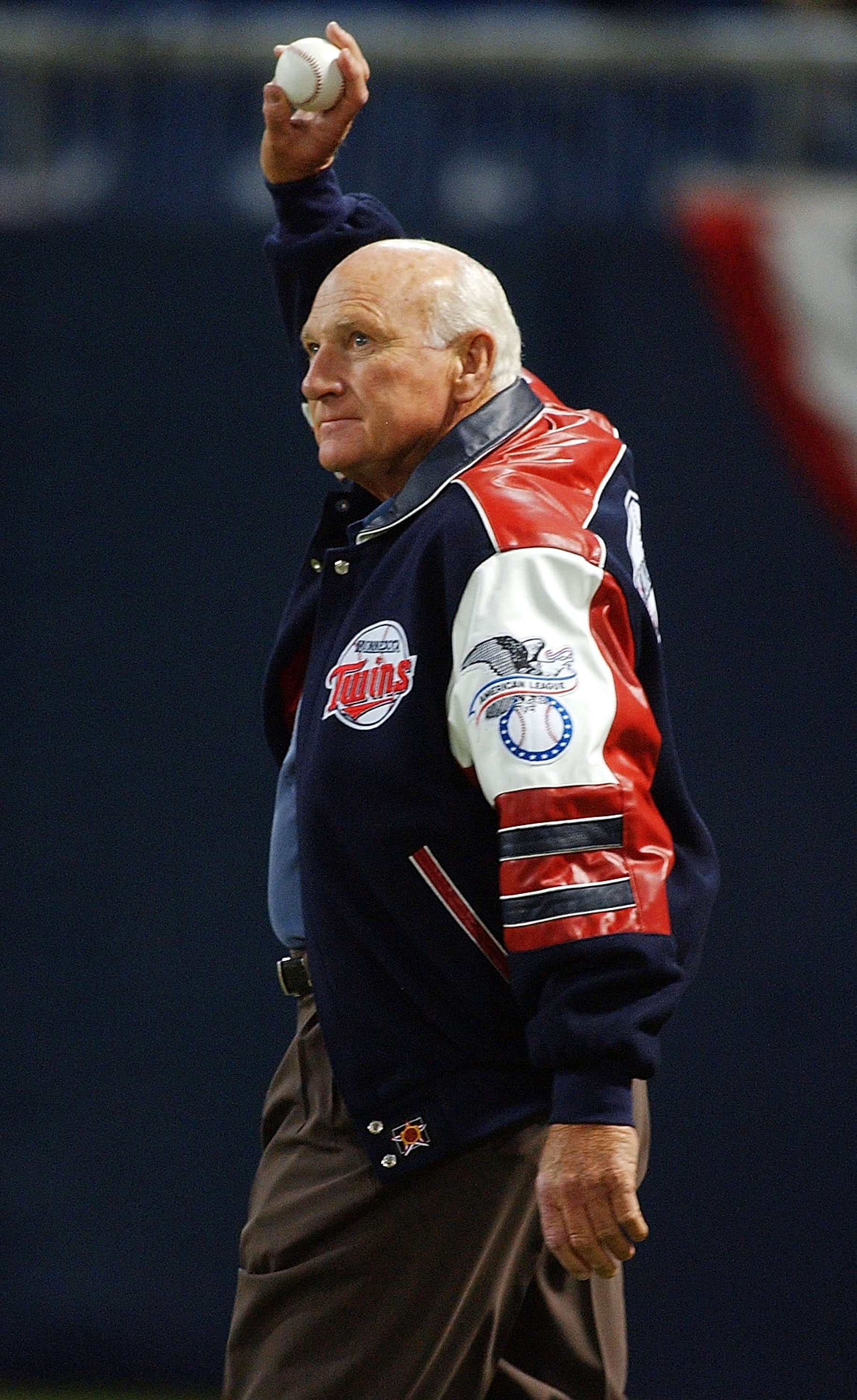 Batting clean up and playing left field for the All-Time Twins team is Harmon Killebrew.

The Hall-of-Fame slugger came to Minnesota when the team was moved from Washington. He remained with the Twins until 1974.

In his 20 years with the Nationals/Twins, he put up amazing numbers:

Killebrew helped push the Twins to the 1965 World Series. Sandy Koufax shut down the Twins in Game 7 that season, but still is remembered as one of the great seasons in franchise history.

Killebrew was inducted into the Hall of Fame in 1984.

Killebrew is a member of the Twins Hall of Fame, and his No. 3 is retired. 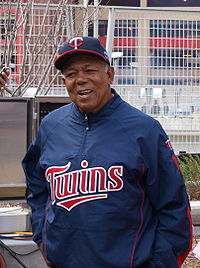 Tony Oliva makes an easy decision for the right field position on the All-Time Twins team and will bat fifth.

Over his career, Oliva had many great seasons:

Tony Oliva is a member of the Twins Hall of Fame, and his No. 6 has been retired. 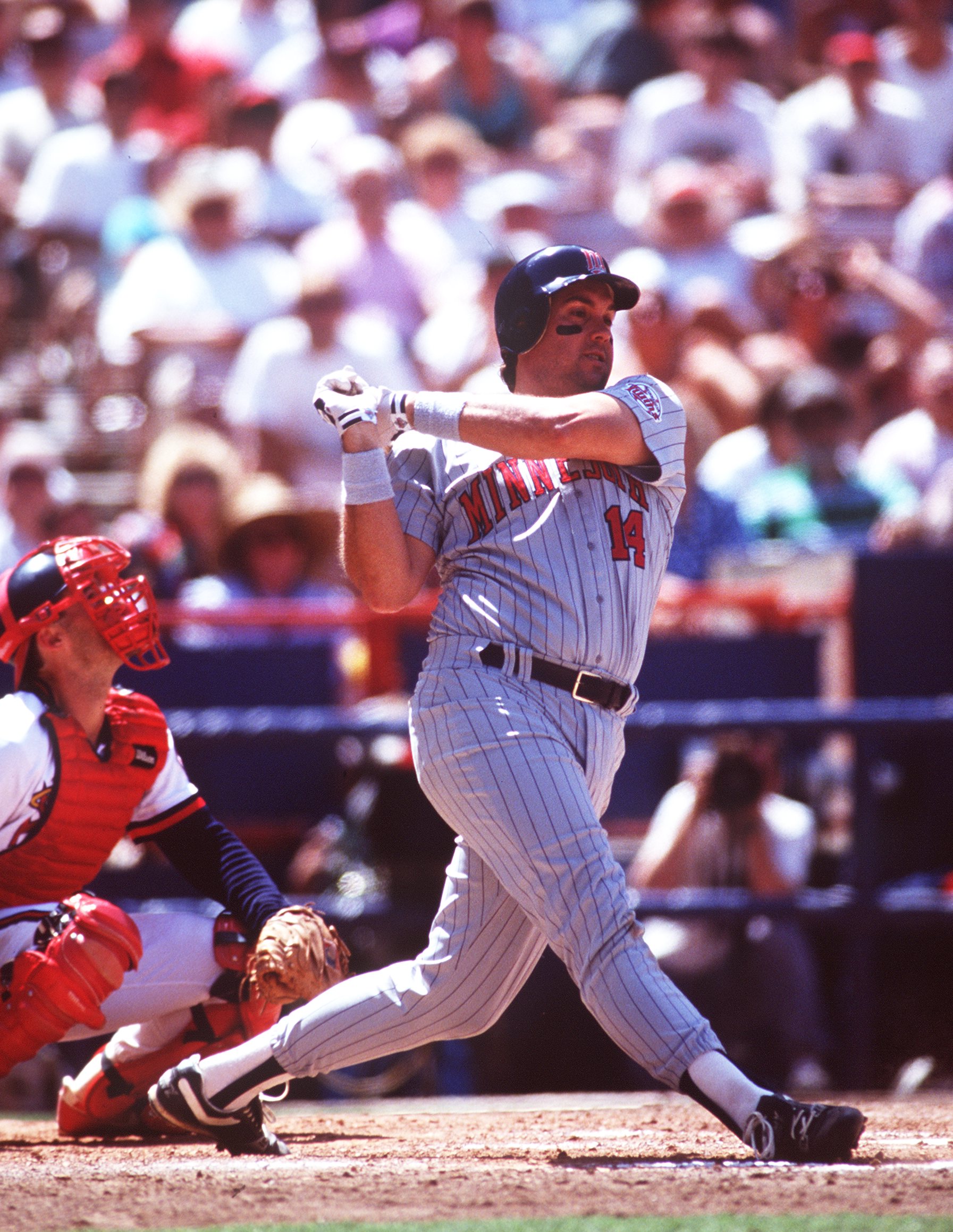 Kent Hrbek takes the spot at first base for the All-Time Twins and bats sixth.

This was perhaps the most difficult selection to make. Hrbek doesn't have gaudy numbers, was never an MVP, never won a batting title, never won a gold glove and only has one All-Star appearance, but his value goes beyond numbers.

Hrbek is a Minneapolis native and was a crucial part of both of the franchise's World Series titles. He spent his entire career with the Twins from 1981-1994.

Hrbek gets the nod over Justin Morneau due to the titles, the local hero status and his continued involvement in the Twins, despite his playing days being over.

Hrbek was no slouch on the diamond, however.:

Hrbek is a Twins Hall of Famer, and his No. 14 has been retired. 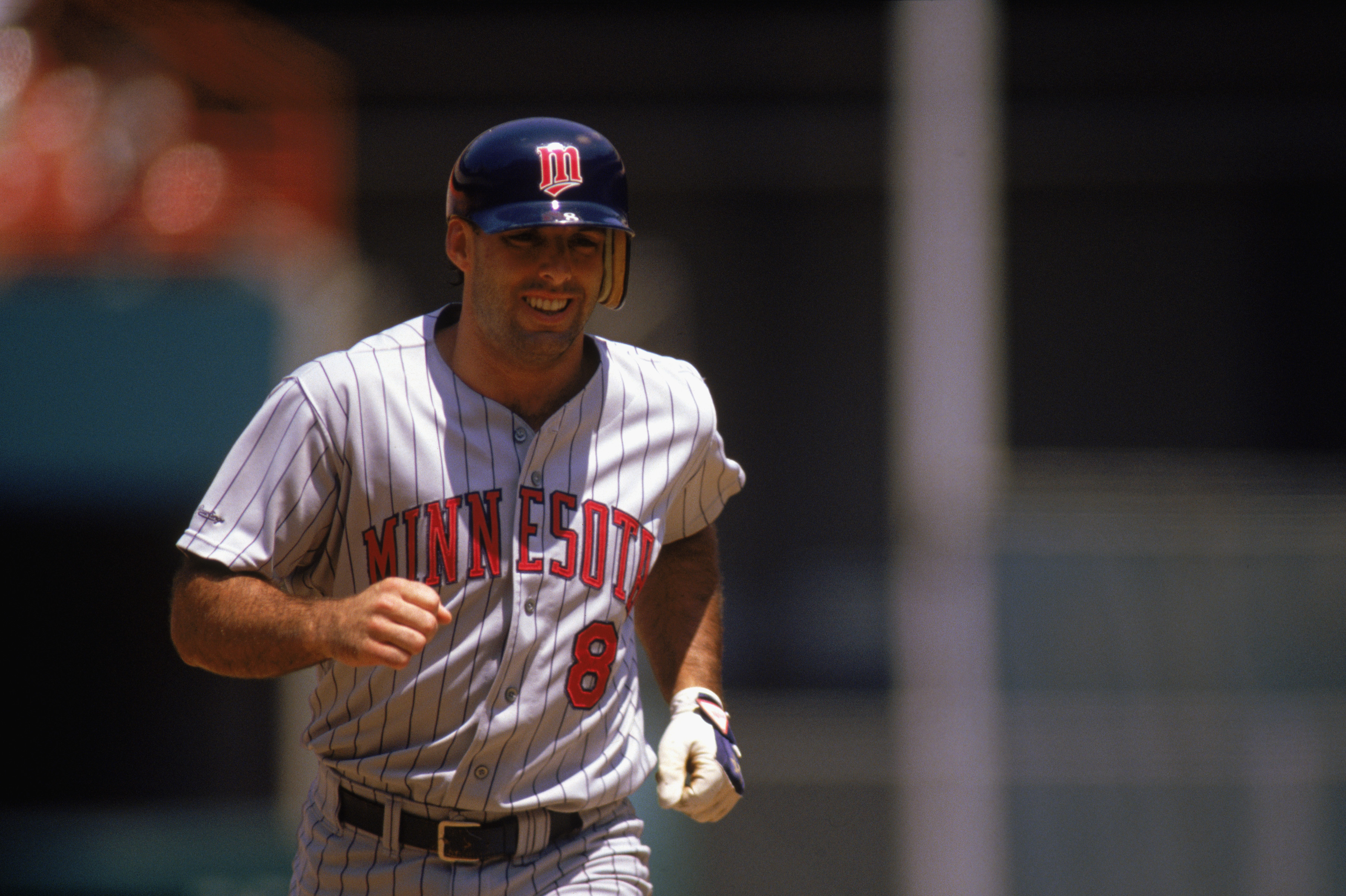 Gary Gaetti is the All-Time Minnesota Twins third baseman and will bat seventh.

He played for the Twins from 1981-1990. Gaetti helped anchor the left side of the infield for a decade, and was a key part of the 1987 World Series winners.

Gaetti had a very solid career:

In 1987, Gaetti became the first player in history to homer in his first two plate appearances in the postseason.

Gaetti is a member of the Twins Hall of Fame. 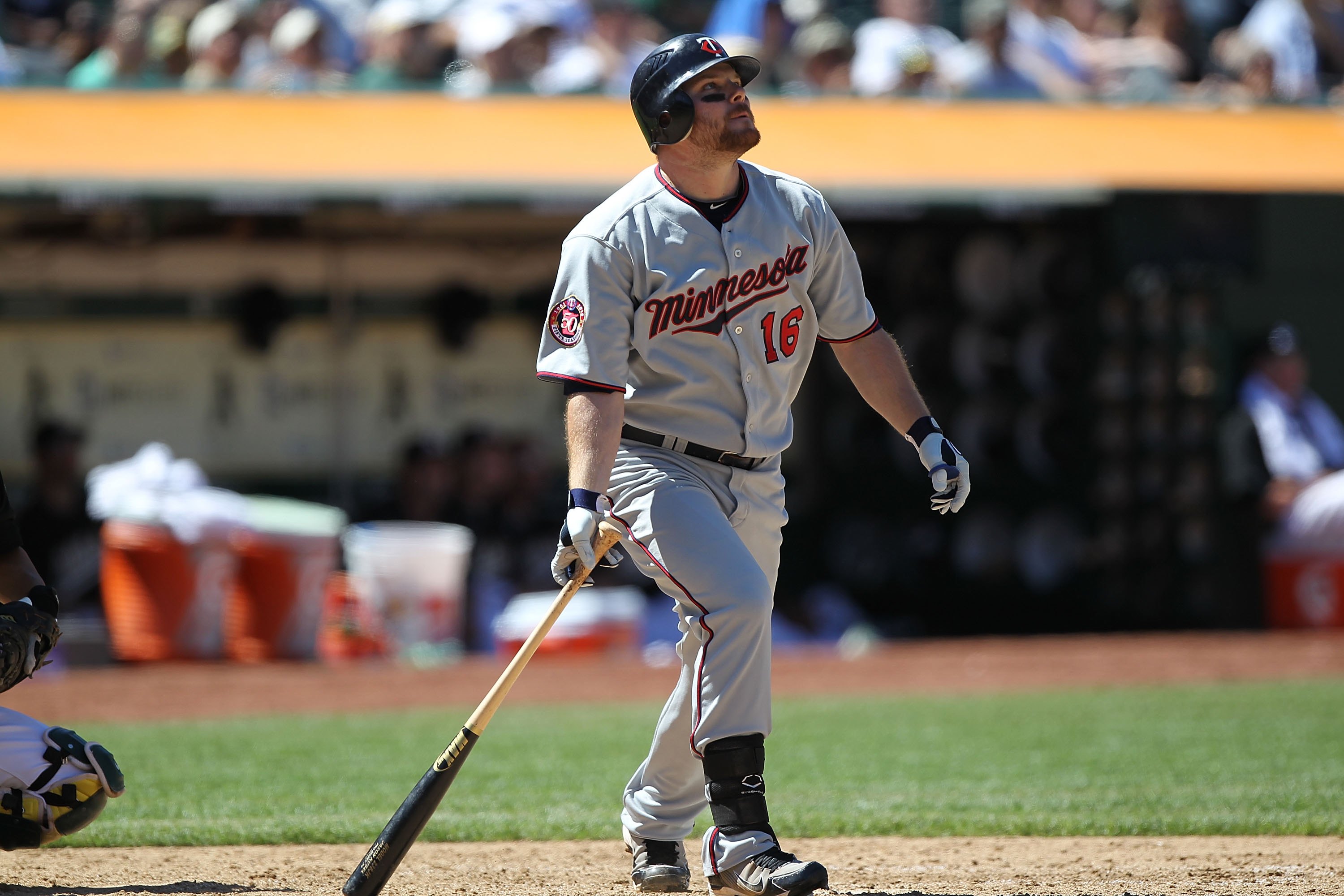 Jason Kubel is the designated hitter on your All-Time Twins team and bats eighth. Kubel has spent his entire career as a Twin, dating back to 2004.

Despite his struggles in the postseason, Kubel has had some of the most clutch hits for the Twins in the last half decade.

Kubel wins out the position with very little competition. 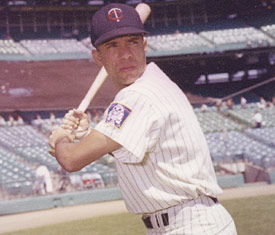 Zoilo Versalles makes the cut as the All-Time Twins shortstop and will bat ninth.

Versalles came over from Washington and played for the Twins from 1961-1967. He was one of the most important players in the 1965 pennant-winning Twins.

Versalles's career could have possibly been more impressive but he still had some great accomplishments:

Versalles has been inducted into the Twins Hall of Fame. 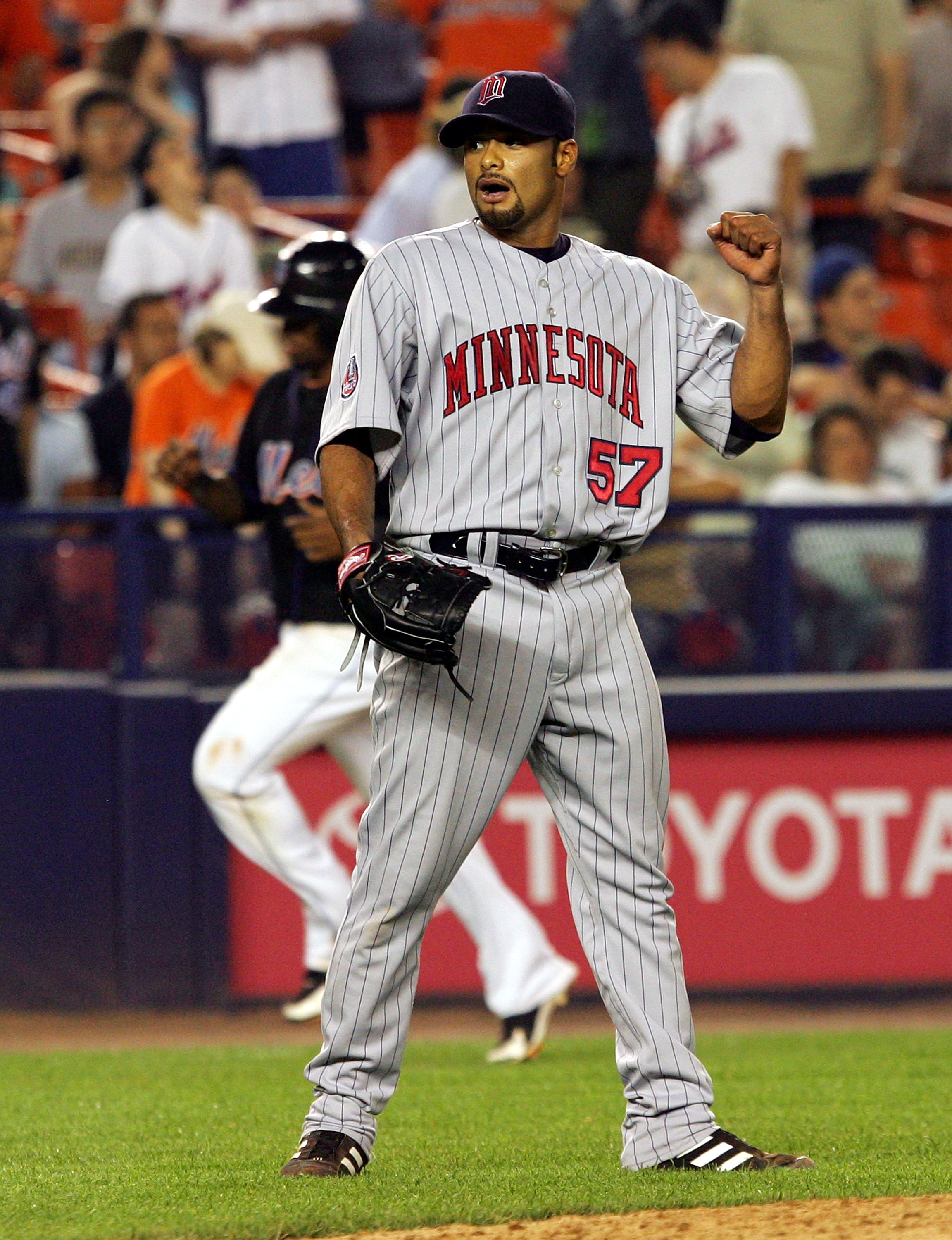 Johan Santana pitches his way to the ace position on the Twins' All-Time team.

During his career in Minnesota, Johan Santana became known as the best pitcher in the American League with a mid-90's fastball and the best change-up in baseball.

Minnesota has been looking for another ace like Santana since he departed for New York after the 2007 season. 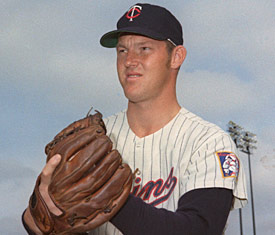 Jim Kaat solidifies the second spot in the rotation for the All-Time Twins.

Kaat was a great pitcher during the 60's and 70's, but he might be more known for his defensive abilities. He currently ranks second all-time for Gold Glove awards won by a pitcher with 16.

Kaat was the best pitcher on the Pennant-winning 1965 Twins squad. He matched up three times in the World Series against Sandy Koufax. Losing Game 7, but pitched a complete game 5-1 win in Game 2. 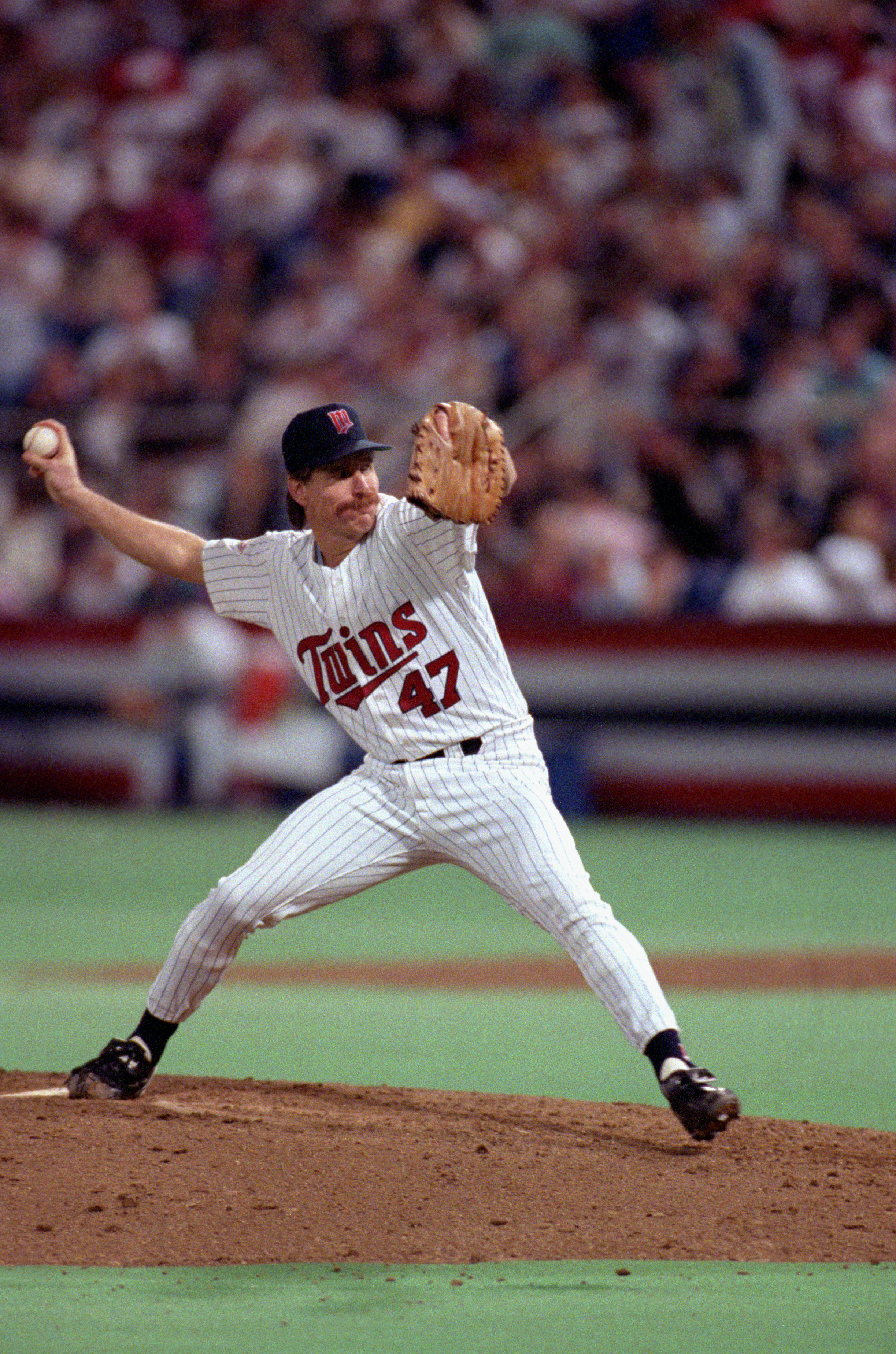 "Black" Jack Morris only spent one season in Minnesota, but it was memorable. Game 7 of the 1991 World Series goes down as perhaps the greatest postseason pitching performance of all time. Ten innings of shutout baseball to win the game and the series.

This would be the last game for Morris as a Twin, but that game alone lands him on the All-Time Twins team.

Frank "Sweet Music" Viola comes out at the fourth spot in the rotation for All-Time Twins team.

Viola's career in Minnesota was defined by 1987 and 1988. In 1987, he pitched the Twins to a World Series victory, and a year later had the best season of his career. He was then traded to the Mets, which helped the Twins bring in players who would eventually win the 1991 World Series.

Viola was also credited with inventing the circle change-up, which would pay off years later when Johan Santana perfected the pitch. 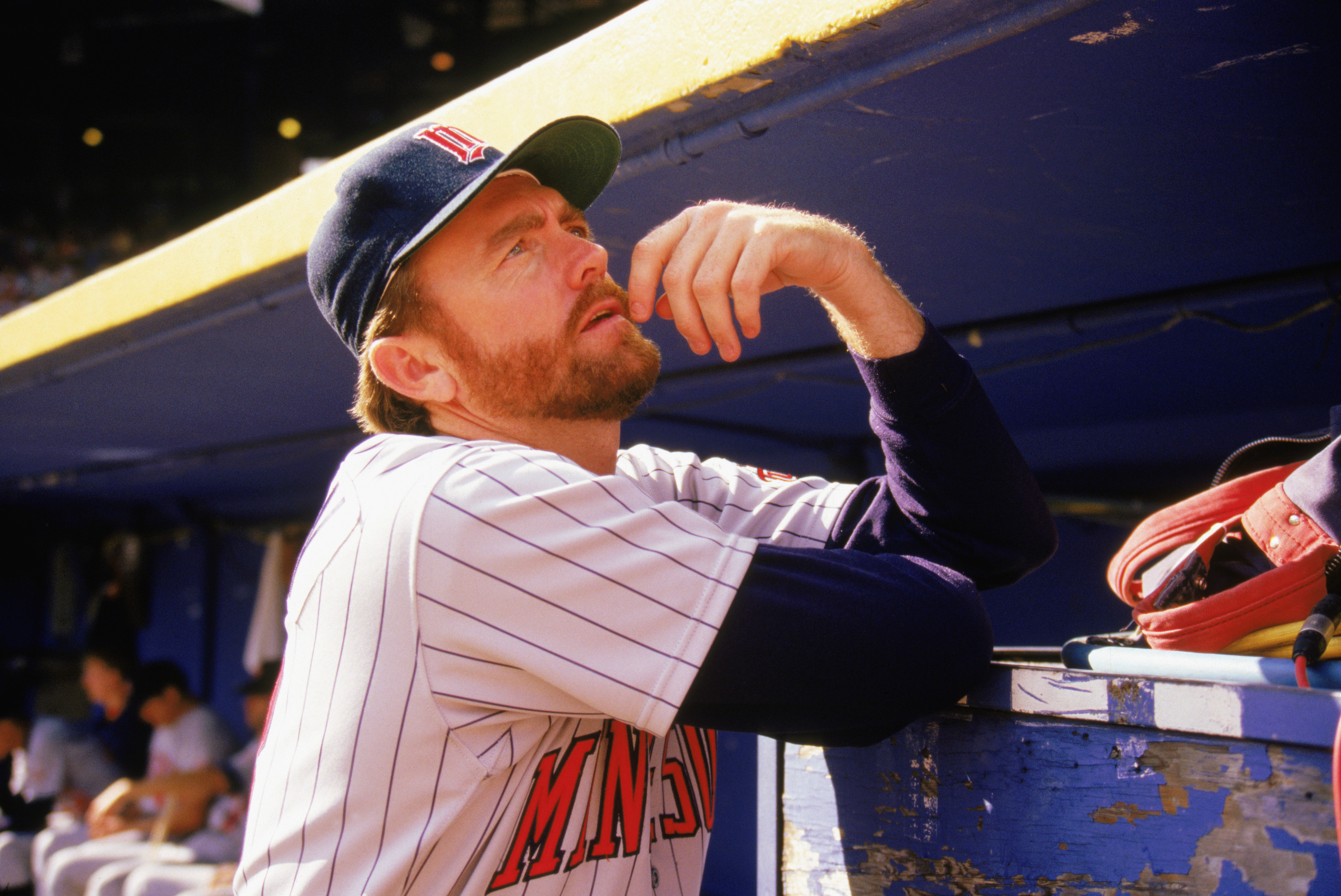 Bert Blyleven rounds out the rotation as the fifth starter.

Blyleven was the No. 2 starter on the 1987 World Series winning  team. He was just shy of making it into the Hall of Fame on the last round of voting, and it may be just a matter of time before he is inducted.

Blyleven was known as a prankster in the dugout, perfecting the "hot foot" where he would light teammates shoelaces on fire. 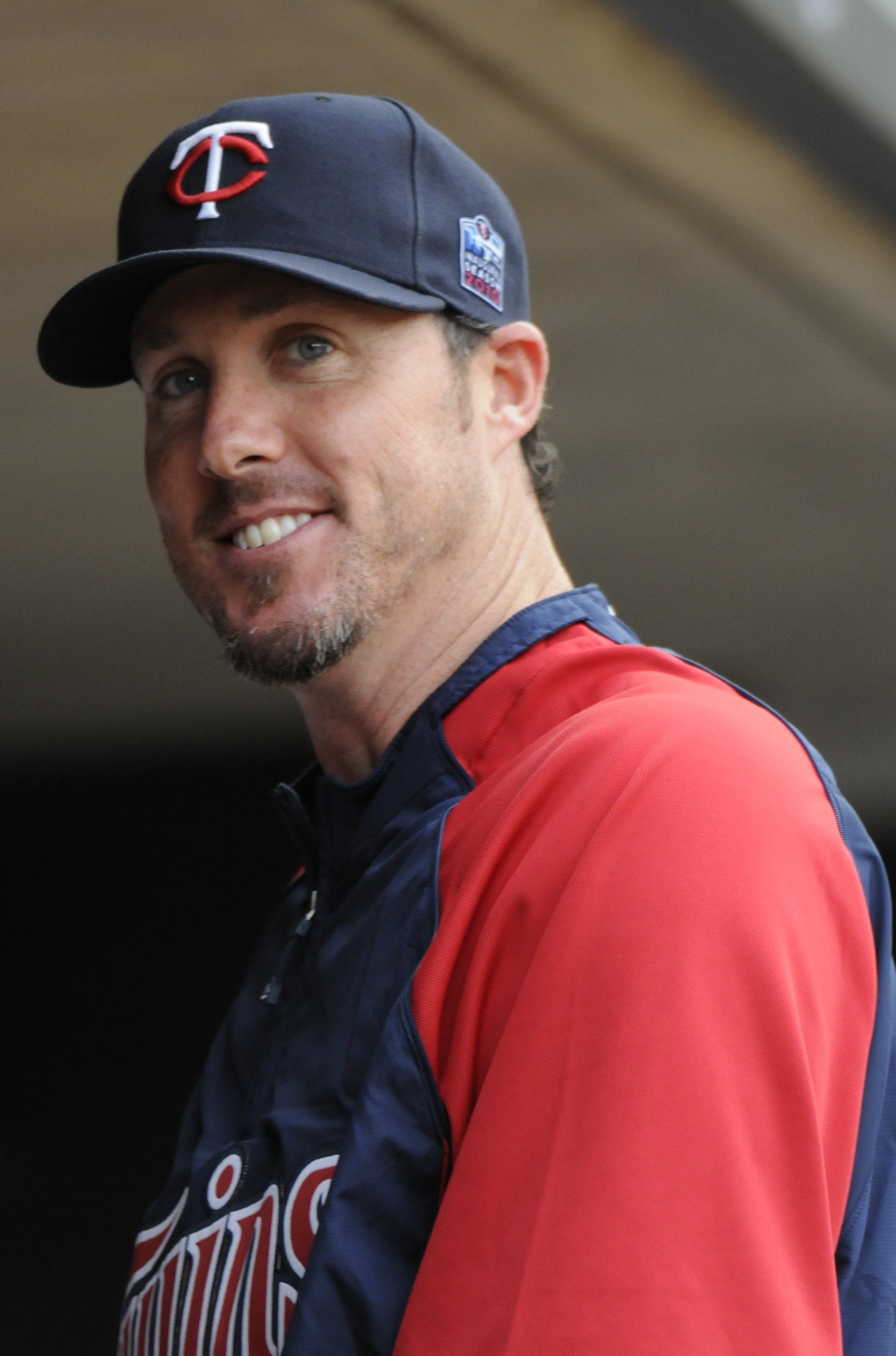 Joe Nathan anchors the pen for the All-Time Twins team.

Nathan was just shy of the franchise record for saves when he was injured last spring training, and it's almost inevitable that he will pass Rick Aguliera for the lead next season.

Nathan hasn't been a postseason star, but his numbers in the regular season are too great to ignore. 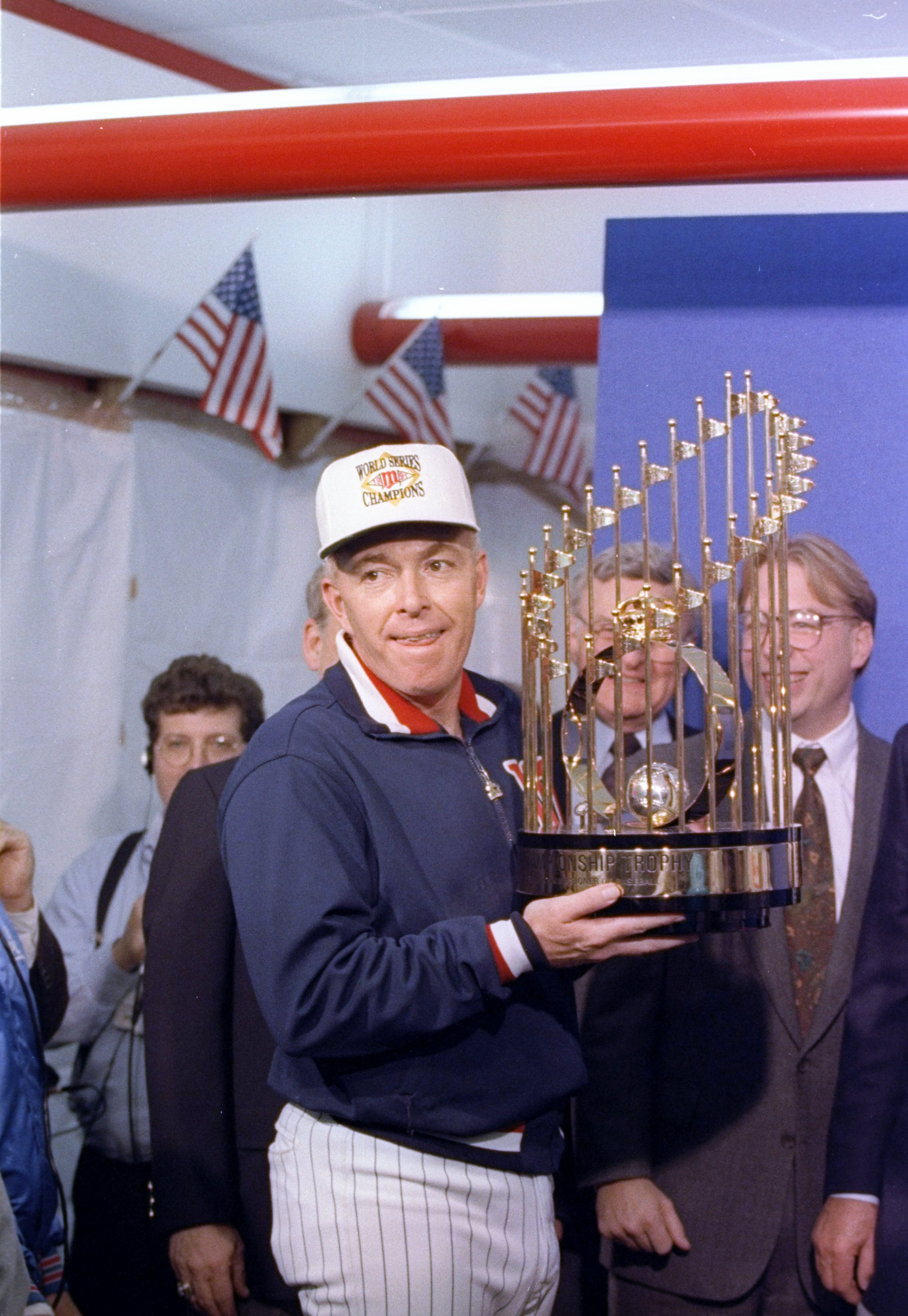 Tom Kelly is the skipper on your All-Time Twins team.

He took over the reins of the Twins in 1986, and only a year later would bring home a World Championship. He would win another in 1991. He was the longest tenured manager in Twins' history, managing until 2001 when Ron Gardenhire would take over.

The years after the 1991 World Series weren't kind to Tom Kelly's Twins. Departing superstars led to a run of disappointing seasons.

Tom Kelly became one of the men in charge of rebuilding the Twins into contenders. He and general manager Terry Ryan laid the ground work for the current model of Twins baseball, which continues to this day.

In Kelly's final season, the Twins won 85 games and were set for a decade of excellence.