When you think of great college football rivalries, what comes to mind?

After Houston Nutt darted a border over to Mississippi to be the head coach for the Ole Miss Rebels, Arkansas fans haven't been happier, but for some reason the bitterness of his departing to another SEC school is evident by action.

I have written several Houston Nutt articles, one basically begging Arkansas fans to comment (see Houston...We Don't Have a Problem), but lately my articles have pertained to the state of the Ole Miss football team.

Whether it be Arkansas fans still bitter over my article or their desire to comment on their old coach's new team, there never seems to be any shortage of comments from Arkansas fans.

Don't believe this will be the next great college rivalry? Check a lot of the Arkansas boards. You'll find on most of them a season kickoff countdown and another countdown. I saw one the other day that stated: Houston, You Have a Problem!

Obviously, below that text was a countdown until October 25th, marking Houston Nutt's return to Fayetteville.

What would be more classic than to see Arkansas and Ole Miss come into the game, both around four or five wins at the time, needing the win for a shot at a bowl game in '08?

It may not mean more to Ole Miss fans, but don't get them wrong—they're pretty protective of their new coach. You'll see many fans pulling out stats from past Arkansas teams to back their belief that Houston Nutt can pull off something great in Oxford and maybe get them to Atlanta for the first time.

Many people are already declaring it "The Nutt Bowl", you get the picture why.

So my question is, what fuels a rivalry? I listed controversy. I would say another would be history. The history of Ole Miss and Arkansas is definitely there, of course.

They both play in the SEC West and play each other each year. If you didn't know, in 2001, Ole Miss and Arkansas went to 7 OTs, with the Razorbacks and overtime expert Houston Nutt pulling out the W late, and I mean late.

So, we now have controversy and history. What else defines a rivalry?

I guess the final thing that would define a great rivalry would be the fans. Who else can decide? Arkansas fans, whether you like them or not, are about as passionate about their football as any fans I have seen. Who else would have the nerve to fly a plane over their stadium carrying a banner that said "Ain't Nuttin' Better than 0-3 in the SEC".

Again, whether you agree or not, that takes guts. It might've been why the leave at Arkansas for Houston Nutt was mutual.

In a recent interview with FOXSportsNet during Ole Miss's Season Preview broadcast, Houston Nutt said, "When you defeat LSU at LSU and some people are still not satisfied, it's probably time to go".

Ole Miss fans love it, too. This time they're on the right side of the SEC West carousel. 10 years ago, Tommy Tubberville, Ole Miss's head coach at the time, darted for Auburn. Unlike Houston Nutt though, Tubberville never left formally, even saying he would never leave Oxford weeks before his departure.

“They’ll have to carry me out of here in a pine box” he said.

That rivalry has sort of died down, as many Ole Miss fans don't exactly have it circled on their calendar every year. But, when that Auburn game week comes, you always hear Ole Miss fans, wherever they are discussing the game, making Tubberville the center of their conversation, reliving his departure every year.

So, will Arkansas and Ole Miss become a huge great college football rivalry? Bobby Petrino now enters the scene at Arkansas, having to revamp the team to high expectations set by fans and administration as soon as he set foot on campus.

Ole Miss and Arkansas fans, have October 25th circled down. It might be the start of something good. 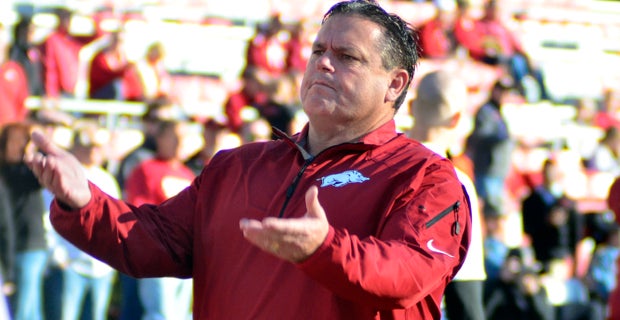