Seattle Seahawks Vs. Oakland Raiders: 10 Keys For A Raider Win Over an Old Rival 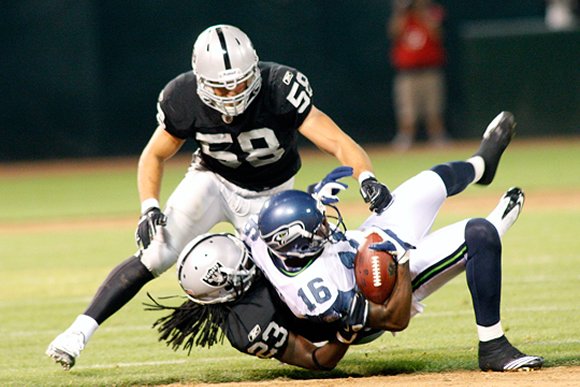 This Sunday will mark the second meeting of the Raiders and Seahawks this year.

The Oakland Raiders are riding high after the complete destruction of their hated rival, the Denver Broncos, last Sunday.

This week, the Seattle Seahawks come to Oakland County Coliseum to take on Darren McFadden and the resurgent Raiders.

The Seahawks are a greatly improved team that is well on its way to becoming relevant again. The Raiders are also on the rise and will be looking for their first back to back wins since the last two games of the 2008 season.

Seattle is not a team to be taken lightly. They run the ball very well, they are ranked second against the run and third in points allowed. Beating them will be no easy task.

Let's have a look at what must happen for the Raiders to get elusive back to back wins...

Get After Matt Hasselbeck 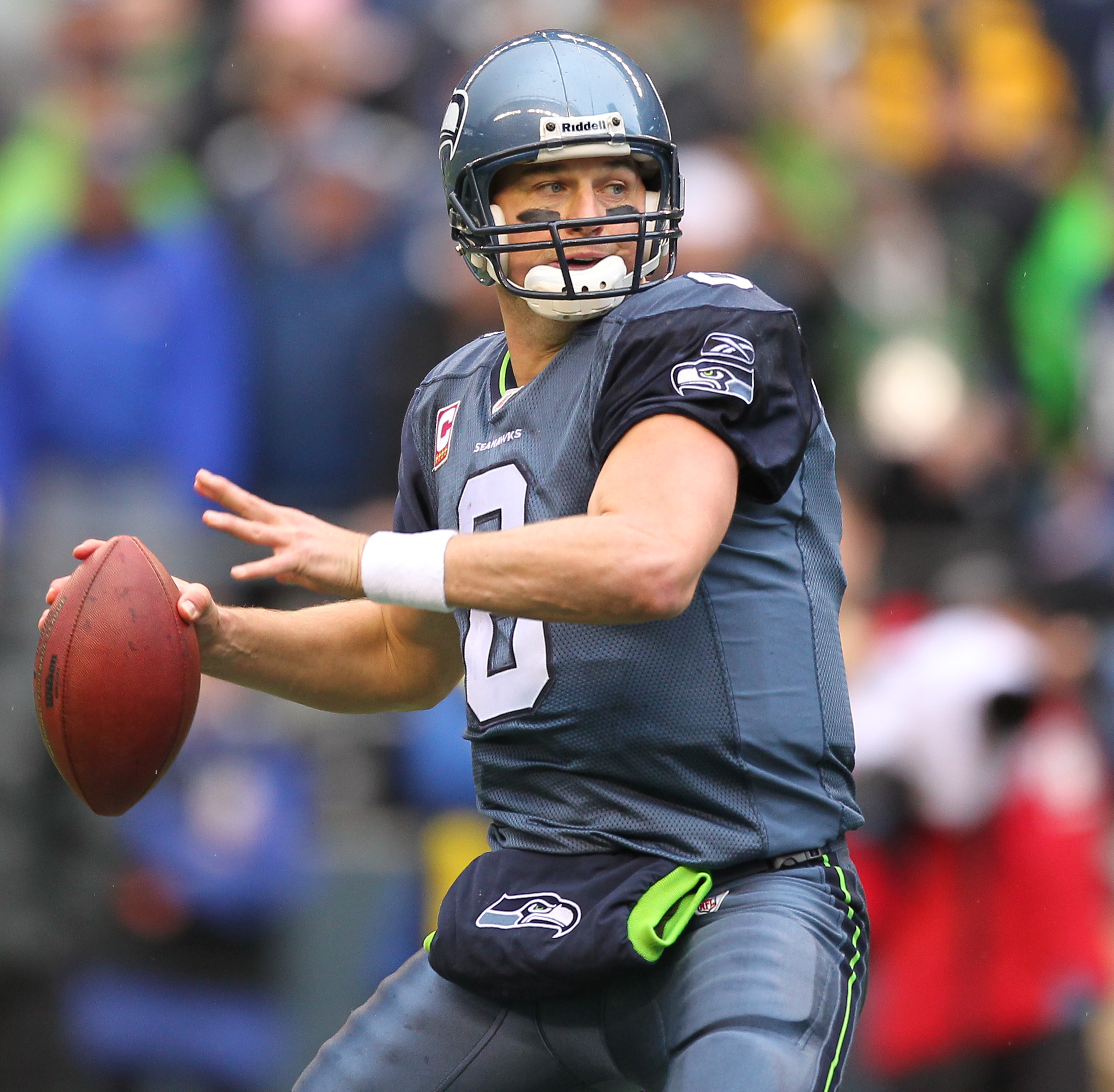 Matt Hasselbeck is having a resurgent season.Otto Greule Jr/Getty Images

"The quarterback must go down early, and go down hard."

Al Davis had it right when he said this, and doing this will be key to the Raiders winning this game.

The fact is, if he's given time to survey the field and throw the ball, Matt Hasselbeck can pick a defense apart. His Super Bowl run in 2005 proves that.

The Raiders have to continue to put pressure on the quarterback as they did in Denver last week.

The injury report states that rookie left tackle Okung is questionable. If he is unable to play, the Raiders have to challenge Okung's backup, Tyler Polumbus. 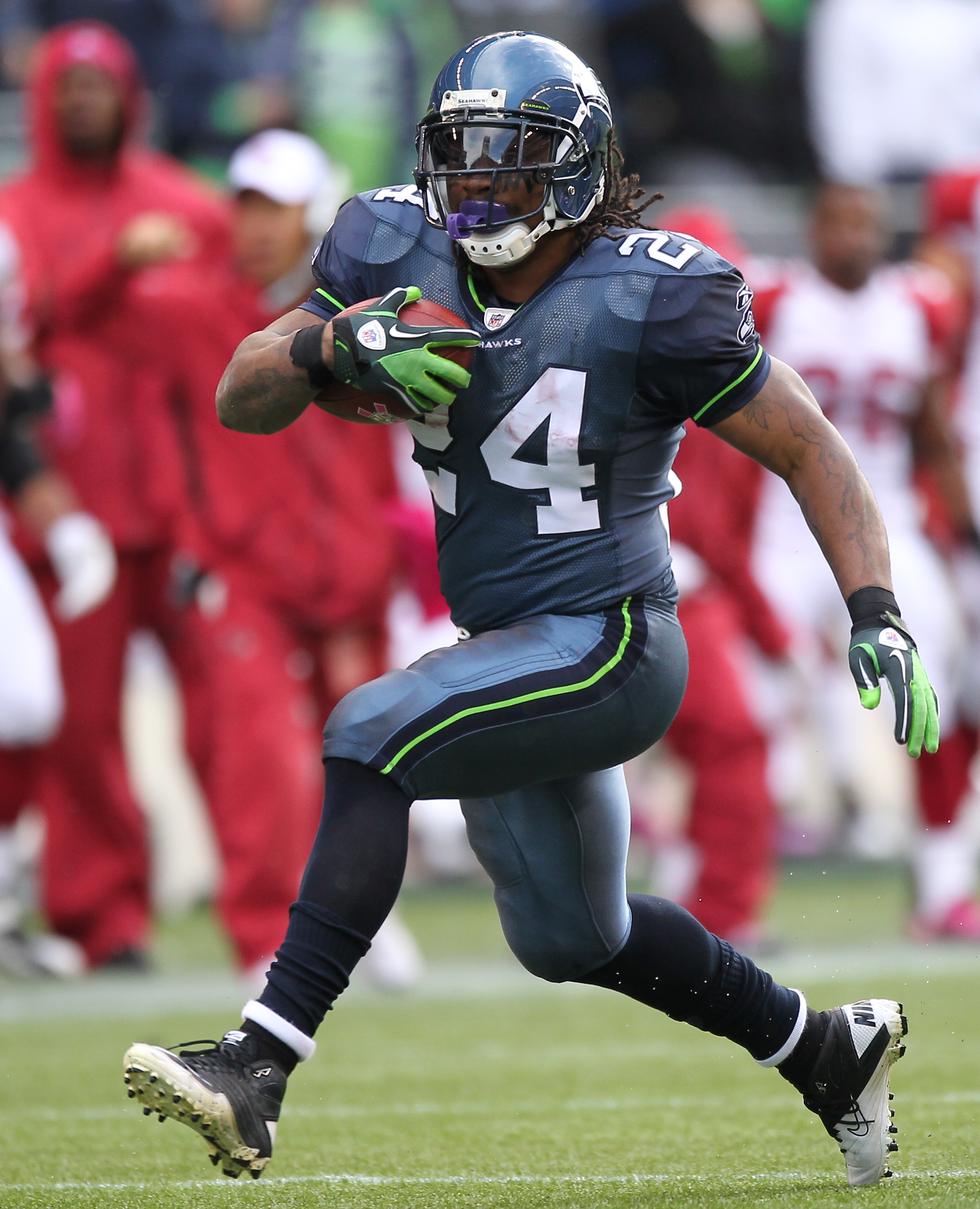 Staying true to gap responsibilities, textbook, wrap up tackles and not over-pursuing will be critical if the Raider defense is to be successful.

Lynch has power, Forsett has great cutback ability, and Washington has both.

Stopping the Seattle run game won't be easy, but failing to do so will set up the play action pass and allow the Seahawks to get big plays and control the clock. 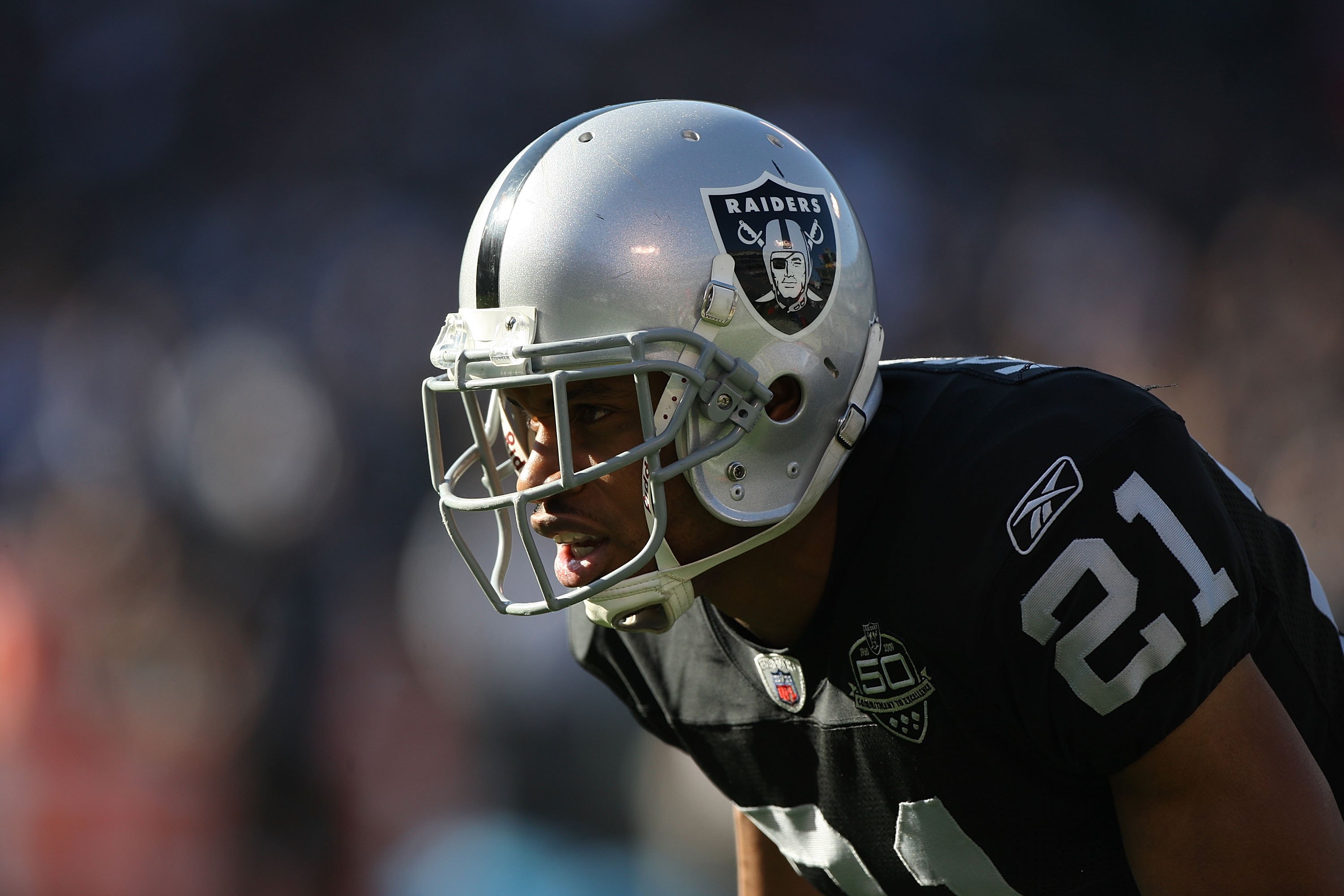 Nnamdi Asomugha is the best in the business.Jed Jacobsohn/Getty Images

Nnamdi Asomugha is the best cover man the Raiders have. Mike Williams is the best receiver the Seahawks have.

It's only logical, almost poetic, that these two square-off all day.

Larry Fitzgerald and Andre Johnson are just two receivers better than Williams that have been shut down by Asomugha. 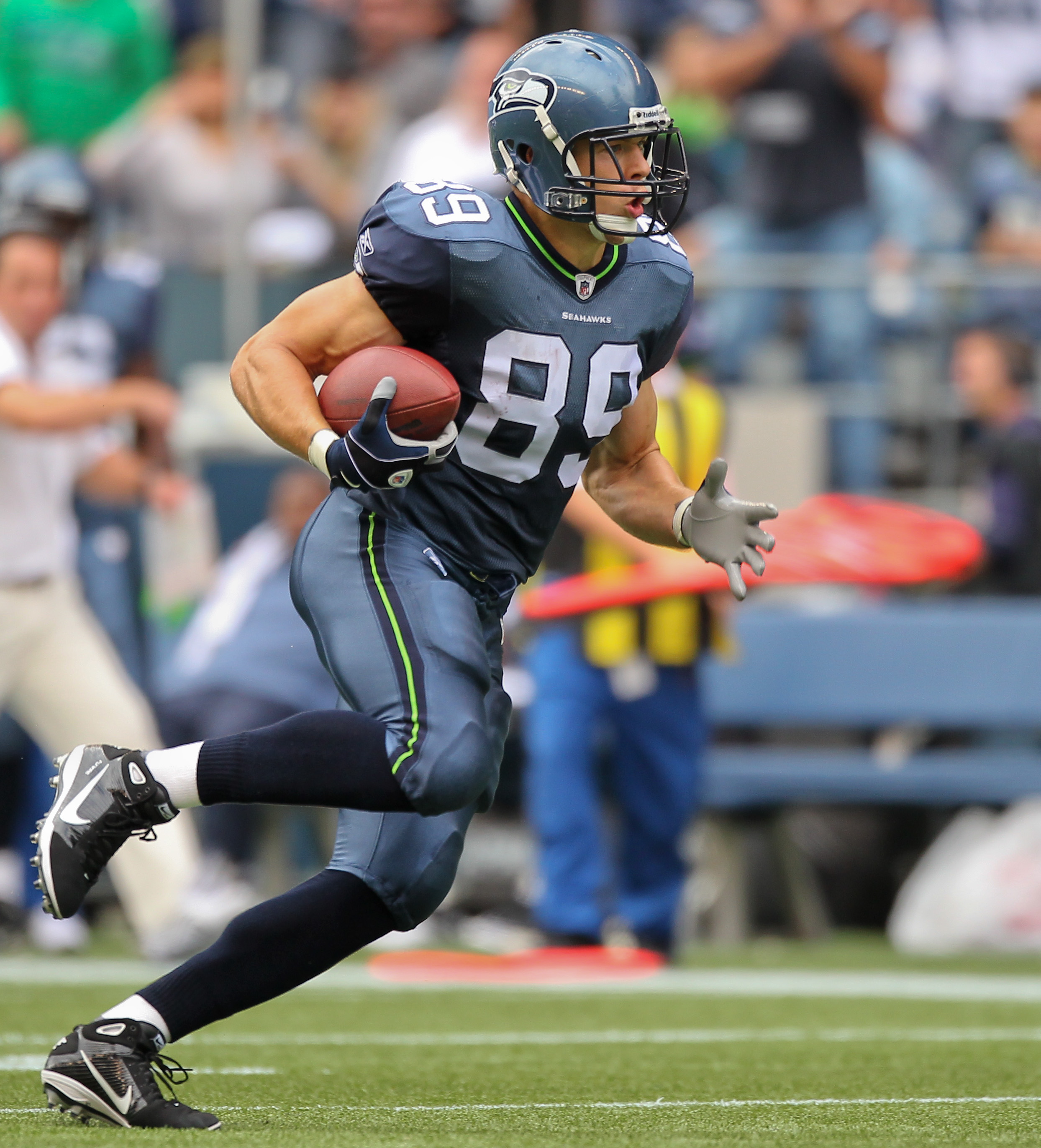 John Carlson is one of the most under rated tight ends in the league.Otto Greule Jr/Getty Images

Assuming that the pass rush gets to Hasselbeck and that Asomugha has Williams well covered, Hasselbeck will be looking for another receiver.

In the past, Hasselbeck has found tight end John Carlson in these situations.

This is where a player like Mike Mitchell can come through for the Raiders.

Mitchell has done a fantastic job on some of the best tight ends in the league. Vernon Davis of the 49ers caught only one ball on Mitchell's watch. Antonio Gates of the Chargers caught only two with Mitchell covering him.

The Raiders can't expect Mitchell to do it alone however. The linebackers must also contribute as they have in recent weeks. If the Seahawks pick up on the fact that Mitchell is exclusively on Carlson, they will simply use him as a decoy.

Mixing coverages and personnel will prevent Pete Carrol and the Seattle coaching staff from identifying and exploiting any tendencies. 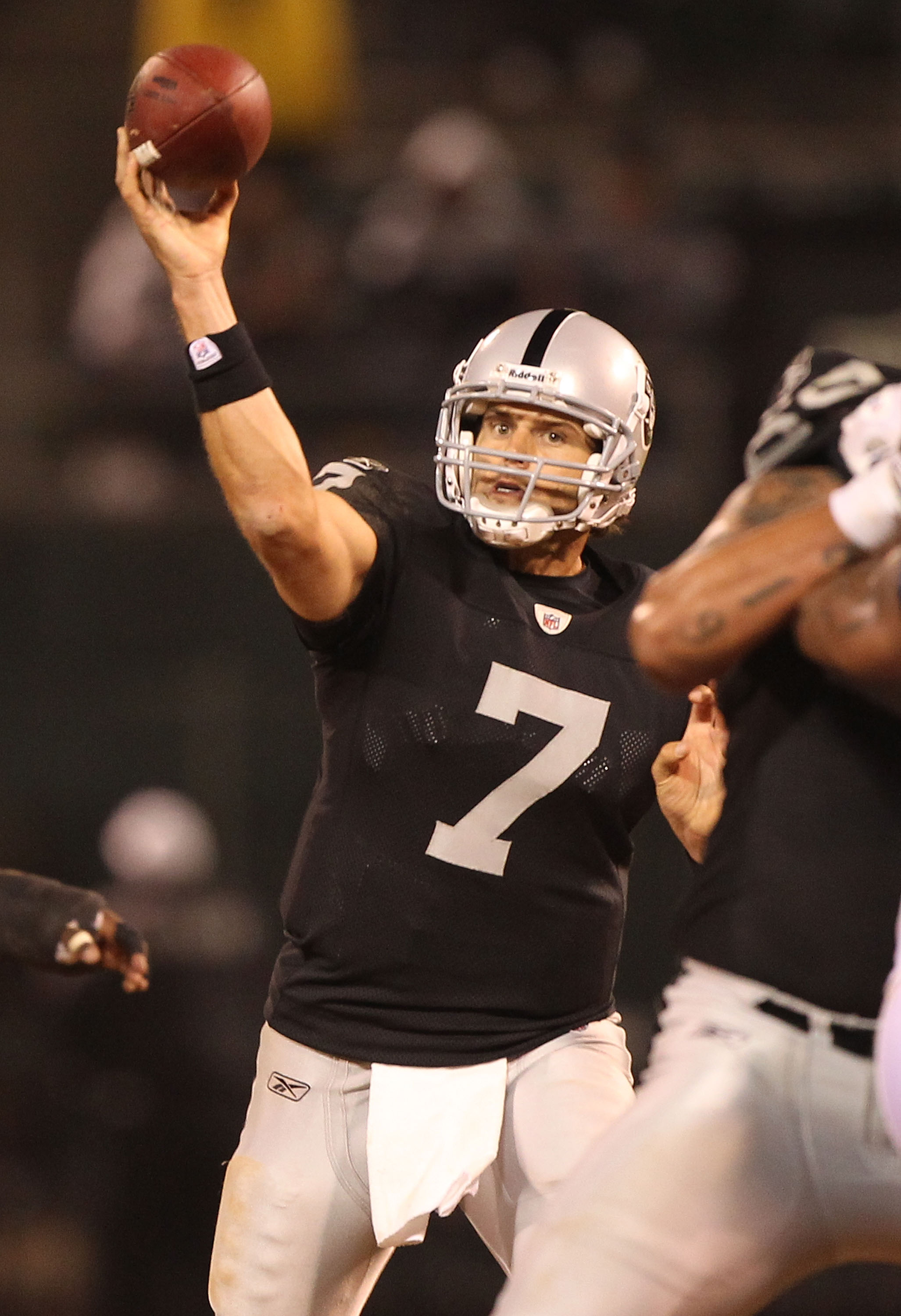 Bruce Gradkowski and Jason Campbell are both listed as "questionable."Jed Jacobsohn/Getty Images

The Seahawks are ranked seventh in sacks with 19. They get after the passer very well.

Bruce Gradkowski and Jason Campbell are both listed as "questionable," so it looks like Kyle Boller may get the start at quarterback for the Raiders.

Both Robert Gallery and Samson Satele suffered minor injuries against the Broncos, but neither are on the injury list. This is a good sign for the Raiders.

Losing these two would have consequences.

Although Daniel Loper has played fairly well in relief, he's not Robert Gallery. Having Veldheer at center would mean Mario Henderson has to play at left tackle.

Henderson was replaced by Veldheer for a reason.

Bottom line: The offensive line has to be healthy and play like a cohesive unit to give the Raiders the best chance at victory. 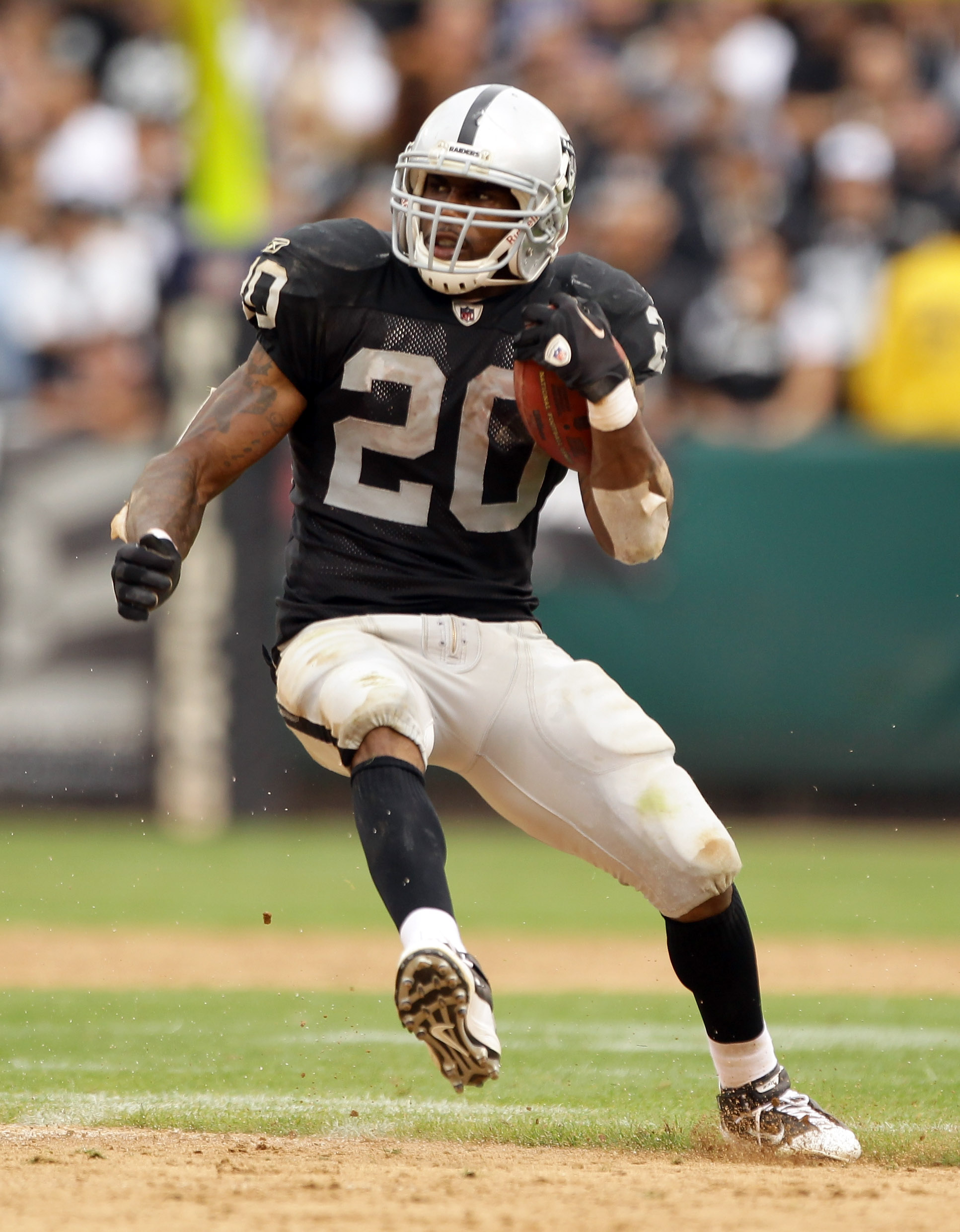 Darren McFadden is on his way to a career year.Ezra Shaw/Getty Images

As I stated in a previous slide, the Seahawks rush the passer very well. This is almost an invitation to run draws and delay runs.

Darren McFadden has shown that he is very dangerous when running these types of plays. Hue Jackson should take advantage of this.

Chris Clemons, Red Bryant, Raheem Brock and E.J. Wilson have a tendency to "pin their ears back" and get up the field very quickly.

I say let them come.

Simply hinging the tackles out, double teaming the defensive tackles inside, combined with the quarterback selling the pass by taking a standard drop should keep the linebackers and safeties from charging the line.

If executed properly, this should create enormous lanes for McFadden and Bush to run through.

This type of run can be very useful and successful for the Raiders. 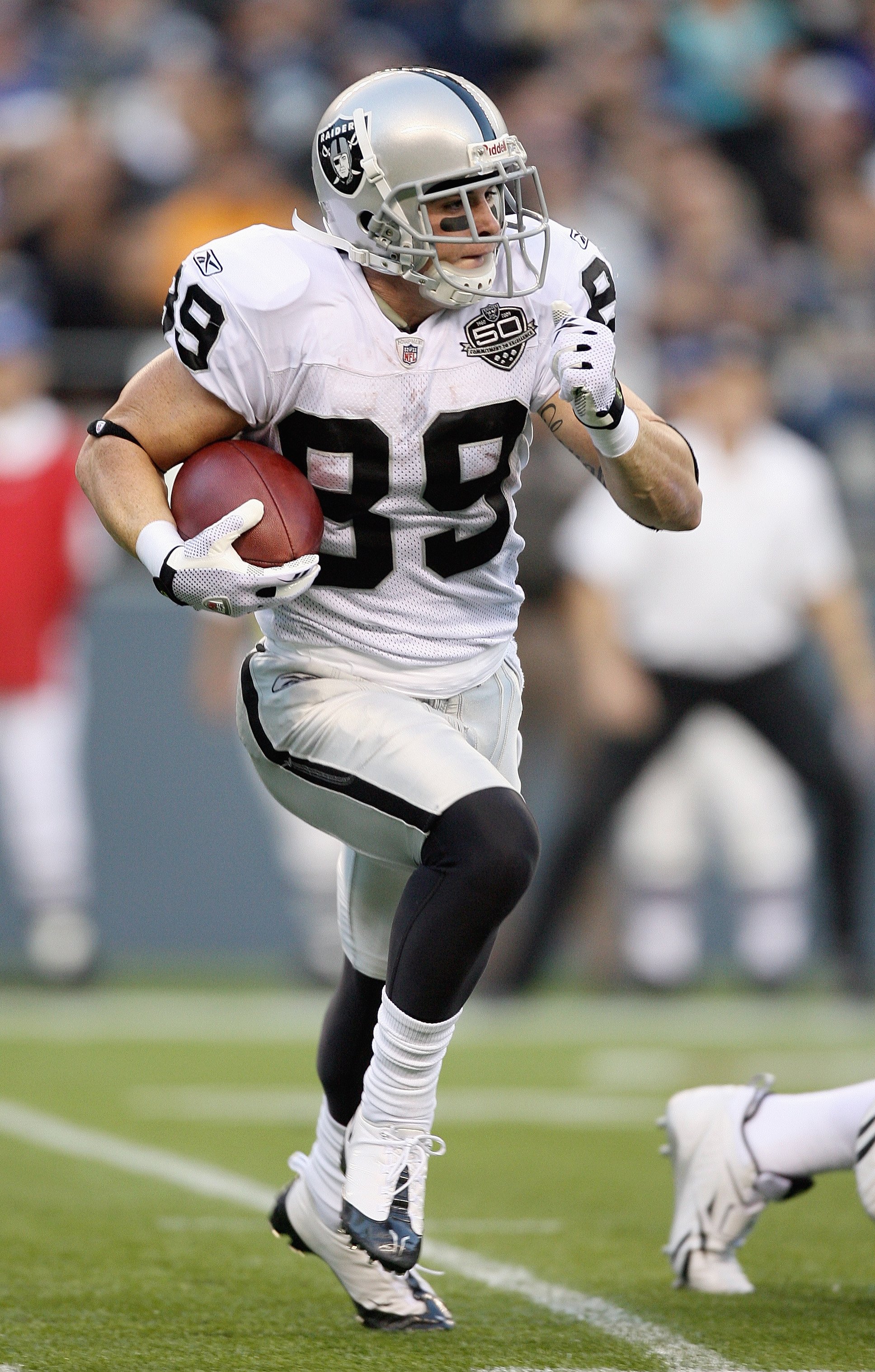 Nick Miller should get some time with the injury to Louis Murphy.Otto Greule Jr/Getty Images

The Seahawks are very talented in the secondary, but are also underachievers. They are ranked 29th against the pass.

Marcus Trufant and Kelly Jennings are good cornerbacks. Lawyer Miloy is a wile old veteran that has seen it all, and Earl Thomas is a rookie that is way ahead of his time.

For some reason, this crew hasn't managed to put it all together—yet. This is due in part to the fact the Seahawks are so good against the run that teams pass the ball a lot more.

Sort of a reverse problem the Raiders have had in recent years.

Assuming the offensive line holds up to the excellent pass rush, there are bound to be some open receivers down field as Seattle relies on man coverage a lot.

Getting the run going as I suggested earlier should also go a long way to creating space and time for the receivers to work.

There are some big plays to be had against the Seahawks.

Use Zach Miller To Control The Middle Of The Field 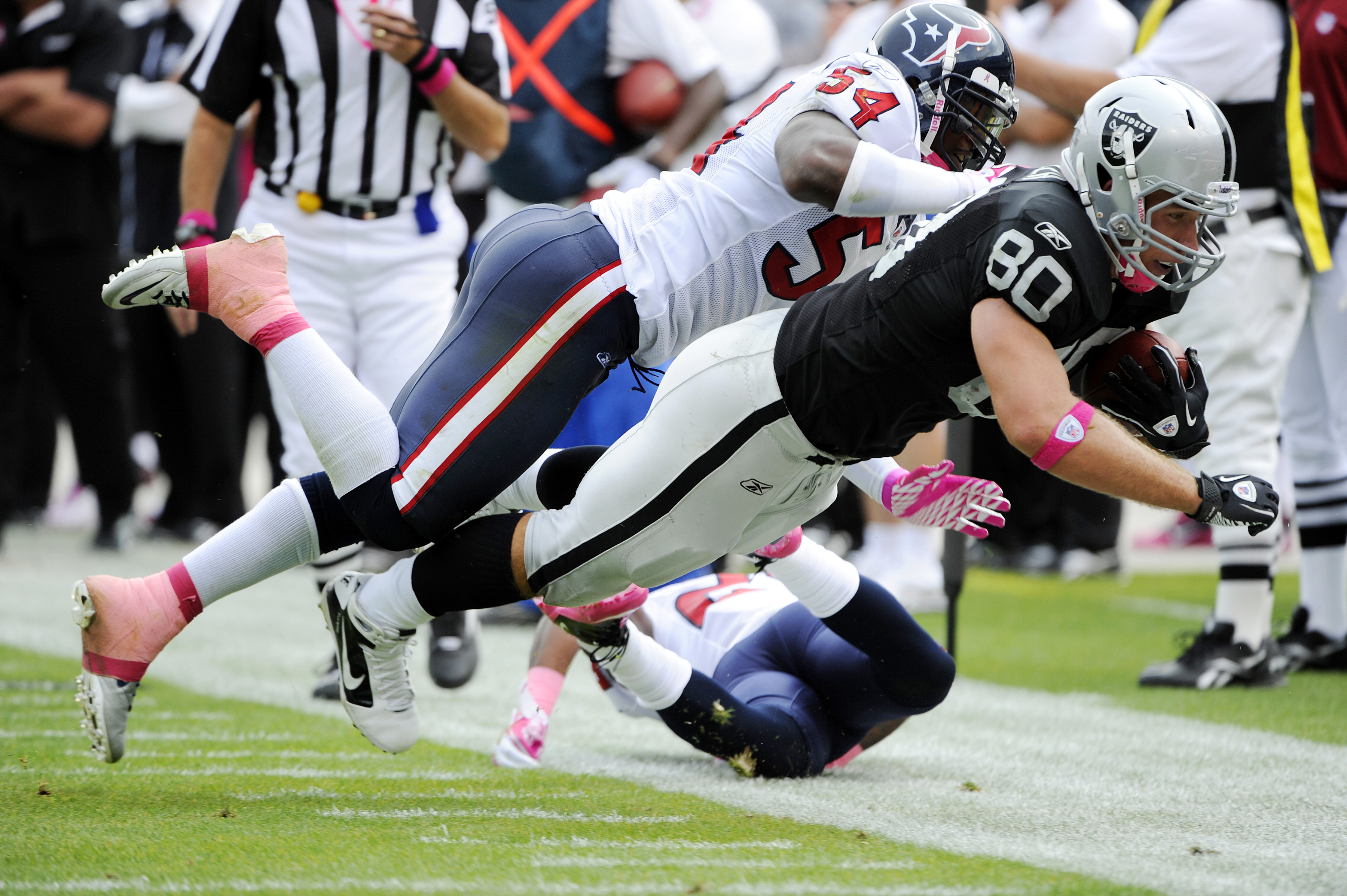 Zach Miller controlling the position of the linebackers could be key for the Raiders.Thearon W, Henderson/Getty Images

One thing the Seahawks' linebackers do well is cover receivers and tight ends.

Lofa Tatupu and Aaron Curry are especially good in zone coverage. They are speedy, agile and smart. However, this can work against them.

Keeping Zach Miller in the short middle of the field will keep these linebackers closer to the line of scrimmage, thereby creating a bigger space between the linebackers and safeties.

Crossing routes by the wide receivers in this gap will result in a lot of 12- to 15-yard completions, thus a lot of first downs for the Raiders.

Assuming the running game is working, play action passes will also make this gap between the linebackers and safeties even bigger. 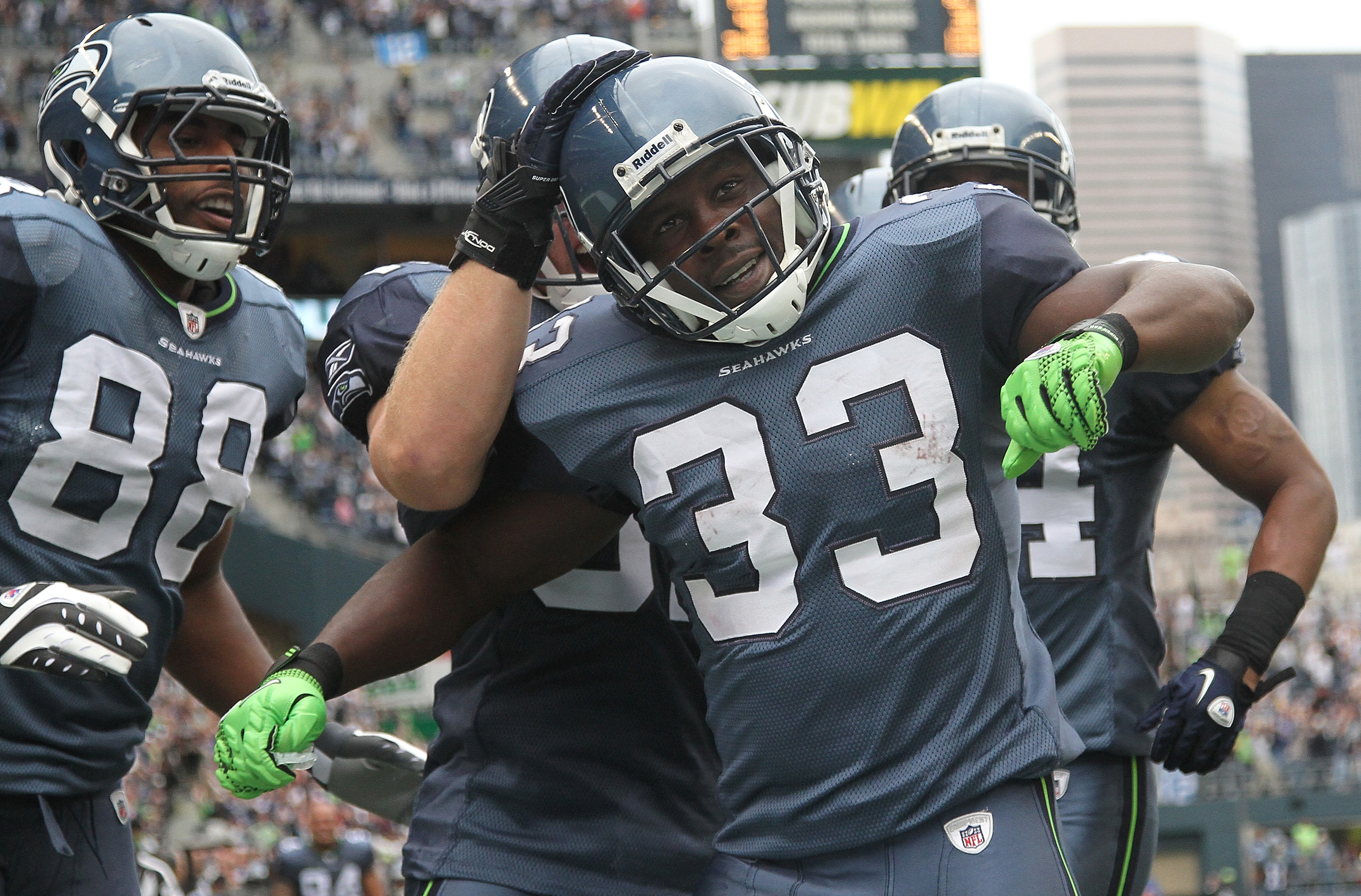 "STAY IN YOUR LANES!"

This should be the first, and most frequent phrase out of John Fasel's mouth this Sunday.

When the coverage team appears to have a returner pinned in, the rest of the players have a tendency to give up their lane responsibility to help with the tackle.

This is the very kind of situation Leon Washington will exploit.

Washington will run right through arm tackles, juke defenders out of their shoes, reverse his field and outrun most special teams players to the end zone.

The Raiders have to stay disciplined in kick coverage.

The Black Hole Needs To Be FULL! 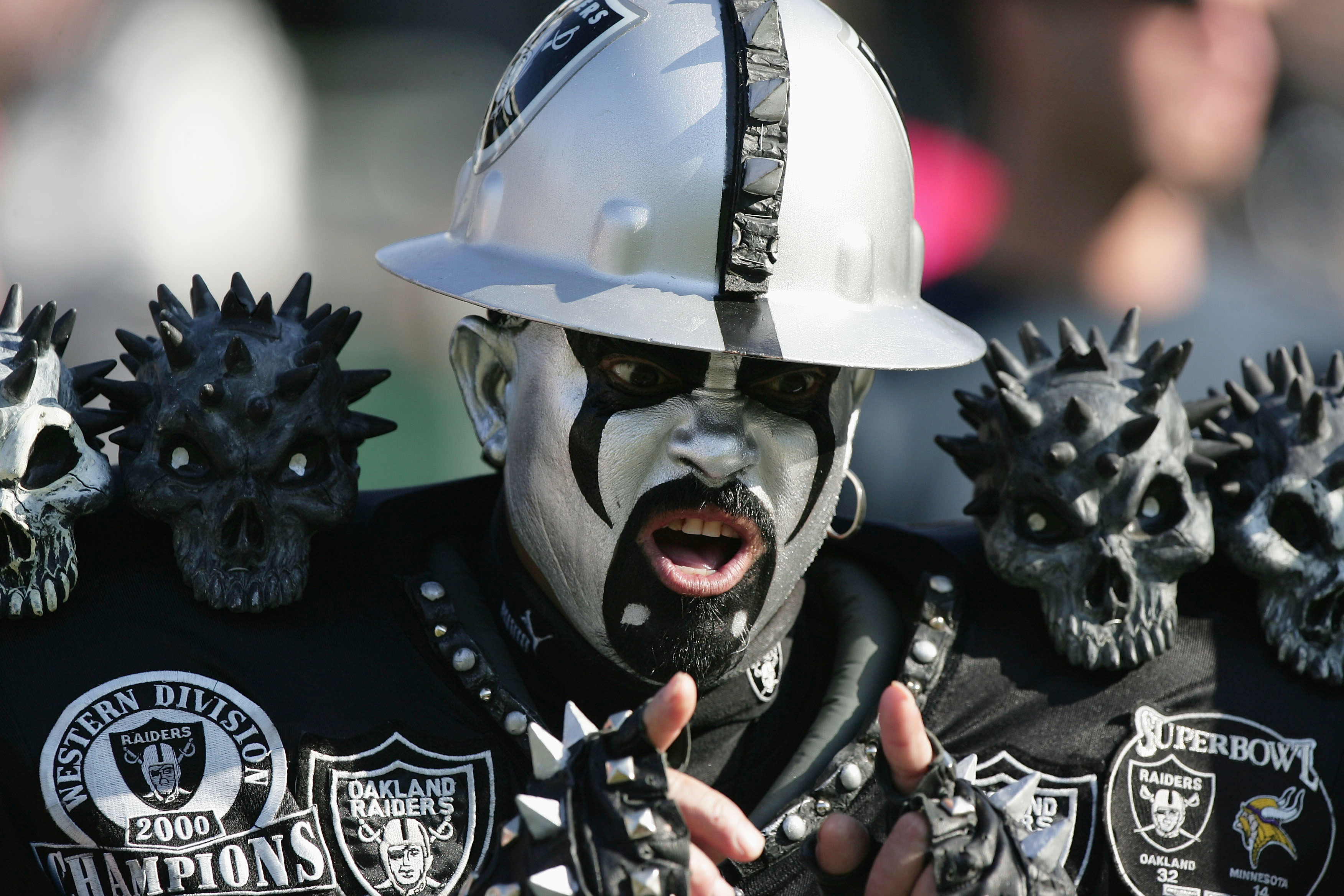 The "12th man" could be HUGE for the Raiders this week.Jed Jacobsohn/Getty Images

Let's be honest, is there a better venue for a Halloween game than Oakland Coliseum?

There is something to be said for a player taking the field and hearing 48,000 screaming fans supporting and cheering him on.

On the flip side of that, nothing takes the fire out of a player quite like making a great play only to look around and realize that you're sacrificing your body for almost no one.

Players, especially young players, feed on the fans' enthusiasm. The Raiders are a very young team. They will benefit greatly from a packed, crazed, loud house.

With that said—GO TO THE DAMN GAME AND SUPPORT THIS TEAM!

An empty Black Hole makes me disgusted and almost ashamed to call myself a Raider fan. I don't live in the area, so I can't be there.

I need everyone that can afford to go, that live in the area and don't have to work to be there for me and yell twice as hard to make up for me not being there. 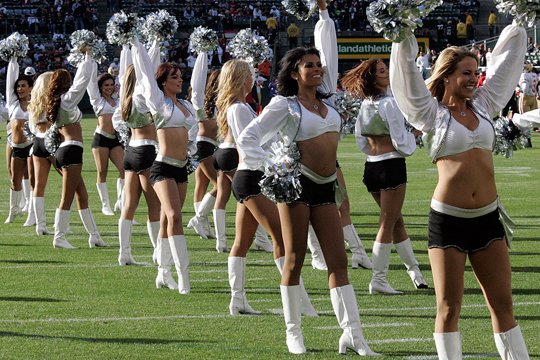 The Raiders are much improved, but don't sleep on the Seahawks. They are improved as well.

If the Raiders can establish the run, there will be some big plays available for the taking against that secondary, but the offensive line will have it's work cut out against a great pass rush.

Covering Mike Williams and harassing Matt Hasselbeck will be key to stopping a solid Seahawk passing attack. Stopping the run comes down to discipline and fundamentals.

What do you say Raider Nation? What did I miss? Let me hear you in the comments. And don't forget to hover your cursor over the pictures to get the captions.