With one pitch, A.J. Burnett may have doomed the 2010 Yanks.

Grady Little is forever remembered as the manager who was fired on the demerit of a single postseason game. Joe Girardi will probably avoid that same fate, but that doesn't mean he doesn't deserve it.

It's hard to imagine Girardi having a worse game than he did on Tuesday at Yankee Stadium. That he had such a bad night, with the stakes being as high as they were, is damn near unforgivable.

Put it this way: If The Boss was alive and still The Boss, reports of Girardi's disappearance would have already been circulating around the Internet.

Girardi manages like a tortured man. The game of baseball doesn't seem fun to him, at least not in his current role. If Charlie Manuel is the type of manager who goes with his gut then lets it play out without regret, Girardi represents the exact opposite.

Things fester. His neurosis consumes him. It even manifests itself physically in the veins that bulge from his neck as he stares onto the field.

In Game 4, we watched many of Girardi's internal fears about his team collapse onto one another, plot lines tying together like a cruel Seinfeld episode.

"How much can I get from A.J.?" "Can Joba be trusted?" "How should I handle Posada and Cervelli?" "Can I get by with someone other than Mo?"

Every button he pushed was like a nuclear launch. By the time he made his final horrible decision of the evening—inserting Sergio Mitre over Rivera in the ninth—it was almost comical. Almost.

There was one inning in particular that both typified Girardi's awful night and likely doomed the Yankees' season.

With a man on second and two outs in the sixth, Girardi decided to intentionally walk David Murphy to get to Bengie Molina. He had Joba Chamberlain warming in the bullpen, only problem was, he had long lost any semblance of trust in the reliever. This lack of faith was pronounced enough that leaving in Burnett seemed like an acceptable alternative, even after the right-hander nearly threw an intentional ball to the screen.

Had Girardi been thinking clearly at the moment, he would have understood that two runs in five-and-two-thirds innings was more than the Yankees could have ever asked for from Burnett. The grotesque nature of Burnett's regular season demanded a leash that was short and unforgiving. And yet, instead of bringing in Chamberlain, he trusted a man who hadn't pitched in 17 days before Tuesday.

Burnett didn't reward his skipper's faith. Molina drilled the next pitch into the seats in left, dragging his impressive gut around the bases and into a jubilant Rangers dugout. He likely took the Yankees' hopes of repeating as champs with him.

Does Burnett deserve blame? Of course. But remember that part of a manager's job is to protect a player from himself. Girardi should've known better than to ask for extra outs from a 15-game loser. He left Burnett in to hang himself. And that's exactly what he did. 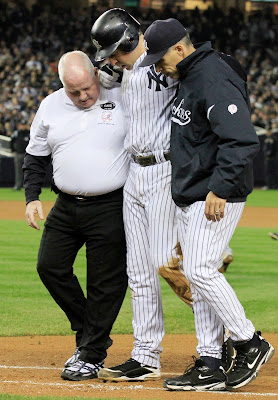 Is there any way to recover at this point? Conceivably, yes. A team as recently as 2007 (Boston over Cleveland) overcame a 3-1 deficit to win the pennant. But it's hard to shake the nagging feeling that the Yankees you saw in September have returned when the games count the most.

CC Sabathia gets one more start to salvage what has been a disconcerting end to a Cy Young caliber season. If he can get it done, Phil Hughes will have to get back on the rubber in Arlington, where he was picked apart on Saturday. The Yankees survive that, they get to face the invincible Cliff Lee in a Game 7.

The odds are—as they say—not good.

I wondered all season if this Yankees team had the character to make a memorable October run. As they faded in September I was convinced for sure they didn't ... then watched in amazement as they started winning playoff games like it was 1996 all over again.

Yeah, I'll admit it. They sucked me in. I know I'm not alone, either. But these last four days are now making me wonder if I was right about them all along.

So who are these Yankees? The proud defending champs with the ability to overcome any obstacle, or just another team loaded with All-Stars but not enough character to translate that to lasting success?

I honestly have no idea. I guess we'll know by tonight.

Dan Hanzus writes the Yankees blog River & Sunset and can be reached at dhanzus@gmail.com. Follow Dan on Twitter @danhanzus.

Ex-Yankee Adam Ottavino off to awful start for Red Sox

Ex-Yankee Adam Ottavino off to awful start for Red Sox