David Pearson: Telling The Tale Of One Of NASCAR's Hall of Famers 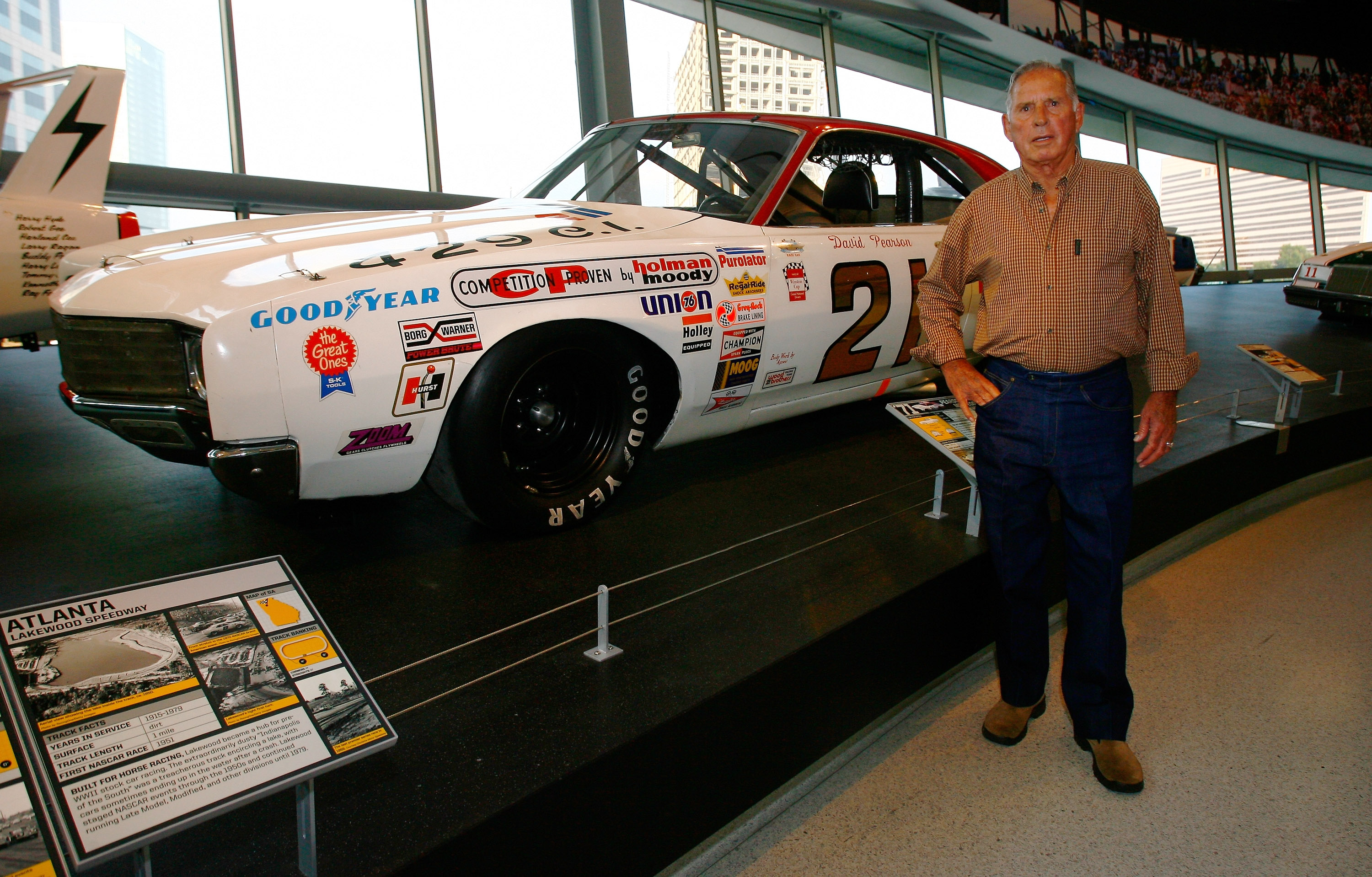 Calm, cool and collected are but a few adjectives that describe the Spartanburg, S.C. NASCAR legend, David Pearson.  To say he was a good race car driver was an understatement, he was a great one.

Pearson was just nominated for induction into the second class at the NASCAR Hall of Fame in Charlotte, N.C.  The induction ceremony will take place in May of 2011.

Pearson's racing career could be defined by words he was often quoted as saying, "I never went into any race I didn't think I could win."

Pearson's win record is second to that of Richard Petty.  The driver known as the "Silver Fox" could win at all types of tracks.  He won three times on road courses, 48 times on superspeedways and 54 times on short tracks.  Driving on dirt tracks brought him many wins as well.

David Pearson was quiet, called things the way he saw them just as he still does and exuded confidence in his driving ability.

The famous driver drove for several owners beginning with Ray Fox.  Others he drove for were Petty Enterprises, Bud Moore and Cotton Owens, but he was best known for driving the No. 21 Ford product for Leonard and Glen Wood.

He raced for the Wood Brothers from 1972 to 1979.  His last race for them was at Darlington.  Lack of communication during the pit stop resulted in Pearson leaving the pits without lugnuts.  His wheels fell of at the end of pit road.  He quit after the race, but enjoyed  43 wins while driving for the team.

Late in 1979, car owner Rod Osterlund had a rookie driver with a shoulder injury by the name of Dale Earnhardt.  The injury kept him from driving, so Pearson was hired to replace him for four races.  He won the pole at Michigan and won the Southern 500 at Darlington.

Among his many honors was being voted NASCAR's Most Popular Driver in 1979.

In the early to mid 1980's he drove for a couple owners including Hoss Ellington, but he just wasn't finding the winning ways he was used to.  He drove his own car in 1986 and after finishing 10th at Michigan he quit racing in NASCAR's top-tier.

Pearson has three sons, Larry, Ricky and Eddie.  He still shows up at NASCAR events and other racing related venues.  He remains active, well-liked and physically fit as he pursues various interests including street rods and motorcycles.

The man can flat tell some stories and has enjoyed very interesting adventures on and off the track.  When asked by a commentator at his nomination to the NASCAR Hall of Fame if this was the greatest thing to happen to him, Pearson responded, "No", citing he had many great times during his career.

Let's take a look at some of the many facets of this man and his career in and around NASCAR.

The No. 3 Kept Pearson From Being a Roofer Instead of a Driver 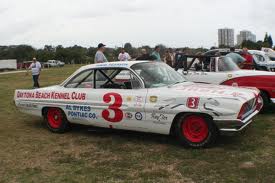 Pearson began racing in the Busch (Cup) series in 1960.  He drove his own car with mediocre results.  In early 1961 he bent the frame of his car and went to work as a roofer to support his family.

Owner Ray Fox needed a replacement driver for the World 600 at Charlotte in 1961.  He chose David Pearson.

Pearson found a line that was easy on his tires and they used only 12 by changing right side only.  They set a hot pace, but blistered some tires.  Pearson was leading with the No. 3 when he hit some debris causing his right rear tire to explode and even with a slight engine miss he decided he would not pit the car.

Pearson didn't realize he was three laps in the lead.  Barely rolling, he crossed the finish line, sparks flying and captured the win with the No. 3 Pontiac.

Fox then hired Pearson to run the Firecracker 400 at Daytona, which he won, and the rest is history as they say. 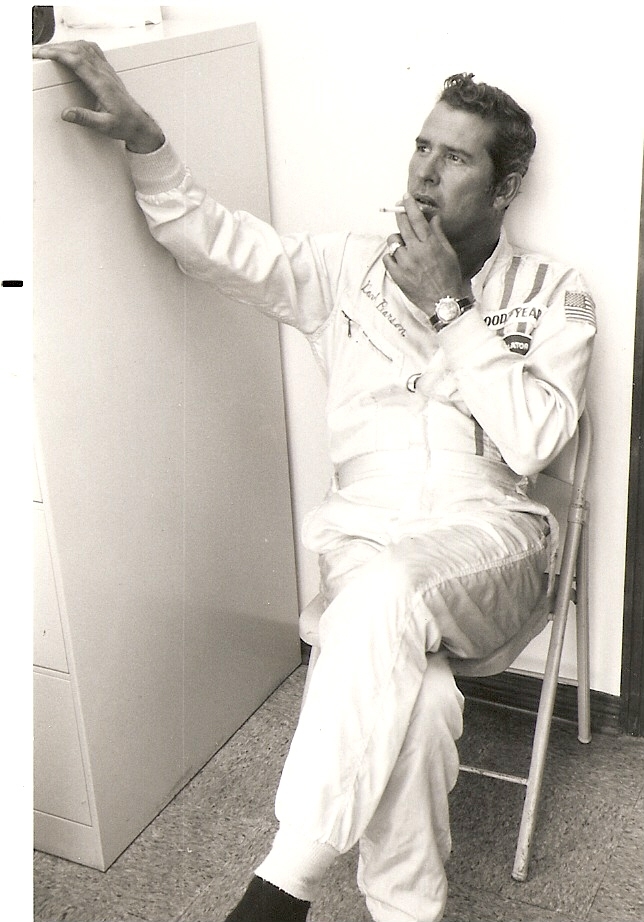 It was not unusual to see a pack of cigarettes and a pack of Wrigley's gum taped to the dashboard of his race car.

The cigarette lighter in Pearson's stock car worked for more than one reason.  Drivers knew they were in trouble when the confident driver soared passed them casually puffing on a cigarette.

The sticks of gum changed about every 100 laps to keep his mouth moist.

David Pearson Was Cool Before It Was Popular 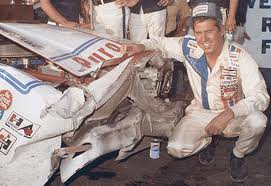 David Pearson was known for the cool factor, always confident he could get the job done.

He would ask which laps were the money laps so he could drive harder and as seen in the picture, damaged cars were not a problem when he took the No. 21 to victory circle at Daytona in 1976. 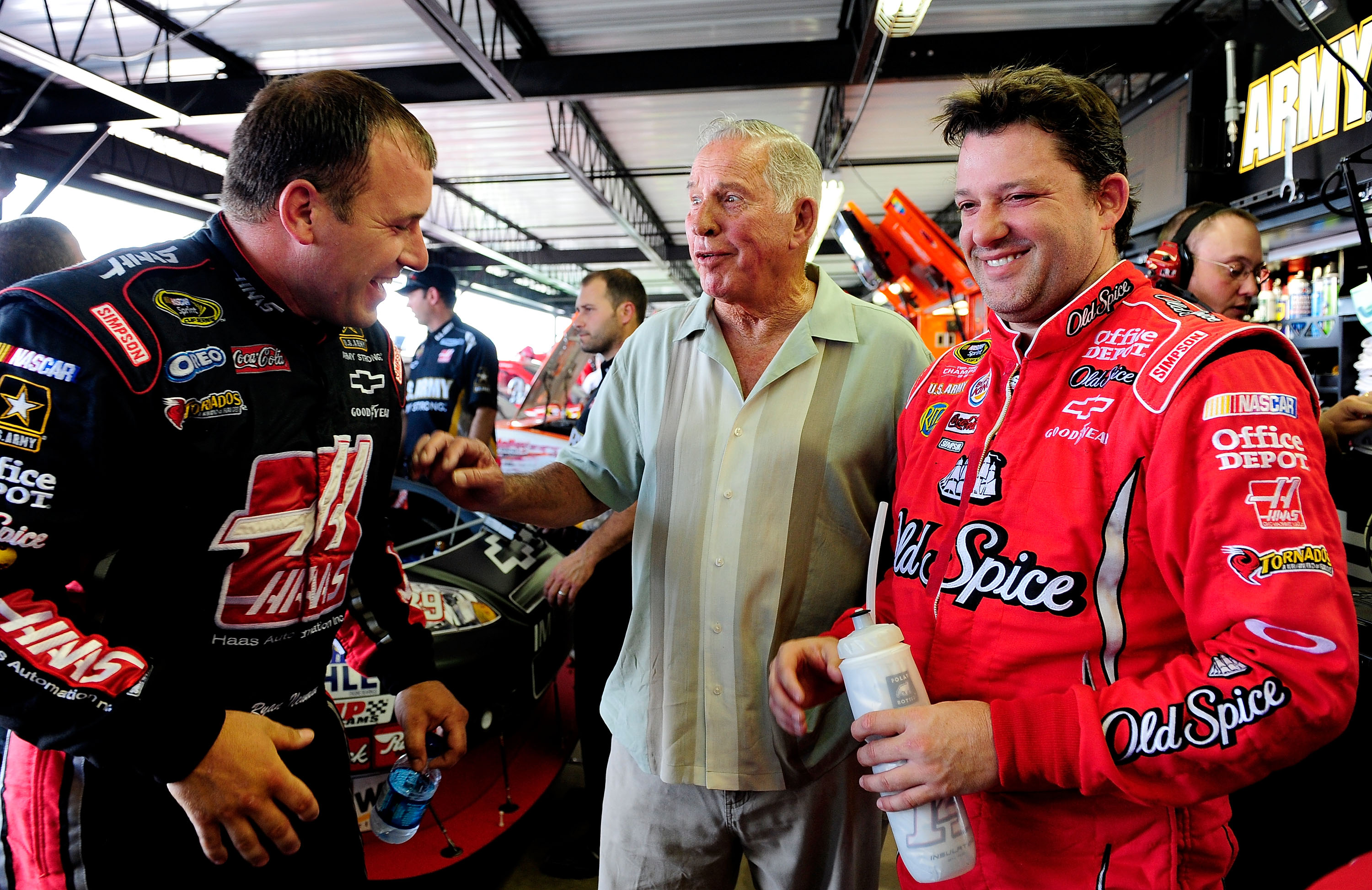 It is not unusual for David Pearson to show up in the garage area at a NASCAR race.  Most drivers know who he is and he admits he doesn't know many of the newer guys, but certainly there are those who seek his opinion or just appreciate a light-hearted chat. 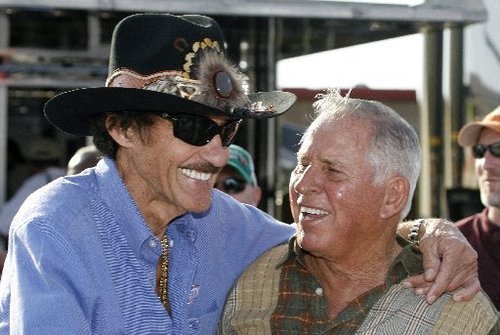 Richard Petty and David Pearson had perhaps one of the toughest rivalries in NASCAR.  Petty had 200 wins in the top-series followed by Pearson with 105.

Petty didn't like to lose, but if Pearson beat him he knew he had been beaten by the best.  Those 63 one/two finishes showed just how competitive the two drivers were.

Pearson and The Wood Brothers 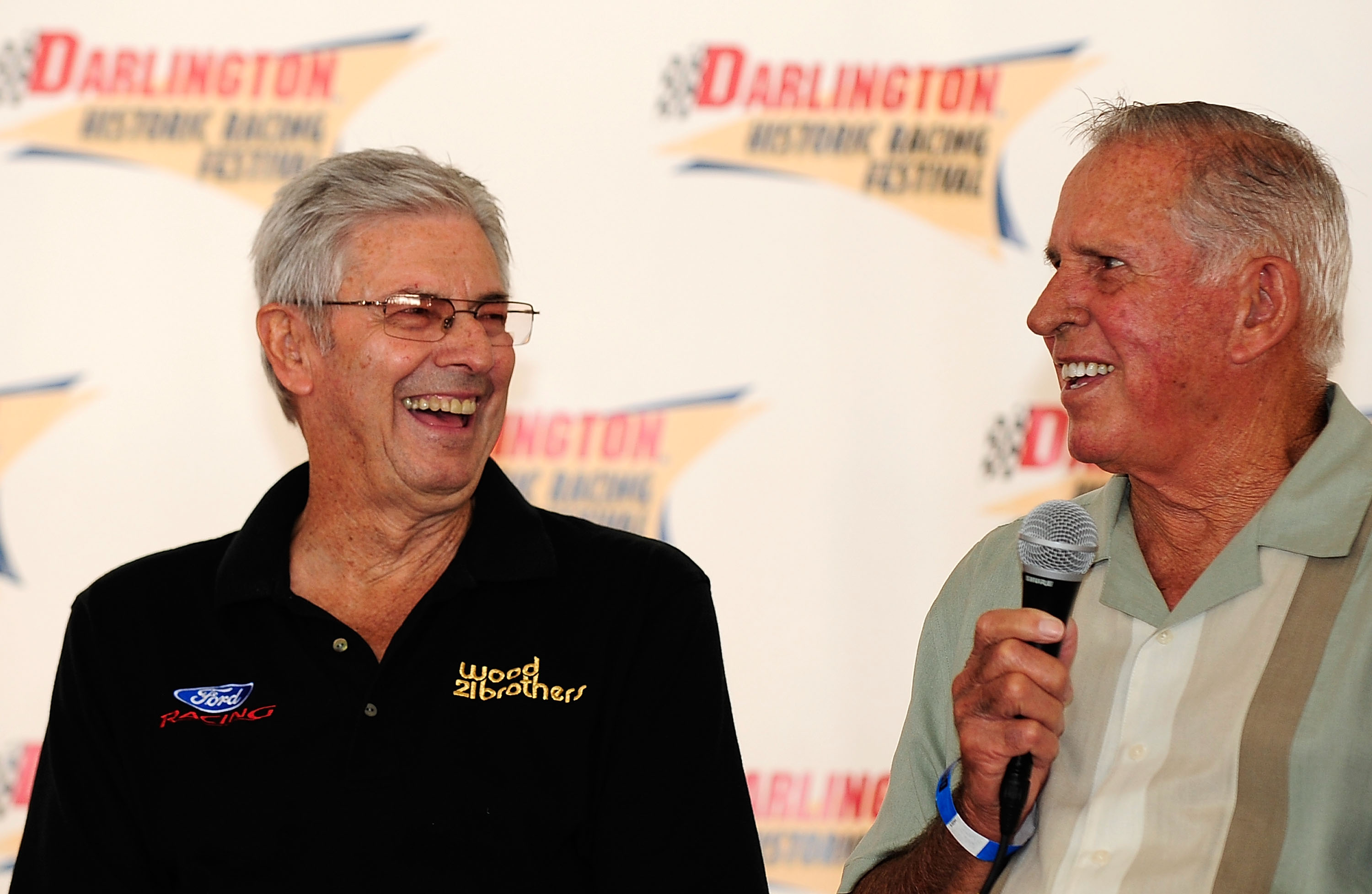 Glen Wood, the oldest of the Wood Brothers originally began as a driver, then had others drive for him.  Younger brother Leonard was always the driving force behind the lightning fast pit stops and built the engines.

Without a doubt the most famous relationship between the Wood Brothers and a driver was that of David Pearson who wheeled the highly recognized No. 21.

In the picture, Pearson shares one of his many hilarious stories with Leonard Wood.  Currently Wood Brothers Racing is operated by Glen Wood's sons, Eddie and Len. 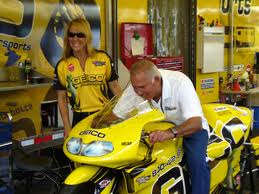 David Pearson remains interested in performance motorcycles and has been rumored to make some high speed runs on roads where he hoped he wouldn't get caught.

Here he is seen on Karen Stoffer's pro bike at a NHRA event. 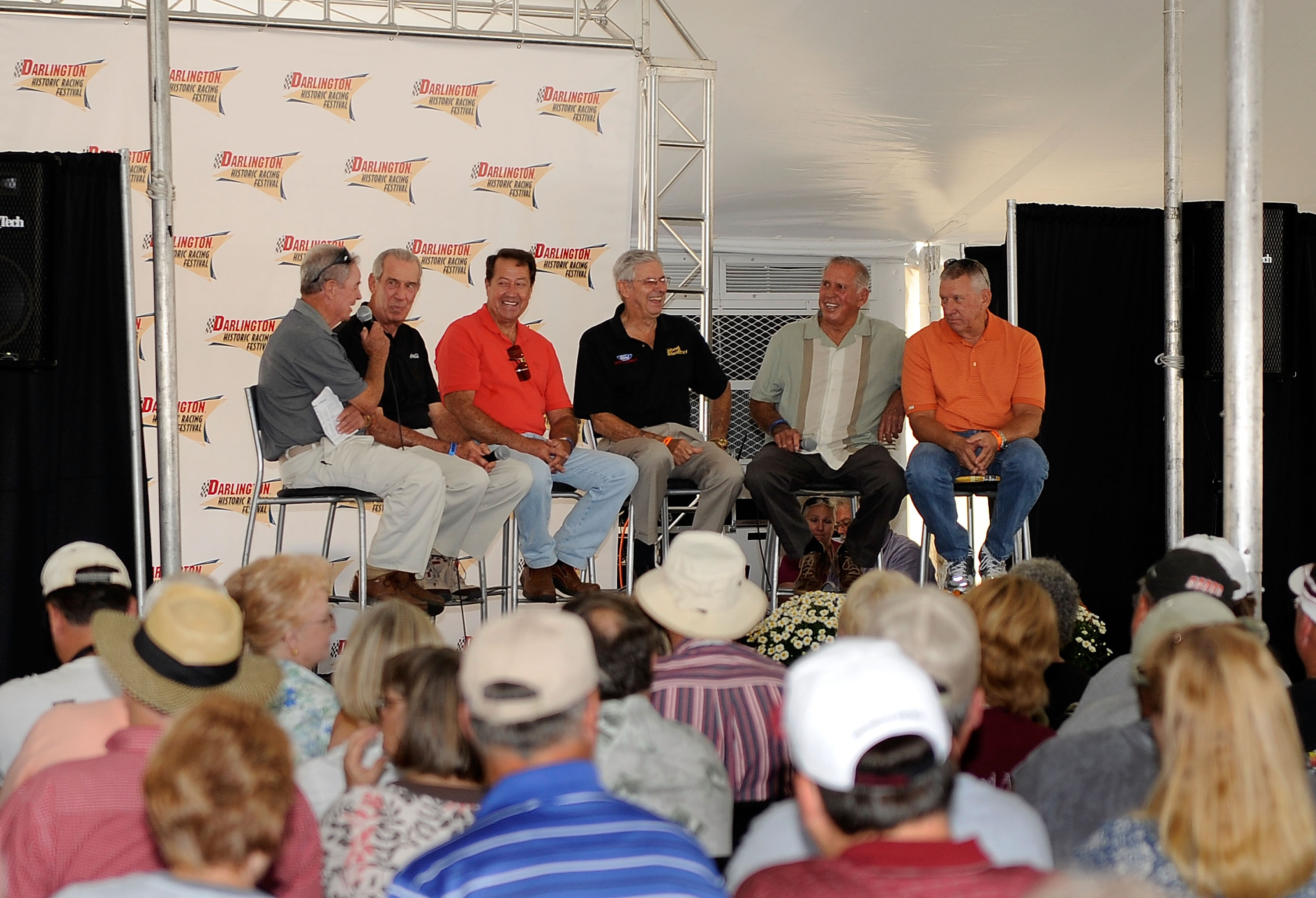 Even back in his prime racing years it was easy to get a photo with David Pearson and he remains extremely popular with fans of all ages.

Though all the men on stage had great stories to tell, it was Pearson who would have the audience roaring with laughter with his comments.  His quiet demeanor and humor never fails to surprise and entertain.

Easy on The Eyes Back In the Day 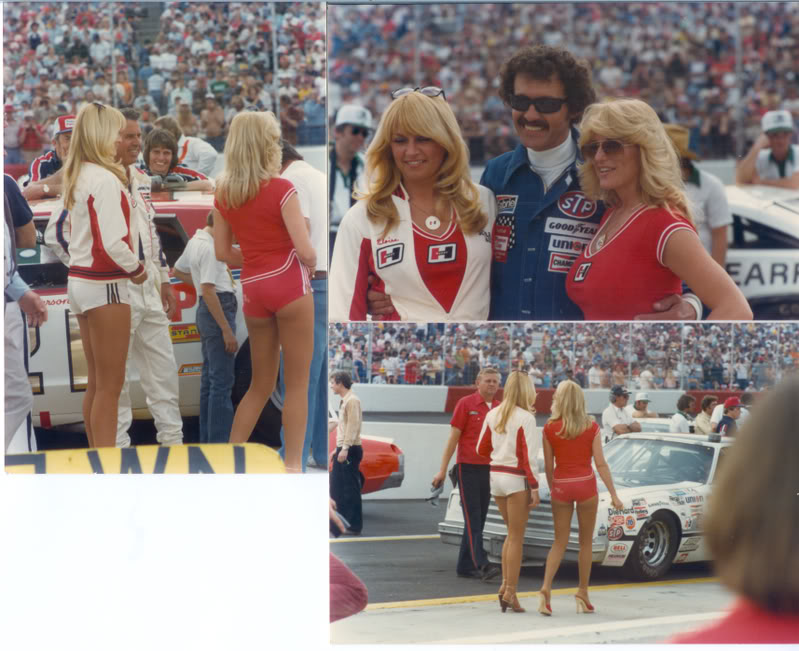 Drivers were surrounded by beauties representing Winston, Miss Hurst Linda Vaughn and her Hurstettes and others who were highly visible at many racing venues.

It must have been really hard to stay focused on driving at times with all the distractions often seen along pit road and around the garage area.

The women who represented the sport were extremely popular with fans as well.

Carl Edwards May Have Learned A Thing Or Two 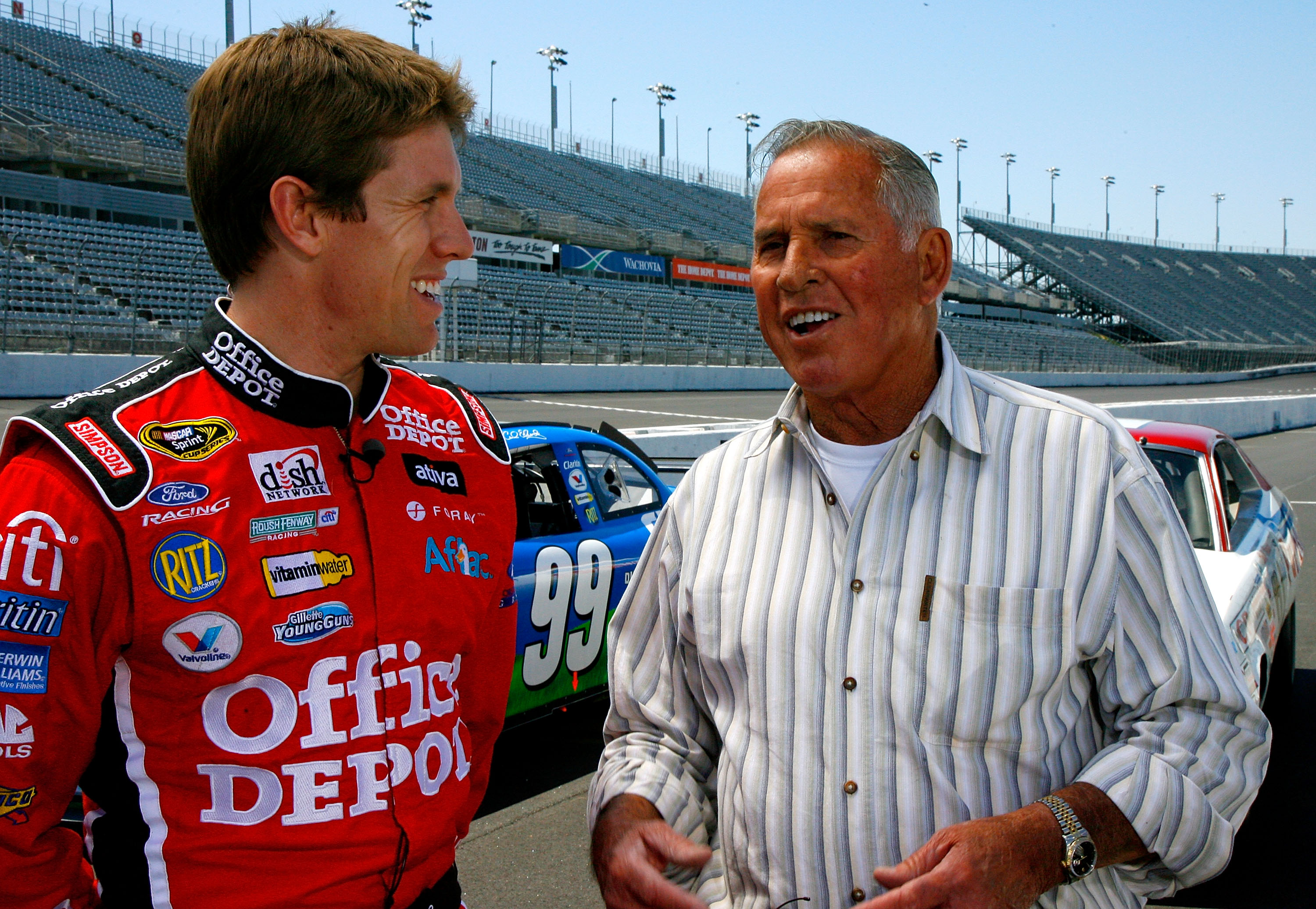 Carl Edwards and David Pearson are seen in this picture at Darlington Raceway for a media day.

The No. 99 took some laps around the track with Pearson in the No. 21. I am sure Edwards picked up a tip or two especially about driving the Lady In Black.

Edwards and Pearson Hold a Line 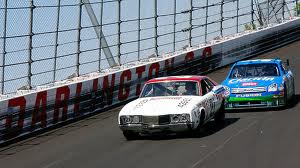 In this photo I am sure Carl Edwards had to be thrilled to take some laps around Darlington with the Silver Fox.

David Pearson climbed through the window of the Purolator Mercury with five pieces of Wrigley's gum taped to the dash and did five publicity laps with Edwards.

Thanks For The Memories 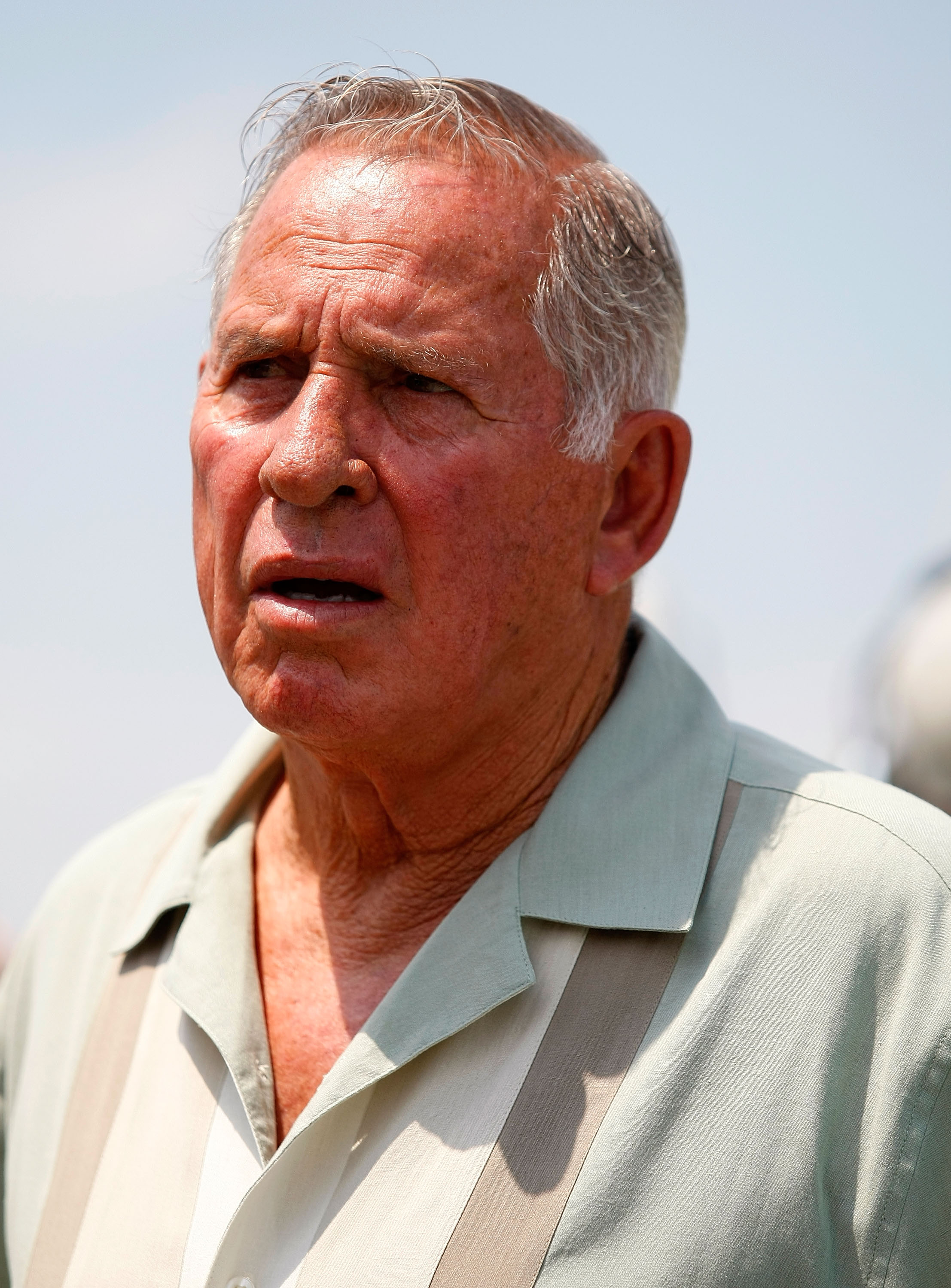 Drivers like David Pearson, Richard Petty, Cale Yarborough and Bobby Allison amongst so many more were a certain breed of men that we shall never see the likes of again.

For those of you who never got to watch these drivers in action, I wish that you had.  It was a great time in racing and these were tough men who raced because they loved it.  The money they made was insignificant compared to what today's drivers earn.

Times change and new history is being made in NASCAR, yet one day fans will look back at the racing we currently witness and refer to the good ole days.

As for David Pearson, thank you for the memories.