There was bedlam in Pittsburgh 50 years ago when Bill Mazeroski homered to beat the Yankees and win the World Series for the Pirates.

Fifty years ago this very day, Oct. 13, 1960, Pittsburgh Pirates second baseman Bill Mazeroski hit one of the most famous home runs in baseball history. Maz achieved what every American kid dreams about — hitting a home run to win the seventh game of the World Series.

On a bright October afternoon, Mazeroski slugged a pitch from Yankee reliever Ralph Terry over the head of Yankee left fielder Yogi Berra and beyond the ivy wall at old Forbes Field in Pittsburgh. It gave the Pirates a 10-9 win over New York in the seventh and deciding game of the World Series.

Maz’s home run, on the day of the third Kennedy-Nixon candidate debate, remains the only Series clinching Game 7 home run in history.

“When I hit (the home run) I thought it was just another hit to win a game,” Mazeroski recalled. “I didn’t think I’d be talking about it 50 years later.”

Terry summed it up perfectly when he said, “I don’t know what that pitch to Mazeroski was. All I know is that it was the wrong one.”

The implausible win made the Pirates a World Champion for the first time since 1925 and left the Yankees wondering what hit them.

Vintage Broadcast
For nearly 50 years, the broadcast of the deciding game of the 1960 World Series was believed to be lost forever. However it was recently discovered in a black and white, five-reel set encased in gray canisters in Bing Crosby’s wine cellar near San Francisco.

Crosby, who was a part owner of the Pirates, was superstitious and too nervous to watch the Series against the Yankees, so he went to Paris with his wife Kathryn and listed to the famous game on short wave radio.

Meanwhile, he hired a company to record the game in kinescope — an early version of DVR — filming off a television monitor. Graphics were simple and rarely used — there were no replays, no analysis, no trivia quizzes. Pittsburgh broadcaster Bob Prince called the  first 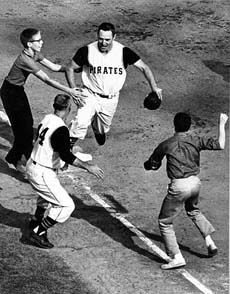 half of the game, and Yankee broadcaster Mel Allen the second half.

The MLB Network has acquired the rights to televise the game in December, and also plans to sell DVDs of the game.

Yet somehow the underdog Bucs found a way to force a seventh game. That afternoon the Pirates quickly jumped to a 4-0 lead, battering Yankee starter Bob Turley.

But then the Yanks came back on the strength of a three-run homer by Berra down the right field line in the sixth, and carried a 7-4 lead into the bottom of the eighth.

Then the Pirates rallied. First a bad hop grounder by Bill Virdon hit Yankee shortstop Tony Kubek in the throat, preventing a double play. Then reliever Jim Coates failed to cover first base on a slow chopper by Roberto Clemente, allowing a run to score and extending the inning.

When Pittsburgh catcher Hal Smith slugged a three-run homer, the Pirates suddenly had a 9-7 lead. Mickey Mantle singled to drive in a run, then avoided a tag by first baseman Rocky Nelson as Gil McDougald, playing his final game, scored to tie the game at 9-9.

Mazeroski led off the bottom of the ninth for Pittsburgh. He took a ball from Terry, then hit the next pitch for the home run that rocked the Steel City and rolled the Yankees.

Mantle Wept Openly
In the Yankee clubhouse, Mantle wept openly. He was later quoted as saying that losing the 1960 series was the biggest disappointment of his career.

When Terry, right., sat dejectedly in his locker Coates came over to him and said: “I sure hate to see it happen to you, but you sure took me off the hook.” Terry just glared at his teammate.

Shortly after the Series ended, Stengel was involuntarily retired from the Yankees, because he was believed to be too old to manage. Stengel remarked that he had been fired for turning 70, and that he would “never make that mistake again.”

Mazeroski, below, one of the best fielding second baseman ever, was inducted into the Hall

Terry was on the mound in the ninth inning for another Game 7 two years later — against the Giants in 1962 at Candlestick Park. He pitched a complete game shutout and beat San Francisco 1-0 that time, getting Willie McCovey to line to Yankee second baseman Bobby Richardson for the final out with the tying runs on base. Terry was 23-12 that season, and was named World Series MVP.

Personal Note — I was a fourth grader and already a Yankee fan when the 1960 World Series was played. For Game Seven, Sister Mary Gerard let us listen to bits of the game broadcast on our transistor radios. After school I rushed home to see the dramatic finale. And when Maz hit the home run, I cried, just like Mickey Mantle