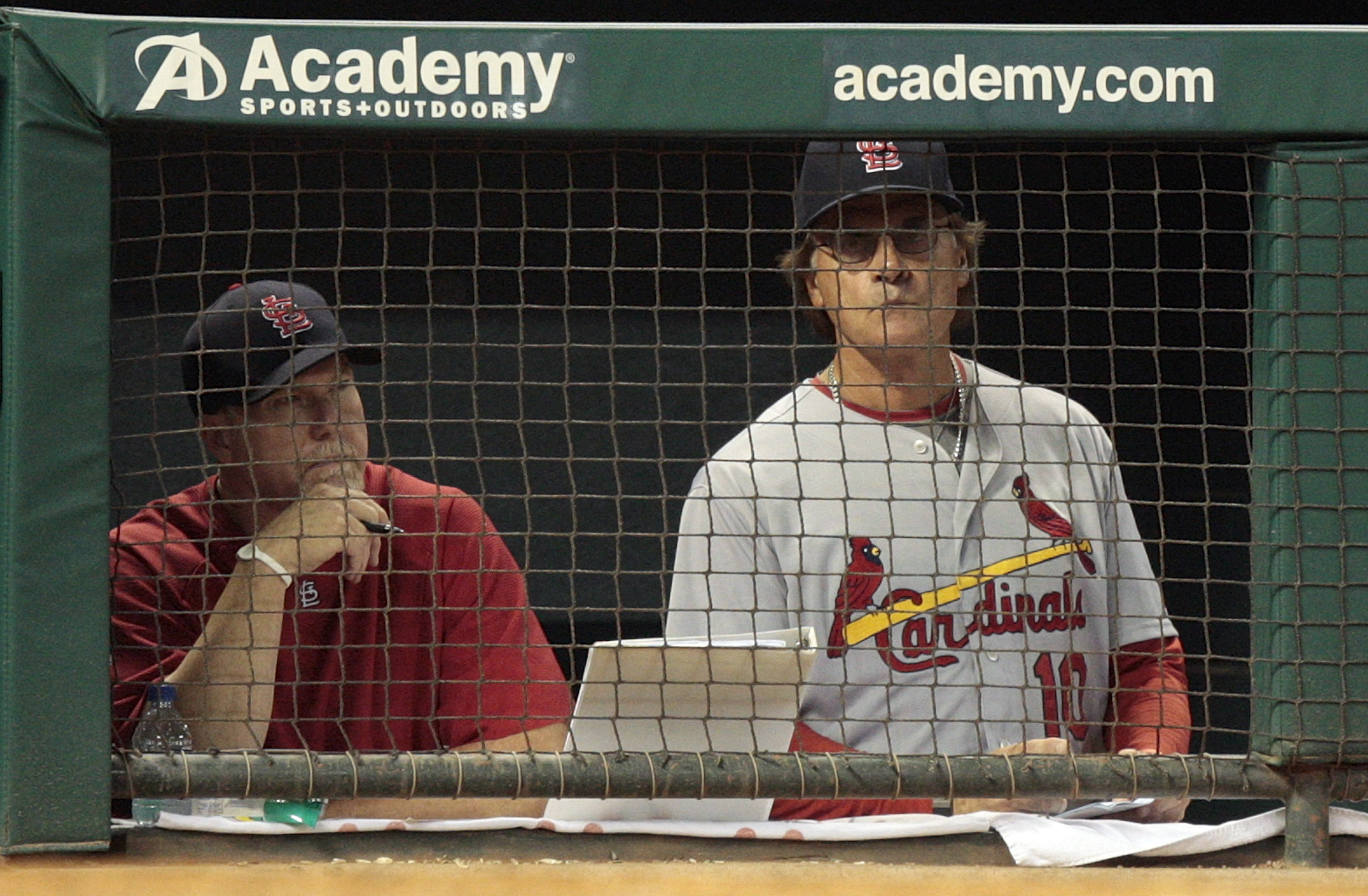 Coming into the 2010 baseball season, there was no clearer choice than the St. Louis Cardinals as National League Central Division champs.

They had Albert Pujols, the best player in baseball, and possibly the best 3-4 combination in Pujols and Matt Holliday.

Their starting rotation, led by co-aces Chris Carpenter and Adam Wainwright, was thought to be one of the best in baseball.

However, even after a win against Cincinnati on Friday night, the Cardinals trail the division leading Reds by seven games, and are looking more and more like a team struggling to stay in the Wild Card race, where they trail the Phillies by five games.

So how did such a promising season get to this point? Here are 10 reasons it's gotten this way. 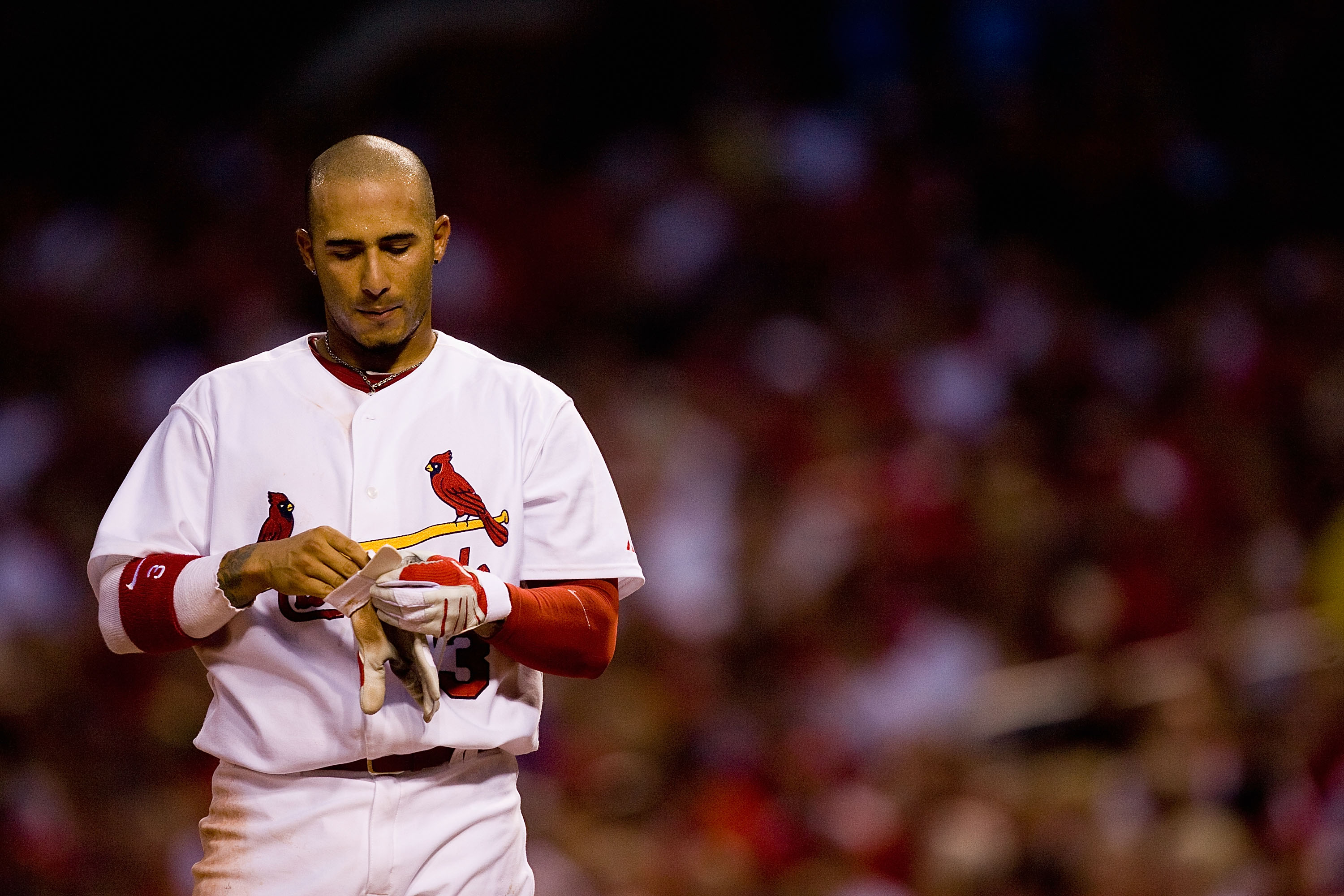 When the Cardinals signed Felipe Lopez to a one-year deal just before spring training, I thought it might be the steal of their offseason.

Here was a guy who hit .385 with the Cardinals in 2008, and was fifth in the league in hits last year, coming to play in St. Louis for just $1 million.

Sadly, things weren't meant to be. Lopez has quite possibly been the Cardinals' biggest disappointment this season, on both offense and defense.

At the plate, Lopez is batting just .238, a career low. His on-base and slugging percentages are also down about 60 points.

And although Lopez hasn't been a good defender since high school, his defense has reached its nadir this season, as evidenced by his dismal .925 fielding percentage.

His UZR of -0.4 isn't as bad as some other Cardinals, but he's certainly hurting this team, both at the plate and in the field.

No. 9: The Middle Infield 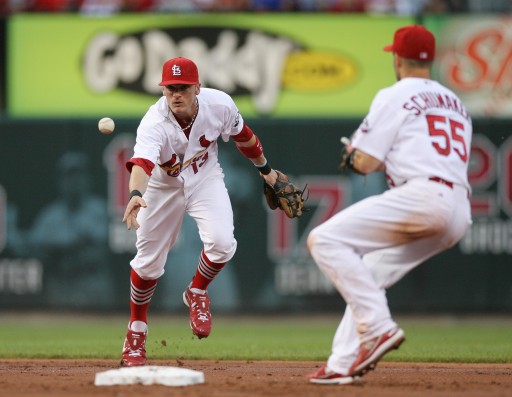 Coming into the season, the middle infield wasn't supposed to be a strong point. Skip Schumaker and Brendan Ryan are far from All-Stars.

However, no one could have predicted the offensive void the Cardinals would have gotten out of second and shortstop.

After batting .302 in his first full season, in which he placed top ten in singles, Schumaker has faltered this season, hitting only .269, and putting in a career-low .344 on-base percentage...far from what the Cardinals wanted out of their leadoff hitter.

Schumaker, a converted right fielder, has also struggled at second. His .970 fielding percentage and -13.6 UZR are among the league's worst at the position.

With a combination of offense and defense, Schumaker was named one of Joe Posnanski's 10 worst everyday players.

Brendan Ryan has been an absolute offensive nightmare. His average currently stands at .218, and he's been below the Mendoza line for most of the season.

What's even more amazing is that his on-base percentage and slugging percentage are below .300.

As opposed to Schumaker, the Cardinals are willing to barter with Ryan's offense in exchange for his glove. He has excellent range at shortstop and has turned many hits into outs.

To be fair, both of these guys have turned it around lately, but their early play didn't help St. Louis when they had a good shot at the division. 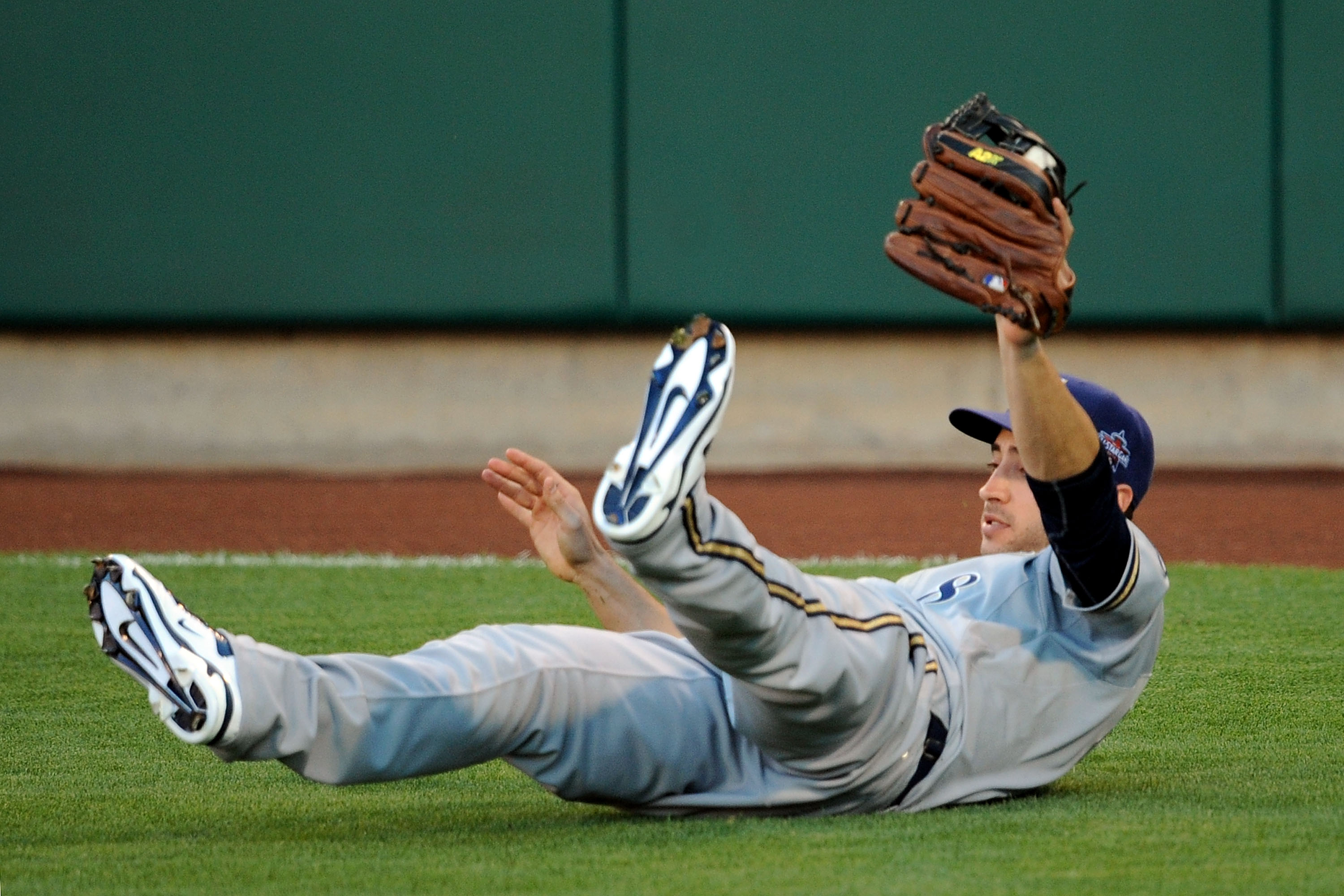 Originally, this slide was supposed to be about losing close games. But when I looked over the numbers, I realized that St. Louis' losses in close games have been partially due to bad luck.

But once the Cardinals get down, they either run into some bad luck or simply get down on themselves, because when trailing in the game, their BAbip is just .286.

Something has to account for that .012 difference, whether it's just bad luck or a bad attitude. They also have a .218 BAbip on ground balls, while the league average is .236.

So, although it can't be blamed for all their problems, it's fair to say the Cardinals have fit into their share of outs. 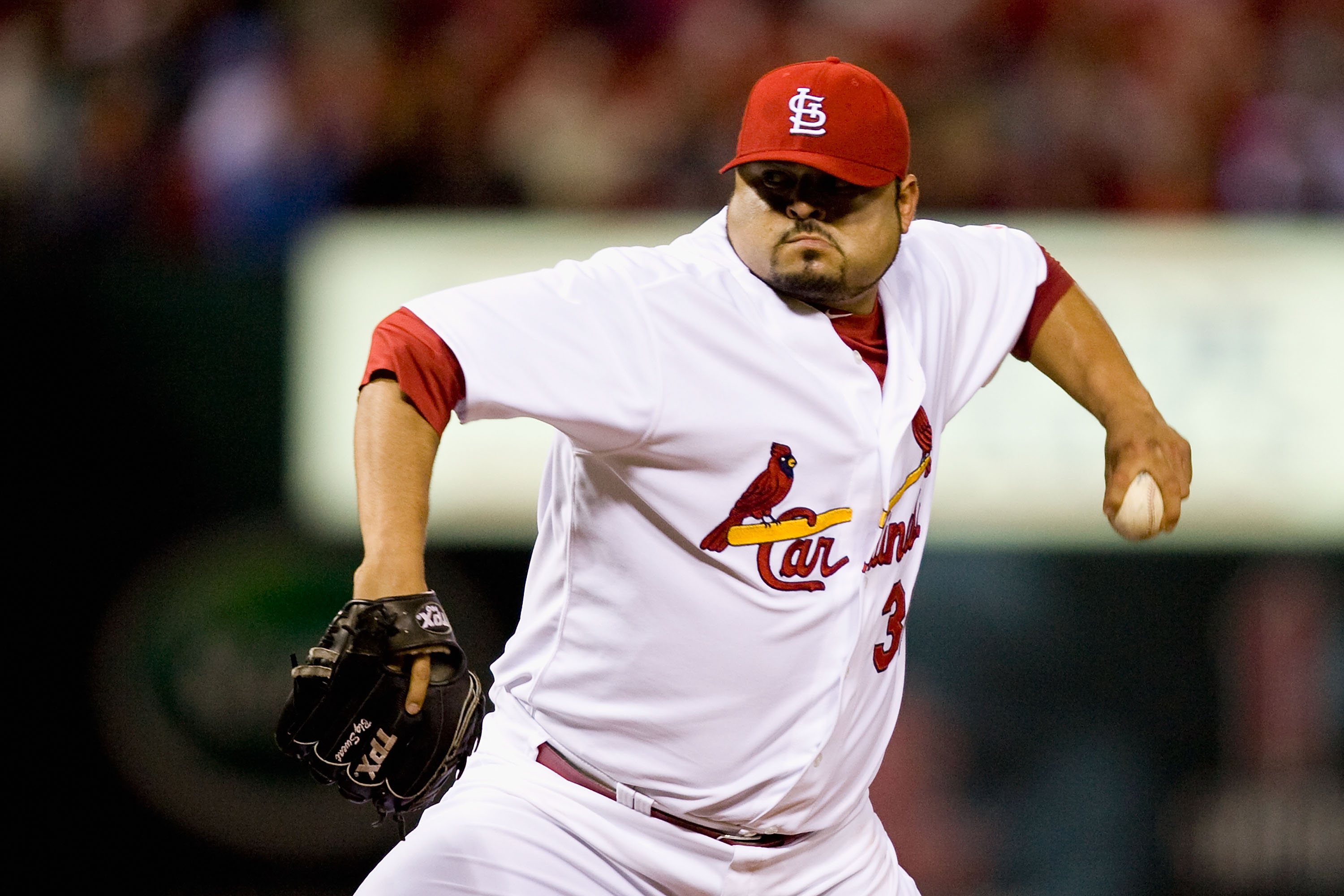 As with a torrid hurricane, if you want to withstand in a long pennant chase, you need a good relief corps.

Something St. Louis has lacked for much of the season.

Of Cardinals with 30 or more appearances, only Jason Motte and Kyle McClellan have an ERA under 3.00, and only McClellan and Ryan Franklin have a WHIP under 1.100. Only Franklin has a K/BB ratio above 3.50.

So clearly, the Cardinals relievers are not the best.

Things culminated in a game against the Rockies, in which Dennys Reyes and Ryan Franklin gave up a combined nine runs in the ninth, the most by any Cardinals team since the 50's. Since then, any call to the bullpen comes with a certain level of caution.

From the left-handed side, they've been especially disappointing. Trever Miller and Dennys Reyes, who were rocks for the Cardinals in 2009, have struggled, especially Reyes, who has a WHIP of 1.469, and lefties hit .286 against him.

The disappointing performance from the 'pen has contributed to the failure of the 2010 team. 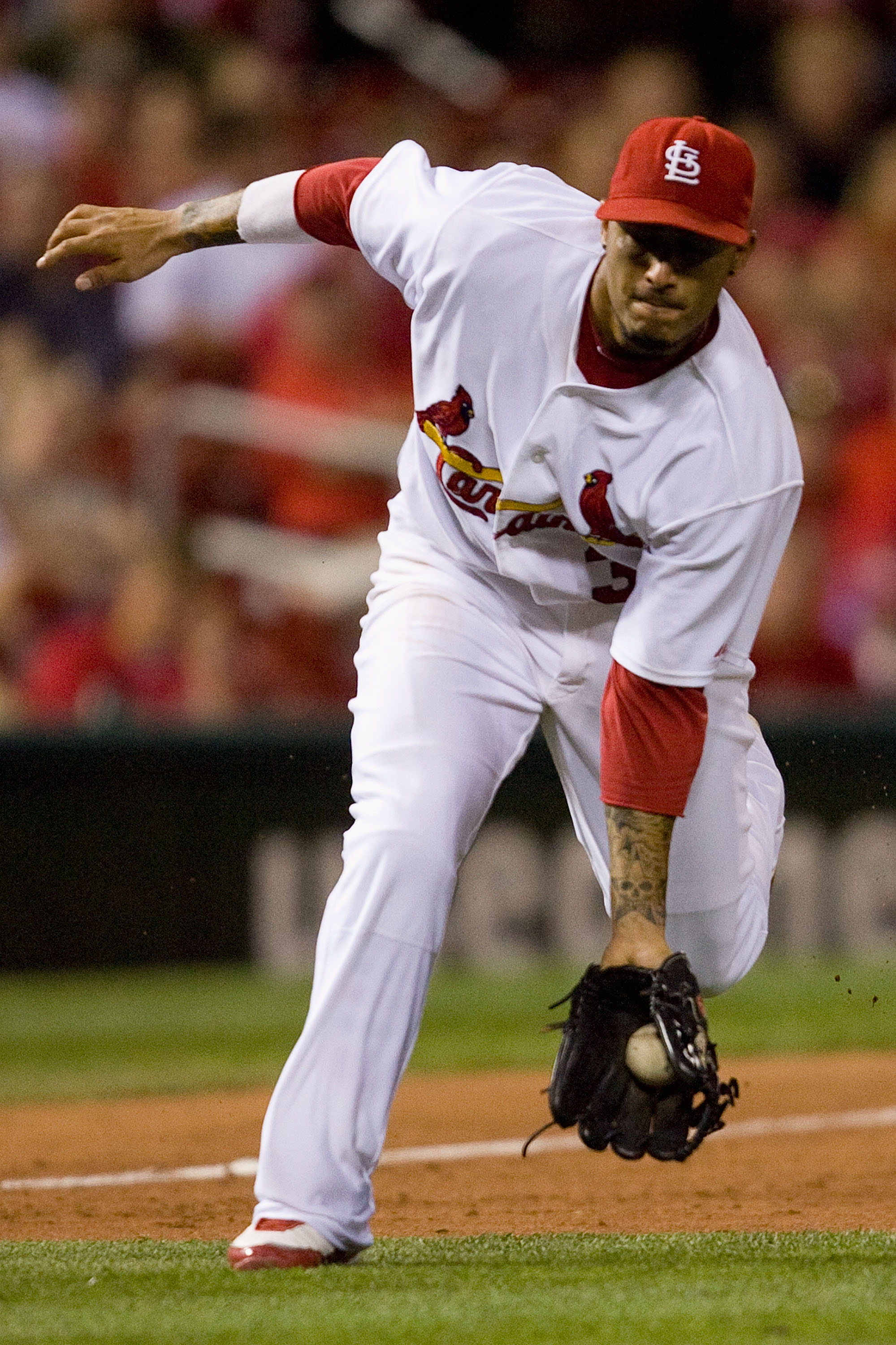 Although it wasn't expected to be a strong point for this year's team, the shoddy play of St. Louis' defense has held anchor them down, dragging them out of first place.

They rank behind Cincinnati in fielding percentage and defensive efficiency.

The biggest problem has been third base. David Freese and Felipe Lopez have combined for a .939 fielding percentage.

Led by Scott Rolen and Miguel Cairo, Reds third basemen are the best defenders in the National League.

Felipe Lopez's frantic arm has given up more than a few runs this season. When the baseball is hit to third, Cardinals fans hold their collective breath.

Although it wasn't seen as a strong point coming into the season, poor defense hasn't helped the Redbirds in their quest for a 18th pennant. 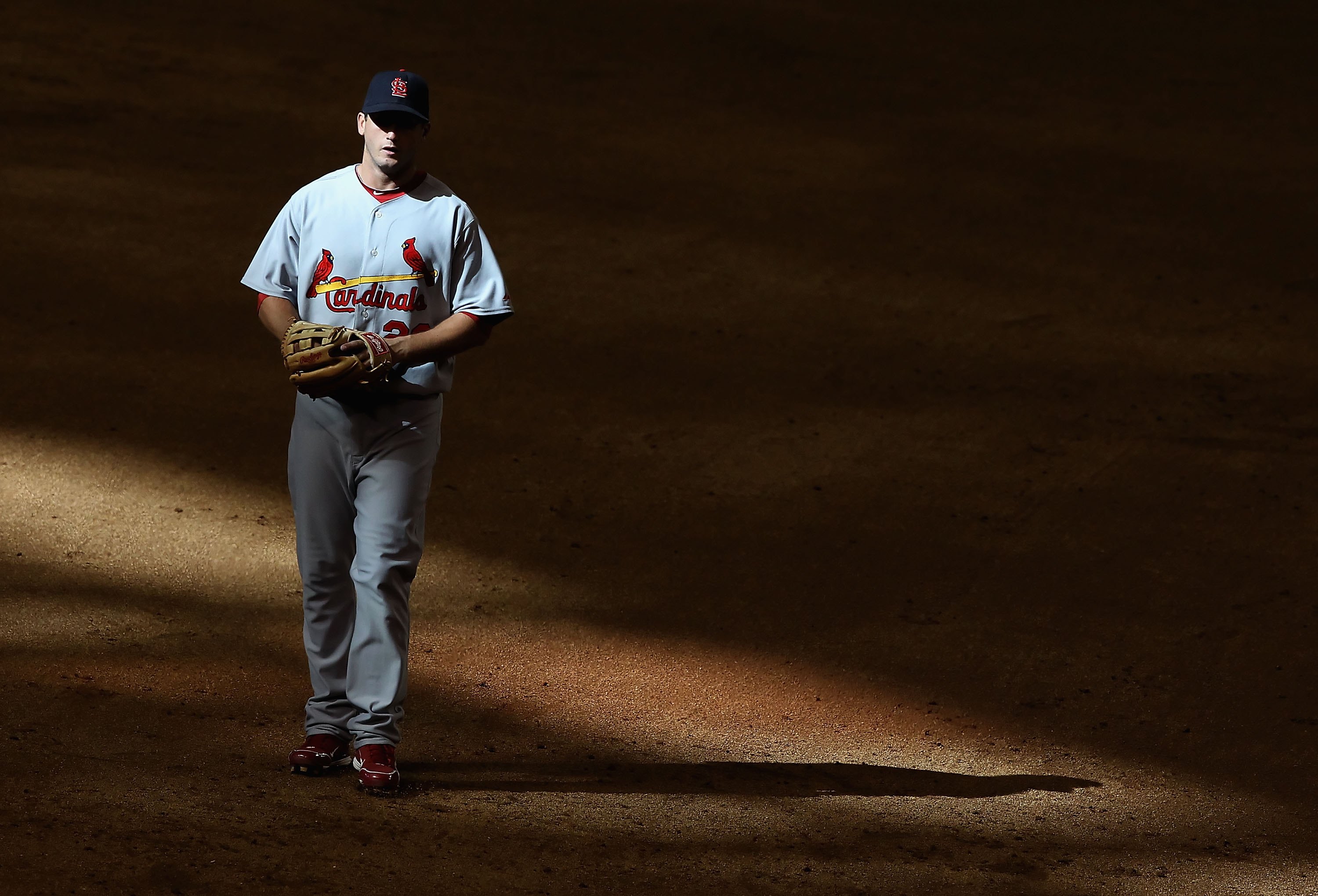 For most of the season, the Cardinals had six reliable bats in their lineup. However, with the trade of Ryan Ludwick and David Freese's season ending ankle injury, the team has faltered.

Without Freese, the Cardinals have suffered both offensively and defensively.

The Cardinals especially miss Freese's bat in clutch situations. According to baseball-reference.com, the average player with 270 PA with runners in scoring position will drive in 29 runs.

Freese, however, knocked in 36. Before going down, he had four go-ahead hits in just 70 games.

His .324 batting average with runners in scoring position was among the league's best.

He obviously impacted the team's performance, because in games that Freese started, the Cardinals were 37-27.

Since being removed in the sixth inning of a game with the Royals, the Cardinals have been just above average, going 29-28.

When Freese went down, so did the Cardinals' chances at the division. 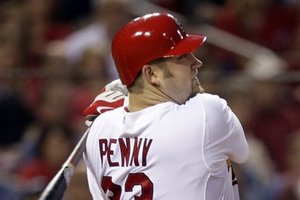 On May 21, the Cardinals saw their biggest home run of the season. Unfortunately, it was for all the wrong reasons.

With the bases loaded and two out in the third inning of an interleague game with the Angels, pitcher Brad Penny stepped up to the plate to face former Cardinal Joel Piñiero.

He promptly hit the first pitch he saw over the left field fence at Busch Stadium, giving St. Louis an 8-4 lead, and, eventually, the win.

But what happened after is the bigger story. As a result of the home run, Penny was injured with what was classified as a "grade I strain" of his right lat. He said that it had bothered him in his previous start against Cincinnati.

Afterwards, St. Louis placed Penny on the 15-day DL, and the Cardinals haven't heard from him since. It appears possible that Penny will not be returning this season.

Although he remains optimistic, the Cardinals have still suffered in his absence, going 18-31 in games not started by Chris Carpenter, Adam Wainwright, or Jaime Garcia.

What many people forget is that Penny was one of the reasons the Cardinals could claim the best pitching staff in baseball.

In fact, he was seen as an early Cy Young favorite after starting the season 3-0 with an ERA of 0.94.

With Penny, the Cardinals would be faring much better in the pennant chase.

No. 3: The Reds Are Just That Good 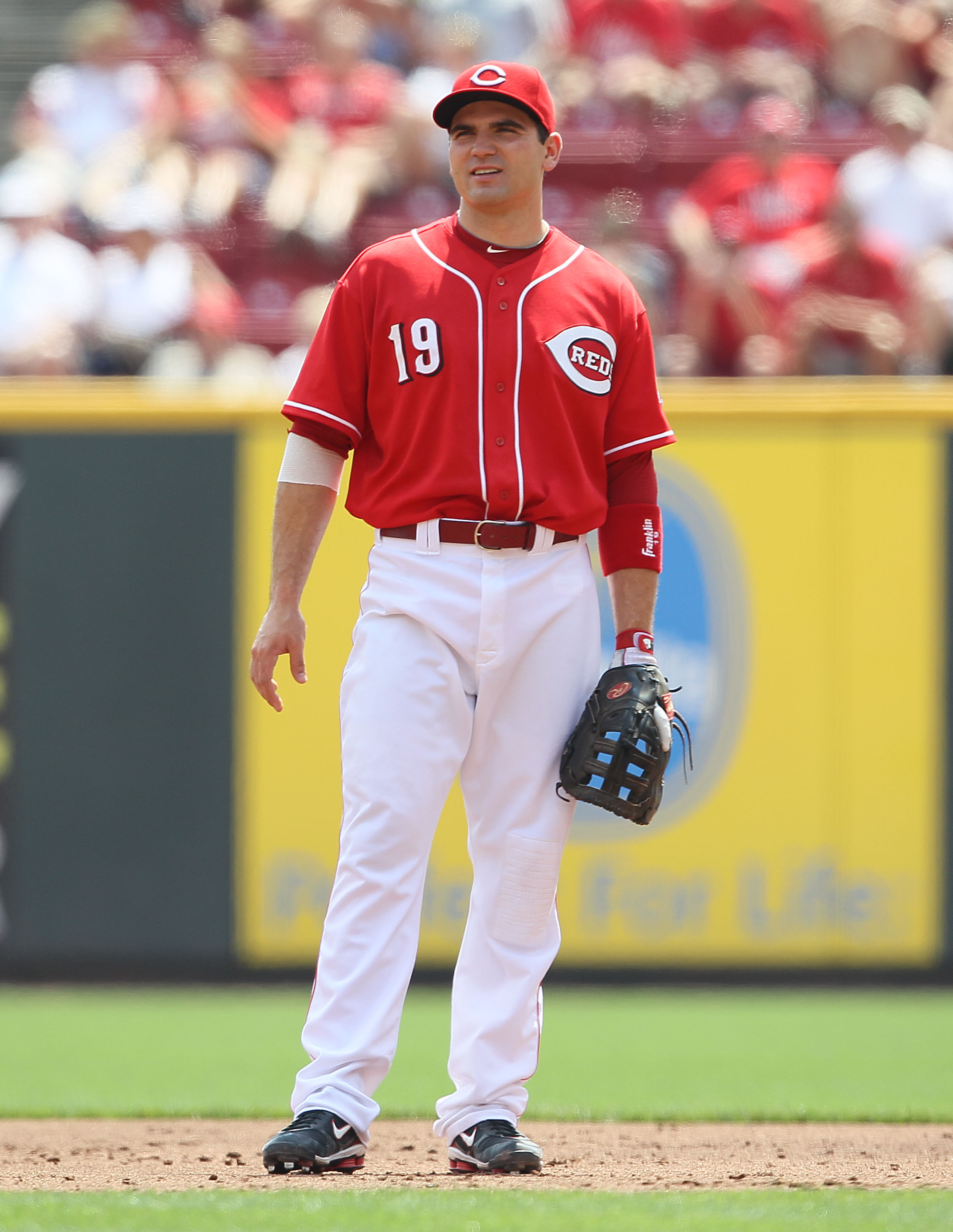 To be fair, the entire fate of the 2010 season can't be placed on the Cardinals.

The Cincinnati Reds have defied all expectations, and are having a fantastic season offensively, leading the National League in runs, batting average, slugging percentage, OPS, and total bases.

They're currently one behind Arizona for the lead in homers.

Their pitchers are not too shabby, either. Despite having an average age of 28.4, the Reds' starters rank near the top in several pitching metrics also.

Although a lot of the blame can be placed on the play of the Cardinals themselves, don't sell the Reds short. This is a team that is built for October baseball. 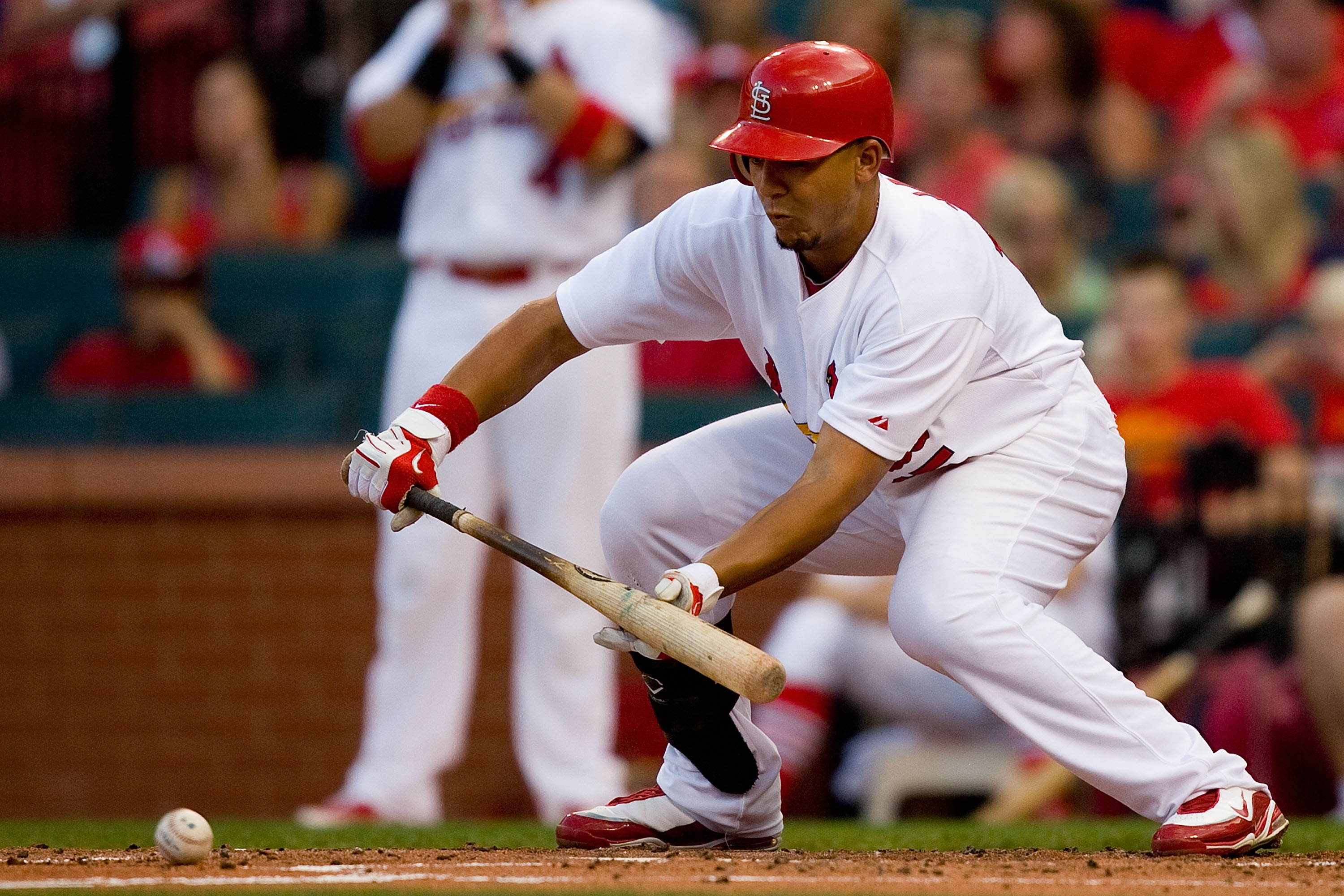 Despite having two of the National League's top hitters, the Cardinals' biggest woe has been an inept offense, especially in the key situations.

Despite trailing only Cincinnati in batting average and having the second fewest strikeouts, the Cardinals have been unable to push runners across, which is why they rank eighth in runs scored.

In fact, outside of Pujols, Holliday, and Colby Rasmus, this has become a lineup of easy outs.

Outside of those three, no players have an on-base percentage above .350, and only Felipe Lopez is slugging above .350.

Only Pujols and Holliday are batting above .300, until Jon Jay has enough plate appearances.

Clearly, teams have figured out that once they get around Albert and Matt, it's smooth sailing.

No. 1: The Ryan Ludwick Trade 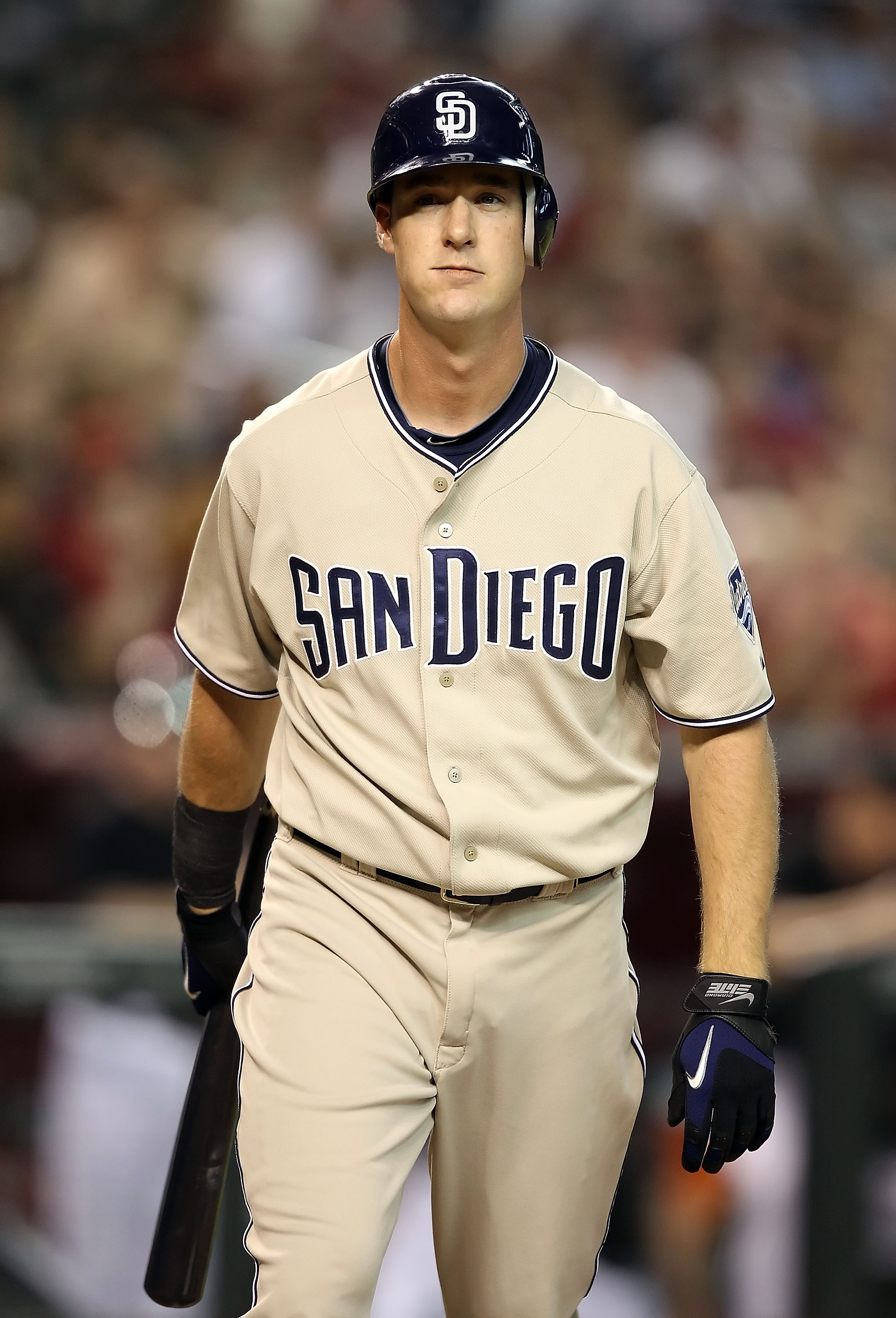 This is going down as one of the worst deals in Cardinals history, even if St. Louis does make the playoffs.

Just look at these stats:

This move doesn't make much sense now, and it made even less sense then.

Trading one of your three or four power hitters for a good but not great starter, something you have an overflow of? It befuddled the best minds in baseball.

Granted, Westbrook has improved with the Cardinals, as evidenced by his career bests in nearly all major pitching categories, and Ludwick has struggled in PetCo, a spacious pitchers' paradise.

This trade was a climax of most of the other problems that St. Louis has had: lack of production from the fourth and fifth starters led to this trade, which then triggered a series of deeper problems, including weakening the offense, bringing Jon Jay back to earth, and, most notably, failure to win close games.

With Ludwick, I say the Cardinals are at least leading the Wild Card race, and still contending for the division.

I showed you the raw stats, but look go deeper, and it's clear that this trade was the beginning of the Cardinals' August woes.

For starters, before the trade, St. Louis had 5.37 runners left on base/PA (taking into account the 20-inning game with New York).

Since then, the number has climbed to 5.47, which might seem like a small difference, until you look at the scores of St. Louis games.

Of the Cardinals' 16 losses since the deal, only three have been by four runs or more. That means that, given a few more timely hit, they had a shot to win several more of those games.

Things got even worse recently, when the team lost 13 of 17 games, falling eight back in the Central.

Now, over that span, the Cardinals only lost one game by four or more, and got three of their four wins by four or more. Close games have killed this team.

That's where Ludwick comes in.

Ryan Ludwick, unlike the current Cardinals lineup, thrives under pressure. Trading him was the biggest mistake John Mozeliak has made as General Manager.