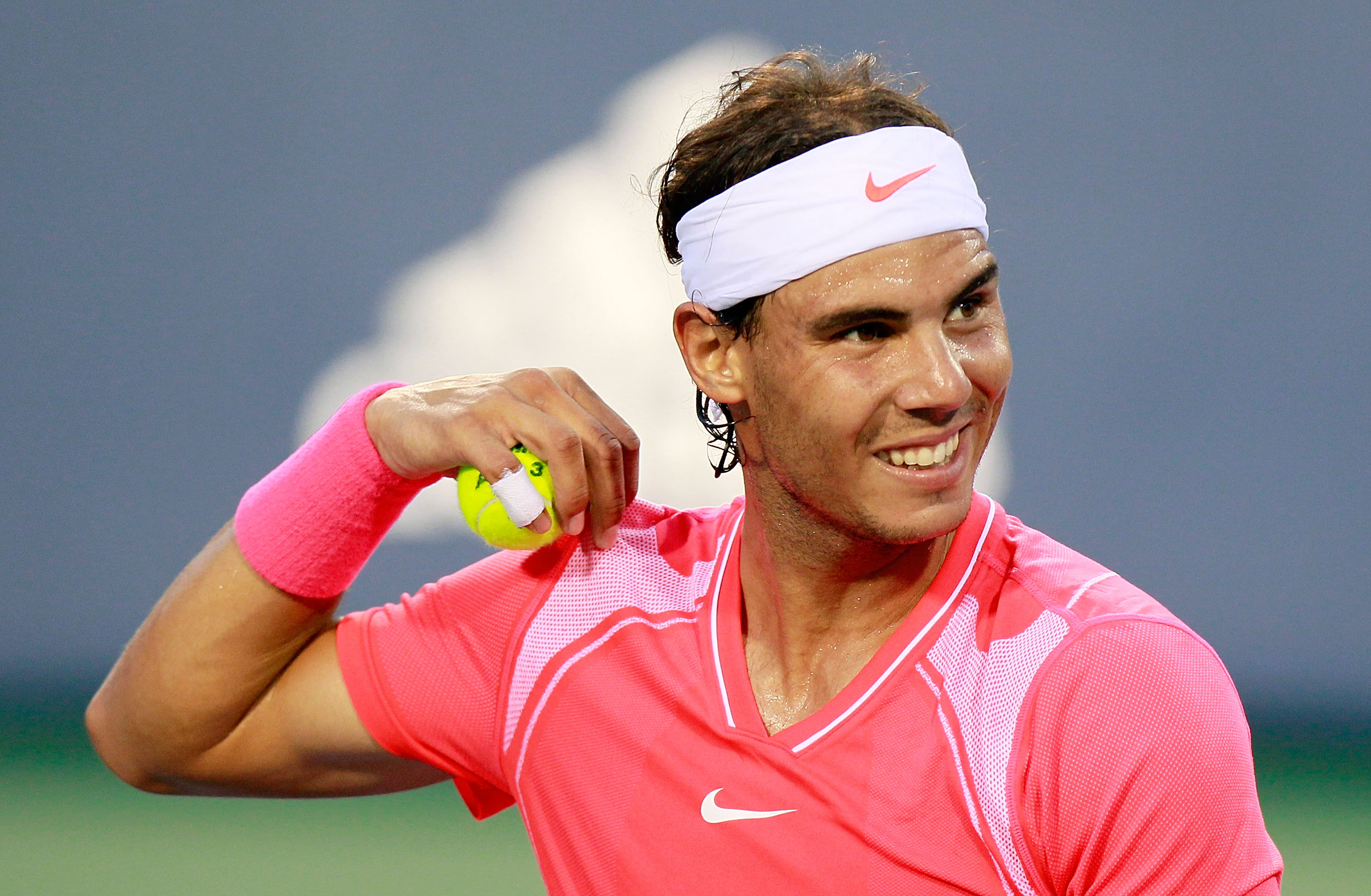 It may seem blasphemous to say that Rafael Nadal, the No. 1 ranked tennis player in the world, will never complete his career Grand Slam.

Yet the 24-year-old lefty from Spain will never win the U.S. Open, no matter how many times he enters the tournament field.

As the U.S. Open kicks off this year, tennis fans will have the pleasure of watching Nadal hit winners and win matches during the beginning.

Enjoy it while it lasts. Here are 10 reasons why Rafa will never win the U.S. Open.

Reason 1: Past History at the Tournament 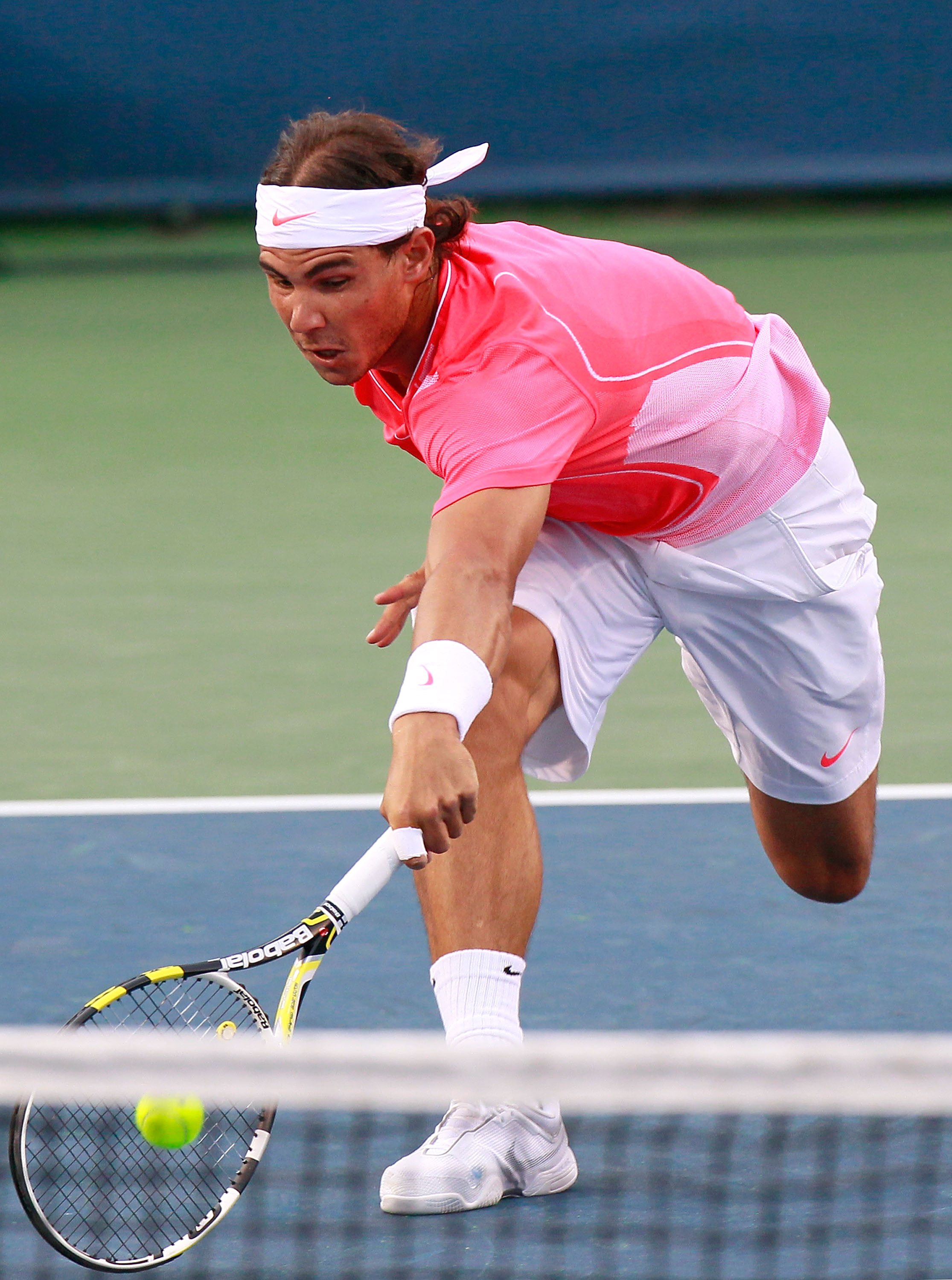 Nadal beat fellow Spaniard Fernando Vicente in straight sets before falling to Younes El Aynaoui in the second round. Although Nadal lost to the man from Morocco, he did manage to push two of the three sets to tiebreakers. El Aynaoui reached his career-high ATP ranking this year at No. 14.

Nadal used all five sets to knock out Ivo Heuberger in the opening round of this tournament. However, he was quickly defeated by the second-seeded Andy Roddick 0-6, 3-6, 4-6.

This was Nadal's first year in the U.S. Open where he was listed as a seeded player. As the No. 2 seed (behind Federer), Nadal swept his first two matches against the Americans Bobby Reynolds and Scoville Jenkins. He ran into James Blake, his third-straight American opponent, next and was defeated in four sets.

Once again, Nadal received the second seed in the tournament. In the first round, he beat Mark Philippoussis 6-4, 6-4, 6-4 then advanced to the third round by taking out Luis Horna in four sets. He won the next six sets he played, three against Wesley Moodie and three against Jiri Novak, to reach the quarterfinals for the first time in his career. Nadal failed to advance further though when he lost to unseeded Mikhail Youzhny 3-6, 7-5, 6-7, 1-6.

Nadal took a step backwards in 2007 when he only made it to the fourth round. Nadal dominated Alun Jones in the opening round then advanced to the third round when Janko Tipsarevic retired during the match. Nadal was leading the match 3-2 in the third set and had already won the first two. He then beat Jo-Wilfried Tsonga in straight sets before falling to fellow Spaniard David Ferrer in four sets.

In 2008, Nadal finally advanced to his first U.S. Open Semifinals. For the first time, Nadal went into the tournament as the No. 1 overall seed. The Spaniard didn't lose a set in the first three rounds. By that time he had knocked Bjorn Phau, Ryler DeHeart, and Viktor Troicki out of the competition. Nadal advanced to the quarterfinals by beating Sam Querry in four sets and then made it out of the quarterfinals by beating Mardy Fish. Andy Murray, the sixth seed in 2008, beat Nadal in four sets before losing to Roger Federer in the Finals.

This year Nadal was the No. 3 seed and only dropped two sets on the way to the semifinals. The two sets were the second set in his second round match against Nicolas Kiefer and the first set against his fourth round opponent, Gael Monfils. He also beat Richard Gasquet, Nicolas Almagro, and Fernando Gonzalez in the tournament. However, Nadal ran into the eventual champion Juan Martin del Potro in the semifinals and lost all three sets 2-6, 2-6, 2-6.

Reasons 2 and 3: His Left Knee and His Right Knee 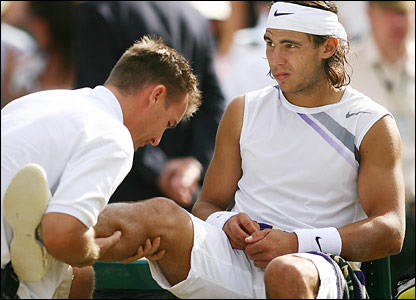 Throughout Nadal's brilliant career, he has been plagued by knee problems.

His first well-publicized knee injury came all the way back in 2005 when Nadal had to fight through the knee injury he suffered during the finals of Wimbledon for the rest of the year.

Nadal's knee problems next flared up in the quarterfinals of the 2008 BNP Paribas Masters. Nadal was playing Nikolay Davydenko and withdrew from the match citing a knee injury. He had already lost the first set 1-6. The next week he withdrew from both the Tennis Masters Cup in Shanghai and the Davis Cup final against Argentina due to apparent tendonitis in his knee.

This put a major damper on Nadal's achievements earlier in 2008. That was the year that he became the first Spaniard to finish the season ranked No. 1 in the Open Era.

During the 2009 season, Nadal traveled out to Rotterdam to participate in the ABN AMRO World Tennis Tournament. He made it to the finals before a knee injury clearly affected his play against Andy Murray.

After calling a trainer out onto the court, Nadal learned that he had a problem with a tendon in his right knee, an injury that was separate from his ongoing tendonitis problems. The injury forced him to withdraw from the Barclays Dubai Tennis Championships the next week.

After his surprising early exist at Rolland Garros, Nadal withdrew from the AEGON Championships and revealed that he now had tendonitis in both knees. A flareup caused him to also withdraw from Wimbledon.

The next major problem came in the 2010 Australian Open when Nadal was forced to withdraw in the quarterfinals against Andy Murray. Upon examination, doctors advised the Spaniard to rest for two weeks and then rehab for the next two after that.

Now, let's be honest. Who hasn't seen Nadal play with hurt knees? All tennis fans have by now.

The pounding on the hard courts at the U.S. Open will never help that and the problems only figure to get worse as time goes on.

Nadal's career may end up being cut short by his knee troubles so if he's going to win a U.S. Open, the time is now. He has stated that he is fully healthy for this year's tournament, but there's no telling how long that will last.

Reason 4: The Time of Year 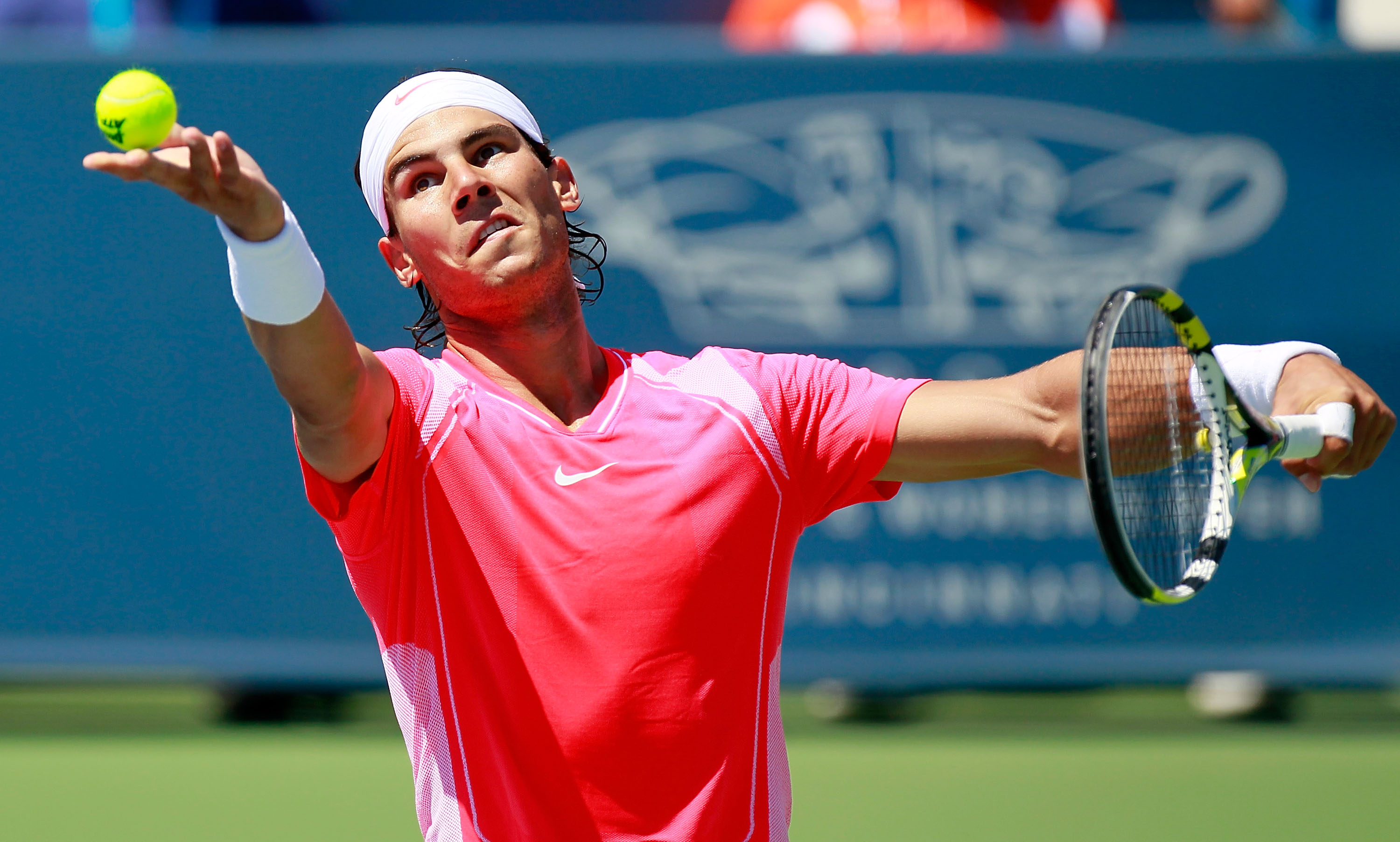 Unfortunately for Rafael Nadal, the U.S. Open doesn't start until the end of August.

With the length of the tennis season, this means that the Spaniard will always have played a whole lot of tennis prior to this tournament.

It's always hard to win tournaments, but it's especially difficult when you're tired from a grueling schedule throughout the year.

If this tournament were earlier in the season, Nadal may have already gotten to hold up the trophy a few times. But for a player who is constantly battling injuries, it's very tough for him to be completely healthy when August and September roll around.

Reason 5: The King of Clay 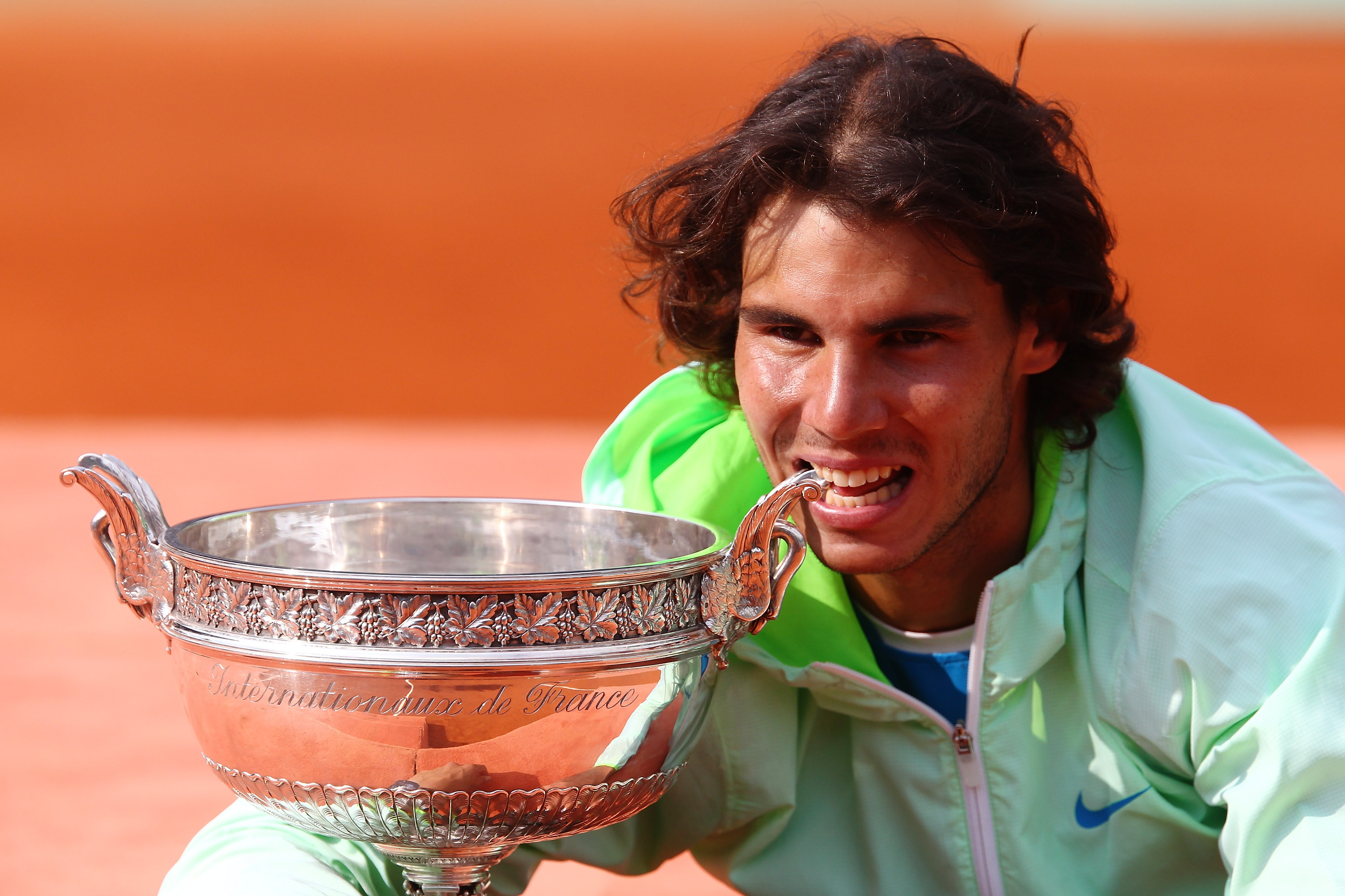 He's 203-16 on clay courts in his career, good for a .927 winning percentage and the record among male players for the quickest to reach 200 wins.

He also holds many records at the French Open, the premier clay court event. The following are records that Nadal either holds alone or shares for French Open performance:

But, you may ask, what does his dominance on clay have to do with his performance at the U.S. Open?

Well, the answer is quite simple and sticks with the theme of fatigue that has been so important so far.

Nadal, the "King of Clay," is very good on clay and plays in a lot of tournaments on clay. As a result, he ends up playing a whole lot of matches because he just never seems to lose on the surface.

This just leads to more and more fatigue. It's not like Nadal can avoid playing in clay tournaments because it would almost be like handing away trophies if he did. 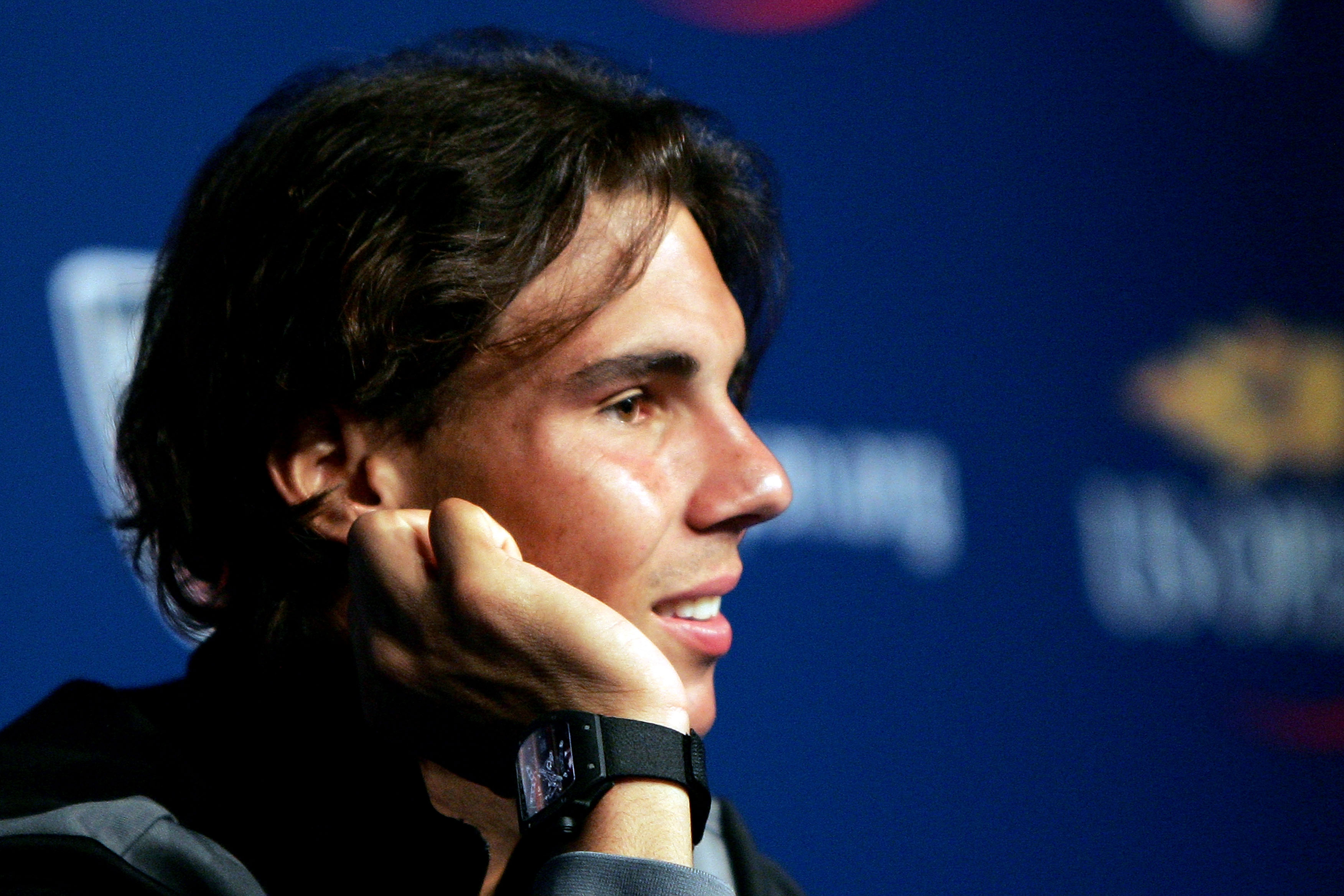 Nadal's will to win and resilience are two of the strongest part of his game. He desperately wants to win this tournament and add the trophy to a mantle already full with ones from the three other Major Championships.

In many cases a desire to win one tournament above all others is beneficial but sometimes it just doesn't work that way.

It remains too soon to tell, but there is a chance that Nadal is putting too much pressure on himself and could go on hurting his chances of winning by simply wanting it too much. 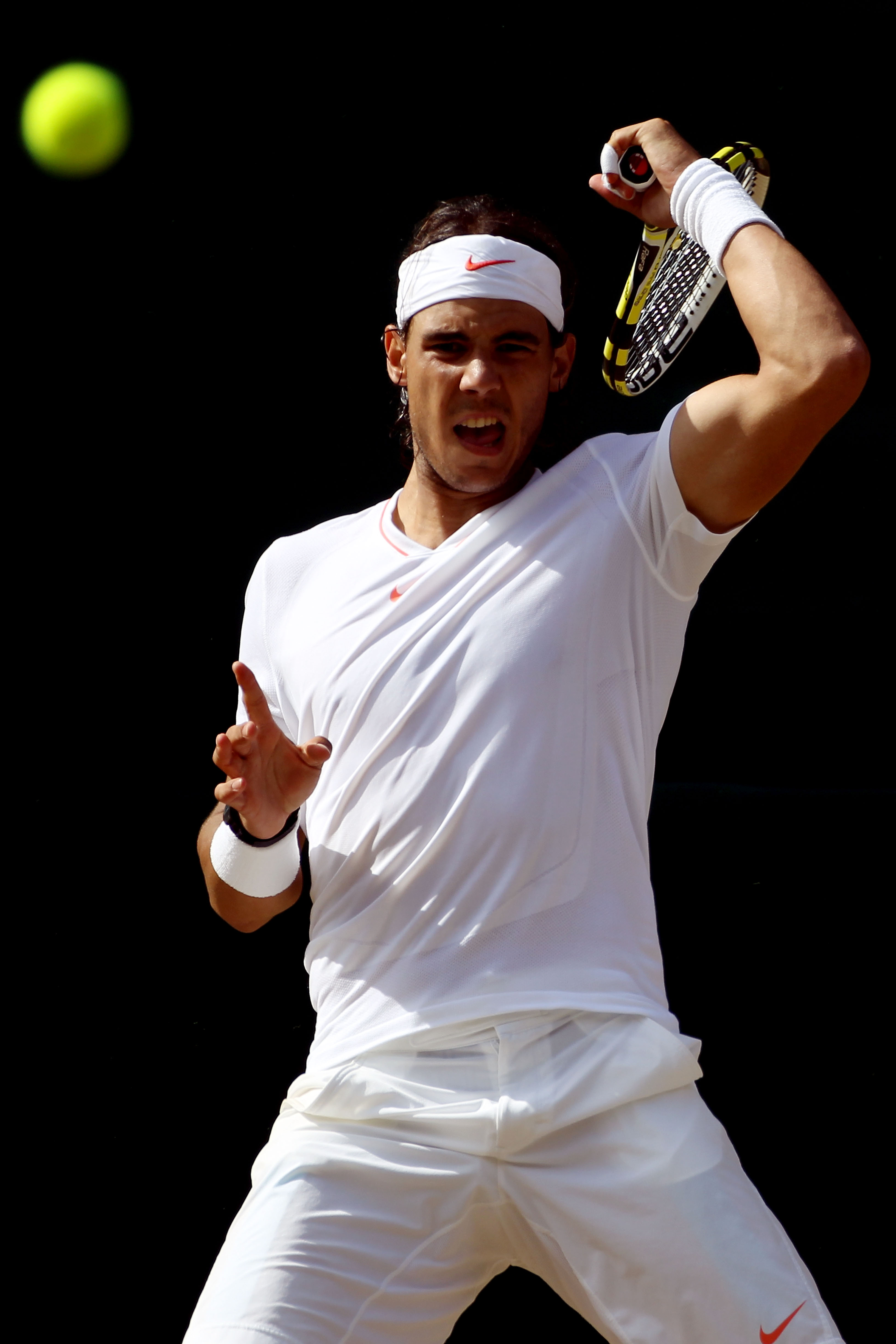 He plays aggressively and relies on his ability to chase down balls, his footwork, his consistency, and the forehands he hits with so much topspin.

Those forehands tend to land significantly short of the baseline and bounce high and long. This negates the advantage a player would normally have when his/her opponent hits short shots.

Now, there are multiple problems with hitting those high-spin shots at the U.S. Open.

For starters, the ball at the U.S. Open is slightly different than the ones used at the French Open and doesn't allow Nadal to put quite as much spin on the ball as he would like. The hard courts also cause the ball to bounce more predictably and takes away some of his advantage.

Although he has improved his serve dramatically, he still relies on consistency and not sheer power. On hard courts, power is much more useful and he would benefit dramatically from the ability to not just consistently get serves in, but also to consistently ace his opponents.

With the speed of opponents serves in Flushing Meadows, Nadal also tends to return balls much shorter and gets himself into trouble.

Finally, Nadal plays with a very physical style. Nadal himself says that he sometimes has trouble on hard courts and may need to change his tour schedule to include fewer hard court tournaments.

The wear and tear from the courts at Flushing Meadows may always cause his level of dominance to drop as the tournament goes on into the later rounds. 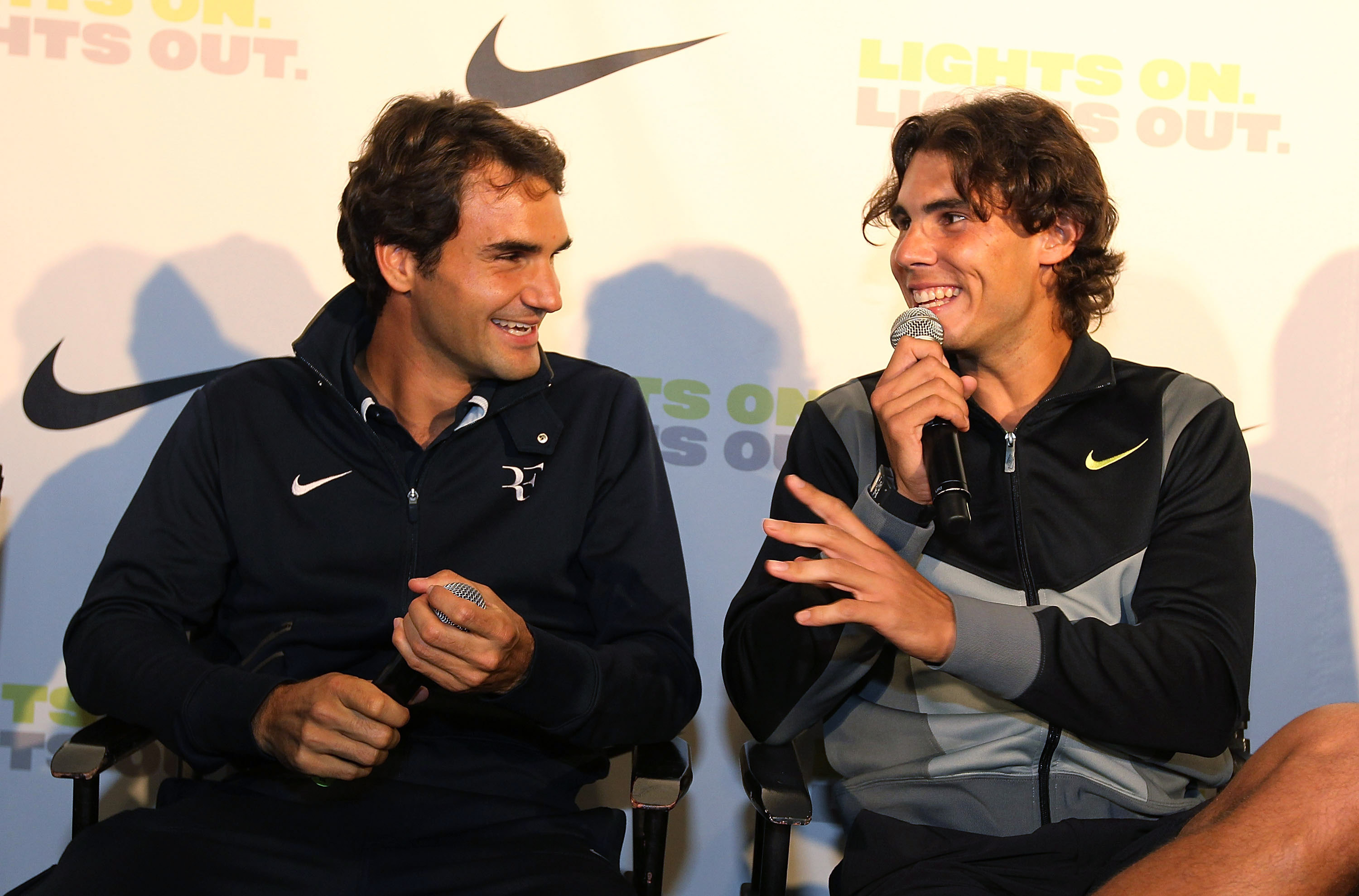 It seems as though everyone is in agreement that Roger Federer's career is on the decline, but it's too early to say that. He is still one of the most dominant players in tennis and arguably one of the greatest tennis players of all time.

Not to mention the fact that he is still Rafael Nadal's No. 1 rival.

Nadal and Federer have played each other 21 times in their careers, the first matchup dating all the way back to 2004. While Nadal leads the series 14-7, that record does not tell the whole story.

10 of Nadal's 14 wins against Federer have come on clay courts, and obviously, the U.S. Open is not held on one of those. On hard courts, the head-to-head record is even at 3-3.

The Nadal train has been stopped by Federer multiple times in his career, and the Swiss tennis wizard is not yet done making Nadal's road to championships harder.

This year, the only way the two can meet is if they play in the finals, and there's no telling if that will continue to be the case in the future.

But one thing is for sure, Federer will never let Nadal walk all over him and while he's still around, he poses a serious threat to Nadal's title hopes. 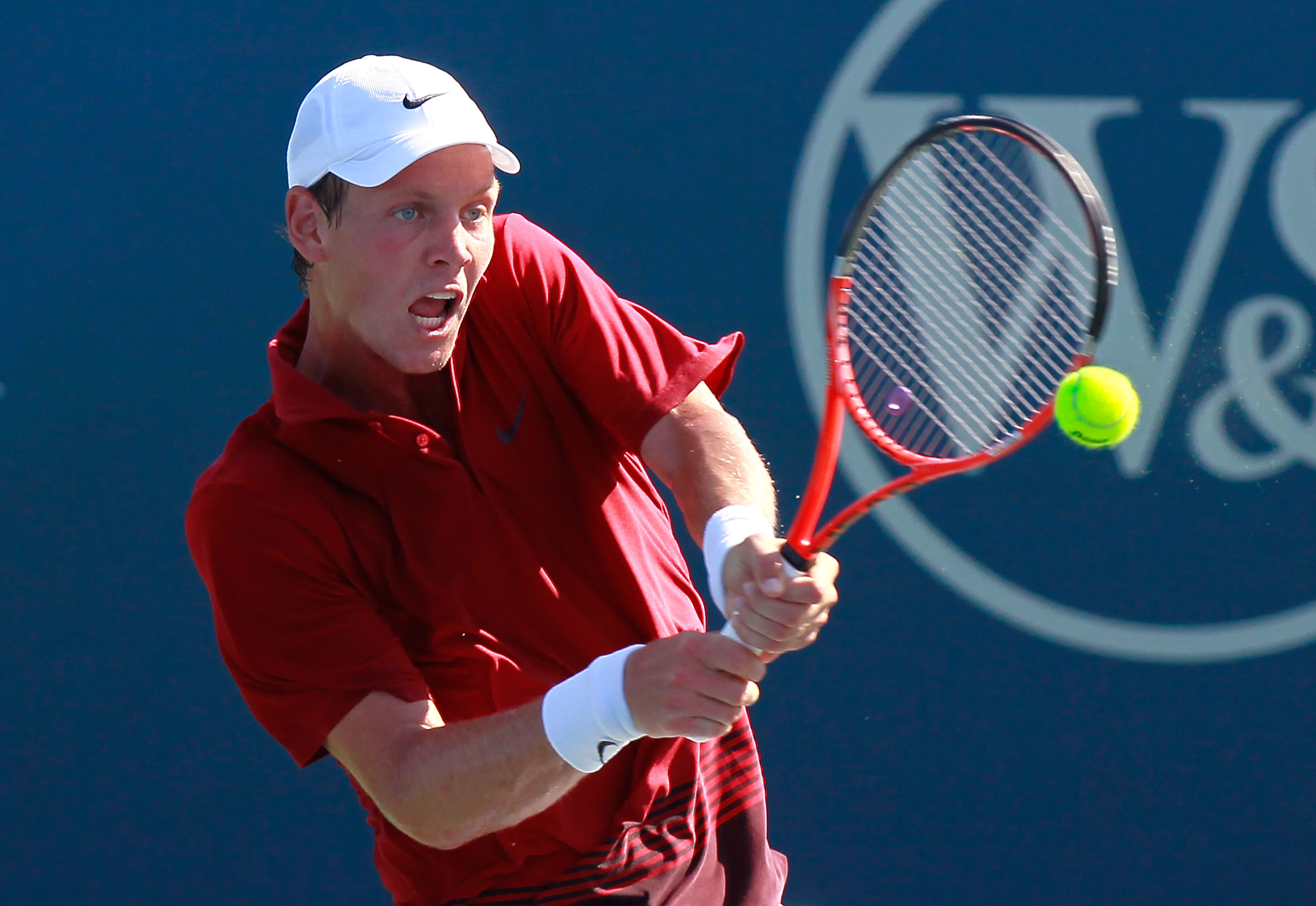 Tomas Berdych is a great example of the type of player that will always pose a serious threat to Nadal's chances of winning the U.S. Open.

The No. 7 ranked player in the world has beaten Nadal three times already on hard courts.

Power hitters are going to have the advantage against Nadal during this tournament because of the Spaniard's playing style, and Berdych is only one example.

Reason 10: Players Yet to Be Named 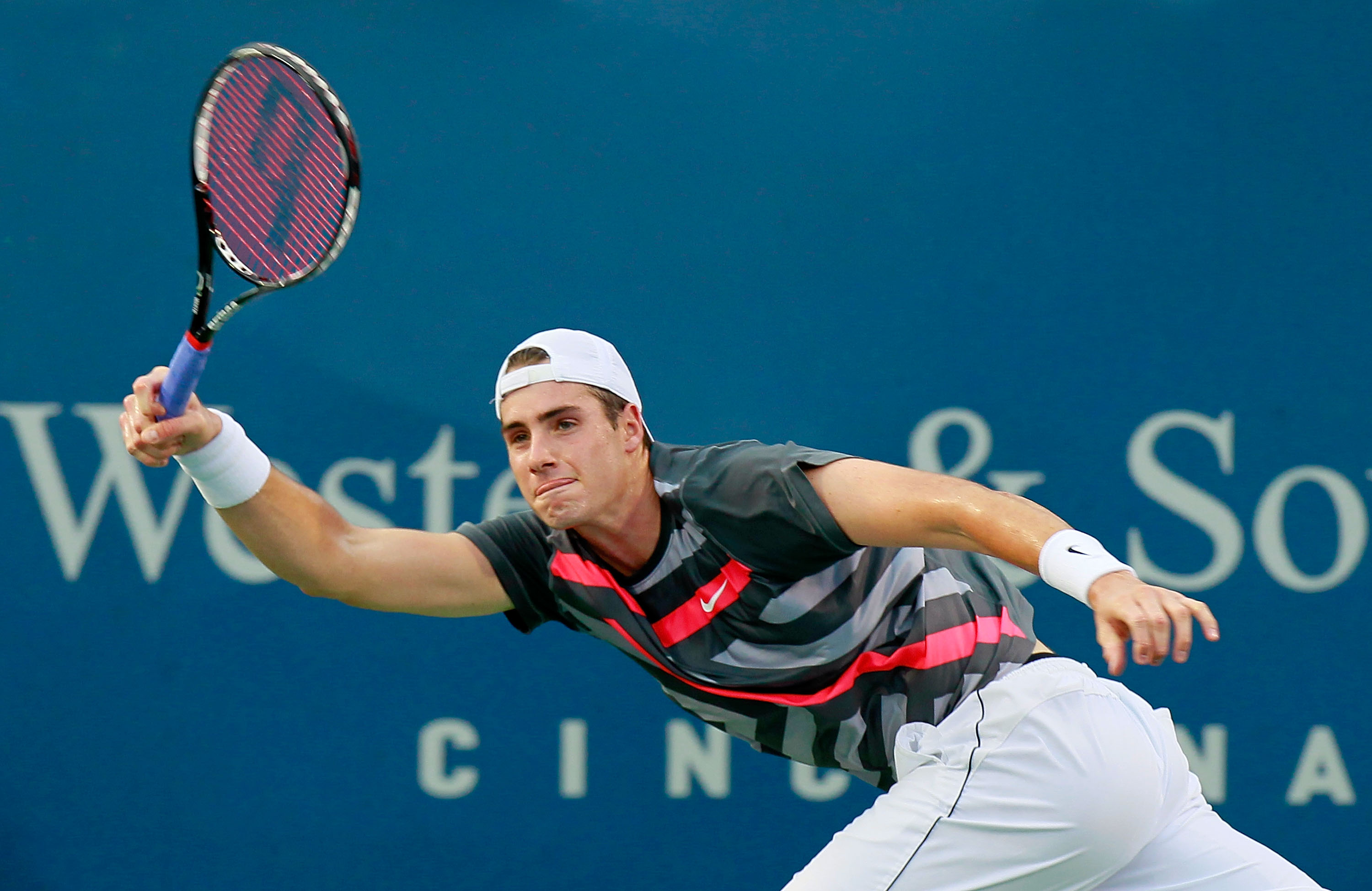 The tennis landscape is always changing.

Just as the reins were handed over to Federer and Nadal from Agassi and Sampras, the current stars will eventually have to give way to the next generation of superstars.

There are always going to be good young players, and while we don't know who they are yet, there will eventually be some.

It is very plausible that one of those players becomes a dominant force soon and minimizes Nadal's chances of ever hoisting this trophy.