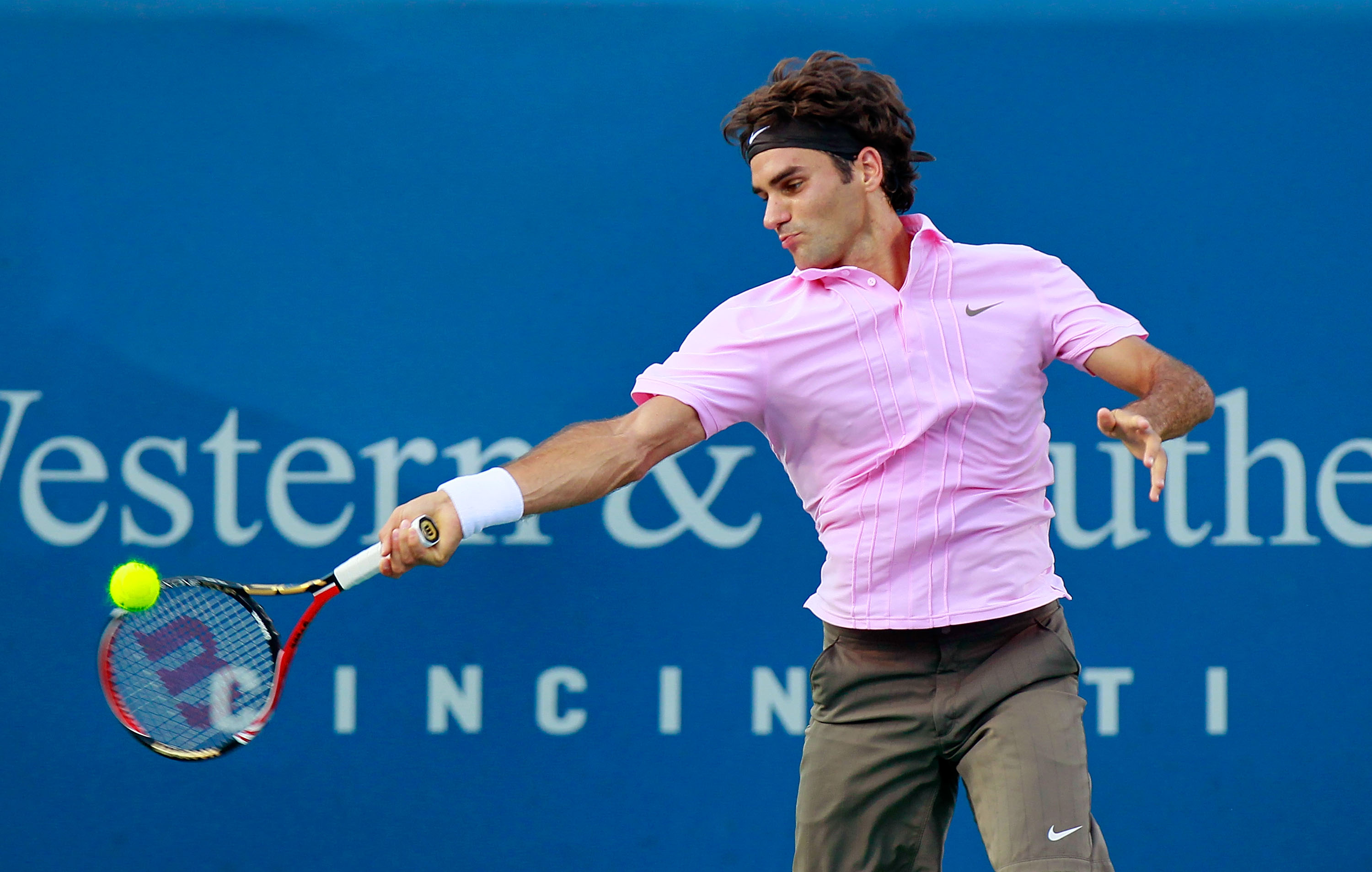 In Montreal, the women’s tour is rushing towards the final stages of the Rogers Cup.

The tennis, just as the men’s was in Toronto, is pulsating. Vera Zvonareva pulled Kim Clijsters back to win a semifinal place and Caroline Wozniacki is coming into top form, just as she did for the U.S. Open last year.

However, many headlines have been devoted not just to the women’s tennis, but also to their catwalk skills.

It’s become a tradition, on opening Sunday, for the Players’ Party in this tournament to include a fashion show modeled by the players themselves.

The men missed out on all the fun during their Rogers Cup event, as they played in Toronto this year—though memories of Novak Djokovic strutting his stuff in black silk last year will last a good while.

The male of the species, therefore, has had to up the sartorial stakes, and the men have risen to the challenge with gusto.

Toronto laid out the wares of the men’s tour as all four of the top men—Rafael Nadal, Roger Federer, Andy Murray, and Djokovic—took up their rightful places in the semis. The same four were still around on quarterfinals day in sizzling Cincinnati, too.

We start with Mr Cool, the man with the runway walk, with fashion icons as friends, and with a certain penchant for a sharp look. 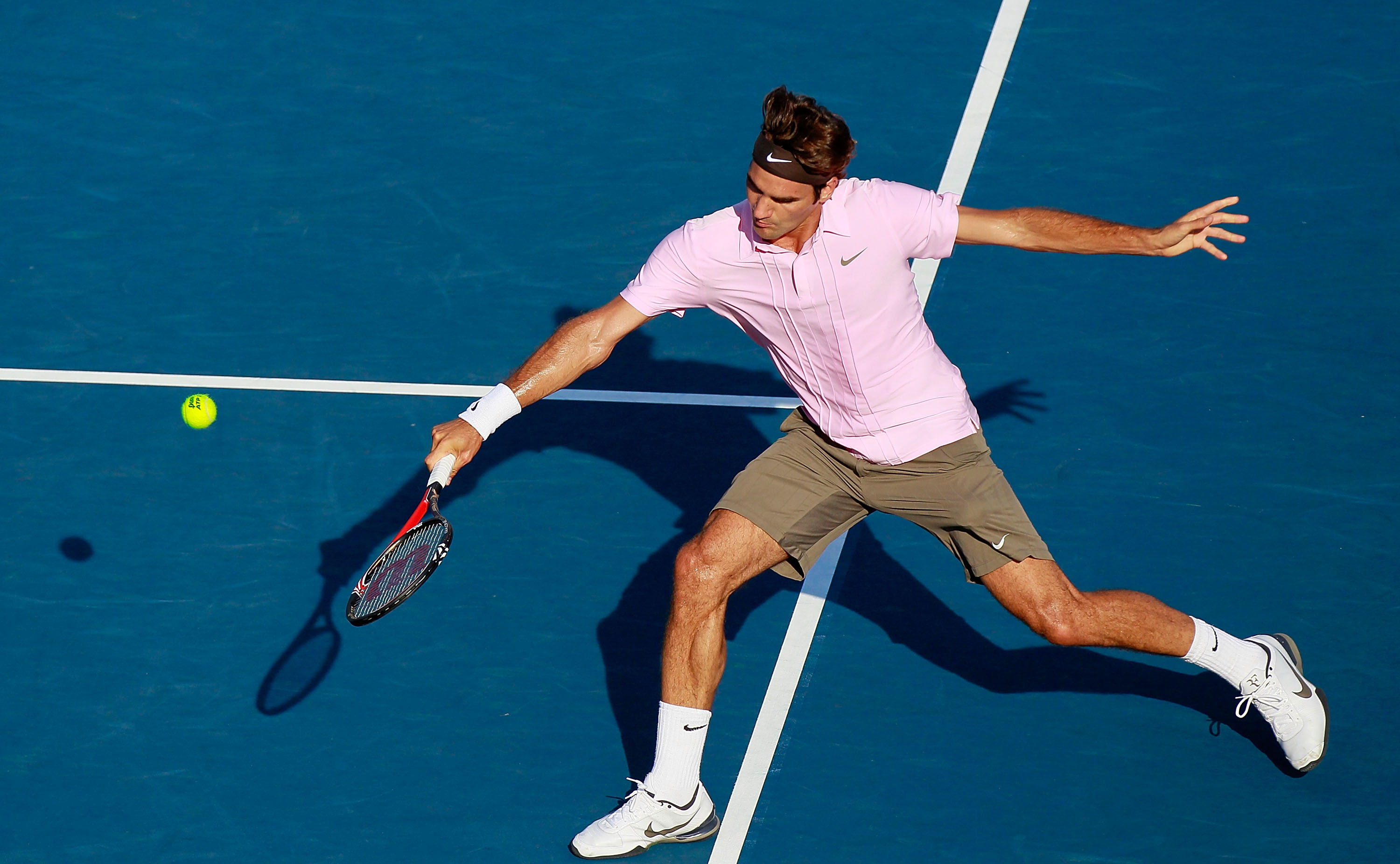 The ATP titled him the Pink Predator. Federer, after a six-week break, came back to Toronto in some style, and showed that real men really can wear pink—even the sugared-almond version.

At Wimbledon, it’s always head-to-toe white leavened with the odd touch of gold.

But pink: it’s very rare in the men’s tour, and has never graced the Federer back anywhere but on the practice courts.

Safe to say, he’s a man who’s confident in his skin, and the recurrent "pretty in pink" references bounced off that skin like water off a duck’s back.

Not surprisingly, after his extended break, Federer looked a little rusty in his opening match against Juan Ignacio Chela, but the second set was an altogether more fluid and confident affair, and Federer took the match in straights.

A bonus was the Andre Agassi record that came with it: 210 Masters match wins. Agassi’s record was 209, followed by Sampras on 190.

But coming up on the rails is the ever-present Nadal. Already on 185 wins, one feels it is only a matter of time until he takes this record too. 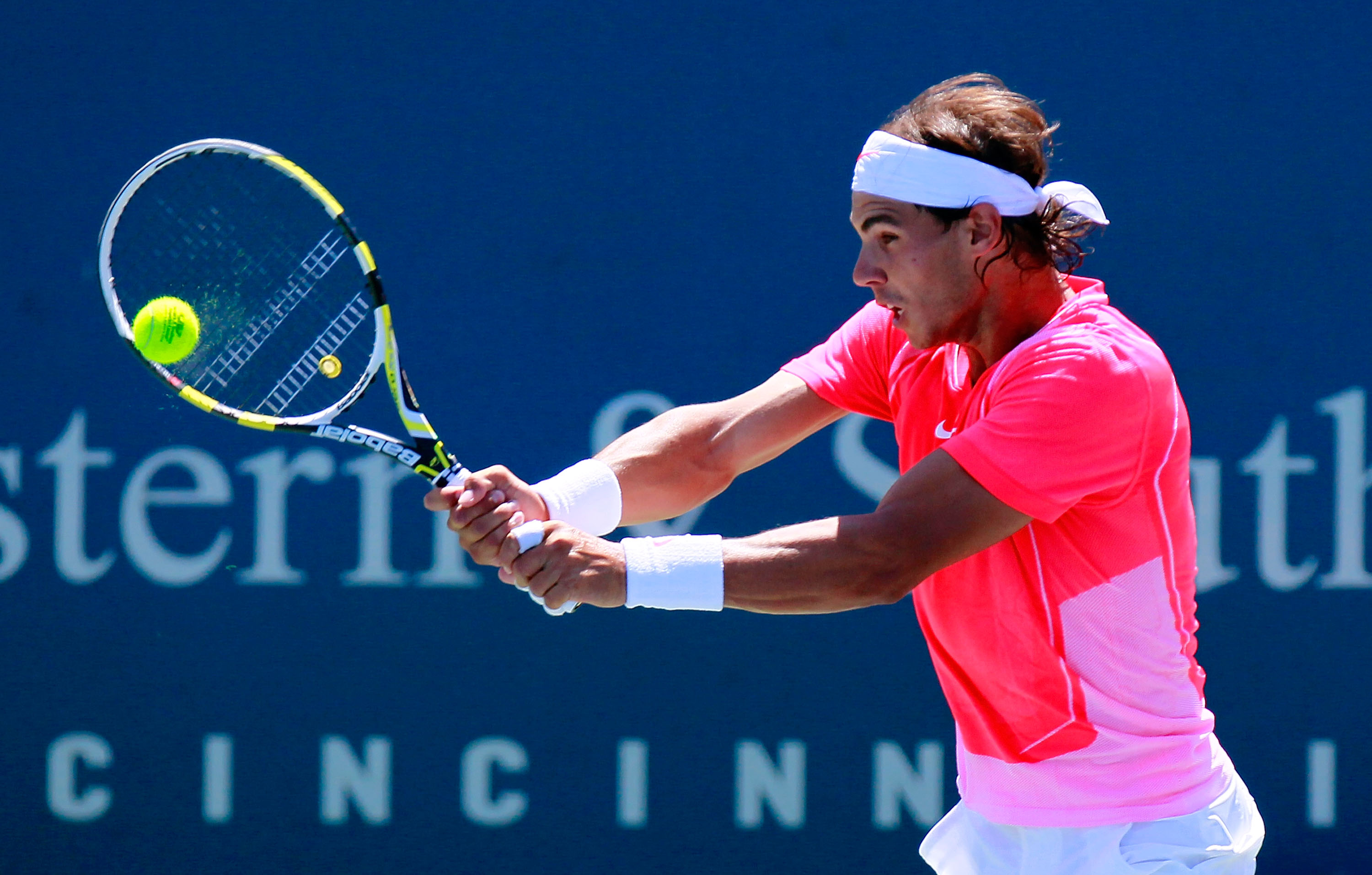 Nadal opened his campaign in Toronto with a distinct echo of Federer’s opener the night before.

Evidence of his own post-Wimbledon holiday showed in his hour-and-a-half opening set. He made 27 unforced errors on the way to his longest ever tie-break against a battling Stanislas Wawrinka.

Nadal needed 14 points to win that tie-break, but it gave him the momentum and confidence to take the second set 6-3. So far, so like Federer’s opener.

Sartorially, though, Nadal showed rather more bravado than Federer. Not content with wearing pink, he sported an eye-popping, hibiscus-red, skin-hugging number. Subtle it was not. Cut to intimidate it was.

Already with five titles this year, including two Slams, he doesn’t need any help from the shirt.

It was a surging Andy Murray who felled him in the Toronto semi-finals. The Scot knocked a few of his fans for six too… 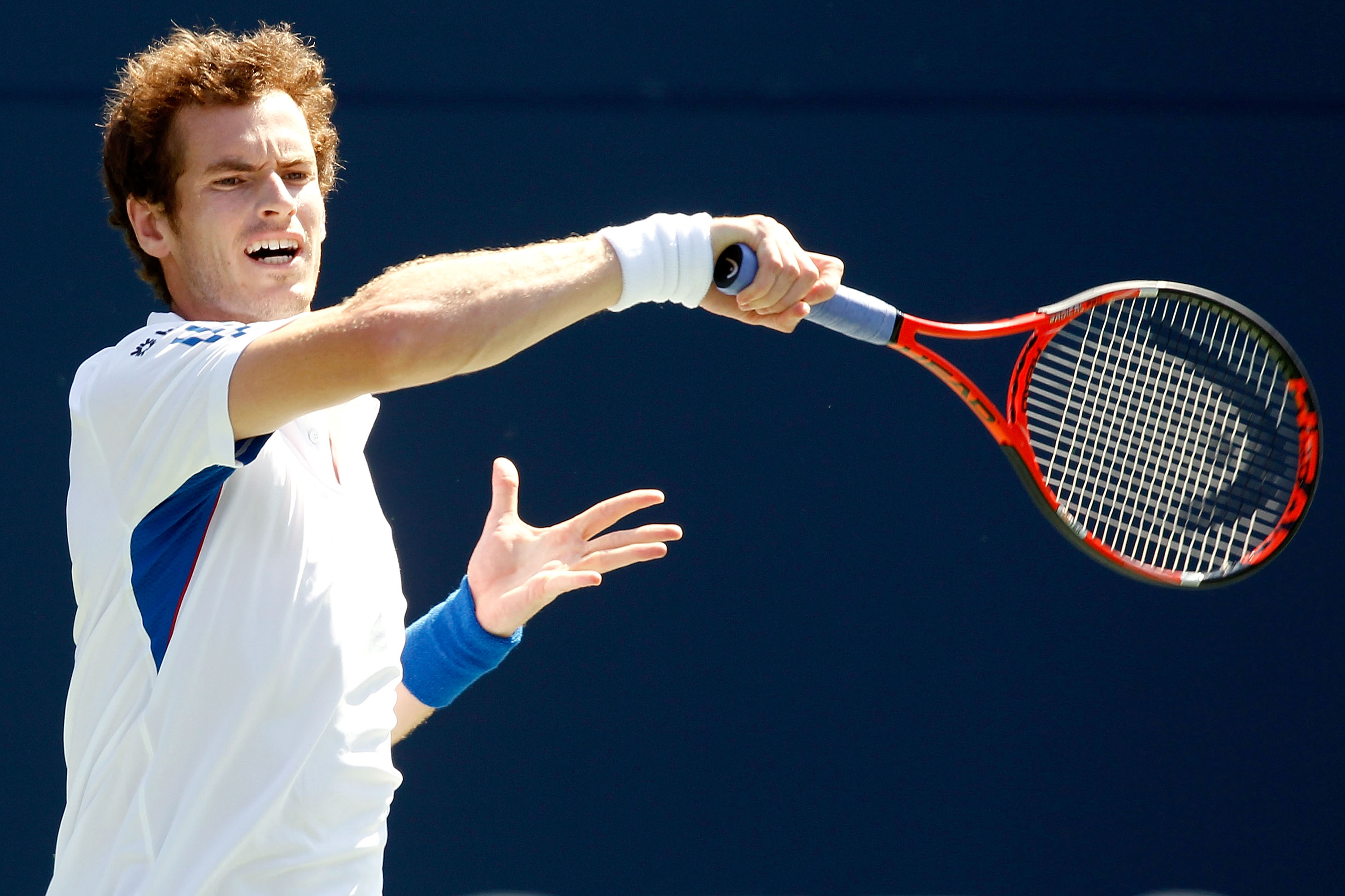 Murray stormed through the Toronto competition to take his first Masters title of the year and preserve his No. 4 ranking.

This man likes the hard courts, likes the U.S.A.—his training base is in Miami—and loves the U.S. Open above all the Slams.

Without the benefit of a coach, Murray started to play exactly the kind of game that could actually win him that New York title: uninhibited, attacking, aggressive, and focused.

It was a refreshing departure from the counter-punching Murray of old.

More surprisingly, that same confidence seemed to take hold of his extra-curricular activities too.

With perfect timing, there was Murray gracing a glossy feature in American Vogue. Usually dressed on court in baggy blue and white, his homeland colors, the dour Scot turned fashion plate, and was surprisingly sultry with it.

Captured by fashion photographer Mario Testino, the setting was the nuts-and-bolts environment of his concrete gym. Murray, though, groomed into rare refinement, casually sported a black tuxedo.

The chiseled, angular look was set off particularly well by the black wrapping of a weights vest.

By way of contrast, another set of photos retired to the open air, where white tee and jeans, topped by wind-blown Burberry, carried off a certain English irony.

It’s all a far cry from the rough and ready, gruff and slouchy Murray we’re used to. It’s almost, dare one say, an assured and mature man emerging from his shell. 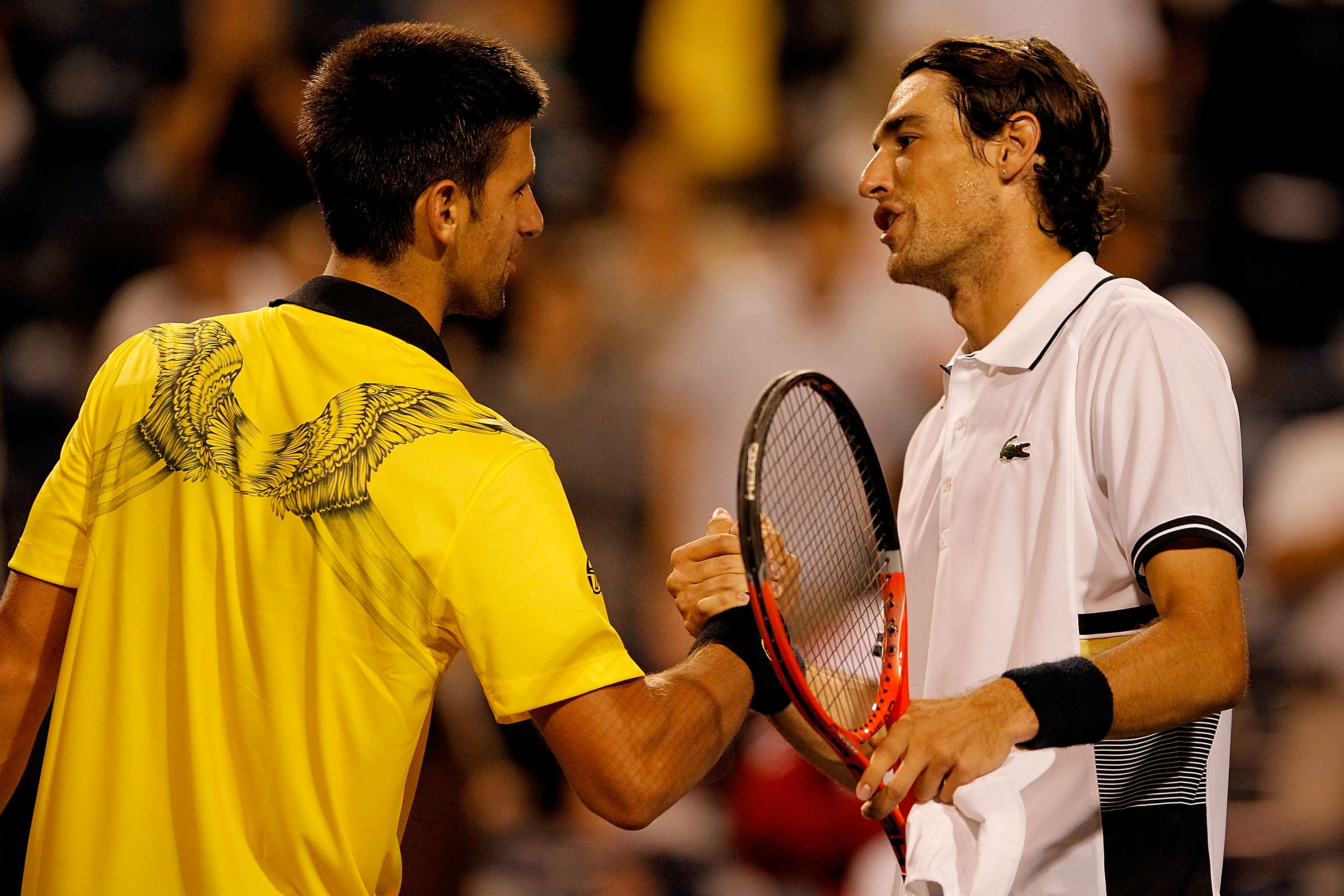 Here’s a man with no shortage of personal confidence. Djokovic has never been one to hide his light under a bushel. He’s fond of a fashion statement.

Take the shoes. Last summer, they were electric blue. By the World Tour Finals they were scarlet—with the bonus of some gold trim. There was also, of course, that Montreal show last year.

He’s a big personality, everyone’s friend, wears his heart on his sleeve. His inner trials are there for all to see: in Toronto it was a drooping head against Federer, and, in Cincinnati, it was drooping shoulders in the heat.

His shoulders, however, drew the eye for another reason. For his buttercup yellow shirt was decorated by eagle wings stretched across the width of his back.

If he’d worn a Serbian flag around his shoulders it could not have been a bigger statement.

The spread-eagled wings, a feature of numerous eastern European coats of arms, are an unusual adornment to a tennis shirt.

They are just as unusual on the front of a cap, but Djokovic had them there, too. His team, in solidarity, matched him in yellow shirts of their own.

Some will love it, some may prefer a little less of the tattoo-redolent imagery. But it’s all part of the extrovert, chest-beating, shirt-ripping Djokovic, and it’s probably here to stay. 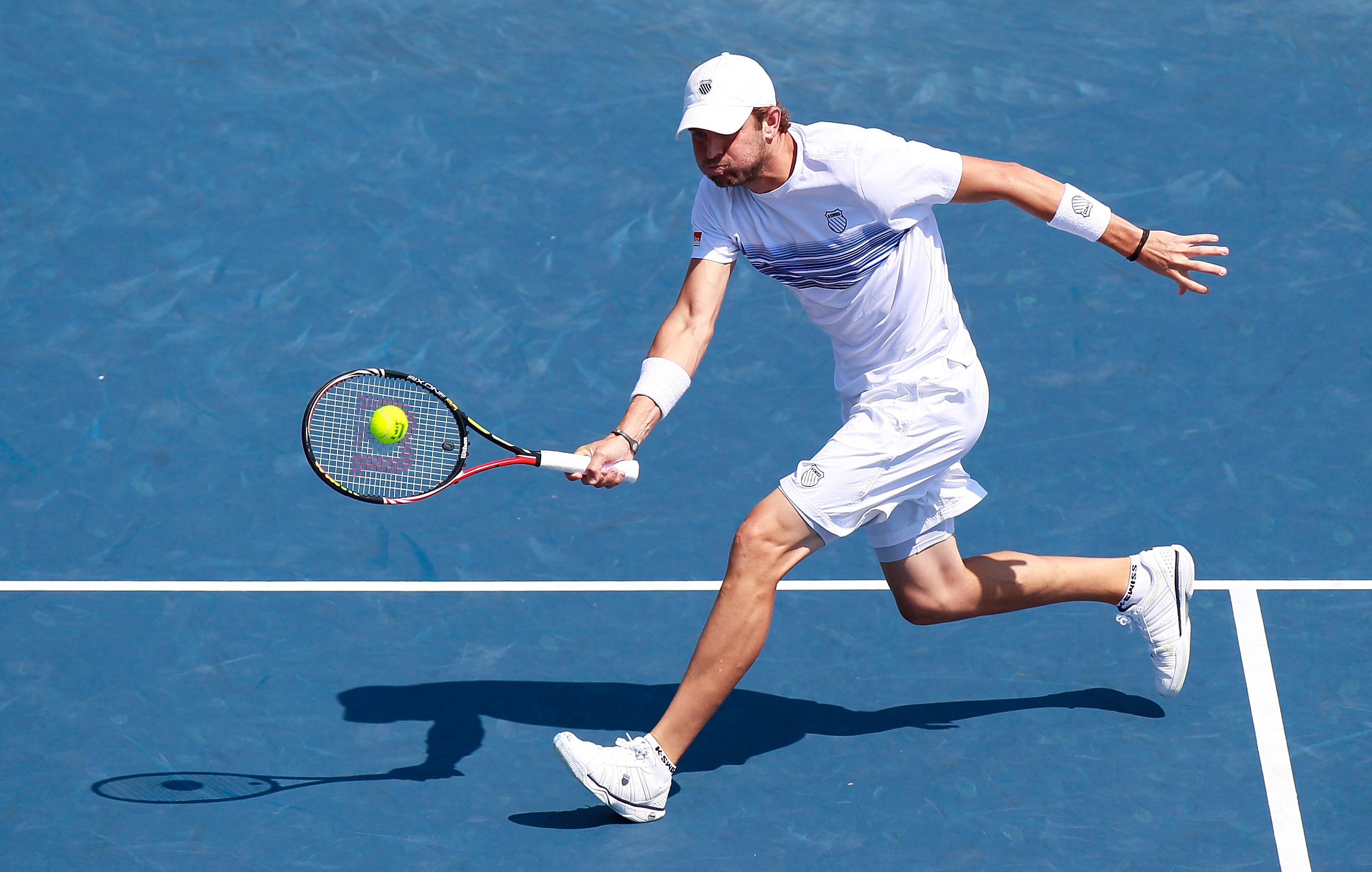 While a few men—Djokovic, David Nalbandian, Tomas Berdych, David Ferrer, and Gael Monfils—boasted sunshine colors from mid-morning, through the heat of the 90-degree afternoon, to the floodlit warmth of late evening, the majority have turned to white.

In the harsh, hot conditions of North American, it is an obvious choice. Andy Roddick, Marcos Baghdatis, Nikolay Davydenko, Robin Soderling: all tried to keep their cool.

Another one, Mardy Fish, has carried his hot form from the mid-summer grass onto the fast American courts.

He has cut a path through a Cincinnati draw that included Gilles Simon, Richard Gasquet, and Fernando Verdasco, a man who remains bowed beneath a cloud of ill form.

The American then took out Murray to set up a semi-final match with his white-clad friend Roddick.

The likable Fish, newly modeled, newly trim, and newly confident, has reached three finals since June, and won two of them. Head to toe in white, he’s the only man on the circuit to wear trainer-skimming socks that show off the slimmest of legs and ankles.

They’ve been a constant in the Fish garb, and an unexplained one. But while Murray melted in the high 90s, Fish looked fresh and sharp.

No-one’s about to question the flying Fish’s choice of look this season. 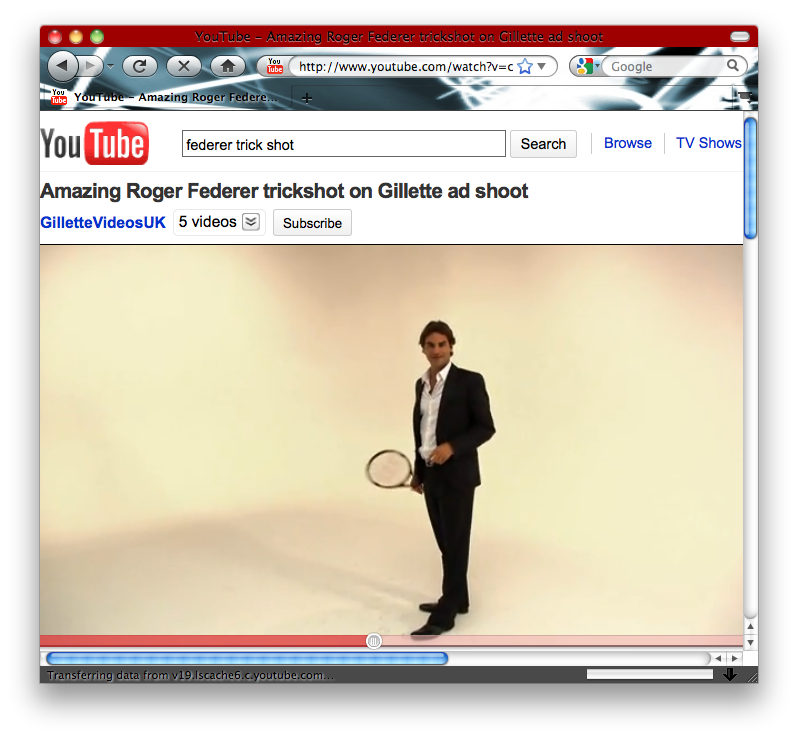 Nadal and Federer may have made their mark on court as "Men In Pink," but they’ve been having a lot of fun off court, too, and shown a little more of their natural personalities into the bargain.

Federer ‘went viral’ with a YouTube video shot on the set of his new Gillette ad. The debate rages about whether his trick shot, striking a bottle from the head of a victim with his serve, was genuine.

One thing was clear: Federer revels in the suave James Bond look. He stepped up to take serve in the crispest of white shirts, the sharpest of black suits, and the glossiest of black shoes, without a hair out of place.

Cue that Santana riff—“you're so smooth.” 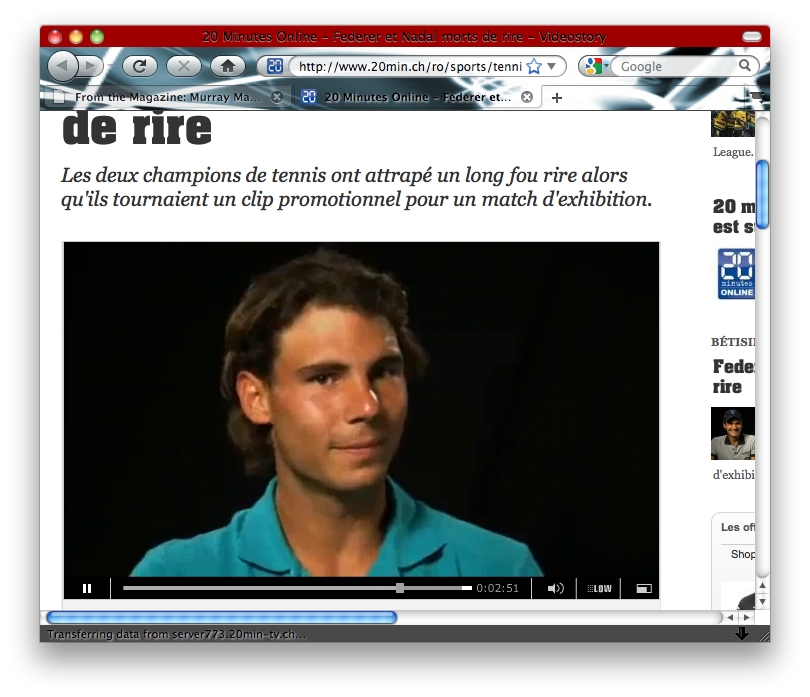 Fun of a very different kind is also likely to go viral soon, if the recording stays in one place long enough to get the hits.

Shot in Cincinnati, it’s the Roger and Rafa double act in full flow. The two are shown attempting to make a 20-second trailer for an exho match in Switzerland but, like mischievous siblings, they can’t stop giggling.

It’s casual—Nike tees, no stylists, off the cuff. They nudge each other, joke around, laugh helplessly. It’s about as far from smooth as Pepsi is from a triple-distilled malt.

The closing minute settles on Nadal, rosy cheeked—yes, back to pink.

His chestnut locks have been reduced to a shaggy crop, and Nadal uses the camera as a mirror, obsessively teasing and shaking his hair into place. The furrow on his brow suggests he is hugely worried about it.

A word in your ear, Rafa. Everything looks just fine.