The 15 Craziest Goals of All Time (with Video) 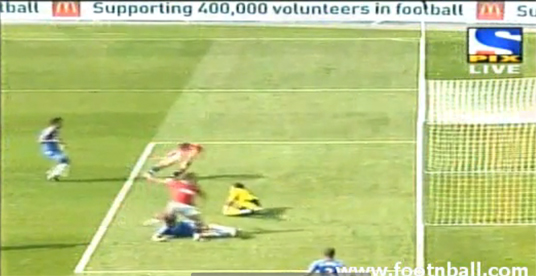 During the 2010 Community Shield, Manchester United's Chicharito managed to give us one of the most ridiculous looking goals when he was able to put the ball into the net off his own face.

This sent me on a mission to find some of the worlds most ridiculous looking goals and here is what I have found...

While playing for Odra Wodzisław in the Polish 2nd division, Adam Czerkas was lucky enough to accidentally score this goal from close to 40 yards out.

Darren Anderton managed to notch this one for England versus Sweden during the 1995 Umbro Cup in England.

Steven managed to give us this pun riddle goal when he put a little english on it.

This past Sunday during the 2010 Community Shield, Manchester United's Chicharito managed to give us one of the most ridiculous looking goals when he was able to put the ball into the net off his own face.

There have been a few goals that kinda look like this one, but none of those were scored by a 17 year old Ronaldo in a match where he scored five goals.

Bernd Hölzenbein is best known for receiving the foul during the 1974 World Cup Final versus Holland which allowed Germany to equalize from the penalty spot on their way to their second title.

He should also be remembered for this amazing goal where he goes from shameful slip to fantastic goal from the floor.

I tried my hardest not to include any own goals in this list but I couldn't pass this one up. Tomislav just stood there and let the ball hit him in the head, I gotta exclude this from the own goal pile for lack of effort to clear the ball.

Tomas Broin proved back in 1995 that Leeds fans at least have something to be happy about with this goal.

During the first leg of the 2007 Campeonato Mineiro (Minas Gerais State League) Vanderlei of Atletico-MG scored this surprise goal on Cruzeiro while the keeper was still walking back to his net after a previous goal against him. Keep in mind these two teams are each others biggest rivals.

After a goal from the penalty spot by Leverkusen goalie Hans-Jorg Butt, Mike Hanke of Schalke 04 took a quick shot from the center circle after the restart, surprising both the goalie and the Bayern backline by lobbing one in over their heads.

An Iceland defender forgets the rules of the game and decides to roll the ball over to his opponent in his own box during the match for no reason at all. Perhaps that is why Iceland managed to lose 5-0.

This one just reminded me of those old McDonalds commercials, off the wall off the scoreboard and nothing but net.

I can't even begin to describe how badly this guy dishonored his family.

Sone Aluko is perhaps the only player to ever score a goal without even trying to do so. I mean, if he had even been facing the keeper he may have either tried to get out of the way of the throw or tried to control it in some manner.

How can someone beat Sone Aluko's goal you ask? Easy, he just has to be a ball boy and not a professional soccer player.

This actually happened during a match in 2006 in a Sao Paulo state league (non first division but not second division either) match where the referee, Silvia Regina de Oliveira, allowed this goal to stand and the result of the match was never changed.

The easiest part of this to understand is that Silvia Regina de Oliveira is actually a FIFA sponsored referee who even managed to be in charge of the 2003 Sao Paulo first division final between Corinthians and Sao Paulo FC.

FYI Gandula is the Portuguese word for ballboy.