With all of the talk recently about conference realignment, I thought I'd put in my two cents worth on how I'd like Notre Dame to handle this if the Big East gets raided by the Big Ten during this process. 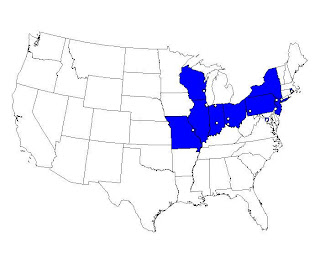 Here's how I'm seeing this shake out.

First, all of the football members of the Big East will be gone to join other conferences, which takes out Cincinnati, UConn, Louisville, Pittsburgh, Rutgers, South Florida, Syracuse, and West Virginia.

Of course, we'll want to add a few schools to the conference—at least four, and possibly as many as eight. And the Atlantic 10 Conference would be a great conference to raid to fill out the new Big East.

In attempting to fill out the conference, there are lots of candidates, but I've come up with a 16 team conference that would fit well together not only athletically, but also in philosophy and academics.

I really like this conference, for a lot of reasons.

There is certainly a heavy Catholic influence here, as there are 14 Catholic Universities, and only two private secular Universities. There would be no public universities involved at all. This conference could easily become an all Catholic conference by adding Loyola Maryland and Creighton, and taking out Butler and George Washington.

Also, there are some other colleges that would fit well that would add more secular schools, such as Temple and George Mason.

From an athletics standpoint, this would certainly be a competitive conference.

We all saw what Butler did this year, nearly winning the title.

George Washington has made the Sweet Sixteen and, St. Louis and Duquesne are probably historically the weakest basketball teams in the conference, but they do bring other things to the table.

Academically, this conference would be a superstar.

Using U.S. News and World Report rankings as a standard, Notre Dame and Georgetown are in the top 25 academically among national universities.

George Washington, Marquette and St. Louis are in the top 100, and Loyola and Duquesne are 119 and 128 respectively.

Four other schools make Tier Three in the rankings. (Say what you will about USN&WR rankings—they are the most widely distributed and comprehensive academic rankings available, so I'm going with them.)

Even the schools that don't appear in the U.S. News National University Rankings are still quality academic institutions.

Providence College has been ranked by US News and World Report as one of the top two regional colleges in the Northeastern United States for the past nine consecutive years.

Dayton graduated 96 percent of it's student-athletes in 2008, the most of any Atlantic 10 Conference school, and tied for 10th in the nation in such achievement. They are also ranked as one of the top ten Catholic Universities in the country.

Butler is No. 2 in the Midwest Master's Universities rankings (just behind Creighton, another school I considered.) Xavier is third.

St. Joseph's is eight among Best Universities-Master’s (North,) and has a top 25 business school.

There are three ranked schools among graduate business programs, and 10 of the top 100 law schools in the country.

Villanova was once part of the Atlantic 10 before joining the Big East, and there are lots of historical and geographical connections between the schools.

This would allow Notre Dame to continue its independence in football, mush as it does now with its relationship with the current Big East.

As for the football schools currently in the Big East, I'm sure they'll land on their feet.

All this talk could be nothing, but if the dominoes start to topple, here's the biggest shakeup I could see happening:

It's also possible that the Big Ten will add only one team, which means there may be a much smaller trickle down effect.

Perhaps East Carolina or Central Florida will join the Big East if it's Pittsburgh to jump.

I could see more shifting if Missouri is the one to jump—The Big XII would try to get Arkansas, then the SEC might try to poach West Virginia, again leaving East Carolina or Central Florida to join the Big East.

Or, the Big XII could add Utah instead, with the MWC grabbing Boise State to replace them.

All in all, there are a lot of interesting possibilities for conference realignment as this whole thing shakes down.

What are your thoughts?

Notre Dame Football: Ian Book to wear No. 16 with the New Orleans Saints

Notre Dame Football: Ian Book to wear No. 16 with the New Orleans Saints

The Wide Receivers Room: What to Expect

The Wide Receivers Room: What to Expect