Charlie Weis is not going gently into the good night.

There's graceful exits and there are angry exits that resemble movie villains falling from great heights and trying desperately to take anyone nearby with them.

Charlie is lashing, thrashing, and trashing anyone he can cover he catch in the crossfire as his South Bend ship sinks.

Charlie is even mowing down relative innocents far from South Bend.

Look at what he told Irish Illustrated about rival Pete Carroll.

"He's doing it in Malibu and it's not national news. What's the difference? I don't understand. Why is it OK for one guy to do things like that, but for me, I'm scrutinized when I swear. I'm sorry for swearing; absolve my sins."

Charlie said it was all a joke, just a commentary on how wicked web rumors can be.

Pete Carroll must think "Wow what a funny man that Charlie Weis is. He really cracks my wife up." I mean that's a great crack to drop on the national media about a married man, isn't it?

What guy wouldn't think that was funny? So funny that even California cool Pete might want to punch Charlie in his manatee sized mouth next time he see's him.

Poor Pete might be getting his hair ruined by the Tiger Wood's nine iron wife treatment in his driveway because Weis wanted to crack wise.

Charlie publicly spouting about an affair, even if Carroll is cuddled up with coeds, violates not only unwritten coaching codes of conduct but also ancient tribal man rules, Caribbean pirate codes, the code of the Old West, Omerta and the medieval knights Round table rules.

And it angers the ancient football Gods also.

Its an outburst that used to be settled with a duel.

Say what you will about dueling but the prospect of a duel vastly improved politeness in society.

Pete, as the aggrieved party, ought to put away the pistols and select a nice razor sharp rapier and have at the big boy ala Captain Blood.

And what about Charlie suddenly inserting himself into the Chicago Bears job?

Isn't it a bit unseemly to campaign for another man's job before the Stanford Cardinal cleat marks have even faded from your face?

What makes the man who lost two out of three to the Naval Academy think he is such hot stuff on the coaching market anyway?

Charlie says the Bears are convenient because he would not have to uproot his family so he effectively launched a preemptive strike on Ron Turner.

And if he got the Bear job how long would it be before the dirk was inserted in his head coach's back?

Someone tell Lovie Smith that large man isn't lingering around behind him because he likes him.

And one also wonders if Charlie channelling players out of South Bend?

Notre Dame players Jimmy Clausen and Golden Tate likely were leaving South Bend anyway but they said they were encouraged by their coach to desert the Golden Dome.

One wonders if Charlie was staying in South Bend if the same words would have used by Weis? Or would he beg the players to come back?

Clausen though might have legitimately feared being brutalized like Sam Bradford while his stock dropped as he struggled to learn a new look offense.

But if Machine Gun Kelly rolls in from Cincinnati it will bombs away and a bonanza for a strong armed quarterback.

In the end Charlie should not be so angry or spiteful.

Notre Dame gifted him with a wonderful double dip contract clause. That is Weis wanted it written that if he was fired by the Irish he could still collect his contract while working another coaching job.

It's a rare clause as most fired coaches lose their former contracts when they take another coaching job.

Notre Dame dropped the ball, again, with that easy contract deal and Charlie's ugly out. Maybe the man who made the contract ought to follow Charlie into the can.

Still Charlie doesn't have to slash and burn his way out of the Bend. He could just grab his big bailout cut of cash and say thanks for the memories.

I mean when one sprays stink the smell stays on the slinger too.

And does any team want that smell on staff? 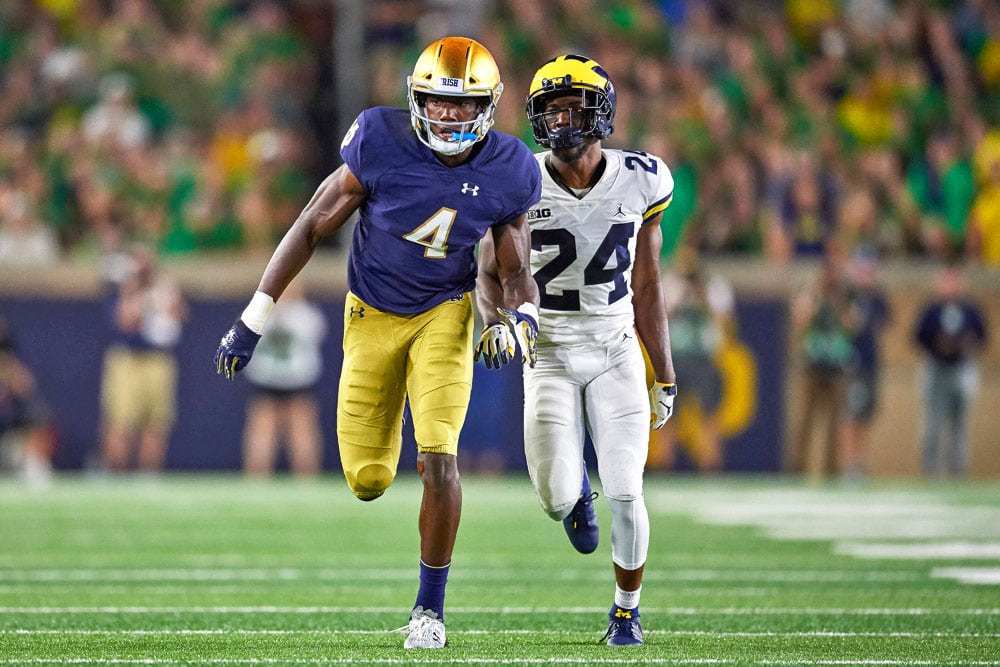 We highlight our favorite offensive players in the 2020 cycle