The player who the Phoenix Suns traded for cash considerations last offseason faced a tall task entering the day.

Warren, the team's leading scorer, apparently didn't get the memo, though, as he scored 19 first-quarter points to propel the Pacers to a 35-29 lead after one.

Late in the second quarter, the former North Carolina State star hit a pair of three-pointers and a two-pointer during a three-possession stretch. He finished the first half with 29 points.

Warren cooled off in the third with just five points, and the 76ers took a 95-86 lead early in the fourth.

But Warren had other ideas, dropping 19 points in the final 8:03. He had another stretch in which he scored on three straight possessions, hitting a pair of two-pointers and a three early in the fourth.

Then Warren provided his best work late in the quarter, helping Indiana take a lead and maintain it with timely buckets. 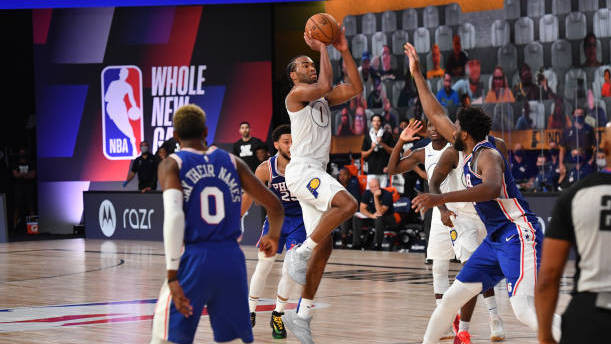 The 76ers stormed back, though, with another Embiid bucket and Tobias Harris three bringing Philadelphia within three.

The Pacers got the ball with 30 seconds left, meaning a 76ers stop would give them a chance to tie the game.

Philadelphia never got that opportunity, as the scorching-hot Warren put the game on ice with another three.

T.J. Warren on his 53-point night: "Just doing what I do best — just putting the ball in the hole. I just wanted to lead the team offensively." @Pacers https://t.co/tyjfCMUwPf

Warren wasn't the only player to put up a ridiculous stat line, with Embiid dropping 41 points, 21 rebounds, four assists and three blocks.

Somehow, Warren dropped 53 despite shooting just four free throws. With that effort, he joined a very short list of players who attempted five or fewer free throws and scored 50 or more in a single game, per StatMuse:

Warren and the Pacers will face the Washington Wizards on Monday at 4 p.m. ET.

He could have another opportunity for another masterful performance, as the Wizards are 29th in the NBA in defensive efficiency, per ESPN.com.