Indiana Pacers guard Malcolm Brogdon is out for Saturday's game against the Philadelphia 76ers with a cervical strain, according to ESPN's Eric Woodyard. However, star shooting guard Victor Oladipo will play despite his continued recovery from a quad injury, per Shams Charania of The Athletic and Stadium.

Woodyard noted Brogdon suffered the injury during Indiana's scrimmage against the San Antonio Spurs this week.

Saturday's game is the first for both the Pacers and the Sixers since the restart of the 2019-20 season inside the NBA bubble in Orlando, Florida, this week.

Oladipo missed a full calendar year between the 2018-19 and 2019-20 seasons with a ruptured quad. He returned to appear in 13 games this season before it was suspended because of the coronavirus pandemic, averaging 13.8 points, 3.2 rebounds and 3.0 assists.

The Pacers were limiting his minutes and he played just 25.9 minutes per game, which is why his numbers were down significantly from his All-Star seasons in 2017-18 and 2018-19.

Oladipo initially opted out of the restart to focus on getting back to full health but decided to test himself in the Pacers' scrimmages and then decided he was healthy enough to play.

The 27-year-old Brogdon, who was named the 2016-17 NBA Rookie of the Year while with the Milwaukee Bucks, was enjoying a career year before the 2019-20 season was suspended in March because of the coronavirus pandemic. 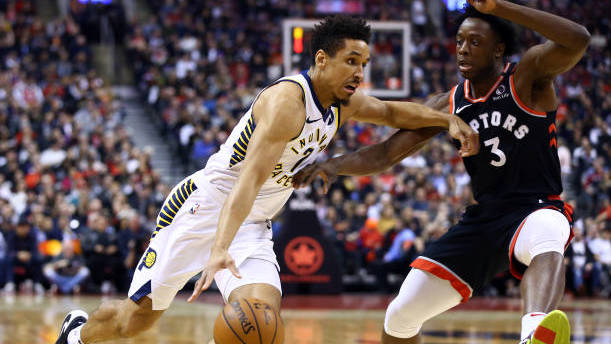 In 48 games, Brogdon was averaging 16.3 points, 7.1 assists and 4.7 rebounds per contest, all of which are career highs.

Aaron Holiday will start in place of Brogdon at point guard. Holiday is averaging 9.4 points, 3.3 assists and 2.3 rebounds per game this season in 58 appearances, including 26 starts.

While Holiday is a solid fill-in and Oladipo gives the Pacers an explosive offensive threat in the backcourt, being without Brogdon is a tough break given all the other injuries Indiana is dealing with as well.

All-Star Domantas Sabonis is dealing with a foot injury that will keep him out Saturday, and guard Jeremy Lamb is out with a knee injury as well.

Assuming Oladipo is on a minutes restriction, there will be added pressure on forward T.J. Warren and center Myles Turner to carry the load offensively against Philadelphia.

Saturday's game is significant for both teams since they are currently tied for fifth in the Eastern Conference at 39-26.