Golden State Warriors president of basketball operations Bob Myers said Friday that the criticism of Kevin Durant for leaving the organization to join the Brooklyn Nets in free agency last offseason was undeserved.

Myers discussed the backlash Durant received during an appearance on ESPN's The Woj Pod with Adrian Wojnarowski (via Brian Witt of NBC Sports Bay Area):

"Look, the guy came to our team, was MVP of the Finals twice, two championships, three Finals, what do you want? I mean, what do you want to happen? What do you expect out of a human being? What is the problem with that? But, people would find it and seek it. ...

"A lot of people that comment on him would say he shouldn't have left or he shouldn't have done this—everybody's telling him how to live his life. The way I think about Kevin is...just because you don't understand doesn't mean he's confused."

The negative reaction this time around Durant was relatively tame compared to three years earlier when he opted to end a nine-year run with the Oklahoma City Thunder to join the already star-studded Warriors, who were coming off a record-setting 73-9 season.

Golden State was dominant for nearly his entire stay. The Dubs lost a single game during the 2017 playoffs en route to the franchise's second championship in three years, and they defended the title in 2018. 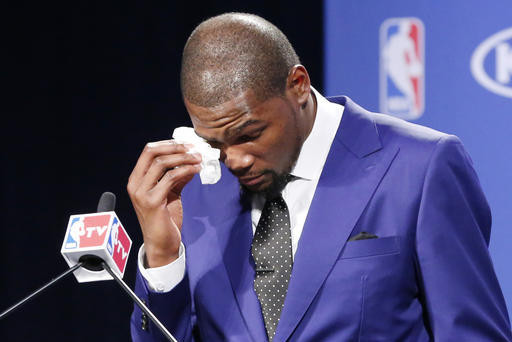 The Warriors reached the Finals again last season before coming up short against Kawhi Leonard and the Toronto Raptors, and Durant then decided to leave in July.

"Players are allowed to do whatever they want to do, whether it's him or anybody else," Myers told Wojnarowski. "In professional sports, you sign contracts, and when you're free you get to do what you want to do. You can't criticize a guy for that."

Durant has yet to make his first appearance for the Nets while completing his recovery from a ruptured Achilles suffered during the 2019 Finals.

Starting next season, the 10-time All-Star and six-time First-Team All-NBA selection will team up with Kyrie Irving to transform the Nets into a championship contender.

Myers said on The Woj Pod he's focused on getting the Warriors back to that title level following an injury-riddled 15-50 season and maintains no ill will toward Durant for his decision to depart, per Witt.

"Everybody is so fast to look at what's wrong with a team, and I was just so focused on—and still am—on what was right with all those things, even in losing," he said. "Even in the effort you make to win or lose, there are great experiences there. And so for me—and it may have come from I liked the guy, for all of him."

Golden State wasn't one of the 22 teams to qualify for the resumption of the 2019-20 NBA season amid the coronavirus pandemic at the Disney World complex in Orlando, Florida.

The Nets restarted play Friday with a 128-118 loss to the Orlando Magic with Durant, Irving and Spencer Dinwiddie all out of the lineup.