The cries for Ben Simmons to shoot more were answered affirmatively on Friday when the two-time All-Star made one of his two three-point attempts during the Philadelphia 76ers' scrimmage against the Memphis Grizzlies.

After the Sixers' 90-83 victory, head coach Brett Brown told reporters Simmons "didn't flinch" on either of his attempts.

Simmons told reporters he's "comfortable" shooting from the corner, which is where both of his three-point tries came from.

The 76ers have received a lot of attention at the NBA campus near Orlando, Florida. Brown has been using Simmons exclusively at power forward during practices, with Shake Milton handling point guard duties.

Simmons has also been willing to shoot from behind the arc during practices, which Brown said earlier this week was only part of the "paradigm shift" he's seen from the 24-year-old's mindset to take those attempts he has passed up during his career:

"That has been an attitudinal change, an internal decision, because I've seen a player that's cocky and playing and when the game says shoot because nobody's on you, he doesn't blink and his teammates love it. As far as going deeper than that like numbering it up and sitting him if he doesn't shoot, I'm not doing that. I'm proud of how he personally has handled what I think is going to be a paradigm shift and we're going to see ultimately transform as we start playing basketball games."

Simmons only attempted six three-pointers in 54 games before the season was suspended in March. He did make two of them, his first successful tries from long distance in his NBA career.

With the Sixers getting Simmons back at full strength for the restart after he missed their last eight games from Feb. 24-March 11 due to a nerve impingement in his back, they figured to be a dangerous team in the Eastern Conference. 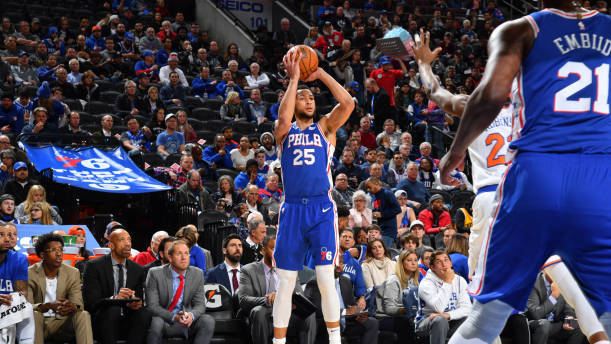 If Simmons has added a new shooting element to his game leading up to the restart, the 76ers have the potential to reach the NBA Finals.

Simmons will be able to show off his shooting form during games that count when Philadelphia resumes the season on Aug. 1 against the Indiana Pacers.