For the Los Angeles Lakers, getting ready to resume regular season play on July 30 in the NBA's "bubble" at ESPN's Wide World of Sports Complex at the Disney campus in Orlando, Florida, was already fraught with its own challenges.

Starting guard Avery Bradley elected not to join the team after citing family reasons, and then, Rajon Rondo fractured his right thumb during practice on Sunday.

To those keeping score, that's two important members of the Lakers backcourt missing at a time when the team needs them most.

In Rondo's case, it delays the appearance of what teammates and fans have come to know as "Playoff Rondo."

Last season was the 14-year veteran point guard's first with L.A., and since they didn't make the postseason, the sense of anticipation for his seemingly raised level of play has grown.

"The best players on the team are usually the ones who play best during the playoffs," Bradley told Bill Oram of The Athletic. "And that's what he is. He's a true competitor. So when the game is on the line, Rondo is one of the guys that performs."

Rondo's reputation as a playoff performer is likely one of the reasons why head coach Frank Vogel is holding on to the hope that he can rejoin the team in time for it's late push to win a championship.

"Losing Rajon is a huge loss for our team," Vogel told Broderick Turner of the Los Angeles Times. "But we expect Rajon to be a part of our playoff run. Looking at six to eight weeks puts us somewhere around the first, second round of playoffs.

"We're very confident that he'll be able to get back and be a major factor for us in our playoff run. So having the seeding games, the way they've set up this sort of schedule benefits us in this situation for sure."

Over the course of 48 games, he's averaging 7.1 points, three rebounds and five assists.

But those numbers don't tell the whole story.

Rondo is backup lead guard for the Lakers and has a steadying influence on the second unit whenever he's on the floor. He's a leader and a catalyst and has one of the highest basketball IQ's in the league.

In fact, many refer to him as a savant in that regard, so it won't be an easy task to fill the void left by his absence.

Vogel is hopeful that newly added players Dion Waiters and JR Smith will be the next men up.

"We've got two really good basketball players that we added late in our season that do different things," Vogel told Oram. "But equally as important is JR being able to shoot from the perimeter, being a big-time catch-and-shoot player, and Dion's ability to make plays off the bounce.

"Losing Rondo put more of the meat on Dion's skill set, so I look forward to seeing what he can do more as we get into games. But all of those guys will pick up slack."

Neither Waiters nor Smith are known as facilitators, so it will be tough for them to mimic what Rondo does for the team.

But both players, despite their collective inaction leading up to this point (Waiters hasn't played since January and Smith hasn't suited up since late 2018), can score in bunches and should be able to establish their roles in the seeding games leading up to the playoffs.

As for Bradley's absence, Vogel hasn't officially made a decision on who will replace him in the starting lineup, but he's leaning towards Kentavious Caldwell-Pope.

"We'll always have an open competition, especially when we have practices and two weeks leading up to our first scrimmage and another 17 days before our first (seeding) game," Vogel told Daniel Starkand of LakersNation.

"But, Kentavious Caldwell-Pope did a phenomenal job when Avery was injured earlier in the season. That's really where I'm at, in terms of what the starting lineup is going to look like with him being in that slot. Obviously, we'll still see how things go throughout practice, and other guys will have opportunities."

KCP has already started 20 games for L.A. this season, so it's not surprising that Vogel has confidence in him.

More importantly, though, he's connecting on a career-high 39.4 percent of his shots from behind the three-point line. That will undoubtedly open up the floor for Anthony Davis and LeBron James in the first unit.

Bradley is an elite defender, so with him out, KCP will have to step up his defensive intensity. He's got a solid reputation on that side of the ball, but he's regressed since coming over from Detroit.

Vogel with likely be looking for Alex Caruso to also serve as a spark plug on the offensive and defensive end and try to defend the perimeter by committee.

Caruso has a defensive rating of 100.3 and plays really well alongside James.

"Just playing the game the right way," James told Mike Trudell of Lakers.com when asked what works so well when they share the court. "Very cerebral basketball players. We're making winning plays, both of us. We work well together, and every minute we're on the floor, we're just trying to make it productive, trying to be in the plus and not the minus. It's a great combination for our ball club."

If Caruso and James can reclaim that chemistry, and KCP, Waiters and Smith can step up big, the Lakers should be in good position to challenge for the title when the dust settles in the Western Conference. 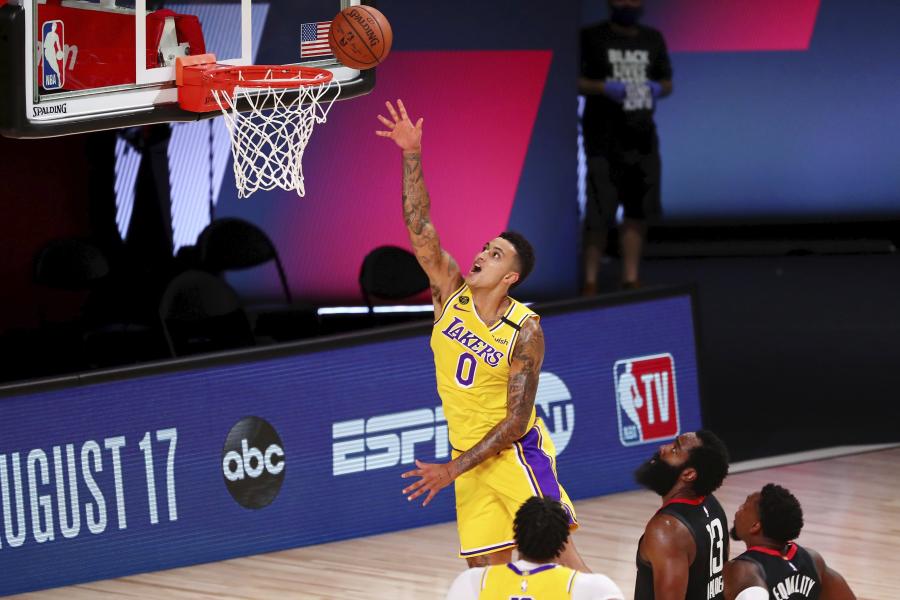