The Kansas City Chiefs have re-signed backup quarterback Matt Moore on a one-year contract, per Terez Paylor of Yahoo Sports.

Moore was called into duty against the Denver Broncos last year when 2018 NFL MVP signal-caller Patrick Mahomes suffered a dislocated patella in Week 7.

The 35-year-old finished off a 30-6 win over Denver before the Chiefs split a pair of games against the Green Bay Packers (31-24 loss) and Minnesota Vikings (26-23 win) prior to Mahomes' return.

During that three-game stretch, Moore went 59-of-90 (65.6 percent completion rate) with four touchdowns and no interceptions. He threw for 8.21 adjusted passing yards per attempt, according to Pro Football Reference.

Moore, who played college ball at Oregon State, has spent the majority of his career as a backup with the Carolina Panthers and Miami Dolphins. He was Miami's primary starter in 2011, going 6-6 with 16 touchdowns and nine interceptions.

Moore has proven to be a valuable insurance policy for Kansas City. When necessary, he has a big role to fill with Mahomes currently serving as the game's best quarterback and arguably its most valuable player, but Moore got the job done in his absence last year.

The Chiefs have other reinforcements at quarterback. Chad Henne, who held the backup job before suffering an ankle injury in Week 3 of the 2019 preseason. That prompted the Chiefs to sign Moore, who grabbed the No. 2 and held onto it for the remainder of the season. 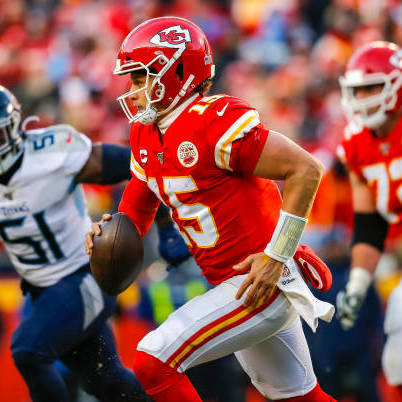 Kansas City also added XFL standout Jordan Ta'amu, who shined with the St. Louis BattleHawks before the league shut down because of the COVID-19 pandemic. In five games, Ta'amu completed 72.0 percent of his passes for five touchdowns and two picks. He's a dual-threat, however, and rushed for 217 yards and a score on 41 carries as well.

Ta'amu played his college football at Ole Miss, where he finished second in the SEC in passing yards during his senior year in 2019.

The Chiefs will look to begin defending their Super Bowl crown when they host the Houston Texans on Thursday, Sept. 10.