In an open letter to Georgia Sen. Kelly Loeffler published Friday on Medium, Atlanta Dream guard Renee Montgomery offered to engage the Republican incumbent and Dream co-owner in a conversation on racial justice following the senator's remarks in opposition to the Black Lives Matter movement.

"I kindly invite you to rethink your stance and join a discussion with me," Montgomery wrote, referencing Loeffler's re-election campaign.  "While you might very well be on the 'right' side of this November's elections, you are on the wrong side of history if you can't see that Black Lives Matter."

Loeffler recently wrote WNBA commissioner Cathy Engelbert to express disagreement with the league's decision to include the phrases "Black Lives Matter" and "Say Her Name" on warm-up apparel, instead arguing the league should more prominently display the American flag.

Multiple current and former WNBA players have called for the league to remove Loeffler from the Dream's ownership team, pointing to instances where the senator's statements have opposed the values of inclusion and equality the WNBA embraces.

In response, the WNBA attempted to distance itself from Loeffler, noting she has not represented the Dream in the league's board of governors since Oct. 2019 and is no longer involved in the day-to-day operations of the team.

The following was released by the WNBA: https://t.co/wH6ZmyDDcx

Montgomery's letter comes after the 10-year veteran announced her intent to sit out the upcoming season to continue working towards social justice reform.

"Your comments hurt deeply because it was a veiled 'All Lives Matter' response. It's not that you're tone deaf to the cry for justice, but you seemingly oppose it. And you are speaking from a position of immense influence as a team co-owner in our league and as a US Senator.

"When Black Lives Matter started, the founders never thought that they would have to add the word 'too' at the end of it: Black Lives Matter Too. We just assumed that people would understand that we matter also. Is that too big of an ask?

"... I know you have a tough upcoming election in November and must appeal to your base. I get it, I do. But to say sports shouldn't mingle with politics denies our past."

Loeffler has yet to publicly respond to Montgomery's offer. 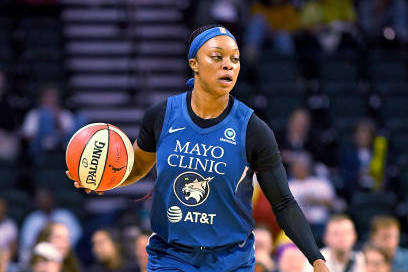