After coming off the bench his last game before the All-Star break, Philadelphia 76ers center Al Horford told reporters Wednesday he expects to remain in that role going forward, per Kyle Neubeck of the Philly Voice.

The veteran had started every regular-season game he had played over the past 11 years since his rookie season, but he came off the bench in the 76ers' 110-103 win over the Los Angeles Clippers last week. He finished with nine points and six rebounds, bringing his season averages to 12.0 points, 6.7 rebounds and 3.9 assists per game.

Though it's never ideal to have a bench player who just signed a four-year, $109 million deal in the offseason, his fit within the rotation has been a significant issue for Philadelphia.

Horford, Joel Embiid and Tobias Harris are at their best playing either the 4 or the 5. And with a point guard who doesn't shoot from the outside in Ben Simmons, Philadelphia's starting lineup has spacing problems.

Horford and Embiid have especially struggled to play off each other, with the team being outscored by 14 points in the 481.4 minutes they've played together this year, per Basketball Reference.

"I think at times, we've struggled with the spacing on the floor and it's just not about us," Embiid said last month, per Ky Carlin of Sixers Wire. "I think he's been great, I think he's been doing a great job. I think it's mostly about the team. We're still trying to figure out when to put everybody on the floor, but we're going to be fine." 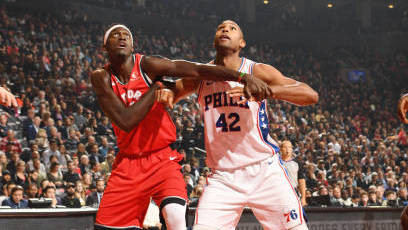 Moving Horford to the bench allows each player to spend more time by themselves at center, allowing them to excel on both ends of the court.

Harris discussed the move from small forward to power forward:

The #Sixers’ Tobias Harris on the prospect of starting at power forward after primarily starting at the 3-spot during the first two-thirds of the #NBA season: https://t.co/WyO0xuoy9f

The only remaining question is who will replace Horford in the starting lineup. Furkan Korkmaz started last game after some great showings off the bench but was quiet in the win over the Clippers. Matisse Thybulle, Alec Burks, Glenn Robinson and Shake Milton could also get time as the squad attempts to play with more balanced lineups.

Considering Philly is just fifth in the Eastern Conference entering the second half of the season, the lineup change could be what's needed to turn things around.