For a guy surrounded by so much change and professional uncertainty, Dak Prescott sounds strangely at peace.

"I'm for sure at peace," Prescott told Bleacher Report last week. "Because I don't control it. I worry about what I can control."

Prescott, the Cowboys' starting quarterback for the last four seasons, is officially a free agent. He's the next-man-up in the NFL's nine-figure quarterback sweepstakes. He could sign a life-changing contract tomorrow, get slapped with the franchise tag in a few weeks or theoretically (though there's a near-zero percent chance of it happening) hit the open market and sign with a new team.

In any event, Prescott will also be working with a new head coach for the first time in his professional career. The Cowboys' Super Bowl expectations, already sky high now that Mike McCarthy has replaced Jason Garrett, will become stratospheric the moment Prescott gets an approximate 1,400 percent pay raise.

Yet Prescott was relaxed and upbeat while making the sponsored Super Bowl media rounds in Miami. He had just finished his customary monthlong postseason vacation to visit family and fish the brackish waters off the Gulf Coast. "Unfortunately, when you don't make the playoffs, that month happens faster," he acknowledged. He was ready to get back to football, the Cowboys and the things he can control.

Prescott wasn't going to dish much dirt about the current state of his contract negotiations during a brief interview, of course. But he didn't sound like someone about to play holdout hardball with the Cowboys if things get sour.

"It's in my agents' hands and the Cowboys' hands," Prescott said. "I feel confident that something will be done. I'll continue to prepare for this season. No matter where I am or what the contract situation looks like, I'll be getting my body ready and preparing to play for the season."

That focus on the field, rather than on the financial pages, should be music to the ears of one high-profile Cowboys observer.

"Last season for the Dallas Cowboys, I heard a whole lotta talk about a whole lotta money," Cowboys Hall of Fame receiver turned NFL Network analyst Michael Irvin said later in the week. "That's all anybody was talking about. I didn't hear any talk about championships, about leaving your mark on the game."

The Cowboys' last offseason began with defensive end DeMarcus Lawrence getting franchise-tagged before signing a five-year, $105 million contract in April. It ended with Ezekiel Elliott signing a six-year, $90 million deal after a protracted training camp holdout. There were months of Prescott contract speculation in between, as his contract talks sputtered and stalled while Elliott cut in line ahead of him and Carson Wentz and Jared Goff signed extensions that raised the roof on young franchise quarterback salaries.

The Cowboys' failure to reach the playoffs in a wide-open division probably had more to do with Garrett's coaching blunders than with players' concerns over their next contracts. But money threatens to dominate Cowboys news this offseason as well. Prescott and receiver Amari Cooper headline a big-name free-agent class that also includes Byron Jones, Jason Witten, Sean Lee, Randall Cobb, Blake Jarwin and many others. The Cowboys have more than $77 million in cap space, but that's like having four pizzas for 20 people: there might be just enough to feed everyone, but as Elliott illustrated last year, it pays to be one of the first in line.

Ezekiel Elliott found himself in a standoff with the Cowboys that lasted weeks before Jerry Jones agreed to a six-year, $90 million contract with his star running back.Tony Gutierrez/Associated Press

Whatever its impact may be in the win-loss column, there's no doubt that Jerry Jones creates his own unnecessary distractions with his seat-of-the-pants approach to contract negotiations. Few other organizations would have prioritized Elliott over Prescott. Locking down a young quarterback before he hits free agency is Caponomics 101. The Cowboys are facing an offseason of money problems that they could have solved last year.

Fortunately, Prescott is at peace with the situation. But the best way for the Cowboys to keep his contract from becoming the story of the offseason is to pay him—not tag him, but actually pay him—as soon as possible.

If the Cowboys franchise-tag Prescott (as expected), it will eat up about $27 million of their $77 million in cap space, making stacking up other contracts tricky and rendering free-agent shopping nearly impossible. The Cowboys would be better off signing Prescott for six or seven years so they can hide some cap hits in the back end of the deal, making it easier to take care of Cooper and others while perhaps adding a piece or two. But shorter deals are more appealing to young quarterbacks because they allow them to hit the ever-rising market again in their prime; that has been a likely sticking point in the Prescott negotiations.

See that? We're talking about money instead of football again. That's the Cowboys Catch-22: they need to resort to creative accounting to keep a wild-card contender intact and then hope that McCarthy, a Super Bowl winner before his Packers tenure ran its course, can pull an Andy Reid and elevate the team in his second coaching stop.

The McCarthy-Prescott relationship, not the budget, should be the focus of the Cowboys' attention this offseason. Prescott told Bleacher Report that he has spoken with his new coach, who couldn't quite find the time to reach out to the quarterback during his first week on the job.

"We shared a conversation over the phone," Prescott said. "I just told him how excited I was to play under him, and vice versa.

"When you have a coach coming into this organization that has a Super Bowl, that's enough excitement right there," Prescott added. "There's a locker room full of guys itching to have what he has. We may not know the way to get there, but he does. And we're going to follow him because of it."

Prescott is also glad the Cowboys retained offensive coordinator Kellen Moore and is eager to learn how McCarthy's old Packers concepts, his new "McCarthy Project" ideas and Moore's holdover principles will mesh. "I think our offense is going, not in a completely different direction, but its own direction," he said.

There's a lot of learning to be done. But it cannot be done in earnest until Prescott has some sort of contract in place, which will also provide a sense of what combination of Cooper, Cobb, Jarwin, Witten and whomever he will be throwing to.

Ironically, this is a problem that Jones can easily spend his way out of: give Prescott $140 million or so tomorrow (with a prorated bonus that doesn't bloat the 2020 cap ledger), take care of Cooper and Jones, give Witten and Lee warm hugs and gift bags, start handing out playbooks and get on with the new era.

Mike McCarthy's arrival promises to give the Cowboys a new scheme around which to rally, but the team's history of complicating its contract negotiations doesn't appear likely to change.Brandon Wade/Associated Press/Associated Press

But Jones doesn't work that way. Every contract is a melodrama. Every opportunity to fix the cap situation turns into a crisis. And that takes its toll on a team that never quite has all the pieces in place or all eyes on the prize.

"The Dallas Cowboys have everything they need, shoulders-down," Irvin said. "The physical skill set? They have it. Now, center-of-mass and shoulders-up is what they have to work on. And center-of-mass means heart."

McCarthy has arrived to improve matters from the shoulders up. And Prescott, for one, has plenty of heart. Now it's up to Jones to be a financial wizard and make sure that money doesn't stand in the way of success.

Mauricio Rodriguez
via Inside The Star 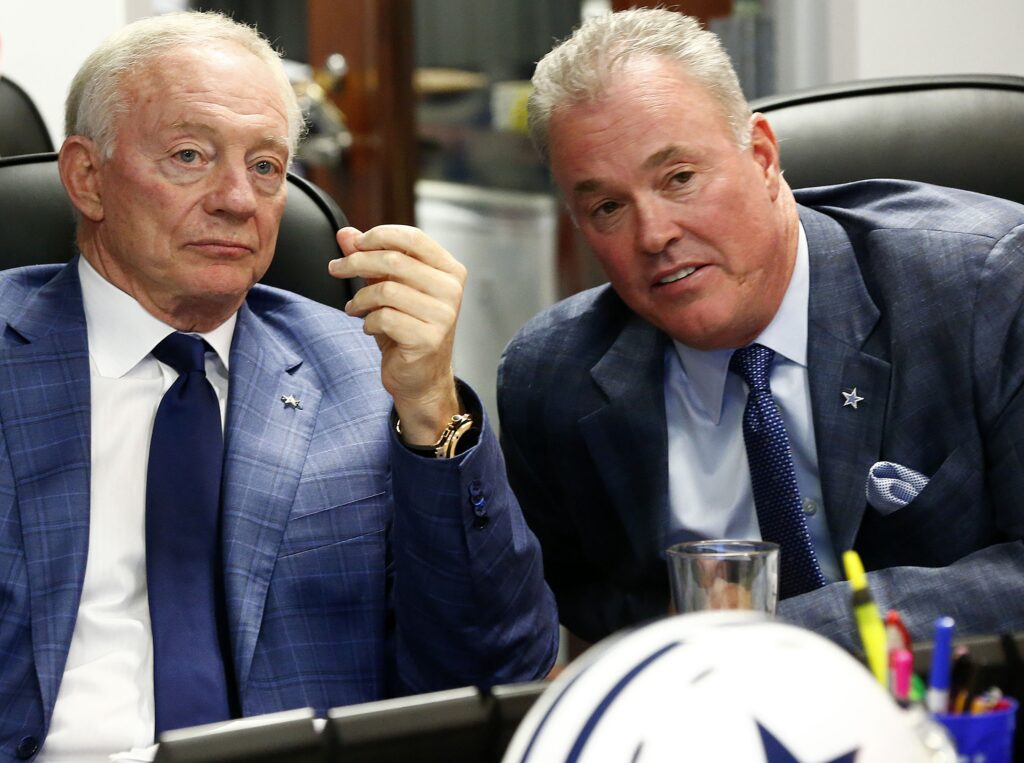