Four players who helped define the 2000s and 2010s in the NBA headline a star-studded 2020 Naismith Memorial Basketball Hall of Fame nominee list.

Kobe Bryant, Tim Duncan, Kevin Garnett and Chris Bosh are four of the 50 people nominated to join the Hall of Fame, per Tim Bontemps of ESPN.com. The finalists are set to be announced during All-Star Weekend in February and the newest class of inductees will be named in April during the Final Four.

While they are the biggest names, they are far from the only notable ones.

Coaches include Rick Adelman, George Karl, Rudy Tomjanovich, Gene Keady, Bo Ryan and Jay Wright, while players such as Shawn Marion and Michael Finley are on the list for the first time.

However, the 2020 class will be defined by Bryant, Duncan and Garnett in particular, regardless of who else is inducted. The trio was instrumental in ushering the NBA into a post-Michael Jordan era, dominating the highlight reels and leaderboards during illustrious careers. 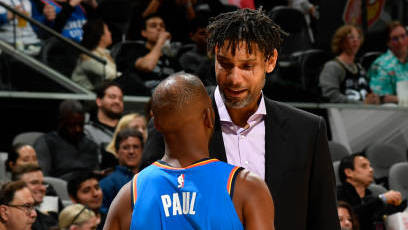 Bryant is a five-time champion, 15-time All-NBA selection, 18-time All-Star, league MVP, two-time NBA Finals MVP and 12-time All-Defensive selection who elevated himself among the all-time Los Angeles Lakers greats. To be remembered as a legend for the league's marquee franchise is an impressive feat in itself, and Bryant is on the shortlist of the best Lakers ever.

Duncan is one of the best big men in league history as a five-time champion, 15-time All-NBA selection, two-time league MVP, three-time NBA Finals MVP, Rookie of the Year, 15-time All-Star and 15-time All-Defensive selection who helped the Spurs become the preeminent force in the NBA for extended stretches.

Garnett is a one-time champion, nine-time All-NBA selection, league MVP, Defensive Player of the Year, 15-time All-Star and 12-time All-Defensive selection who became the first true superstar of the Minnesota Timberwolves and led the young franchise to eight straight playoff appearances before winning a championship on the Boston Celtics.

While Bosh may not be quite as big a name as the other three, he is one of the best players in Toronto Raptors history and won two championships alongside LeBron James and Dwyane Wade on the Miami Heat. He is also an 11-time All-Star.