Their quarterback is unproven. Their running backs appear interchangeable. Their receiving corps is a banged-up collection of youngsters, cast-offs and no-names. Their offensive line has battled major injuries all season. Yet the 49ers are 11-2 and are cruising toward home-field advantage in the NFC playoffs.

Kyle Shanahan is clearly coaching circles around his opponents.

Sure, the 49ers have a great defense. Show us a great defense with a weak offense and we'll show you the Bears or Broncos. And George Kittle may be Gronk 2.0, but one rock star tight end (who missed a pair of games with a leg injury) doesn't turn an offense full of unknowns into a unit that ranks second in the NFL in points, fourth in yards and eighth in Football Outsiders' DVOA. That takes a great scheme, masterfully installed and implemented.

The 49ers don't have a running back among the top 20 rushing leaders nor a receiver in the top 30 for receptions or yards. Quarterback Jimmy Garoppolo's stats, while solid, are strictly middle-of-the-pack. But Shanahan has some secret weapons in his arsenal, including some unique players and a scheme that bucks NFL trends and generates big plays in counterintuitive ways.

Let's investigate just how Shanahan has manufactured a championship-caliber offense out of Kittle and leftovers. We'll start in the last place most folks would look for explosive offensive plays. 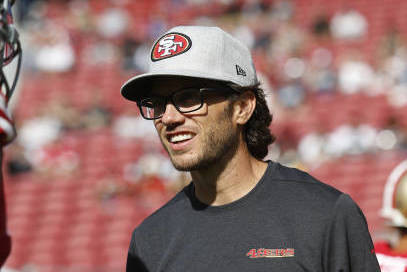 Kyle Juszczyk is the NFL's best fullback. He's practically the NFL's only fullback, or at least one of the few left on the planet up who line up for 25-50 offensive snaps per game.

According to Sharp Football, the 49ers use a two-running back personnel grouping on 31 percent (291 of 844) of their offensive plays. Only the Vikings (34 percent, 299 of 799) use two running backs more frequently. Most teams use two-back formations around 10-15 percent of the time, and the second back is often a speedster (Austin Ekeler in the slot for the Chargers, for instance), not a fullback.

Juszczyk is a good enough receiver to force opponents to take him seriously as more than a dump-off threat, but he's also a devastating lead blocker, which allows him to line up at fullback, tight end, in the slot or split wide. Sometimes he motions into the backfield before the snap, forcing the defense to tip its hand in coverage. Since defenses are no longer built to account for fullbacks as anything more than goal-line pile-drivers, Juszczyk's presence forces them into personnel and coverage binds.

You may have heard the expression "the fullback will lead you to the football" from television commentators or your old high school coach. Well, that isn't necessarily true when it comes to Juszczyk, who misdirects defenders as often as he wallops them. Here's a clip of him winding left to cut off the backside pursuit as Raheem Mostert runs off right tackle for a long touchdown against the Ravens. (Mostert had a second big run behind a similar blocking scheme in the same game).

Juszczyk also slipped past a Steelers defender who thought he was about to get blocked and raced up the field for a 27-yard catch. And then, of course, there's this sorcery:

Juszczyk told me the 49ers got this play from the Saints when they ran it last year. Shanahan trolling a little bit by running it against them lol In high school, KJ played quarterback in a Wing-T offense that incorporated some triple option concepts https://t.co/ToQewM7erx https://t.co/xRzT6VTijM

Shanahan is doing much more to confound opponents than just busting out some 1980s I-formation tactics, of course. His use of Juszczyk is integrated into an overall strategy that applies stress to defenses by going against the prevailing NFL offensive wisdom of the last 20 years or so.

Tight formations have become the new spread formations in the NFL this year. The Ravens stuff as many tight ends and running backs as they can fit in their backfield to facilitate Lamar Jackson's play-fakes and options. Sean McVay and the many McVaylings around the league love tight-bunch formations, with trios of receivers and tight ends aligned only a few feet from the right tackle's shoulder.

Shanahan, whose schemes stem from the same source as McVay's (namely his father, Mike Shanahan), is at the vanguard of this trend toward constricted formations. The 49ers deploy two-back backfields and clusters of receivers (including Kittle and rugged blocking wideout Kendrick Bourne) right next to the offensive line to great effect.

Tight formations create a paradox for the 49ers running game. Tevin Coleman has run into an eight-plus-defender box on 39.84 percent of his rushes, the second-highest total in the NFL, per Next Gen Stats. (Frank Gore of the Bills ranks first). Matt Breida and Mostert rank 13th and 14th, respectively, at 28.7 percent and 26.47 percent. So the 49ers committee slams into stacked boxes all the time, yet the team averages 4.6 yards per rush and has produced 14 runs of 20-plus yards (second only to the Ravens). An offensive line that lost both starting tackles and (now) its center for parts of the year can only take so much credit.

We've already explored part of the answer to the paradox: Juszczyk, Kittle, Bourne and others stringing the defense up and down the line of scrimmage. But the 49ers also get a boost from the most basic offensive weapon of them all: pure speed.

Off to the races

Oh, and none of them are actually the fastest person on the 49ers roster. That would be Marquise Goodwin, former Olympian and winner of an offseason $1 million track meet, who has battled injuries all year and just landed on injured reserve.

Players can usually only reach the 21-plus mph plateau in a dead sprint after they have burst through the defense and into the open field. That's where those constricted formations come in. Safeties lured into the box are in no position to chase Breida, Coleman or Mostert in the open field. Cornerbacks lined up inside the numbers are in trouble when forced to keep up with Samuel on a reverse. As a result, plays that might net 10-15 yards against a defense on its heels turn into 83-yard runs for the 49ers.

The ability to generate big plays from the running game has allowed Shanahan to achieve the one thing every NFL coach strives for: balance.

Play-action passing and other controversial subjects

In a league where offensive "balance" usually means that the coach waxes philosophical about "establishing the run" in the press conference but calls 50 passing plays in the game, Shanahan has achieved play-calling nirvana. The 49ers have rushed 424 times and attempted to pass 422 times this season. That's about as close to 50-50 as you can get.

All of that running (and all of those fullbacks and tight ends) set up play-action opportunities. According to Football Outsiders, the 49ers are the second-most effective play-action team in the NFL, averaging 9.7 yards per play (the Titans rank first). They use play action on 29 percent of their passes, the sixth-highest rate in the NFL.

No, Staty McAnalytics, "establishing the run" does not make play action more effective. But designing formations and personnel groupings that force defenses to keep bigger, slower defenders on the field, close to the line of scrimmage and guessing until well after the snap definitely makes play-action passing more effective.

Here's an example of it all coming together in Kittle's 61-yard touchdown against the Packers in Week 12. Notice how all 11 Packers defenders are within 10 yards of the line of scrimmage and close to the hashmarks against a three-tight end alignment. Play action and the threat of a reverse both eliminate the pass rush and force cornerback Kevin King to cover Kittle with no deep help, and Kittle has plenty of open space on both sides of him to sell a double move.

Here's another example, dating back to Week 2. Juszczyk motions into the backfield, creating a constricted formation that convinces the Bengals to cram 10 defenders into the box. Everyone bites on the play action, allowing the speedy Goodwin (hidden inside what starts out as a bunch formation) to slip undetected through the defense for a wide-open touchdown.

Kyle hit the Bengals with one of his favorite plays for the #49ers first TD of the day. This is the Leak concept, but typically he runs this with a tight end. This time, it’s Goodwin from a tight alignment. He’s been running this play for years. This is a new little wrinkle. https://t.co/1Ano3Y4Q7D

Most teams try to create explosive plays by spreading their Tyreek Hill types all over the field to create isolated mismatches in open space. It often works. When teams bring the fullback into the game, it's usually time to "play ahead of the sticks" and control the tempo. That also often works in the right situations.

The 49ers do something a little different: They use power concepts to exploit their team speed. Shanahan uses the trappings of ground-and-pound football to isolate Kittle, force defenders into footraces with the backfield relay team and lose track of Deebo-Goodwin type receivers. They aren't the only team that uses these tactics, but they're the best team in the league at it, except for those outliers in Baltimore.

Shanahan's strategies have worked in the past, of course. They came within a defensive collapse of winning a Super Bowl for the Falcons. They're also excellent at getting maximum value out of non-superstar personnel. The running backs don't have to be workhorses. The receivers don't have to be matchup nightmares. Garoppolo doesn't need a 90 mph fastball, elite wheels or a Tom Brady-level processor. Shanahan's system is built for role players and budget-friendly speedsters.

It's a blast to watch. It has also been effective against top competition. And it's much easier to talk about than to "figure out."

Shanahan's secret weapons aren't really secrets at all. The secret to stopping them, however, will become one of the biggest mysteries of this year's playoffs.

How Nick Bosa Hopes to Get Over ‘Nightmare’ Super Bowl

How Nick Bosa Hopes to Get Over ‘Nightmare’ Super Bowl