For Luka Doncic, Monday night was pretty much like any other he's experienced this season. He dominated, thoroughly and absolutely, en route to reaching another milestone as the Dallas Mavericks defeated the San Antonio Spurs 117-110.

His latest masterpiece: a 42-point, 11-rebound, 12-assist triple-double, his NBA-leading sixth of the year and 14th of his career. No one has tallied this many triple-doubles before their age-21 season, and this singular scoring effort earned him entry into a club to which only LeBron James previously belonged:

Luka Doncic joined LeBron James as the only players in NBA history to score 40+ in triple-doubles as 20-year-olds. Magic Johnson, Isiah Thomas and Oscar Robertson are the only players to put up such lines at age 21. The kid is consistently in historically elite company.

Doncic is now averaging 29.5 points, 10.7 rebounds and 9.3 assists per game on 61.2 percent true shooting. To call this bonkers doesn't convey the gravity of his ongoing dominance. He is rewriting history nightly, not just joining elite company but also forging it:

This is perhaps Doncic's most impressive feat. Carrying the Dallas Mavericks, tossing hallucinogenic passes, banging in ridiculously difficult step-backs, et al are all secondary elements of a larger accomplishment.

He is normalizing the unprecedented. 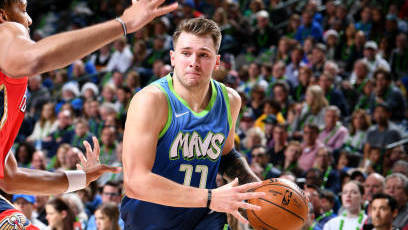 Era-appropriate caveats apply. Doncic's rebounding numbers are a revelation, but he's not exactly straining himself. Only 24.2 percent of his boards qualify as contested, the fourth-lowest share among everyone grabbing seven misses per game.

Double-digit rebounding numbers are impressive no matter what, especially for a wing, but Doncic is benefiting from a near-sweeping deemphasis of the offensive glass. Teams are running spacier lineups that pull their bigs outside the paint, and they're generally more concerned with getting back on defense than investing in second-chance opportunities.

Likewise, the NBA is in a golden age of the never-before-seen. As The Athletic's Seth Partnow wrote, a functional shift away from traditional roles has opened the door for milestone numbers:

"There are currently 61 minutes-qualified players averaging at least 20 points and 5 assists per 100 possessions, according to basketball reference, after 59 players hit those marks in each of the previous two years. By comparison, 2016-17 saw 47 such players and 2004-05, the year I generally consider the first 'modern' season, saw only 41 such seasons. Whereas in the past the 'pure point guard' who looked to score as a last resort may have been more of a thing, this increase shows how teams are now much more willing to simply put the ball in the hands of their most talented offensive player, regardless of nominal position."

This is not presented with the intention of minimizing Doncic's sophomore campaign. His is a performance augmented by potential counters, because they don't detract from what he's doing.

Even by the adjusted standards, he's tearing it up. The proof is in the lack of comparisons. Again: He's not latching on to formerly restrictive clubs or merely resetting records for his age group. No player has ever come close to matching his point, rebound and assist output per 100 possessions on his efficiency. Russell Westbrook had the counting-stat averages in 2016-17 but didn't sniff Doncic's true shooting mark.

The validity of what he's doing now is above reproach. It is objectively absurd—beyond compare and, most of the time, comprehension.

But will it last?

Loads of basketball is left to play. Doncic is only 13 game into his season. And while he's earned the benefit of the doubt that comes with being a top-20-or-better player, this isn't a matter of his superstar privilege. It is about him continuing to standardize what's not.

That is a huge ask for anyone, let alone a 20-year-old ferrying the essentiality of someone much older. And the supporting around him, while admirably deployed, gives him only so much help.

The Dallas bench has the league's best point differential per 100 possessions, and the team is posting a plus-11.0 net rating when Doncic is off the floor. All three of the most-used lineups without him are demonstrative positives.

Another thing those combinations have in common: They don't include Kristaps Porzingis.

In the 147 possessions he's logged without Doncic, the Mavericks have notched a minus-6.7 net rating. That is a terribly small sample size. Its returns should be treated as exploratory rather than actual.

More concerning is the Mavericks' performance with both of their stars. They're getting outscored by 6.2 points per 100 possessions in the minutes Doncic and Porzingis have played together. The latter at times seems to like purpose and presence. He's mostly orbiting ball screens others are setting for Doncic, and while there's value in firing off the catch, he's shooting just 32.7 percent on twos and 20.8 percent on threes off passes from his co-star.

The Mavericks have tried different combinations around Porzingis and Doncic without finding the answer. That isn't a potential death sentence, or anything close to it. Better chemistry will come in time, and Porzingis' inconsistency can, for now, be chalked up to his return to basketball after a 20-month hiatus.

In the interim, though, Porzingis cannot be considered a conventional No. 2. Nor do the Mavericks have a viable alternative. No other player on the roster is averaging more than 11 points per game, and Dallas is almost barren on other every-possession shot creators. (Shout-out to Jalen Brunson, though.)

This dynamic exacts a toll on Doncic in the form of responsibility. His offensive role has not been unburdened by the arrival of Porzingis. Over 70 percent of his made triples have gone assisted, up from 57.7 percent last season and the fourth-highest share in the league among everyone averaging at least 20 minutes per game.

That's not quite James Harden territory, but given Doncic's age and experience level, it may as well be.

He has the league's fifth-highest usage rate and subsists on step-back jumpers, tough floaters in the lane and a budding free-throw-attempt rate. Entering Monday night, he accounted for more than 44 percent of Dallas' offense this season between his scoring and points generated off assists.

It might be easier to dismiss the gravity of Doncic's role if not for last year's rookie wall. His efficiency fell off a cliff over the second half of the schedule. He slashed 41.9/28.0/69.0 and posted an effective field-goal rate of 39.8 on pull-up jumpers.

Maybe the same thing will happen again. With the Mavericks vying for a playoff spot, it certainly seems possible if Porzingis isn't Porzingis this season. Even the most seasoned one-star acts have their limits. Harden's has usually come sometime in the playoffs. Perhaps Doncic burns out in February or March or in the postseason, assuming Dallas gets there.

Unless that regression actually sets in, though, it makes zero sense to wait for it. Rookie walls aren't rituals. Doncic worked on his body over the summer. And let's not forget, the Mavericks staged a full-scale teardown around him last season, supplanting usable veterans with less-than-replacement-level players. That no doubt contributed to his drop-off.

For now, and until further notice, Doncic no longer shoulders the burden of proof. What he's doing isn't normal in a vacuum, but that's because it's a normal all his own.

Unless otherwise noted, stats courtesy of NBA.com, Basketball Reference or Cleaning the Glass. Salary and cap-hold information via Basketball Insiders, RealGM and Spotrac.