Pierre-Emerick Aubameyang has criticised Arsenal's defence and said his side are "literally giving goals to the opposition" after they lost a 2-0 lead to draw at Watford on Sunday.

Aubameyang, 30, scored a first-half double against the Premier League's bottom team before two errors in defence allowed Watford to creep back and finish level at 2-2.

The Gabon international spoke to Canal Plus (h/t Goal) after the game at Vicarage Road and said:

"Obviously we didn't expect that (the comeback).

"We knew that they were going to try and come back with good intentions, of the kind they demonstrated in the second half.

"Sadly, we were not able to deal with them well. I feel like we are literally giving goals to the opposition, it is up to us to progress in that respect."

Sokratis Papastathopoulos was sloppy passing the ball out from defence and allowed Tom Cleverley to pull one back for Watford.

David Luiz then gifted the hosts a penalty in the 81st minute when he bundled Roberto Pereyra over inside Bernd Leno's box, via Sky Sports (UK only):

Aubameyang didn't point out specific culprits in defence, however, and even pointed to Alexandre Lacazette's absence as a factor:

“I don’t want to accuse anyone, you could say that us the attackers could have killed the game off and score a third goal, so I am not going to say it is someone’s fault," he said.

“It is a shame to concede goals like we did… I think it (Alexandre Lacazette’s absence through injury) affects us. We know very well that he brings us so much in these sorts of games.”

Unai Emery's side splurged a club-record fee of £72 million to sign Nicolas Pepe from Lille this summer. The Ivory Coast international promises to form a devastating attack alongside Aubameyang and Lacazette, but there are suggestions Arsenal are top-heavy up front after failing to invest enough in defence.

Watford remain the only team in the Premier League yet to win a game this season, and they took their second point of the campaign on Sunday. Arsenal, meanwhile, have now failed to win in three games.

Aubameyang has five goals in as many games this season—two fewer than the Premier League's joint-top scorers, Sergio Aguero and Tammy Abraham.

Journalist James Benge attested to the pressure Arsenal welcomed, evidenced by the fact they finished with less than one-quarter of the attempts their hosts had (Watford ended with 31 shots, per WhoScored.com):

Watford have had 28 shots on goal. Arsenal have had seven. Individual mistakes have cost them but their system seems to have put themselves in a position to make them.

The deadline-day swoop to sign Luiz, 32, from London rivals Chelsea was initially seen as a coup for Arsenal and a positive move to strengthen their defence at the end of the transfer window.

However, the Brazilian hasn't been the reliable force Emery would have hoped for thus far.

Sports analyst Duncan Alexander pointed out a noticeable regression in the centre-back's discipline inside his own area following Sunday's penalty error:

It's pertinent that Luiz and Sokratis—Arsenal's two most senior centre-backs—were guilty of errors as the team dropped two points at Watford.

The Gunners might expect mistakes from 22-year-old right-back Ainsley Maitland-Niles or attack-minded left-back Sead Kolasinac, but Emery will be frustrated his more experienced stars were at fault for the goals.

Former Hornets goalkeeper Richard Lee appeared on Love Sport Radio following the draw and said it was like Arsenal were "trying to invite Watford to score" in the second period:

🗣️ "It was just embarrassing" Richard Lee (@dickielee) thinks that if Arsenal play like they did against Watford yesterday, they have no chance of finishing in the top four. #AFC 🎥 Watch - https://t.co/da7l7YwUKh 📲 Listen - https://t.co/XWhRQh9myF https://t.co/CfWaY94d1Y

Emery's Arsenal have kept only one clean sheet in five outings this term when they clinched a 1-0 win at Newcastle United on the opening day of the season.

The north Londoners turn their attention to the UEFA Europa League on Thursday when they travel to face Group F opponents Eintracht Frankfurt, who have won both of their league games at home this term. 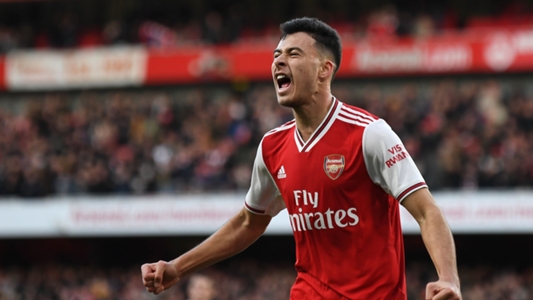