The last time the NBA team in New Orleans won the draft lottery, there was a feeling that things were finally going right for a franchise that was teetering on the brink of extinction in the Big Easy.

The franchise—then known as the Hornets—found itself at the epicenter of the transformative questions in the league's modern era.

Could small-market teams survive the rigors of a sports league that was decidedly tilted in the favor of glamour markets? Could a team in a city like New Orleans get—and keep—its stars?

After New Orleans defied its 6 percent odds Tuesday night and secured the No. 1 pick in the 2019 draft, that is the question once again.

"Griff was never going to trade AD," a rival general manager told Bleacher Report on Tuesday night, referring to David Griffin, the Pelicans' new executive vice president of basketball operations. "That's why he got the job."

Two other executives in the league confirmed that theory to B/R. One also confirmed a report by ESPN's Adrian Wojnarowski that Griffin spent the hours after the lottery scouring the league for players to pair with Davis, not seeking scenarios to trade him. 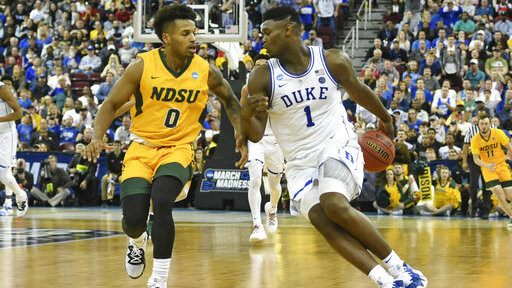 Within an hour after the conclusion of the lottery broadcast, Griffin had received 222 text messages, a league source told B/R. One can only wonder if any of them were from Davis' agent, Rich Paul.

Now that Zion Williamson (the likely No. 1 pick) will presumably be heading to New Orleans, does that change Davis' mind about the trade request that his agent, Paul, made in January?

"Not at all," a person familiar with Davis' position told B/R.

So this is where we are: Griffin is staking his reputation on not trading Davis, while Davis still wants to be traded.

"He can stay now," a rival exec said of Davis. "Winning the lottery changes everything."

It changed things for Pelicans coach Alvin Gentry, who threw his arms up and yelled "F--k yeah!" in the drawing room when it became apparent that New Orleans had secured the No. 1 pick. Gentry was wearing a navy blue, silver-striped Zegna tie that Griffin had given him; it was the same tie that a Cavs official had worn when Cleveland won three draft lotteries.

"I did everything," Gentry said. "But I forgot my Mardi Gras beads."

Before the lottery began, Gentry sat down and wrote on an NBA-logo notepad, "This is our moment."

Just wait until owner Gayle Benson gets the expense report from the celebratory dinner.

"We will have a big receipt to turn in," Gentry said.

No matter how tasty the post-event delicacies, this is the key question for Gentry: Does this change anything for Davis, the franchise superstar who wants out?

"It'll give him reason to pause now," Gentry said.

It makes you wonder: What if Paul had still been in New Orleans when the franchise won the No. 1 pick— and the rights to Davis—in 2012? Would he have stayed?

We'll never know. But we will find out if Griffin will be able to sell Davis on his vision for building a championship team in New Orleans with Davis as the centerpiece, the same way he did in Cleveland with LeBron James.

However it turns out, make no mistake: This is another of those last stands for the NBA franchise that could have died long ago.

After the 2011 lockout, New Orleans was the poster franchise for the "have-nots" in a "have" or "have-nots" league. With the city still devastated by the aftermath of Hurricane Katrina in 2005—and beset by troubled owner George Shinn—the NBA took over the team in 2010. It was the pro sports version of bankruptcy.

Paul, the face of a troubled franchise, had seen enough and demanded a trade.

Then-commissioner David Stern vetoed a deal that would've sent Paul to the Lakers in the immediate aftermath of the sport's five-month lockout. Paul was then shipped to the Clippers instead.

The Pelicans tried to build around Davis, but they managed to make the playoffs only twice in seven years.

They now have a chance for a do-over. There's a new sheriff in town, Griffin, who has built a championship team before and isn't interested in trading his most valuable asset just when things are beginning to look up.

Was Gentry right? Is this the Pelicans' moment? Is this the moment of truth for the NBA franchise in New Orleans that refuses to die?

It most certainly is.