In a showdown between two of the Eastern Conference's top teams, the Philadelphia 76ers scored a huge win over the Milwaukee Bucks 130-125 at Fiserv Forum.

The Sixers have been looking for a statement road win this season. They were a combined 0-5 against the Bucks, Toronto Raptors and Boston Celtics away from Philadelphia prior to Sunday's victory. Milwaukee has been virtually unstoppable at home with a 27-6 record in 2018-19.

The individual matchup between Joel Embiid and Giannis Antetokounmpo lived up to the hype. Embiid's 40 points were his most in a game since Jan. 2, and he added 15 rebounds for good measure. Jimmy Butler added 27 points. Ben Simmons finished with eight points, nine rebounds and nine assists.

Antetokounmpo scored a career-high 52 points, grabbed 16 rebounds and dished out seven assists. No other Bucks player had more than 19 points in the loss. 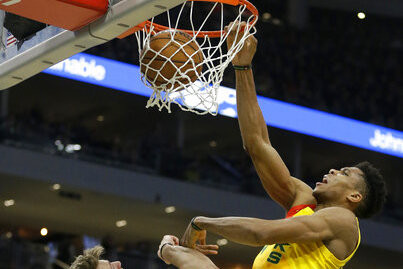 It's not a secret Embiid is the best player on Philadelphia's roster. He leads the team in scoring (27.1 points per game), rebounding (13.6) and is averaging a career-high 3.4 assists per game.

The difference a healthy Embiid makes for the Sixers can't be overstated. The team was just 4-4 in the eight games he missed because of a knee injury. They lost by a combined 31 points to the Portland Trail Blazers and Houston Rockets, blew a 14-point lead at home to the Golden State Warriors and lost by one to the Chicago Bulls.

Embiid stepped up in a big moment against the Bucks, hitting a crucial three with 35 seconds remaining to put Philadelphia back up by seven.

In four games since Embiid's return, Philadelphia is 4-0, and he's posted four straight double-doubles. The 24-year-old started this game like a man on a mission, showing off his handle with the potential NBA MVP trying to lock him down:

For all of the hype around the 76ers following the in-season acquisitions of Jimmy Butler and Tobias Harris, Embiid is the engine that makes the car go.

Per NBA.com, Philadelphia's net rating with Embiid on the floor is plus-8.3. For perspective, the only team with a higher net rating than the Sixers with Embiid this season is Milwaukee (+9.0).

The rest of the Sixers' core four has to play up to their potential for them to get where they want to go in the playoffs. Simmons, in particular, must show he isn't a net negative like he was last season in the Eastern Conference semifinals against the Boston Celtics.

But Embiid's ability to dominate in every facet of the game, while also making everyone around him better, gives the 76ers a leg up as they prepare for the postseason.

Bucks head coach Mike Budenholzer has been arguably the best offseason acquisition any team made last summer. He took a roster that had a lot of question marks behind Antetokounmpo and transformed it into the best team in the NBA.

The biggest change has been a successful emphasis on three-point shooting. Brook Lopez, who didn't even make a three-pointer until his seventh NBA season, is suddenly a prominent shooter with a 36.5 percent success rate on 6.3 attempts per game in 2018-19.

One reason for Lopez's success behind the arc is all of the attention Antetokounmpo draws from opposing teams. The 30-year-old ranks eighth in the NBA in wide-open three-point attempts with four per game, per NBA.com.

Sunday's game against the Sixers, though, exposed one key contributor the team can't replace regardless of who is running Budenholzer's system: Malcolm Brogdon.

ESPN.com's Adrian Wojnarowski and Malika Andrews reported Brogdon is expected to miss six to eight weeks with a minor plantar fascia tear in his right foot. He suffered the injury in the first quarter of Milwaukee's win over the Miami Heat on Friday.

Keith Smith of Yahoo Sports broke down what that timetable means for the playoffs, as well as what Brogdon accomplished this season:

Six weeks will put Malcolm Brogdon our through the first round of the playoffs. Eight weeks means he’s out through most, if not all, of the second round too. That would be a major loss for the Bucks. Brogdon will finish a very good individual regular season as a 50/40/90 guy.

Khris Middleton has been thought of as the Bucks' second-best player this season. He certainly belongs in the conversation, but Brogdon has stepped into the role of Robin to Antetokounmpo's Batman.

This is a sneaky big injury. Brogdon has had a fantastic season, does a little bit of everything for the Bucks. No one on the bench can really replicate what he does. https://t.co/ReUBCnNC9J

The loss of Brogdon gave Budenholzer a chance to see which player on his team would step up to support Antetokounmpo.

Instead, the Bucks' starters outside of Antetokounmpo combined to score 47 points on 18-of-50 shooting.

It's not time for Budenholzer to enter full panic mode after one loss to an excellent opponent, but this was an eye-opening look at what life without Brogdon could be like for the next six to eight weeks.

The 76ers have an off day before finishing their brief two-game road trip against the Charlotte Hornets on Tuesday at 7 p.m. ET. The Bucks will host the Los Angeles Lakers on Tuesday at 8 p.m. ET.