LOS ANGELES — As the Golden State Warriors fight for the chance to return to the NBA Finals for their fourth title in five years, Kevin Durant inches closer to free agency.

If money is Durant's driving force this summer, Golden State should be a lock to retain the 30-year-old forward. The two-time NBA Finals MVP can opt out of the final year of his contract at $31.5 million, making him eligible to re-sign with the Warriors for up to five years at $221.3 million (more than any other franchise can offer).

But Durant has already shown he's willing to pass up the most lucrative deal.

He left the Oklahoma City Thunder in 2016 to join the Warriors on a two-year, $54.3 million contract instead of accepting nearly $153 million to stay with the Thunder for five seasons. Twice he re-signed with the Warriors on one-plus-one contracts, giving him the flexibility each year to negotiate a new contract. By sacrificing financially, he's allowed the Warriors to keep their championship roster together.

But his willingness, historically, to put aside money may be why the team should be concerned about his future with the franchise.

In October, Durant did tell Marcus Thompson II of The Athletic: "I never got the [massive] deal. I've just seen a bunch of dudes around the league making so much money—and I'm happy for them. But I know I deserve that too. That's the only thing I'm probably thinking about, to be honest." 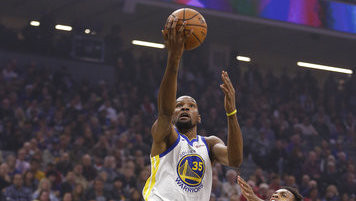 Then, at the end of December, Durant told Posted Up with Chris Haynes: "I just want to make as much money as I can on my next deal."

But Durant wasn't under oath. He won't be guilty of perjury if he feels differently in July.

Will he want to further the Golden State dynasty, or will he prefer to rejuvenate a downtrodden franchise like the New York Knicks as the team's unequivocal true star? Will he want a legitimate chance to compete for a title elsewhere and join LeBron James and the Los Angeles Lakers?

The decision may be six months away, but teams like the Knicks and Lakers have spent years managing their salary-cap flexibility to afford a player of Durant's stature. Their challenge is obvious: Why should Durant leave Golden State?

The Warriors haven't lost a playoff series since Durant joined in 2016. This season, the team has waded through an injury-related slow start to climb to 27-14, just one game behind the Western Conference's first-place Denver Nuggets (27-12). At full strength, Golden State should still be considered the favorite, even if some of the individual pieces are showing signs of wear and tear, including Klay Thompson (shooting 35.2 percent from three-point range) and Stephen Curry (11 missed games). And Draymond Green is another issue entirely (beyond his 24.2 percent shooting from behind the arc, down 5.9 from last campaign).

The public spat between Durant and Green in November may be a faded memory by July, but if Durant looks for a change of scenery, that could be part of the reason why. Winning cures many ills, but will hurt feelings rise to the surface if Golden State doesn't get it done this year? The team may run out of gas after so many deep runs into June, and if Durant believes the championship window is closed, it may be time to move on.

If so, he may face a similar decision to James, who left the Cleveland Cavaliers for L.A. last summer. James could have chosen the Philadelphia 76ers, giving him a team with more established talent in Joel Embiid and Ben Simmons. By staying in the Eastern Conference, James would have been able to once again avoid the Warriors until the NBA Finals.

Similarly, Durant could look to join the youthful Knicks, one of the worst teams in the league at 10-31. New York has enough spending power to re-sign Kristaps Porzingis as a restricted free agent and still lure Durant. The 23-year-old Latvian is on the mend after tearing the ACL in his left knee in February. Assuming Porzingis can return at full strength, he and Durant would make for a potent offensive frontcourt.

"[Porzingis] can shoot, he can make the right plays, he can defend, he's a 7-footer that can shoot all the way out to the three-point line," Durant told Royce Young of ESPN.com in 2016. "That's rare. And block shots—that's like a unicorn in this league."

The Knicks are also developing intriguing rookie Kevin Knox, who's averaging 12.1 points per game but shooting just 37.2 percent from the field (35.3 percent from three-point range). New York has a steady scorer in Tim Hardaway Jr., but why would the Knicks have the leg up over other Eastern Conference teams that could have spending power, like the solid Indiana Pacers, rising Brooklyn Nets or established 76ers?

Is there value in being a superstar in New York?

"Where else could he go to get what he's looking for, to be the best in the game?" legendary Knicks broadcaster and former player Walt "Clyde" Frazier asked Stefan Brody of the New York Daily News. "If he could bring a title to New York, that's going to catapult him with [Michael] Jordan and LeBron, I would think."

Maybe so, but Durant would have to passionately agree to make that move, and the star downplayed any rumors connecting him to the franchise just this week. If Durant did go to New York, would the Knicks—with their current pieces—even be clear contenders in his first year?

"He's got a bright future ahead of him" - Kevin Durant on Kevin Knox https://t.co/nKGEXvaflg

A similar situation didn't deter James from going to Los Angeles. Before James suffered a groin injury in a win on Christmas Day over the Warriors, the Lakers (22-19) were vying for a top-four seed in the Western Conference. Durant may see a bright future as the clear star in New York. Just as the Lakers could trade away some of their young core to surround James with established veterans, so too could the Knicks with a commitment from Durant.

Or maybe the Lakers would appeal to Durant, who would form a dominant duo with James in one of the NBA's largest markets. And the Lakers wouldn't have to give up significant talent to make room. They would be able to retain their youthful core of Lonzo Ball, Kyle Kuzma, Brandon Ingram and Josh Hart while preserving enough salary-cap space for both Durant and James.

Los Angeles is also believed to be targeting New Orleans Pelicans forward Anthony Davis, and while the odds of landing both stars are slim, it's not impossible. If Durant is willing to take a slight discount—despite his recent comments to the contrary—that possibility becomes slightly higher.

But doesn't Durant view James and the Lakers as a toxic situation?

Much was made of Durant's comments to B/R's Ric Bucher, but the forward was calling out the "fanboys in the media." He didn't say he wouldn't want to play with James—just that he'd understand if someone chose not to.

"Even the beat writers just fawn over him," Durant said. "I'm like, we're playing basketball here, and it's not even about basketball at certain points. So I get why anyone wouldn't want to be in that environment because it's toxic. It's not LeBron's fault at all; it's just the fact that you have so many groupies in the media that love to hang on every word. Just get out of the way and let us play basketball."

James and Durant have since spoken on the matter.

"Listen, he told me how he felt, and he apologized on how it came out. And I said, all right. We moved on from there," James told Rachel Nichols of ESPN.

With or without Davis, the Lakers could offer Durant a fresh opportunity to continue his title pursuit. It will be a question of what matters most to him. If money isn't the deciding factor and he believes he can win at a high level anywhere, then Golden State, New York and Los Angeles could be viable options.

It's worth noting that Durant may want to come to L.A., although not to play with James. If the Clippers get out of Danilo Gallinari's contract ($22.6 million remaining after this season)—either by trade or buyout—the team would have enough spending power to lure both Kawhi Leonard and Durant.

ESPN.com's Brian Windhorst recently said Leonard doesn't want to be teammates with Durant because he has a grudge stemming from 2014, when Durant said that Leonard was a system player (h/t Ashish Mathur of Clutch Points). But relationships wax and wane. Rumors aren't gospel, and a simple conversation between the two stars might be enough to quash any perceived beef.

Other franchises will make their cases if Durant is ready to explore his options. He's one of the top players in the league and will be for years to come. His true motivation remains a mystery, which is why his future is such a hotly debated topic.

The decision is just over half a year away.