The NBA's new rule changes this season, which were implemented to cut down on the amount of contact defensive players can make, have led to a major influx of scoring.

But NBA Commissioner Adam Silver said the new rules are being enforced as planned.

"We had a call with our competition committee last week, which is made up of coaches, GMs, owners, players, officials to discuss just that," he said during a press conference Thursday evening, per ESPN.com. "And the consensus, or the strong feeling from the group was that the rule changes were happening as we intended."

Silver added that one of the aspects of the rule changes being closely monitored was consistency.

"The question that seems to be coming back from some of the coaches and players is in essence is how much physicality will be allowed on defense," he said. "Everybody's feeling their way through this a little bit. What we're hearing is the teams will adjust to wherever we end up, they just want to make sure there is consistency across the league."

Those changes haven't been popular across the board.

"Defense isn't really an emphasis anymore in this league," Draymond Green told reporters on Oct. 21, per Nick Friedell of ESPN.com. "So I think you're seeing it all around the league with these high scores. We know what the emphasis is."

"It's challenging, that's for sure," he said, per Justin Verrier of The Ringer. "You've got so many powerful offensive teams that you're not going to have many possessions that you can be behind because most teams in our league are going to make you pay."

Coming into Thursday night, NBA teams were averaging 112.3 points per game, which would be the highest average for a season since the 1970-71 season, per ESPN.com.

Of course, the NBA in general is trending toward a more offensive game, with teams adapting the strategy of spacing the floor and shooting a flurry of threes, popularized by the Golden State Warriors. Teams also play at a faster pace, taking shots early in the shot clock and pushing the rock in transition.

Add in the increased pace and spacing with the rule changes, and it's hardly surprising the league is trending toward a more offensively charged game.

Giannis Suspended One Game for Headbutt 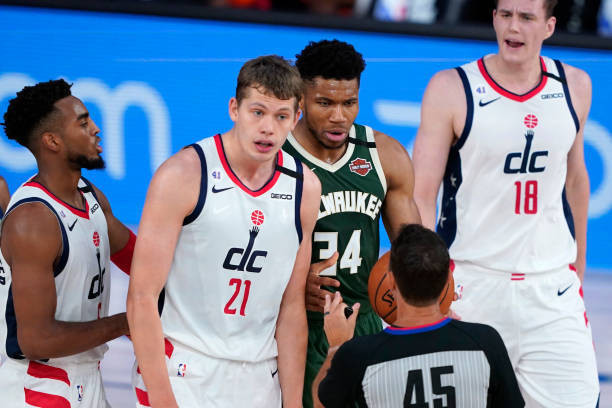 Giannis Suspended One Game for Headbutt