Olivier Giroud reportedly wants to stay at Stamford Bridge and fight for his place under new manager Maurizio Sarri this season despite holding talks with Marseille.

Spencer Morgan and Simon Jones of MailOnline reported Chelsea are still pursuing a £53 million deal to sign Juventus striker Gonzalo Higuain, but Giroud is determined to keep his place in the squad.

The 31-year-old played a prominent role for France on their road to 2018 FIFA World Cup glory despite failing to score in Russia, and he is yet to return to south-west London from his post-tournament holidays.

Asked Simeone about Atletico's reported interest in Olivier Giroud. "To mention someone specifically is very difficult. I always say during the transfer window that everything is possible until it closes." #CFC

A move to the Wanda Metropolitano could interest Giroud as he would be just as likely to play the back-up role under Simeone as he would under Sarri, except with the addition of UEFA Champions League football in Madrid.

The frontman was brought to Stamford Bridge in January by Sarri's predecessor, Antonio Conte, and there's a chance the new manager may not hold the same affection for the veteran forward that his compatriot did.

Conte has in the past shown a preference for holding at least one tall, strong centre-forward in his ranks—like he did with Fernando Llorente and Mario Mandzukic at Juventus—but Sarri could be open to selling Giroud.

The French attacker will turn 32 in September, but the Daily Mail's Charlie Skillen saw the value he brought to the table in the second half of last season and suggested Alvaro Morata may be the more sensible asset to sell:

On the other hand, Morata looks as out of sorts as ever. Big fan of Giroud, but convinced Chelsea need a first-choice striker going into the new season, ideally with Morata going out - a move that’s not worked for anyone.

Morata, 25, would certainly fetch the larger fee considering he moved to Stamford Bridge from Real Madrid for £60 million only last summer, while Giroud is a tested quantity in the Premier League.

Writer Mark Worrall also spotted Giroud's worth after he scored five times in 19 appearances for the Blues last season and showed up for the big occasions—just as he did for his national team in Russia:

@haribo515 Higuain for £20m fair enough. One season wonder - a bit like Giroud helped us win the FAC, he could help Sarri - £50m is silly money

This summer's August 9 transfer window deadline places some immediacy on the deal, as although Premier League clubs will still be able to sell until August 31, the former is their cut-off date for signing any new players.

Sarri won't want to risk being left short of attacking options when the season gets under way, although this summer could also be Chelsea's last chance to bag a fee for Giroud, who's in the last year of his 18-month contract.

Can You Name Every Chelsea Coach in Prem History? 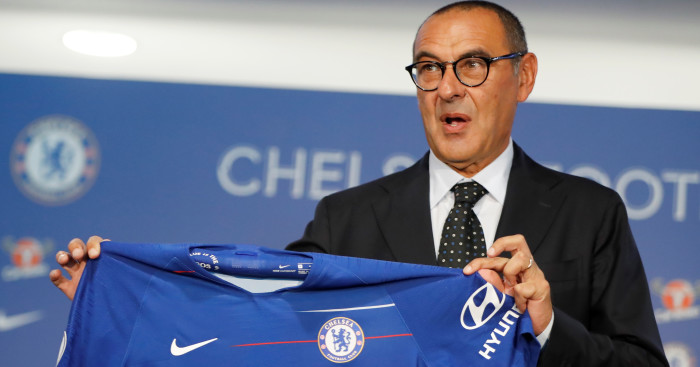 Can You Name Every Chelsea Coach in Prem History?