Kemba Walker, Irving and Gordon each advanced to the finals, and the latter two put up a score of 20 points to force an extra session.

In the end, it was Gordon who came through with a final score of 21 to earn the win: 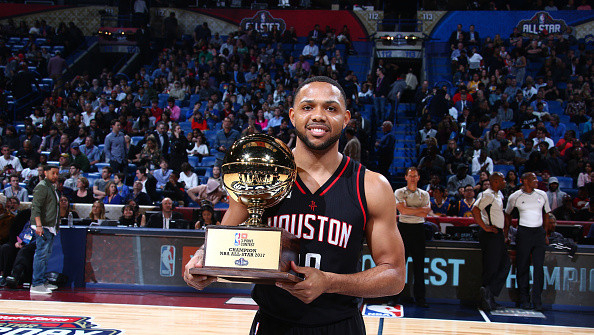 Here are the full results from the Smoothie King Center in New Orleans:

There were some major surprises in the first round, with Wesley Matthews, C.J. McCollum and Kyle Lowry all struggling immensely.

Even defending champion Klay Thompson couldn't make it out of the first round after finishing with just 18 points. Moke Hamilton of Basketball Insiders mocked the performance:

Klay just performed as badly as Curry did in last year's Finals.

.@TheofficialEG10 finishes 💡s out &amp; takes over 1st place in the #JBL3PT with 25 points on @tntdrama #NBAAllStar https://t.co/GpYThLUerd

Walker struggled in the finals, but Irving and Gordon matched each other with 20 points. Gordon had a chance to win in regulation but went just 1-of-5 on the final rack.

This led to overtime, with the two finalists going one more time through in 60 seconds.

Irving put up a respectable score of 18, but it wasn't enough as Gordon came through with a 21, including making four out of five in his money ball rack.

Many on Twitter were quick to jump on Irving for his recent "Earth is flat" comments:

The world is yours, Eric Gordon. Flat or round.

Gordon wins it. He dominated his money ball rack. Proves to Kyrie that the ball and Earth are both round.

Marc J. Spears of The Undefeated and Michael Lee of The Vertical took a more serious look at the highs and lows of Gordon's career:

Rockets guard Eric Gordon, who certainly had a rocky career with the Pelicans, wins the NBA 3-point competition in New Orleans. #NBAAllStar

Eric Gordon is having quite the year in Houston. He's healthy. He's winning. Now he's the 3-pt champ. Been a solid career comeback

This is a memorable moment for a player in the midst of an outstanding season.

"It's all about gettin' hot," Gordon said after the win, per Turner Sports.

The guard added, "It was just my night to tonight," per John Reid of NOLA.com.

This doesn't seem like a lot of confidence from a player who just beat out some of the top shooters in the NBA, but the award is something no one can take away from him.