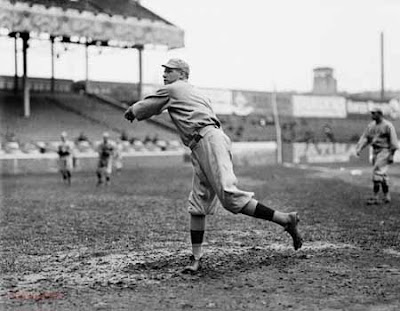 Babe Ruth was not only a great slugger but one of the best pitchers of his era, and could have made the Hall of Fame as pitcher if given the chance to only pitch during his career with the Red Sox and Yankees.

The first instinct of baseball fans when talking about Babe Ruth is to talk about his hitting exploits. He is best known for hitting 60 homers in a season and 714 over his career.

However, he was an excellent pitcher before he became an everyday outfielder.

He had a lifetime record of 94-46 and an ERA of 2.2770. His ERA is 16th best among all major league pitchers. Five of the pitchers with a lower ERA than Ruth pitched before 1900 at some point in their career.

The only active pitcher with a lower ERA is Mariano Rivera with a 2.2717, which is barely lower than the 2.2770 of Ruth.

Ruth may have pitched in the deadball era for the most part, but that doesn’t mean he wasn’t a good pitcher. He allowed only ten homers in 1,221 innings.

He pitched nine shutouts for the Red Sox in 1916, a record that stood until 1978 when Ron Guidry tied it.

There is no doubt that Ruth could have been voted into the Hall of  Fame as a pitcher if he never became an everyday player. However, he was an even better hitter.

These are some of the highlights of  his pitching career:

13th all time in fewest homers allowed per nine innings with a 0.0737 mark.

It is debatable whether Babe Ruth would still be the all-time home run champion if he hadn’t pitched. Nobody was hitting many homers in the AL at the time he was pitching until he hit 11 in 1918.

Ruth made it easy to decide to switch him to being a hitter in 1919 when he hit 29 of the 33 homers hit by the Red Sox that season.

In summary, there is no doubt in my mind that Ruth was the best player in baseball history. He is the only player that I know of that could have made the Hall of Fame either as a pitcher or a hitter.