49er Football is Back! 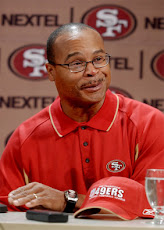 Last season 49er fans listened to all the hype. The 49ers were going to come back and take the NFC West. Unfortunately, Mike Nolan was still at the controls. Like his dad, former 49er coach Dick Nolan, he was a defensive specialist, and also like his dad, he was a stubborn and unbending man. He played defense not to lose, with a very conservative loose scheme that resulted in few sacks and little pressure on the opposing offense.

Offensively, Mike Nolan just didn't get it. He inevitably made the wrong call in crucial situations, and even relied upon guard Larry Allen in a game the previous season, to determine whether or not to kick a field goal in a crucial situation at game's end. Mike just didn't have it and everyone knew it.

At the same time, the offense relied upon a relic, Mike Martz. a man who stubbornly relied upon the 7-step drop, no matter how often his quarterback was sacked. In the fourth quarter of most games Martz rarely called a running play. His rigid system didn't allow for the quarterback to call audibles. Then, in one bonehead moment, the 49ers had a chance to derail the Arizona Cardinals on Monday Night Football. With time running out, Martz called for Michael Robinson to run a dive play that is only designed to gain a yard. Unfortunately, the ball had been placed at the 2 1/2 yard line. Robinson gained the yard as the play was designed, but it was Martz' not knowing where the ball was, plus his system which didn't allow for Shaun Hill to call an audible, and that was the season.

Despite having to deal with Martz and J.T. O'Sullivan, Singletary was able to finish the season with a 5-4 record. Jimmy Raye is an upgrade over Martz. He develops his offense around the talents of his players, and features a power running game between the tackles and quick slant and play action passes.

Much has been made about the competition between Shaun Hill and Alex Smith for the starting quarterback position. Unless Hill takes a complete nosedive, the job will be his to start the season. Singletary can thank Hill for saving his job last season. Shaun came aboard and played with poise and toughness and his dive for a first down without his helmet in a crucial game will leave pleasant memories in the minds of Niner fans for a long time.
The only sensible move is to start Shaun Hill this season. He has earned it and it will take unnecessary pressure off of Alex Smith, who needs to sit and watch a quarterback with game management skills, quick decision making ability, and poise and coolness in the pocket. To throw him out there at the start and have him flop may well be the end of Alex Smith in San Francisco. Instead, giving him time to learn the new system and watch would be the best move Singletary can make.
Backup Damon Huard is a proven veteran who could easily step into the #2 spot without hesitation. He has a strong, accurate arm and plenty of experience. Rookie Nate Davis is a guy with a whole lot of potential and little in the way of experience. He is a project and perhaps a worthwhile one. The Niners will have to make a decision as to whether they want to keep four (4) quarterbacks.
Compared to last season, we have lost O'Sullivan and added an experienced backup. In addition, we now have a more experienced and confident Shaun Hill, and an Alex Smith with far greater upside potential than the kid with the damaged shoulder of 2008. Add Nate Davis to the mix.
QUARTERBACK: Big Improvement
WIDE RECEIVER
Last season we had Isaac Bruce, Bryan Johnson, and inexperienced wideouts in Josh Morgan and Jason Hill, as well as the injured Arnaz Battle and newcomer, pencil-thin Domenique Ziegler. This season we have Bruce returning as well as Morgan and Hill back, both of whom could have breakout seasons. We have Brandon Jones, a solid receiver with strong hands from the Tennessee Titans, Ziegler and Battle return to battle for the #6 receiver position, and we have the dynamic and explosive Michael Crabtree from Texas Tech, who the Niners unexpectedly snagged at the #10 pick in this year's draft.
Wide Receiver: Huge Improvement
TIGHT END
Vernon Davis is looking forward to working with the Offensive Coordinator who developed Tony Gonzales. Unlike Mike Martz, who considered the tight end an afterthought as a receiver, Jimmy Raye features passes to his tight end and may occasionally go to a two-TE formation. This should please the dangerous Delanie Walker and huge rookie, Bear Pascoe from Fresno State. The Niners also have tough JJ Finley, who unfortunately has no room on this deep roster.
Tight End: Big improvement.
RUNNING BACKS & FULLBACK
Starting with fullback, the fact that Mike Martz didn't even want Moran Norris and now he's back at the request of Frank Gore in a Jimmy Raye power running offense speaks volumes about the positive direction in which this team is headed. Singletary and Raye have a plan and getting the best at each position is a good way to start. Norris is a great run blocker and may be backed up by Zak Keasey, depending upon whether the 49ers decide to keep four (4) or five (5) backs.
At the halfback position, Frank Gore is ready for bear and has a new backup to replace Deshaun Foster in Glenn Coffee, a rather small but tough back out of Alabama. Coffee is a hard runner who must overcome his tendency to fumble. The third running back spot will be held by Michael Robinson, a talented back who was horribly mismanaged under Mike Nolan. He has never been given an opportunity to learn the position and has had very few touches from scrimmage. However, last season Singletary found a way to use him as a receiver out of the backfield. Michael responded with 17 catches for 201 yards, and an 11.9 average per catch which ranked #3 in the NFL among RBs with 15 catches or more.
Robinson's value to the team is illustrated not only in his outstanding special teams play, but by the fact that the 49ers have the luxury of counting MRob as the #3 RB and #2 FB, thereby allowing the team to carry either four (4) QBs or six (6) WRs. Kory Sheets of Purdue, a speed burner with fumble problems and a mouth that got him in a lot of trouble, will very likely make the Practice Squad where he will replace notorious underachiever Thomas Clayton who will be released.
Running Back: Improved.
OFFENSIVE LINE

Last season the 49er Offensive line showed signs of becoming decent, but suffered from numerous breakdowns, including the swan song for Jonas Jennings. Eric Heitman returns at center where he had a very good season and should only get better. He is one of the young vets the 49ers have been developing that is starting to come into his prime. He is backed up by Cody Wallace.

Guard should be a bright spot as Chilo Rachal could well have a breakout season. The tough, physical USC grad will be one of two guards who are expected to do very well this season. 330 lb. David Baas is in the final year of his contract and you can bet his play will reflect his desire for a big contract next year. Tony Wragge is a tough, solid backup.

Joe Staley is expected to improve upon his good performance of last year and former Pittsburgh Steelers vet Marvel Smith, a two-time All Pro, moves in at right tackle which should be a huge upgrade over last season. Adam Snyder is an able backup, Barry Sims is unacceptable and I expect him to be cut. The most intriguing of the backup linemen is 6'8", 328 lb. Alex Boone of Ohio State, a two-time All Big Ten performer who must overcome his weakness for alcohol. If he is able to do that, he may well be the sleeper of the season for the 49ers.

There you have it. There is plenty of reason for optimism this season and as I begin my 64th season as a fan, I simply say: Go 49ers. We will address the defense and special teams in upcoming issues.