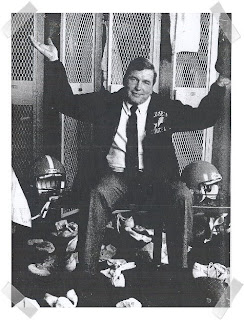 Coach Mac brought Solo to CU... but couldn't find many more like him

Greg Abbruzzese's running mate for four seasons at Columbia was the speedy Solomon Johnson, who began wowing the crowds at Wien Stadium as a Lion Cub freshman in 1987.

Johnson, or "Solo" as they called him, came to Columbia from East Orange, N.J., where he grew up the son of a football coach and starred at Montclair Kimberley Academy in football, lacrosse, basketball, and the school's jazz band.

As a frosh, he led the '87 Lion Cubs to their first-ever 6-0 season, rushing for 836 yards in those six games and scoring an amazing 16 touchdowns. His best game as a first-year was a 38-carry, 198-yard, 3-TD performance against Dartmouth.

As a sophomore on the varsity, Johnson had to split time with Abbruzzese in the backfield and they both had giant bullseyes on their backs for opposing defenses.

In a close Week 3 loss at Penn, Johnson was knocked out cold by the Penn defense as he was about to score the tying TD in the fourth quarter.

But he bounced right back the next week, helping the Lions end their 44-game losing streak with the stirring Homecoming win over Princeton.

Later in the year against Lehigh, Solo ripped off 179 yards in a loss.

Johnson finished 1988 with 707 yards rushing, which was good enough for fifth all time at Columbia at that time.

Then came the fateful 1989 season, where just a few weeks after Abbruzzese was lost for the year with a preseason injury, Johnson also had a season-ending injury.

He returned in 1990, but then Head Coach Ray Tellier was emphasizing passing by that time and he never dominated the offensive scheme again at CU.

Solo was more healed for his fifth year senior campaign of 1991, and he ended up leading the team with 522 yards rushing and a 5.0 yards-per-carry average on the year.

That season, he also became the third Columbia rusher to gain over 200 yards in one game, a 221-yard performance against Lehigh that was good for second all time in Columbia history at that point, (now third).

When I interviewed the man who recruited him, former Head Coach Larry MacElreavy, he told me if he had a few more Solomon Johnsons, Columbia would have won the championship every year.