The best college football rivalries are defined by tenure and consistency.

Alabama and Auburn’s “Iron Bowl” has been played 78 times and every single year since 1948. Georgia and Auburn have squared off even more often, 117 total games, in “The Deep South’s Oldest Rivalry.” Army and Navy have battled for the Thompson Cup in each of the past 84 seasons and 114 times since 1890. Michigan and Ohio State have played “The Game” on 110 different occasions.

“Fleeting” and “endangered” are not the types of adjectives that describe rivalries in college football. But those words accurately depict what was once—and what still should be—one of the greatest rivalries in the tradition-rich sport.

Those words portray the grim fate of Georgia versus Clemson.

“In the 1980s, Clemson vs. Georgia was the pseudo-national championship,” says Kevin Butler, one of the series' all-time greats and the only kicker to be inducted into the College Football Hall of Fame. Butler has the credentials to back that bold claim up, given his participation in four classic games against Clemson from 1981-1984.

In 1980, the year before Butler's enrollment at the University of Georgia, the Bulldogs won their first (and to date, most recent) national championship since 1942, but only after squeaking by Clemson 20-16 in a September game that proved the be their closest of the season. A year later, Clemson vaulted to 12-0 en route to a national championship of its own, beating Georgia along the way.

In 1982, Georgia survived against Clemson in the season opener and went on to play (and lose to) Penn State in the Sugar Bowl for a national championship. The Bulldog victory was Clemson’s lone defeat of the season.

Of course, it helped that the annual matchup logically appealed to the geographic epicenter of college football—the South. And the bitterness of contention was exacerbated to a staggering extent by the similarities between the two programs.

Most importantly, however, Clemson and Georgia were brought together by competition.

That context gives even more credence to a battle nearly 30 years ago that is largely considered the greatest game in the rivalry's history.

The Rivalry at Its Finest

T. Kyle King wrote the book on the storied past of Georgia and Clemson—literally. A lifelong Bulldog loyalist and college football historian, King dedicated nearly 200 pages to the rivalry in Fighting Like Cats and Dogs, which was published (in truly equitable fashion) by Clemson University Digital Press. And while King can wax poetic about traditions galore and recount games with a seemingly photographic memory, he’s surprisingly curt when identifying the best game between these two teams.

When asked which game between the Bulldogs and Tigers he'd like to go back and take his children to, he's surprisingly short-winded. “1984. Yeah. Absolutely. No doubt about it.”

King is not alone in this assessment. A 2004 poll conducted by the University of Georgia’s official athletic website revealed that fans selected the 1984 bout between the Dawgs and the Tigers as the best game ever played in Sanford Stadium, per CBS Sports.

On that particular day, Clemson came to Athens as the No. 2 team in the country. The Tigers raced out to a 20-6 lead before the Bulldogs methodically manufactured one of the program’s greatest second-half comebacks. A 60-yard field goal by Butler with 11 seconds left to play gave Georgia the upset win.

Famed sportswriter and Southern icon Lewis Grizzard was so moved by the game that he used his syndicated Atlanta Journal-Constitution column to pen a letter to the son he never had and recounted Butler’s strong-footed feat:

Only seconds were left when Georgia’s kicker, Kevin Butler, stood poised in concentration. The ball rushed toward him, and it was placed upon the tee a heartbeat before his right foot launched it heavenward.

A lifetime later, the officials threw their arms aloft. From 60 yards away, Kevin Butler had been true, and Georgia led and would win 26-23.

I hugged perfect strangers and kissed a fat lady on the mouth. Grown men wept. Lightening flashed. Thunder rolled. Stars fell, and joy swept through, fetched by a hurricane of unleashed emotions.

Grizzard concluded the letter saying, “I give this to you, son. Read it and re-read it, and keep it next to your heart. And when people want to know how you wound up with the name ‘Kevin’ let them read it, and then they will know.”

Though written with some degree of his signature jest, Grizzard’s letter was a far cry from a misrepresentation of fan sentiment.

King recalls the game so vividly that with no prodding he dives into what he calls Georgia broadcast legend Larry Munson's most famous play call from Between the Hedges. "So we'll try and kick one 100,000 miles," he begins with a feigned drawling snarl before cutting himself off.

The intense rivalry between these two teams made that game-winning moment poignant for the game’s star as well.

Without hesitation, Butler (who also won a Super Bowl with the Chicago Bears) calls the 60-yard game winner the highlight of his career. “And the fact that it came against Clemson separated it from any other kick I ever had,” he adds.

The come-from-behind Georgia win in 1984 was followed by three more classics. In 1985, Georgia won by seven points on the road. Clemson went on two win the next two contests by a combined four points.

But then a number of factors, not the least of which was speculation surrounding conference expansion for both the ACC and the SEC, contributed to the non-renewal of the yearly rivalry. And since 1987, the two once-bitter rivals have played just three home-and-home series, with this year's season opener marking the conclusion of a fourth.

After a two-season hiatus, the Bulldogs and Tigers met in 1990 and 1991. Following two more off years, they squared off again in 1994 and 1995. After that, six seasons passed without a Clemson-Georgia matchup. Consecutive games in 2002 and 2003 gave way to nine vacant years for the rivalry.

The frequency of these rivalry games is becoming increasingly rare. Georgia vs. Clemson is a casualty of conference expansion and the scheduling challenges power-conference growth has yielded.

In 1991, the ACC added Florida State to its fold and in doing so increased from eight to nine teams. Simultaneously, the SEC expanded for the first time since its founding in 1932 by adding South Carolina and Arkansas.

Combine those two modifications with pre-existing in-state but out-of-conference rivalries for both schools and the need for the rivalry—at least from the perspective of resume building—diminished. Clemson maintained a rivalry with South Carolina. Georgia continued an ongoing feud with Georgia Tech. Nothing else was needed.

The most recent waves of conference expansion have further threatened this rivalry—intermittent as it may now be. Both the ACC and the SEC are now home to fourteen teams. Both conferences hold an annual conference championship game. Each league is under pressure to feature a nine-game (instead of eight) conference schedule.

The push for an extra in-conference game isn't alway a popular one for coaches and university administrators, but as SEC commissioner Mike Slive told Ryan Black of the Ledger-Enquirer this spring, there are pros and cons to each side of the argument:

Undoubtedly one disadvantage of a nine-game conference slate is the all-but-guaranteed evaporation of rivalries like Clemson vs. Georgia. While the current college football playoff format is too new to thoroughly analyze, it hasn't added much room for error by offering just four spots for national championship contenders. Furthermore, with selection for the playoff increasingly subjective and decreasingly stat-driven, there's no immediately pressing need for added strength of schedule.

Munson had his own impact on the series.Mike Zarrilli/Getty Images

Georgia's 1990 battle with Clemson was different, King asserts in Fighting Like Cats and Dogs. The difference wasn't changed uniforms, the absence of Munson in the radio booth as he recovered from back surgery or even the unfamiliarity that comes from two years of not playing each other.

No, the most noteworthy alteration was that, for the first time in more than a quarter-century, a Clemson-Georgia game was being played with someone other than Vince Dooley standing on the Bulldog sideline and, for the first time in a dozen years, a Clemson-Georgia game was taking place with the Orange and Purple being coached by anyone besides Danny Ford.

The two head coaches defined the series in the 1980s.

In present day, King thinks two different characters, the schools' athletic directors, could affect the renewal of the rivalry.

Radakovich knows what a rivalry with Georgia means from his time at Tech.Scott Cunningham/Getty Images

Last year, Radakovich described the game as great for both Clemson and Georgia when speaking to John Taylor of NBC Sports. He added, "It'll be a wonderful atmosphere for college football."

Though Georgia AD Greg McGarity has been slow to offer any firm commitment on future scheduling, he has been aggressive in pursuing out-of-conference matchups. Most recently, the plan for a home-and-home with Notre Dame in 2017 and 2019 was announced. And as recently as last December, McGarity told Seth Emerson of the Ledger-Enquirer that there was still some scheduling flexibility in the latter part of this decade.

So there is still an opportunity for a major conference non-regular opponent to come into the fold in the future. And it's hard to imagine McGarity, who identified Clemson as a "traditional" rivalry with "a lot of merit" when speaking with Marc Weiszer of the Athens Banner-Herald (subscription required) nearly four years ago, objecting to a renewal if the schedule permitted.

The Effect of Extinction

Last year, South Carolina head coach Steve Spurrier quipped, per Mike Herndon of AL.com, in one of his classic Spurrierisms that every team Georgia plays is a rival:

"Georgia has so many rivals. It's difficult for them to have a big rivalry game every week. I think they've got as many as probably anybody in the country, with Georgia Tech, Florida, Auburn, even Vanderbilt. You can have only so many."

There's a startling degree of truth to that sentiment, and as teams have risen and fallen priorities have shifted.

Today, no win is sweeter for Georgia fans than one in Jacksonville over the Gators. After all, Florida terrorized Georgia for the better part of two decades, losing just three times between 1990 and 2010. Earlier in the 2000s, wins against Tennessee, then a perennial national championship contender, were invaluable for fans. In the 1980s, King says Auburn and Clemson took the crown.

To be sure, Georgia's hardly an outlier for its multiple rivalries or even the ebb and flow of them. But rivalries are what make college football so appealing.

For decades, polls and pundits struggled to clearly declare a national champion. The BCS system added rules and procedures for reaching such a conclusion, but even that needed refinement (as evidenced by the new playoff). College football does not survive on its finale or the legitimacy of its champions. To the contrary, the game thrives because of its week-in, week-out gridiron battles and the passion tied thereto.

Nothing exemplifies the game or amplifies those passions quite like a bitter rivalry with historic significance. And unless something changes, that may soon be extinct for Georgia and Clemson. The loss of even one potential rival diminishes the return for Bulldog and Tiger fans alike.

When toe meets leather on Saturday evening, it will be the last time these rivals square off for the foreseeable future. College football fans—not merely those with allegiance to Georgia or Clemson—should cherish the moment.

The future of the rivalry is unknown, but the past is worth remembering.

Georgia Football: Could Isaiah Wilson Land in the First Round of the NFL Draft? 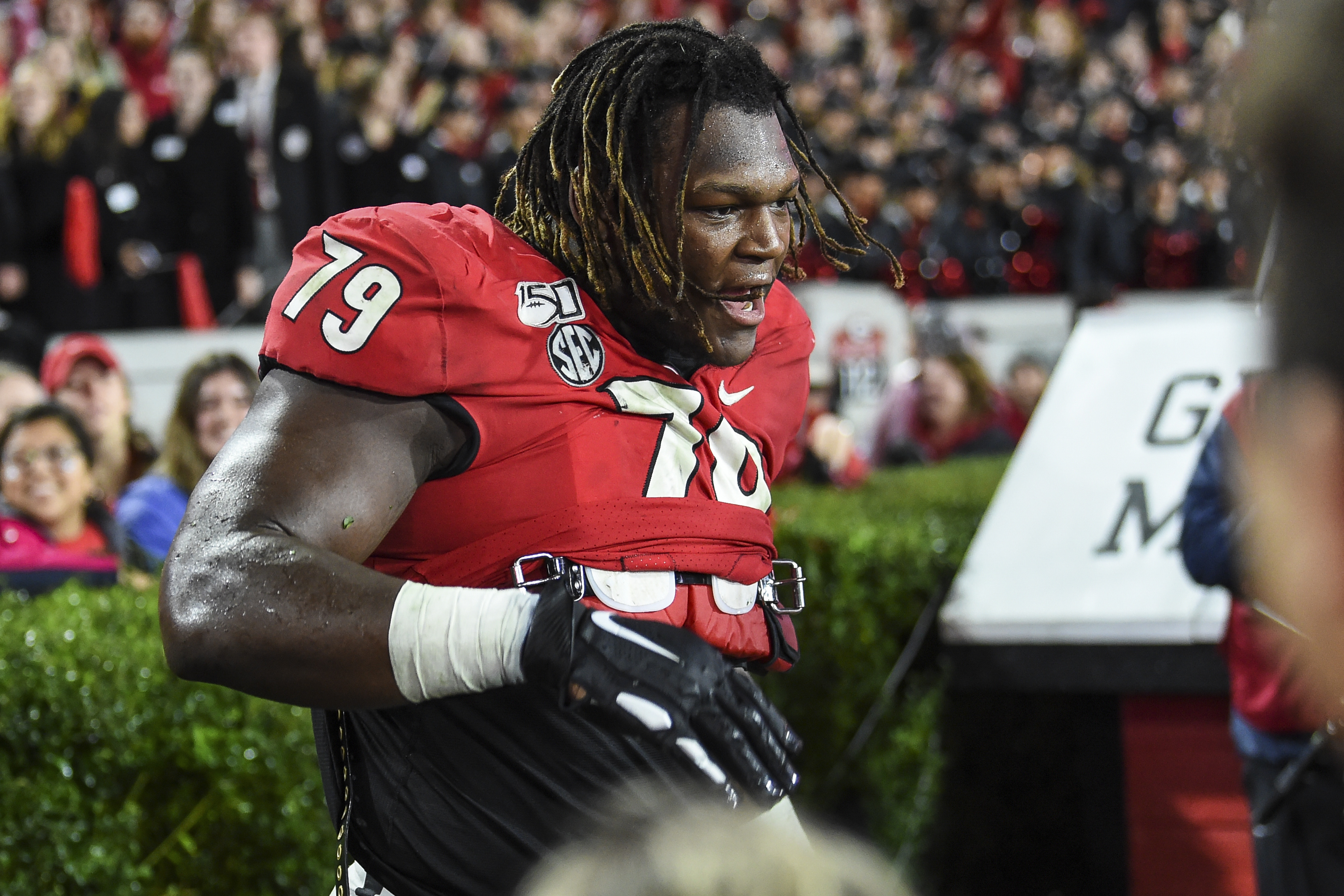 Georgia Football: Could Isaiah Wilson Land in the First Round of the NFL Draft?