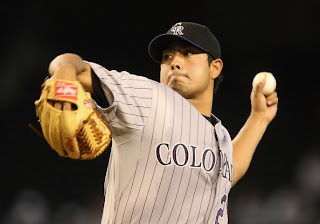 On Friday night in St. Louis, the Colorado Rockies faced a difficult task. They were playing Albert Pujols and the second-place Cardinals. To top it off, Colorado was sending struggling lefty Jorge De La Rosa to the mound to start a four-game series.

The preview for the game did not look good for the Rockies, but as the saying goes, that is why they play the game.

For his part, De La Rosa pitched six and two-thirds innings, giving up three earned runs while striking out seven and walking only two.

The big inning was highlighted by an 11-pitch at-bat that ended in a walk to Dexter Fowler, and a bases-clearing double in the gap off the bat of All-Star candidate Todd Helton. The inning was then capped off by a huge blast off the bat of Ian Stewart. It was a tape-measure shot that barely stayed inside the right-field foul pole.

While the Rockies have struggled under Jim Tracy, there has been a distinct difference with him so far. When Tracy challenges a player, that player reacts.

The first example is Garrett Atkins. Less than 24 hours after Tracy mentioned the unfathomable idea that if Atkins did not turn things around he could be shipped back to Triple-A Colorado Springs, Atkins slammed two huge home runs in Houston. It was the first time he had homered in nearly 120 at-bats.

After Atkins came Ian Stewart. The Rockies have needed Stewart to show that he is ready for everyday action in the big leagues. While showing some signs that his bat is coming around, for the most part Stewart's season has been a major disappointment.

Tracy sat Stewart down to discuss the results, and once again Stewart reacted. He hit a home run in Wednesday's loss, and had another big hit in the ninth inning to keep an ill-fated rally intact.

On Friday, Stewart's three-run dagger in the heart of the Cardinals was a sign that he is reacting well. His confidence at the plate is noticeably better, which may be the true key to his success. With his 2-for-4 night, Stewart's average now sits at .214—still far from good, but better than hovering in the .180 range.

The third warning that Tracy issued was to De La Rosa, who is often his worst enemy. Before the game, Tracy mentioned that with Franklin Morales getting close to a return, De La Rosa's spot could be in jeopardy if he did not have a quick turnaround.

De La Rosa responded with a strong outing. He gave up three runs, but the most encouraging sign came after he gave up a solo home run to Pujols, which got the Cardinals within one run.

This had been the point in the last three starts for De La Rosa where the meltdown began.

This time was different, however, as De La Rosa bore down and got out of the inning without giving up any further damage. It was a very positive sign for the Rockies.

The results in the box score have not been exactly what the Rockies have been hoping for with Tracy; the tides may be individually turning as players are clearly responding to the challenges that he is putting out there for them.

This may be the beginning of the climb back to respectability for the team.