Mitch Kupchak must go to the mattresses. If he thinks his Lakers, poised on the brink of achieving the franchise's 15th NBA championship in 30 finals' appearances, can remain as the same team in the next few seasons and continue its success, the Lakers will become victim to the same circumstances the Boston Celtics faced this year. The parity among the NBA's elite is such that there is no margin for error.

There is no ability for a team to compete if it loses the services of a key reserve, let alone a member of its starting five. The current Lakers are strong enough to win this year's finals and return for another run next year.

Provided they can sign any incumbent free agents, retain their hunger and desire, and remain healthy throughout the season and playoffs, there is no doubting that Kobe and his Lakers can win two or even three championships if they win this year.

Nevertheless, Kupchak is going to need some security for his team in order to turn this team into a champion for the next three or four years while Kobe and Pau will each still be in his prime, because these variables are a virtual impossibility to expect.

The biggest move Kupchak has made in the last two years has been the acquisition of Pau Gasol.  No one plays the game at his position like Pau.  His unselfishness meshes with Kobe's justified and mandatory need to touch the ball on every possession, and his defense is smart in that he adjusts to guarding any player on the court. 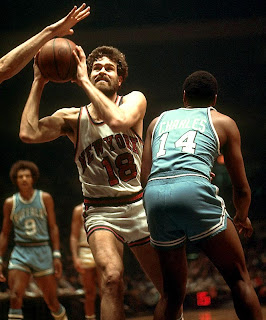 Phil loves Pau, not only because he is the reincarnation of the Zen Master himself, but also because he is the ultimate team player.   Kupchack, if he expects his Lakers to win multiple championships, must keep Pau and Kobe together.

The chemistry between these two players is undeniable and, given how difficult it has been to find players who mesh with Kobe Bryant, thus demands that Pau and Kobe, respectively, finish his career as a Laker.

Through trade routes, the Lakers players have a lot more value on the open market than they did three or four years ago when virtually the same group minus Pau were missing playoffs and being eliminated in the first round. Still, Kupchak drafted and/or signed the core of young role players and spent patient time hoping Phil Jackson could develop them into the key pieces of a championship team.

Why bother trading Luke Walton, Jordan Farmar or Sasha Vujacic if they prove capable of holding a bench together and winning it all, when these types of players are exactly the types of young players teams need in order to achieve such a feat?  The rise of Shannon Brown, Trevor Ariza and Andrew Bynum means that the future is looking bright for the Lakers. 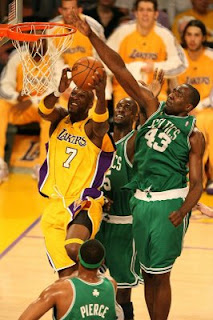 As bright as the future may be, the present fire needs fueling. The fuel this team needs must be that of a substance more permanent than temporary.   Lamar Odom's position has already been given up to the more active Trevor Ariza, who won't score consistently, but will run the floor, defend, and give the team a consistent effort every game.

As mentioned, the addition of Pau Gasol, not Odom, has been the key factor in the Lakers' success of late.  Lamar Odom is not one of the necessary pieces for this team to succeed, after this year (provided the team wins it all).

In biology, fuels like candy provide a human being with a temporary boost followed by a crash.  Odom may be fueled by winning a championship now, but rewarding him with a large contract and expecting the same intensity from him in the future is a mistake Kupchak should not make.

The Lakers can make trades and acquire more help here and there, but the route Kupchak must take is to find Kobe his true "Pippen." Considering that the current Los Angeles team has sneakily built a team remarkably similar to the 95-96 Bulls, they are still one piece away from attaining immortality for years to come.

Compare Michael Jordan to Kobe Bryant, Toni Kukoc to Pau Gasol, whatever Luc Longley/Dennis Rodman could bring to what Andrew Bynum provides, and finally Steve Kerr/Ron Harper/ Jud Buechler to Derrick Fisher/ Luke Walton/ Sasha Vujacic, and you will find that the final piece to a record setting season lies in the position of small forward, where one of the NBA's greats in Scottie Pippen overpowers the inconsistent play of one Lamar Odom. 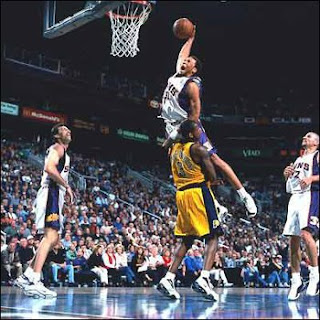 The objective for Kupchak, then, is to find the player most like Pippen in the league, a player who can play the roaming defender, get in the passing lanes, create off the dribble, shoot the three, rebound the basketball, block shots, shoot the mid range shot, demand a double team, run the floor, and dunk from the free throw line and, perhaps most importantly, have a burning desire to win.

The demise of the Phoenix Suns was when they traded this player. Kupchak must do everything in his power to sign Shawn Marion this summer, even at the cost of having nothing left to sign Lamar Odom.

What this allows Los Angeles to do is to have the most versatile starting five in the NBA. With Kobe Bryant, Pau Gasol, Andrew Bynum and Shawn Marion on the court, much like the 72 win Chicago Bulls of 95-96, Jackson only needs a point guard capable of dribbling, defending, shooting the occasional open three, and being smart enough to deposit the ball into the hands of those better players when they are in position to start the triangle offense.

Marion is at a perfect stage in his life and career (only 31 years old), during which he will do anything to win a championship. His only problem in the past has been the inability to defer the spotlight to other players on the team. But with Kobe Bryant on his team, he'd gladly trade the spotlight for comparisons to the now hall-of-fame Pippen, the glory of the Lakers, and a shiny golden trophy to hug.

@Jonwass ranks the top 50 prospects ahead of Tuesday's lottery ➡️

Trades Every Lottery Team Should Consider 🧐

The one move each organization should make if they win the No. 1 pick

Trades Every Lottery Team Should Consider 🧐