If you tuned into tonight's matchup between the "University of Maryland Under Armours" and the "The U Scandals," you were likely interested in seeing how the suspension-plagued Miami Hurricane's team would respond on the field in the face of recent off-field distractions and without starting quarterback Jacory Harris in the wake of college football's biggest scandal, also known as the Nevin Shapiro story.

If you watched the entire game, you saw one of the opening weekend's better match ups, which Randy Edsall's Maryland Terrapins won 32 - 24 in a rain drenched contest highlighted by superb quarterback play from Maryland's Danny O'Brien and Miami's Stephen Morris.

However, the subplot that seems to have over shadowed this game since the home team took the field is the outrageous, Maryland flag-inspired, Oregon Duck-envy fueled uniforms being worn by the home field Terrapins.

Recently, teams such as Virginia Tech and South Carolina have worn gimmick uniforms to salute our nation's armed forces and others like TCU, Boise State and the Georgia Bulldogs have thrown a wrinkle or two into their old looks with new color schemes and designs, but I must say, I have never seen anything like this on the college football field.

Maryland, as Under Armour founder and CEO Kevin Plank's alma mater, is in the funky and futuristic looking uniform business for the long haul, as is the University of Oregon with alumnus Phil Knight's Nike doing the Ducks' stitching and design work.

The question is, how soon will we see the college football uniforms we have to come to know and love fade away as a relic of the past while Nike and Under Armour stage a battle of one-upmanship in a race to create the uniforms that will become part of the new landscape in collegiate sports?

How long until we see an actual Nittany Lion's head on the Penn State helmets ala the Boise State "Nike Pro-Combat" alternate-uni Bronco's?

Or, if we are going with state flag insignias, is it only a matter of time until the breast-exposed She-Warrior from the Commonwealth of Virginia's Sic Semper Tyrannis flag adorns the Hokies' chests on game day in Blacksburg, striking fear into the hearts of Latin-reading opponents with her promise of "Death to Tyrants"?

In all fairness to MTV as the pop culture conduit that brought Lady Gaga's meat dress into millions of living rooms and forever changed the way we thought about wearing animals as clothing, though, ESPN hit the jackpot tonight with Uniform Heard Round the World.

It is not a stretch at all to suggest the Terps' new unis just may be the tipping point that changes the way we view, if not the way we look at, college football for the next decade or more.

Back with the Squad: Reuniting the 2002 Maryland football team 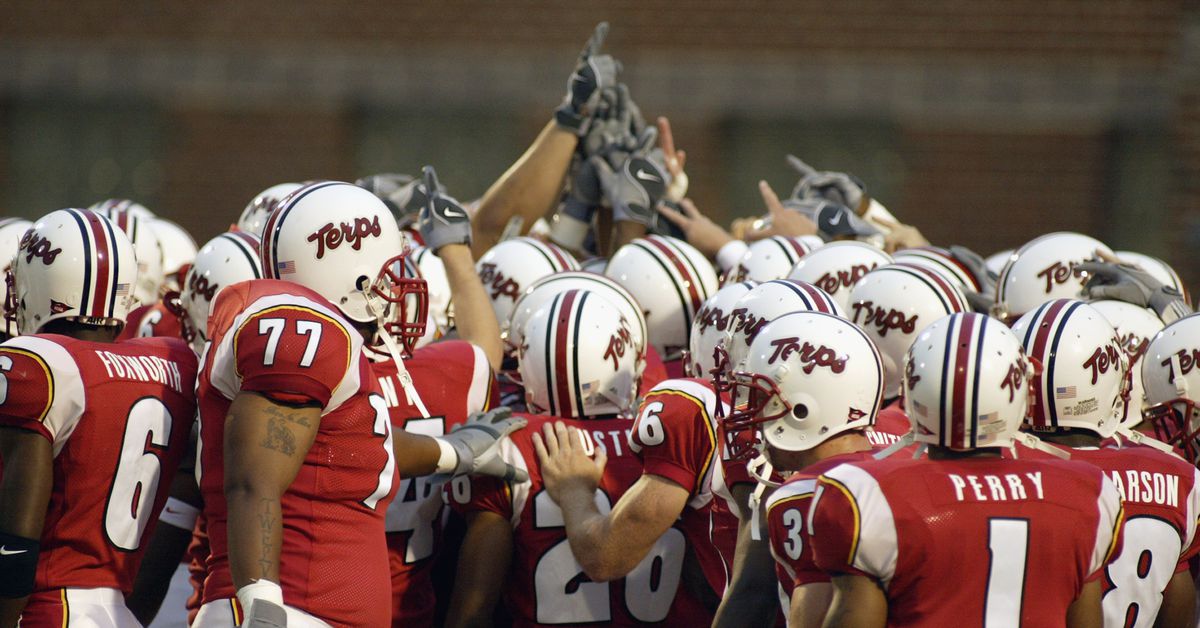 Back with the Squad: Reuniting the 2002 Maryland football team