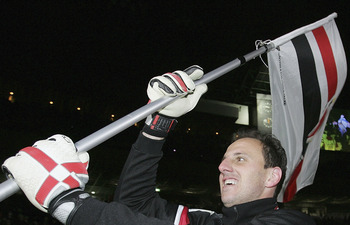 The root word in defenders is defend; and in football, defend means protecting one's goal.

But the likes of Daniel Passarella and Ronald Koeman defied these conventions. Even goalkeepers like Jorge Campos and René Higuita attempted to score goals. 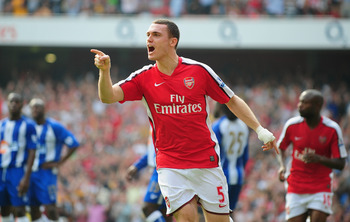 Developed by the famed Ajax youth academy, perhaps one should have expected Thomas Vermaelen to be competent in attack, even as a centre back.

Though when Arsène Wenger bought Vermaelen from Ajax for €10 million, the question many people had was how could someone in the English Premier League dominate at 1.78m at the back?

Vermaelen not only proved his doubters wrong with consistent solid defense, he wowed them with his ability to score goals, and he became another case of Arsenal’s scouting program bearing fruit.

He’s so at ease with possession that one could argue that he is the prototypical centre midfielder. 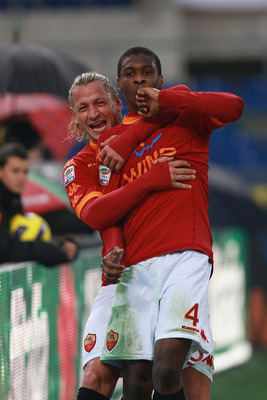 A long-serving member of the Seleção and perhaps one of the least known given Brazil’s propensity for samba football, Juan does not receive enough recognition.

Having scored 44 goals, Juan has demonstrated his ability to score from time to time. 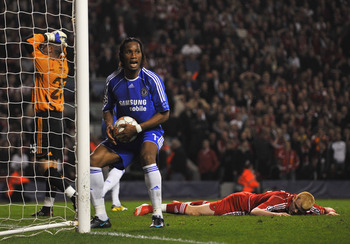 “Goodness gracious me… well it’s amazing the goal is still standing, the ball rocketed into it”.

That was Martin Tyler’s commentary of John Arne Riise’s cannon free kick against Manchester United in 2001.

Throughout his Liverpool career, Riise had a knack of scoring spectacular goals.

However, his only goal during the 2007-2008 season, a 94th-minute own goal against Chelsea during the UEFA Champions League semifinals, left an unfortunate footnote during his time at Anfield. 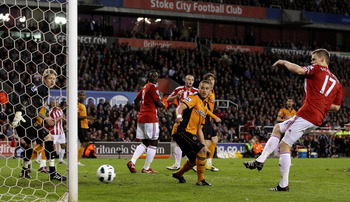 Ryan Shawcross’ career so far has been blighted by his X-rated tackle on Aaron Ramsey.

While Ramsey spent the next seven months nursing a broken leg, Shawcross suffered a public relations melt down, as his critics pointed to similar tackles against Francis Jeffers and Emmanuel Adebayor.

The jury is out on whether or not Shawcross is indeed a malicious player or just a fearless defender who mistimed a tackle.

That being said, there’s no doubting his ability to score goals under manager Tony Pulis’ pragmatic and set piece-orientated tactics. 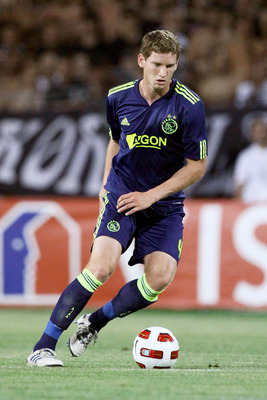 A player seemingly tailor made for Arsène Wenger, Jan Vertonghen not only possesses the technical ability but also the physical ability to survive in the English Premier League.

Confident, strong and solid in distributing, Vertonghen is another example of how proficient the Ajax youth academy is in producing in professional footballers.

Like his Belgian compatriot Thomas Vermaelen, Vertonghen has an eye for scoring goals. 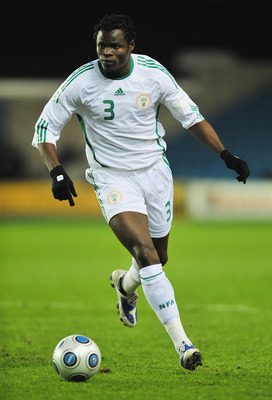 Taye Taiwo’s lively displays during the U-20 2005 FIFA World Cup earmarked him as a potential star.

Six years on, he’s worked his way into an A.C. Milan team that has dynasty written all over it.

While he may disregard his duties as a defender, his attack-first attitude coupled with power that would rival Tino Costa, has seen him on the scoresheet throughout his career.

A.C. Milan will be hoping for more goals from Taiwo. 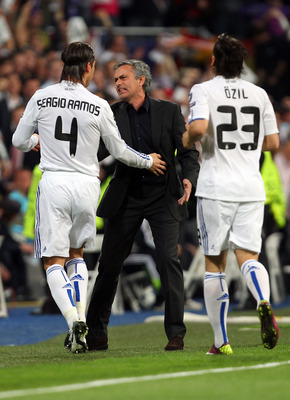 Sergio Ramos' willingness to get on the scoresheets was best documented when he oddly decided to take a penalty against Athletic Bilbao last year.

Manager José Mourinho was caught on the cameras stating, “Why? Why has he taken it?”

Ramos told AS, “On the pitch everyone was surprised. There's usually an order, but I was confident and had a thorn in my side because I hadn't scored and normally I have a decent goal average”. 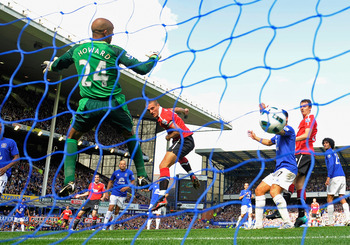 Plucked from obscurity, Nemanja Vidić has developed into one of the best centre backs in the world. 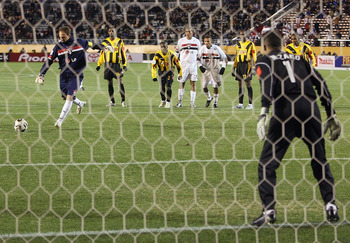 The only goalkeeper on the list, Rogério Ceni has long bypassed his South American goalkeeping counterparts, José Chilavert and René Higuita, as the most prolific goal-scoring goalkeeper.

Ceni’s perseverance in perfecting the art of free kicks and penalty kicks has seen him cement his name in history.

Unfortunately, even with his goal-scoring ability, he has only been a reserve goalkeeper for the Brazilian national team.

Though what is Brazil’s loss is São Paulo’s gain, as Ceni approaches 1,000 games and almost two decades of service for the Brazilian club. 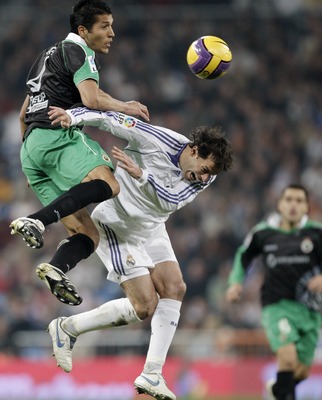 For a player who looked so solid, so confident and such a prospect for Racing Santander, Ezequiel Garay is only a bench-warmer for Real Madrid.

During the 2006-07 season, he did his best impression of Ronald Koemen, scoring 9 goals in 32 games, the majority coming on penalty shots. 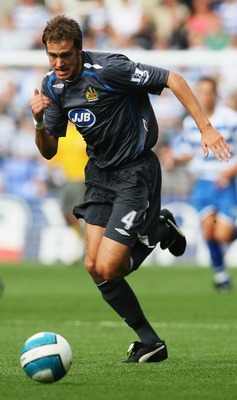 With players like Andreas Granqvist, one wonders whether they’re better suited as a forward rather than as centre back.

Denied an opportunity to show his attacking flair at Wigan, Granqvist has blossomed at Groningen.

Groningen manager Pieter Huistra must have had his heart in his mouth every time Granqvist decided to charge up forward.

His 11 goals in 33 games this season is a return rate even Emile Heskey would dream of.

Perhaps Granqvist’s 65m solo run against Utrecht epitomises his mentality as an attacking centre back.

Having earned a move to Genoa, can he possibly play like this in an environment which promotes defence over attack such as the Serie A? 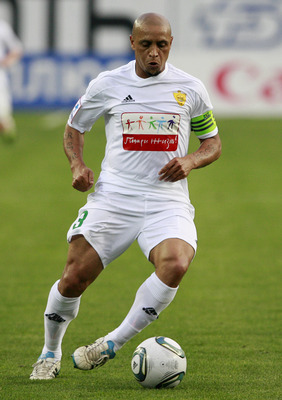 What? Roberto Carlos is still playing?

Carlos’ constant attacking forays into the opposing half from left back, coupled by his at times physics-defying free kicks, have inspired legions of attacking full backs.

Even though he has aged, his eye for goal has not diminished, evidenced by his score on a corner kick last year for Corinthians. 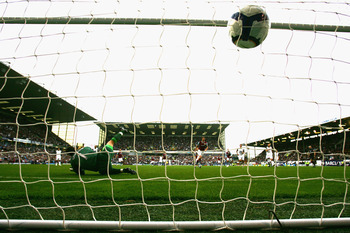 Talk about a real iron man: Graham Alexander has played 40 games or more in a season 16 times.

The majority of his goals have come from 12 yards out, and having scored 74 penalties out 80 attempts (92.5% success rate), one can understand why he will continue to accumulate goals every season. 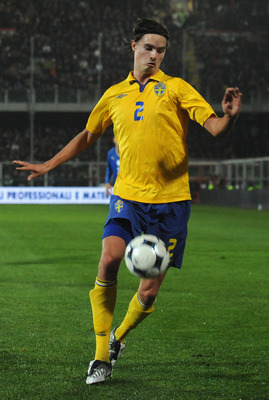 One of the first things noticeable about Mikael Lustig is his height—for a right back, he has the height of a centre back.

You also notice his attacking prowess and his willingness to impact the game from an offensive point of view for Rosenborg.

At just 24 years of age, he seems poised for a move to a bigger club. 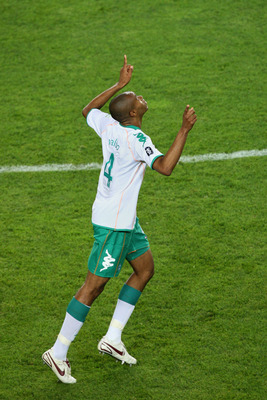 Recuperating from knee surgery, this season Werder Bremen were not only denied Naldo’s goal-scoring expertise, they also leaked 61 goals in 34 games without the presence of the reliable Brazilian.

Eurosport reported Naldo stating, “I am not considering a worst-case scenario at all, that it could end my career”.

Werder Bremen will be hoping for the best-case scenario. 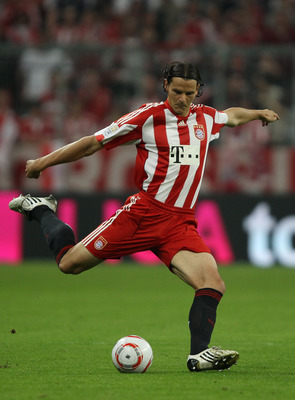 Daniel Van Buyten commands a presence at the back, yet he’s also a frequent presence in the opposing penalty box.

Such was his ability to score goals, he was even deployed as an emergency forward for Bayern Munich.

Having scored 9 goals the previous season, he only scored 2 goals this season—his lowest return in six seasons.

Never in my life have I ever seen a centre back be so kamikaze-like in disregarding his duties as a defender.

Tomoaki Makino not only bolts into opposing penalty boxes, he can also strike a thunderous free kick.

With that said, it was perplexing as to why Köln, who have the third-worst defence in the Bundesliga, bought Makino. 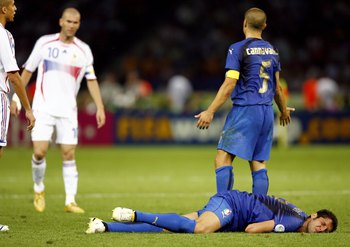 When you think about it, there are a lot of similarities between Marco Materazzi and Zinedine Zidane: Both are hot heads, both have done stupid things during their careers, both are imposing figures, both are alpha males and both have scored in FIFA World Cup finals.

Materazzi is an interesting case. He’s not quick by any means, nor is he Zidane-like with his technique. Yet throughout his career, he’s been able to score goals.

During the 2000–01 season, Materazzi scored an outlandish 12 goals for the season— Alessandro Del Piero scored nine goals during that season. 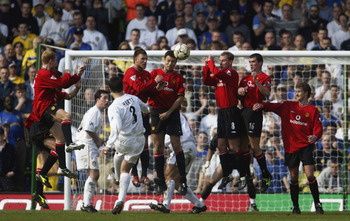 There is something unique about free kicks being taken by left-footers; you know, a certain elegance, seemingly a more radical trajectory and more potency.

Even though Harte hasn’t played regular top-flight football since the 2004–05 season for Levante in La Liga, Harte’s scoring feats in the lower leagues of England have been ridiculous. 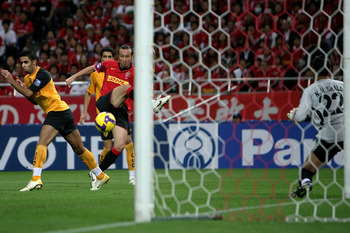 Like Tomoaki Makino, Marcus Tulio Tanaka is kamikaze-like when it comes to dashing from his own penalty box to the opposition's.

However, Tanaka is a superior defender and scores more goals.

Perhaps it’s fitting that the top goal-scoring defender in the world is Brazilian-born, certainly he has Romario-esque finishing when he’s inside the box.