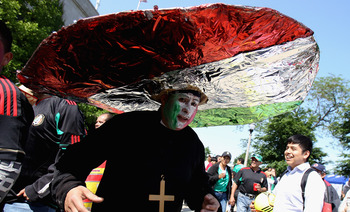 This weekend the CONCACAF Gold Cup quarterfinals will go down in East Rutherford, New Jersey and Washington DC.

The eight remaining teams ostensibly represent the best that North and Central America and the Caribbean Islands have to offer.

On Saturday, Costa Rica takes on 2010 World Cup participant Honduras and the mighty Aztecs of Mexico face-off against their southern neighbors from Guatemala.

On Sunday, a demoralized United States faces a feisty Jamaican side and everyone’s second favorite team in the tournament, Panama, takes on a shaky El Salvador.

The United States and Mexico traditionally dominate this tournament, but between Mexico’s doping scandal and Bob Bradley’s calamitous loss of control, anything is possible.

Here are your power rankings for the teams remaining in the tournament. 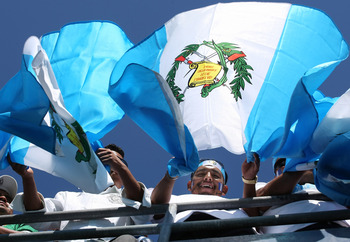 The Skinny: Guatemala is the worst team left in the 2011 Gold Cup. Knowing my luck, they’ll trounce Mexico and make me eat my words.

Oh well. As of now, La Azul y Blanco has only one victory to its credit. That victory came against Grenada, a team that allowed 15 goals in three group stage matches.

The four goals scored in that game are the only goals managed by Guatemala thus far. The team played to a stupendously boring 0-0 draw against Honduras and lost to Jamaica 2-0.

What we can learn from all of this is that Guatemala has a weak, uninspired offense and a back line incapable of dealing with pacey, creative strikers.

In the quarterfinals, Guatemala takes on Mexico. No one on La Azul y Blanco has what it takes to manage Chicharito, Giovani dos Santos, Andre Guardado or Aldo de Negris. What’s more, none of Guatemala’s forwards have the minerals required to break through Rafael Marquez and El Tricolor’s back line.

Expect a massacre in East Rutherford this Saturday—and bad blood on the Guatemala/Mexico border for a few days thereafter. 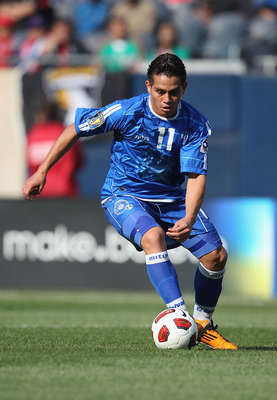 The Skinny: It’s hard to know where to begin with El Salvador.

Like every other team in Group A, La Selecta thumped Cuba. Despite the 6-1 score line, El Salvador holds the ignominious distinction of being the only team to allow Cuba a goal.

Elsewhere, the Salvadorians lost 5-0 to Mexico, allowing a hat trick from Chicharito, and tied Costa Rica 1-1. Though striker Rodolfo Zelaya has played well, the rest of the team has been inconsistent and uninspired on the pitch.

It’s a little difficult assessing the better team between El Salvador and Costa Rica, largely because they tied one another and had very similar score lines against Mexico and Cuba.

Ultimately, El Salvador enters the Gold Cup power rankings beneath Costa Rica because they failed to score against Mexico and allowed Cuba to goal. The also face the superior Panama in the quarterfinals. 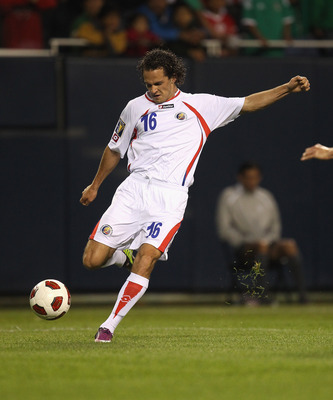 The Skinny: It’s hard to know which Costa Rica will show up on the day—the one that destroyed Cuba, 5-0, or the one that was trounced by Mexico, 4-1.

Because of this, Costa Rica sits relatively low in the power ratings, despite some impressive play in the group stage. In between its soaring win and its crushing defeat, Le Sele managed a 1-1 draw to El Salvador.

Costa Rica possesses some offensive panache on the pitch, but the team is too inconsistent, and its defense too leaky, to be a sure bet. Despite the team's record of six goals in three matches, only striker Marco Ureña has more than one goal.

For its inconsistency and poor defensive play against Mexico and El Salvador, Costa Rica falls at six in the Gold Cup quarterfinal power ratings. 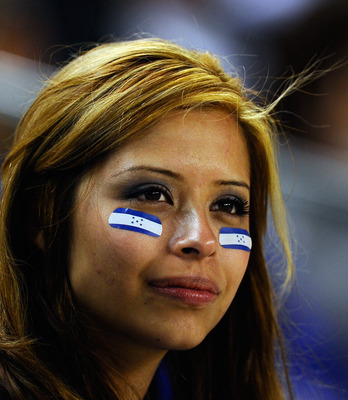 The Skinny: If Honduras had managed to overcome Guatemala rather than succumb to a draw, the team would be much higher on this list.

Unfortunately for Los Catrachos and their supporters, the side displayed markedly frustrating form in the group stages.

Honduras ripped Grenada a proverbial new one. The match, which ended 7-1, saw a hat trick from Carlo Costly and goals from Jerry Bengston, Walter Martinez and Alfredo Mejia.

Next came the 1-0 loss to Jamaica, Honduras’ last match of the group phase. Heading into the quarterfinals, Los Catrachos prepare to face Costa Rica.

It’s hard to know which of these teams has the advantage because their groups were very different and their play inconsistent. Honduras ultimately has the better defense, which gives them an edge. 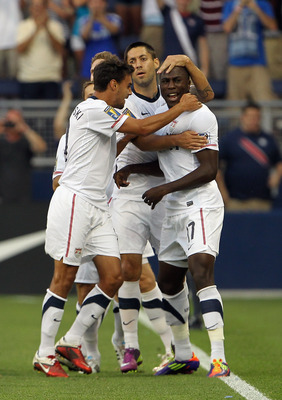 The Skinny: The United States has been the most disappointing team thus far in the Gold Cup tournament.

Though the Stars and Stripes managed to cobble together two wins, one of them was a very unconvincing 1-0 victory over Guadalupe in which Jozy Altidore got very lucky within 10 minutes. After that, it was 80 minutes of amateur football.

The US started the tournament with a decent performance in a 2-0 win over Canada. Both Altidore and Clint Dempsey scored.

Then the histrionics started. First, the US fell in spectacular fashion to a surprisingly good Panama, thanks in part to an own-goal from Clarence Goodson. Then, the Guadelupe match.

Of course, all of this should come as no real surprise after Spain thrashed the United States, 4-0, in a recent friendly.  Sure, Spain is the best national team in the world, but that performance was abject.

Between Dempsey, Tim Howard, Altidore, Landon Donavan and Jonathan Spector, the Stars and Stripes have the goods to make it to the finals.

Unfortunately, terrible performances from the likes of Tim Ream, and uncertain finishing from Juan Agudelo and others, have spelled trouble for the US.

If the team continues its current run of form, the United States doesn’t stand a chance against Jamaica. 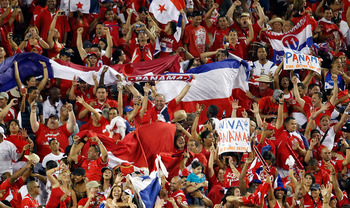 The Skinny: Panama made it through the group stage without a loss, much to the surprise of many non-Panamanians around the world.

Panama enters the quarterfinals on the heels of a draw against Canada, which the team secured in the first minute of stoppage time thanks to Luis Tejada, who has two goals in the tournament.

Despite the draw, Panama displayed very good form in the group stages. La Marea Roja came out of the gate an exciting 3-2 over the abject Guadelupe.

Panama continued with a surprise upset of the United States, during which US defender Clarence Goodson scored two goals, one for the Stars and Strips and one for Los Canaleros. To wrap up the match, Panama’s Garbiel Gomez scored from a penalty.

Ultimately, Panama has been good, if not stellar, but the overall level of play in the tournament has been incredibly uneven. Because of this, La Marea Roja ranks third. 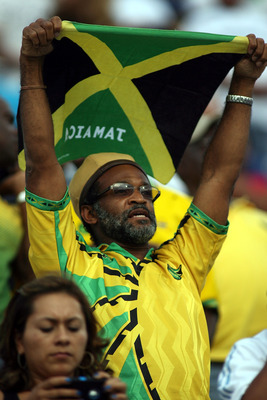 The Skinny: Jamaica was the breakout star of Group B, where they notched three consecutive wins.

Philips went on to score a brace in a 2-0 victory over Guatemala, while Johnson found the back of the net once more in the team’s 1-0 victory over Honduras.

Now, given the shambolic state of the US team and the fantastic form displayed by Jamaica, the Stars and Stripes don’t seem to stand much of a chance. Jamaica has a quick forward game and a strong defense; the United States has a terrible defense and an uneven attacking presence.

Expect Jamaica to make it all the way to the finals. 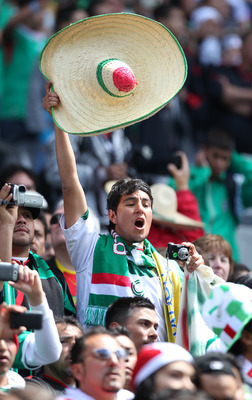 The Skinny: Mexico completely dominated its opponents in the group stage of the tournament.

The Aztecs took down both El Salvador and Cuba 5-0, and they dismantled Costa Rica—a team many thought could challenge El Tricolor—to the tune of 4-1.

Javier Hernandez is the tournament’s high scorer, with five goals thus far. Forward Giovani dos Santos and midfielder Andres Guardado have a brace apiece, and third striker Aldo de Nigris has found the back of the net on two separate occasions.

Despite the loss of goalkeeper Memo Ochoa and center back Francisco Rodriguez before the Cuba match, Mexico’s back line held strong against both Cuba and Costa Rica. Attribute this, in large part, to the steady hand of Rafael Marquez.

Though down to a 17-man squad, thanks to the doping troubles, it’s hard to see Mexico losing in the quarterfinals—or to either team it might face in the semifinals.