Oakland Raiders: 10 Raiders Who Could Make the 2012 Pro Bowl (With Odds) 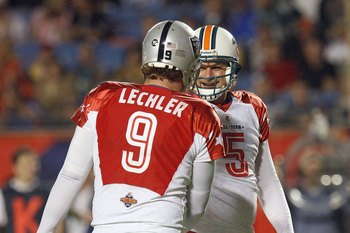 Shane Lechler is a shoe-in for Hawaii assiming the Raiders can convince him to stay.Scott Halleran/Getty Images

Every season in the NFL, certain players emerge from nowhere to become Pro Bowl players. They come from good teams and bad, big-market teams and small-market.

Unfortunately, Pro Bowlers haven't been coming from the Oakland Raiders as frequently as they have in the past. Last year was the first time in a long time that a Raider player not named Shane Lechler or Nnamdi Asomugha made the Pro Bowl, when Richard Seymour and Zach Miller made the trip to Hawaii.

This year, the Raiders have a lot of free agents—25 to be precise.

Some of these men will be re-signed. Some will be let go and will make room for other players to have a shot at stardom.

What are the odds that Oakland can put more than the usual suspects into the Pro Bowl? Who are the previously unheralded players that have their best chance at making the Pro Bowl in years?

Let's take a look at a few of the players on the Raiders that can break out in the 2011 NFL season and their odds of earning a trip to Hawaii... 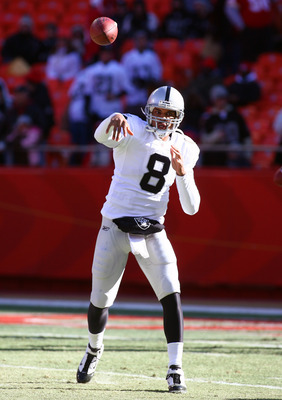 Jason Campbell has his best opportunity to be successful in his career.Tim Umphrey/Getty Images

Jason Campbell is the unquestioned starting quarterback in Oakland. He will remain in the same basic offensive system two years in a row for the first time since he was in high school.

Hue Jackson's system and play-calling will remain in place and give Campbell a legitimate shot at the quintessential breakout year.

All that said, it's going to be nearly impossible for him to make a Pro Bowl when you consider that Peyton Manning, Tom Brady and Philip Rivers are still playing.

Even if one of the aforementioned players fails to make the Pro Bowl, players like Matt Schaub are still lurking near the top. 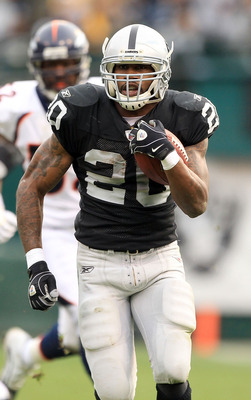 Darren McFadden will be looking to back up his stellar 2010 season.Ezra Shaw/Getty Images

Darren McFadden finally put together a complete year, a year in which he was fourth in total yards from scrimmage.

The Raiders have improved the talent along the offensive line, and the second-best rushing attack could be even better than it was last season.

McFadden should be able to not only back up his solid 2010 season, but has the potential to have a monster year.

With the improvement on the line and a legitimate starting quarterback, teams will have to respect the pass, allowing McFadden even more room between the tackles.

There is tough competition in the AFC at running back with Jamaal Charles, Chris Johnson and Arian Foster, but McFadden has just as good a chance as any other back. 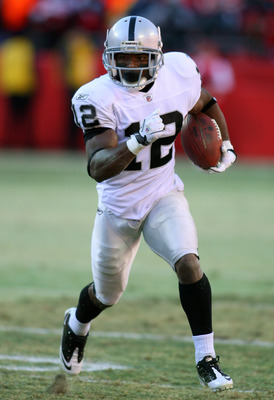 Jacoby Ford is likely to be a double threat in 2011, just like he was in 2010.Tim Umphrey/Getty Images

Jacoby Ford had a great rookie year in 2010, becoming a real threat in the return game and showing tremendous will and heart to fight for the ball.

The bad news for Ford is that Josh Cribbs is still returning kicks and Wes Welker, Andre Johnson, Vincent Jackson and surprise Pro Bowler Brandon Lloyd are all still in the conference. 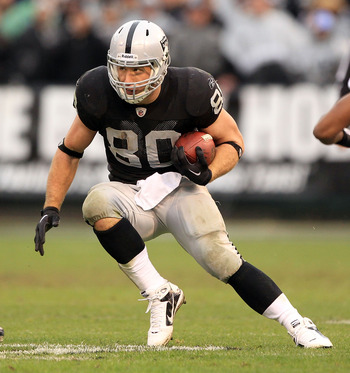 Zach Miller made it to the 2011 Pro Bowl as a coach's pick.Ezra Shaw/Getty Images

Despite making the Pro Bowl as an alternate after last season, Zach Miller may still be the most underrated tight end in the league.

Assuming Al Davis can make Miller an offer he can't refuse, Miller will have another year with quarterback Jason Campbell to get their chemistry going.

If everything goes right, earning All-Star honors will still be tough for Miller. Antonio Gates, Owen Daniels and rookie sensation Tony Moeaki are all more recognizable names and all are in the AFC.

Richard Seymour has a great shot at returning to the Pro Bowl.Ezra Shaw/Getty Images

After the 2010 season, Richard Seymour was elected to the Pro Bowl. That was his fifth trip to Hawaii, his first as a Raider.

The 4-3 defense is becoming more and more rare in the NFL, so a 4-3 defensive tackle is at a disadvantage when it comes to earning All-Star status.

Seymour plowed through that disadvantage in 2010 and made it to Hawaii anyway.

And 2011 has the potential to be even better for Seymour and the Raiders defense. New coordinator Chuck Bresnahan plays a much more aggressive style than his predecessor, John Marshall.

This should translate into more tackles, more sacks and more turnovers for everyone on the Raider defense. 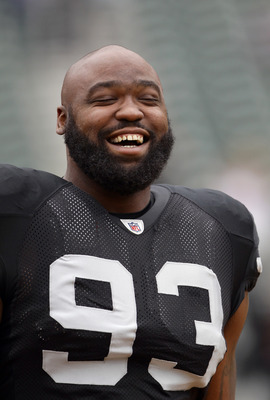 Tommy Kelly is one of many underrated players on the Raiders defense.

Kelly is among the top five in tackles and sacks league-wide at his position nearly every year.

Why? Who knows. Too many haters in the media? Just saying.

Unfortunately, Kelly plays next to one of the best defensive tackles in the league, who has great name recognition. This will make it more difficult for Kelly to gain enough votes to make it to Hawaii.

Kelly will have to have an enormous year to earn enough recognition to make a Pro Bowl.

It won't be an easy task considering Haloti Ngata and Vince Wilfork are more well known and still playing in the AFC. 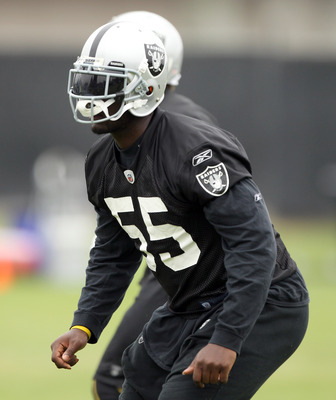 Rolando McClain had a solid rookie year, but still has a lot to learn.Ezra Shaw/Getty Images

Rolando McClain entered the league as the eighth overall pick in the 2010 draft to a lot of high expectations.

For the most part, McClain lived up to those expectations, but he didn't really exceed them. He wasn't flashy or dominating, but he was more than solid—he was good.

Another year playing in the unfamiliar 4-3 defense should make him more comfortable, allowing him to react more than think on the field.

If new linebacker coach Greg Biekert can have the effect most in Raider Nation think he will, Oakland fans should be in for a treat with an extremely explosive, big-time season from this second-year player.

A Pro Bowl berth? Probably not with players like Ray Lewis and Jerod Mayo playing the same position in the conference. 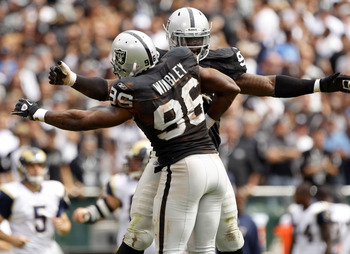 The Raiders' leader in sacks in 2010 was Kamerion Wimbley from the outside linebacker spot. But he did more to help the Raiders than sacking the quarterback.

Along with the aforementioned Seymour, Wimbley had a profound effect on the overall toughness of the Raider defense.

Assuming he can grow and learn even more from Biekert and Bresnahan, Wimbley has a good shot to be even more impactful for the Raiders and earn himself a trip to Hawaii.

Getting to the Pro Bowl won't be easy with names like James Harrison, Lamar Woodley, Terrell Suggs and Cameron Wake playing his position in the AFC. 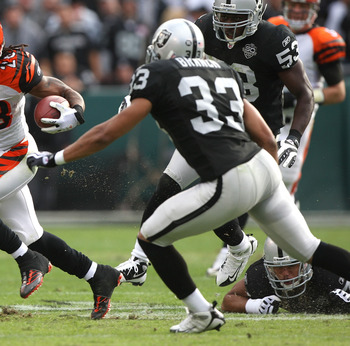 Tyvon Branch has been up and down for the Raiders.Jed Jacobsohn/Getty Images

The first thing Tyvon Branch needs to do to earn a Pro Bowl berth is get better in coverage. No one is criticizing his speed, athleticism or tackling, but Branch has looked bad in coverage at times—real bad.

Next, Branch will need to re-win the starting strong safety job. He'll have to outplay the young Mike Mitchell. Mitchell is sure to be even better than last year, and if Branch isn't, he could lose his spot in the starting 11.

If that's not enough to overcome, Branch will be competing with guys like Ed Reed and rookie sensation Eric Berry.

New safeties coach Kevin Ross will improve Branch's play, but I don't know if he can help Tyvon enough to make it to Hawaii. 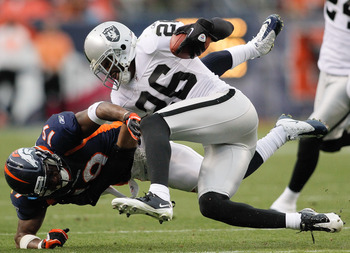 Stanford Routt made huge strides in his game in the 2010 NFL season.Justin Edmonds/Getty Images

Other than maybe JaMarcus Russell, Stanford Routt was perhaps the most ridiculed player by Raider Nation over the last few seasons.

However, with the improvement he showed over the course of last season, Routt has managed to prove a lot of those naysayers wrong—including this writer!

Routt still showed some inconsistency last year, providing great coverage one moment and blowing his assignment and giving up an easy touchdown the next.

He'll need to improve his tackling and run support, but Routt is poised to make Raider fans forget about all-world player Nnamdi Asomugha.

Okay, maybe not, but if Asomugha does indeed leave to free agency, Routt has shown that he has to ability to fill in nicely.

Being coached by Woodson, along with a better overall defensive scheme provided by Bresnahan, will only serve to help this player-on-the-verge excel and give Raider Nation something to cheer about in 2011. 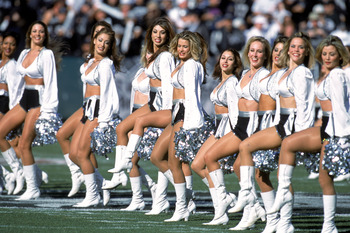 The best, most beautiful cheerleaders in the business.Tom Hauck/Getty Images

Let me clarify something. I don't believe that any one of these players will definitely make the Pro Bowl. Of course, some have a better shot than others.

It seems to me that Darren McFadden, Richard Seymour and Stanford Routt have the best opportunity of all these players. (Assuming the offense continues to run the ball well, the defense improves under Bresnahan and Asomugha leaves for "greener" pastures.)

Whether the Raiders have no Pro Bowlers or 10, this lifelong Raider fan is very optimistic about the upcoming NFL season—if there is one.

So, what do you think? Who did I forget? Who shouldn't be on this list? What Raider player, (or players) do you feel have the "commitment to excellence" and the best chance of making it to Hawaii?

Let me know in the comments.