Kurt Busch and the 20 Biggest Jerks in Motorsports History 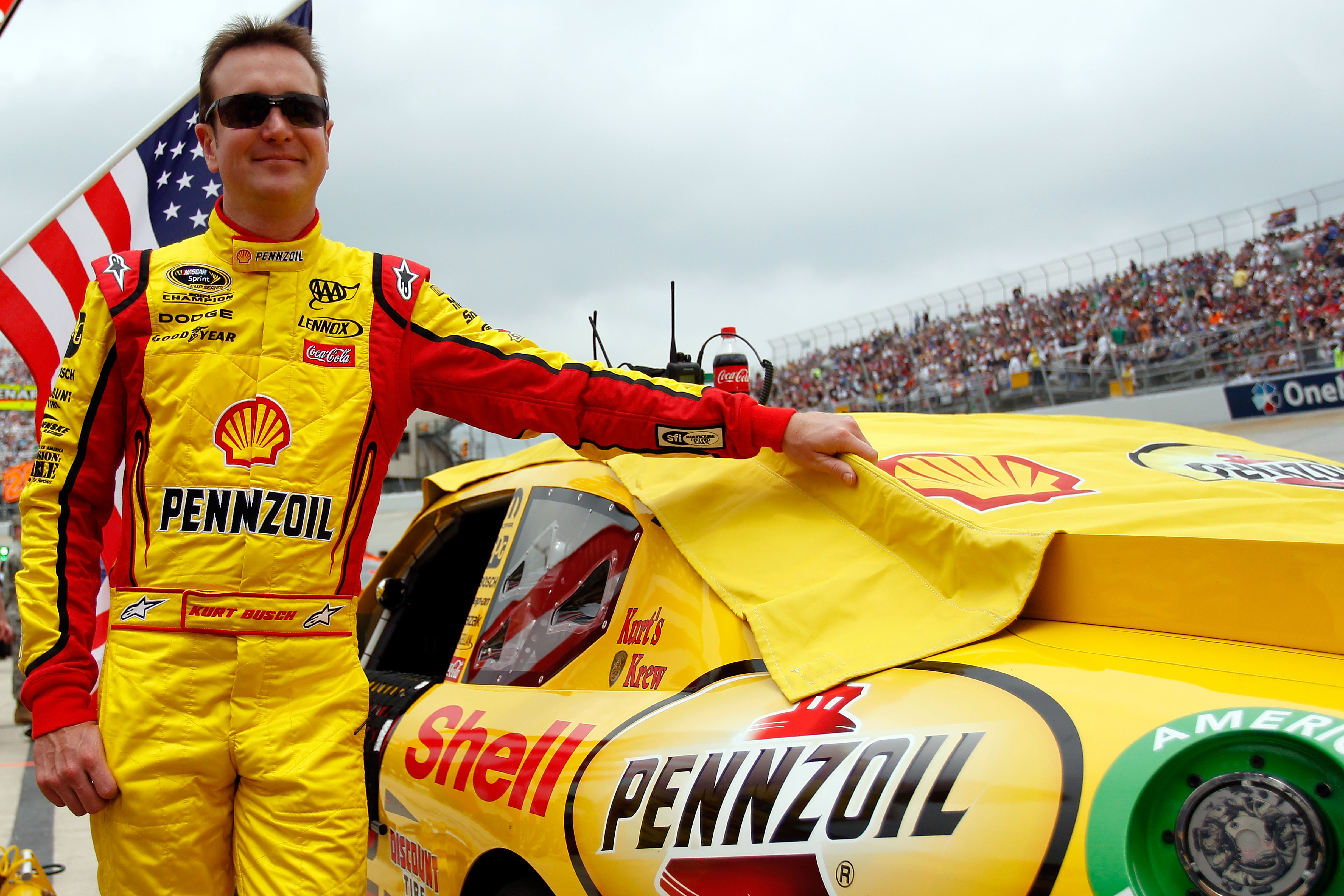 The word "jerk," according to the always-reliable Urban Dictionary, is "an insensitive, selfish, ignorant, cocky person who is inconsiderate and does stupid things."

Such a slang term is based on one's perspective, especially when it comes to motorsports history.

A "jerk" could be someone like Kurt Busch (or, better yet, his younger brother Kyle) a driver who is willing to speak his mind and throw temper tantrums when things doesn't go his/her way.

A "jerk" could be a horribly inept track owner who decides to run his own open-wheel series with the world's most prestigious oval race, while the teams and drivers that made it so decide to go their own way.

Without further ado, here are the 20 biggest jerks in motorsports history. Keep in mind that "jerk" is a relative term.

Since his name is part of the title of this slideshow, we'll start with Kurt Busch.

Busch's jerkiness was first on display during the 2001 Daytona 500, when Dale Earnhardt supposedly gave him "the one-finger salute" after the then-rookie made contact with the "Intimidator" during the race.

Of course, there was the feud with Jimmy Spencer that started in earnest with a battle for the lead at Bristol in March 2002 and ended with Spencer punching Kurt Busch after an August 2003 race at Michigan International Speedway.

Busch also made an obscene gesture at Tony Stewart after the June 2007 race at Dover International Speedway, landing him a 100-point, $100,000 fine as a result.

Finally, Busch was fired after an alleged drunk driving incident in Maricopa County, Ariz., before the November 2005 race at Phoenix International Raceway.

Upon hearing of the incident, Roush Racing fired him, with team spokesman Geoff Smith claiming that the team was "done as Kurt Busch's apologists," according to a Nov. 13, 2005, Associated Press report that appeared on ESPN.com.

Any list of the biggest jerks in motorsports history already has to include Kyle Busch.

As far as national touring series (Sprint Cup, Nationwide, Camping World Truck) wins go, he's already one of the all-time greats with 96 wins, winning most of those races with Joe Gibbs Racing equipment.

The self-proclaimed "old" Kyle Busch was one of the most temperamental drivers in NASCAR. From his short and snippy interviews with reporters after losing races, to his ability to anger almost anyone on the track with his aggressive driving, "Rowdy" fit the "Days Of Thunder" character whose nickname he acquired.

The most "jerky" moment of all, however, came after winning a Nationwide Series event at Nashville Superspeedway in June 2009.

In Victory Lane, Busch accepted the trophy, a guitar with a Sam Bass-designed paint job. He then proceeded to smash the trophy into pieces, claiming he would share it with his crew.

Sam Bass certainly thought he was a jerk after that move. 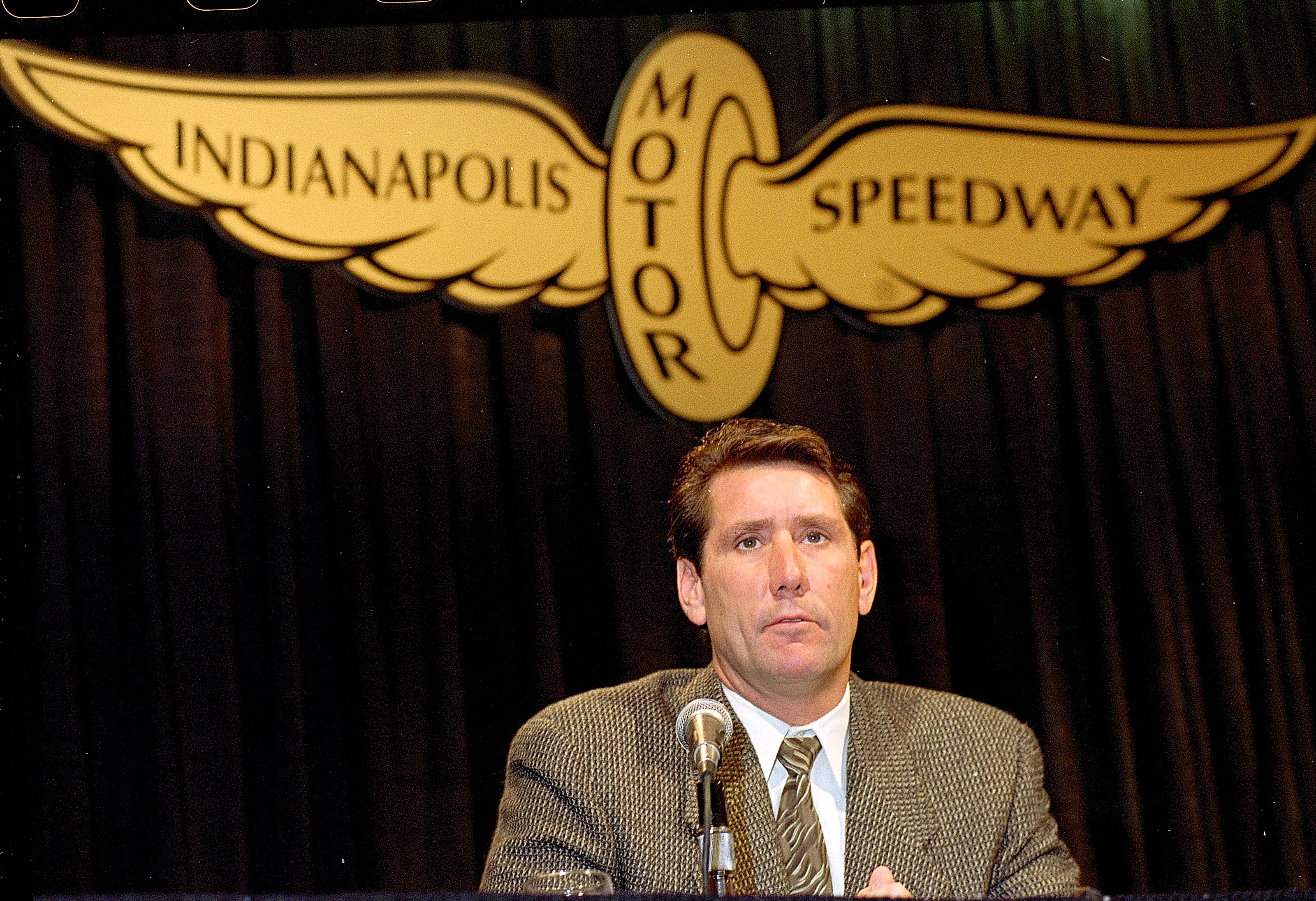 Tony George will be remembered as the man who helped bring Formula One back into the U.S. by creating a infield road course and bringing the legendary infield "Pagoda" into the 21st century at the Indianapolis Motor Speedway (Let's not forget the Brickyard 400).

However, he will most certainly be remembered as the man who took his ball and went home after car owners kept him off the Championship Auto Racing Teams (CART) board of directors in 1994, creating the Indy Racing League (IRL) and helping cause a 12-year split that forever damaged open-wheel racing in the United States.

George severely restricted CART teams from attempting the Indy 500 in the early days of the IRL, as a 33-car field of no-names, has-beens, rookies and maybe Arie Luyendyk took the green flag on the eve of Memorial Day.

When CART drivers started showing up, they quickly began to dominate at the Brickyard. The names of Montoya, de Ferran, and Castroneves began to appear on the Borg-Warner Trophy, overshadowing multi-time series champion Sam Hornish Jr.'s reign.

Once big-name teams like Penske and Ganassi began to jump from CART (soon known as Champ Car) to IRL, George finally got the upper hand. Champ Car eventually folded in 2008.

While George was most certainly a "jerk," he eventually won in the end.

It's a shame that the final days of Champ Car were marred by low car counts and general apathy towards the series, because fans missed out on one of the most intense rivalries in recent memory between Paul Tracy and Sebastien Bourdais.

Even though Tracy is no clean racer himself, Bourdais seemed to pull off a series of highly questionable moves on the Canadian vet throughout the 2002-2005 seasons, as seen in this video. 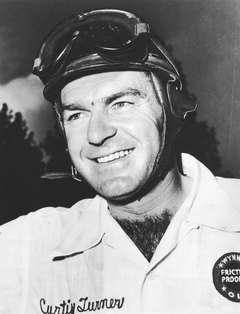 Before unions received the negative stigma from big businesses like they do today, Curtis Turner attempted to create a drivers' union with Teamster head Jimmy Hoffa in 1961.

Turner also attempted to sanction his own races with smaller promotions while participating in NASCAR events, essentially helping the competition while driving in what would eventually become the Sprint Cup Series.

Because of this, NASCAR banned Turner for four years, allowing him to return in 1965.

Before they got on everyone's good side by using "side-by-side" coverage for the final 25 laps of Sunday's Sprint Cup race at Dover, Fox pulled off one of the biggest "jerk" moves in motorsports history by blocking out the sponsors that didn't pay for ad time on computer-animated cars during the 2001 Budweiser Shootout.

Ignored companies complained, and the sponsors eventually returned for the Daytona 500 the next weekend. 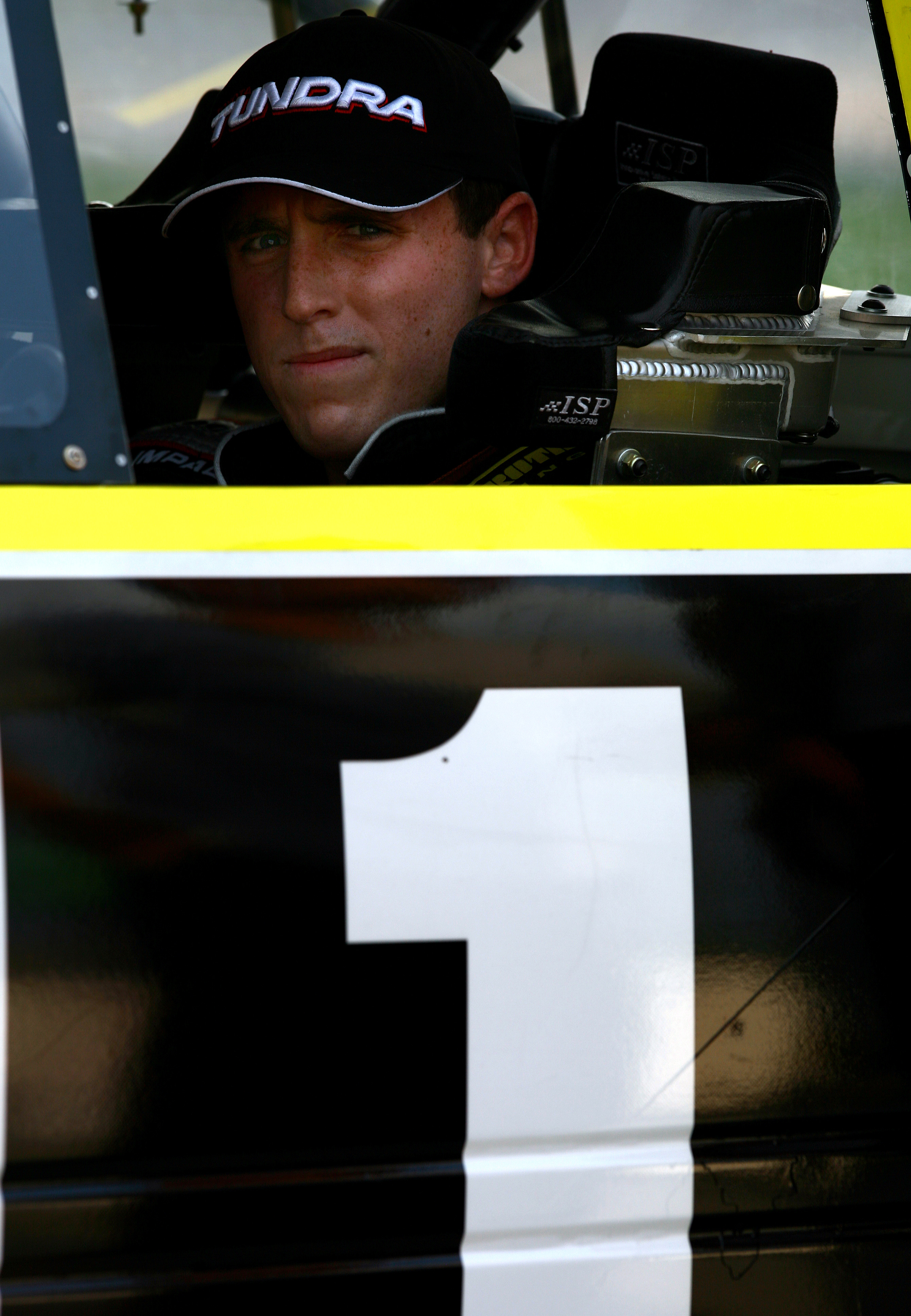 Aaron Fike pulled off a huge "jerk" move by driving in the Camping World Truck Series under the influence of heroin, something that surprisingly failed to result in any injuries to himself and the other 35 drivers on the track.

After he was banned from NASCAR on July 11, 2007, Fike admitted to the use of heroin and other drugs in an April 2008 ESPN interview, noting that he would use drugs before races. 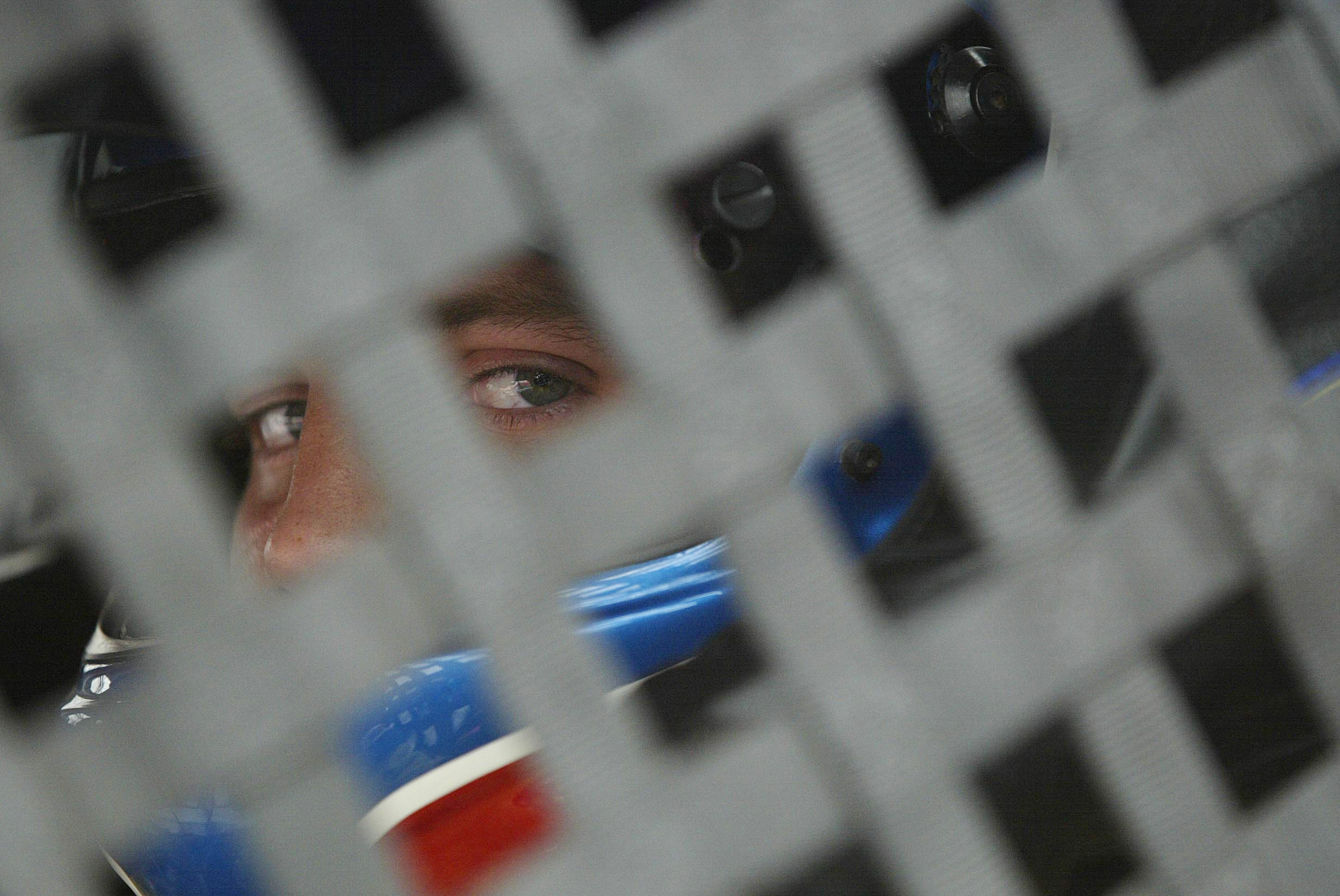 Brian Rose is another former Camping World Truck Series who definitely displayed some "jerk" actions in his career.

In 2003, Rose was banned from NASCAR for failing to take a drug test; two years later, he went to Warren County Jail in Kentucky for illegal possession of marijuana and a handgun.

Although the ban was lifted in 2010, Rose's career was obviously never the same.

DISCLAIMER: This is meant as no disrespect to Shane Hmiel at all, as he's currently in paralysis after a tragic USAC crash in Terre Haute, Ind., last October. Here's hoping you'll walk again soon, Shane.

Hmiel's "jerk" move is more of a "bonehead" one...he's the only driver in NASCAR history to fail three drug tests, earning a lifetime ban in the process.

Additionally, there's his now-legendary disrespect of Dale Jarrett during a Nationwide Series race at Bristol Motor Speedway in March 2005. Just watch the video. 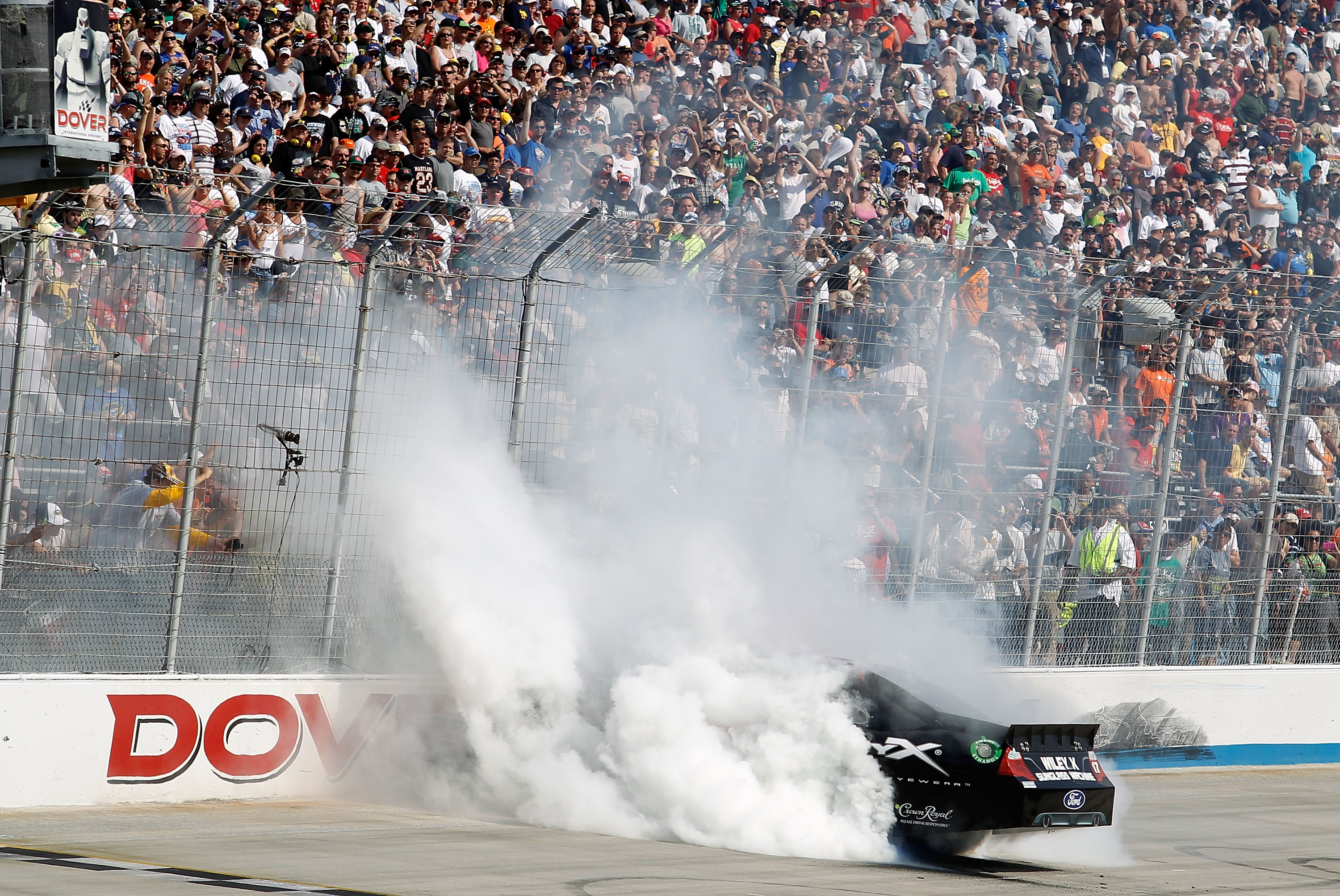 While Dover International Speedway is still very much alive and well, two of its former tracks -- Gateway International Raceway and Memphis Motorsports Park -- have shuttered their doors in recent years.

Only Nashville Superspeedway is still functioning.

To those markets that enjoy racing, Dover Motorsports is one "jerk" of a company.

Punting Terry Labonte for the win at Bristol Motor Speedway in August 1999 is a "jerk" move, even if you're the "Intimidator."

Sorry, Dale. You're still one of the all-time greats.

The beginning of the end for CART as a legitimate open-wheel racing series came prior to the Firestone Firehawk 600 in April 2001 at Texas Motor Speedway...a race that never took the green flag.

When the event was announced, concerns immediately popped up regarding the high speeds and g-forces felt by the drivers at the 1.5-mile oval originally designed for NASCAR events.

Texas Motor Speedway officials even urged CART to hold tests at the track prior to the event, noting that there would be no issue with a race cancellation should the speeds prove unsafe.

While testing did occur, the speeds turned during practice raised many eyebrows. Laps were run with average speeds of over 233 miles per hour, unsafe at any track.

On the day of the event, medical officials urged CART to cancel the event, even though 60,000 fans were patiently waiting for the green flag to drop. CART did so, and faced lawsuits from Speedway Motorsports, Inc. (owners of Texas Motor Speedway) as a result.

A "jerk" move from CART signaled the end times for a once-successful promotion.

CART becomes a repeat offender on this list, based on the history of heavy attrition and high speeds at the track that was never really fixed until the series left the 2-mile Michigan International Speedway in 2001.

In the 22-year history of CART events at Michigan, the careers of legends Danny Sullivan and Emerson Fittipaldi were ended at the track, while greats such as A.J. Foyt, Mario Andretti, and Bobby Rahal suffered severe injuries.

Multiple races saw 10 or fewer competitors still running at the end of a 500-mile race, something significant when over 30-35 drivers would take the green flag. (I still remember the infamous 14-car Milwaukee 2005 Champ Car event.)

It wasn't until 1998 when CART decided to make any significant changes with the inception of the Handford Device, essentially the open-wheel version of NASCAR's restrictor plate.

Prior to the event, Michelin had addressed concerns regarding tire failures in practice earlier in the week.

The tire company asked Formula One to add a chicane near the oval Turn 4 that caused many of the failures, but the proposal was turned down.

Thus, teams that ran Michelin tires pulled into pit lane before the start of the race, leaving six cars to take the green flag.

Fans threw bottles and other debris onto the track, and Formula One's reputation was damaged until the series left the "Brickyard" in 2007.

One year after winning what was then known as the PPG Pro Cup, Nigel Mansell found himself becoming one of the biggest "jerks" in motorsports history after an incident with Dennis Vitolo 89 laps into the 1994 Indianapolis 500. 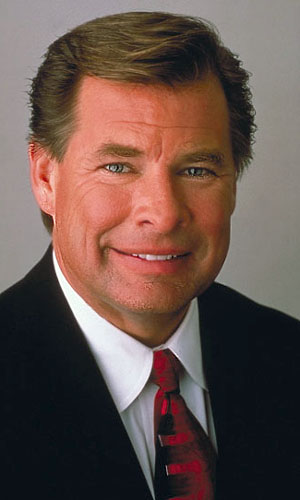 You've got to be a real "jerk" to be an announcer and make this list.

Bill Weber, congratulations for pulling it off.

You don't have to look this one up, because I already did.

After a five-year reign as TNT's lead NASCAR play-by-play man in which he earned fame for his flubs and errors, Weber was fired in July 2009 after allegedly complaining about conditions in his hotel room in Loudon, N.H. 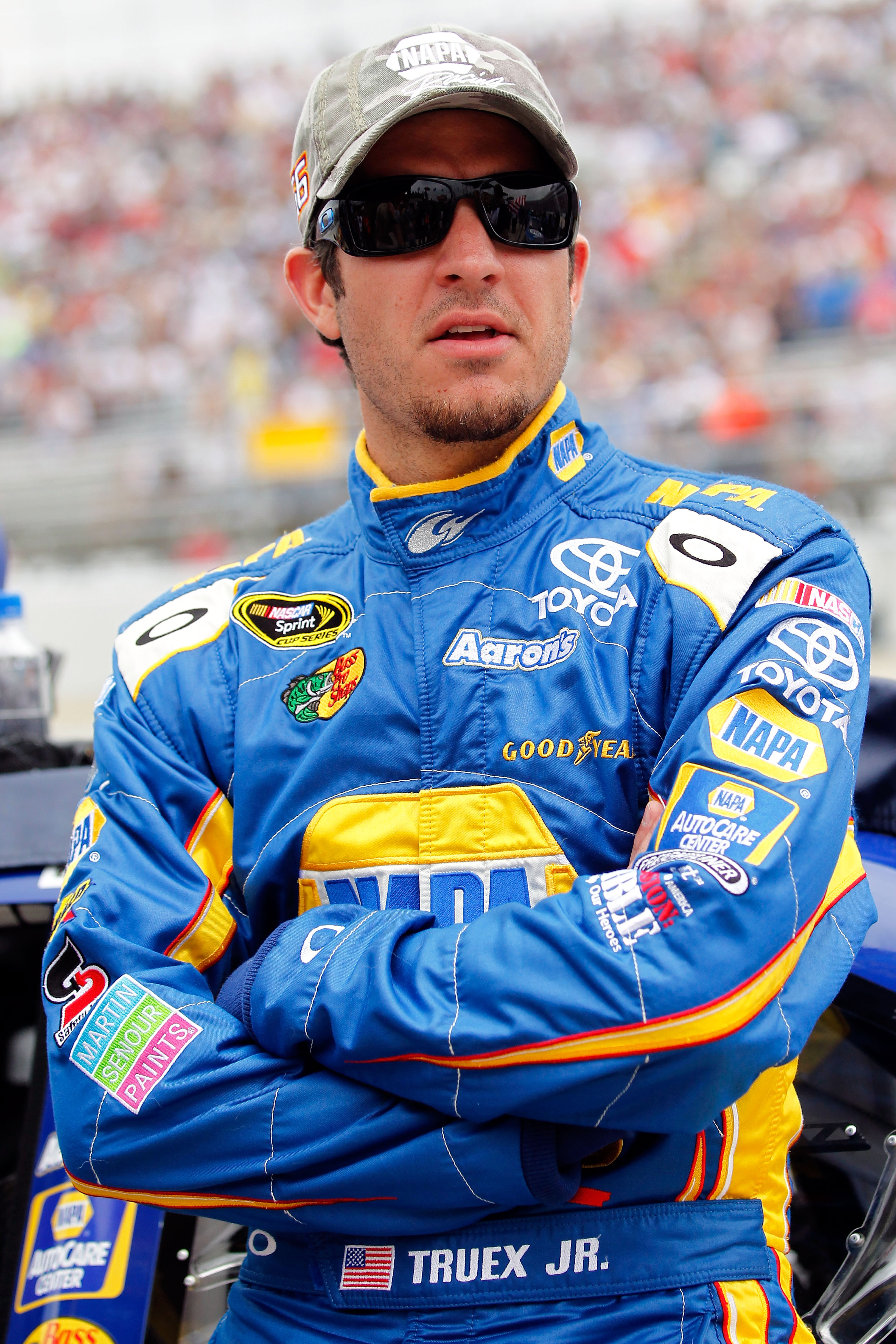 After a poor pit stop at Richmond International Raceway last month in a Sprint Cup event, Martin Truex Jr. announced that he was firing his pit crew...a move he had zero authority to do in the No. 56 Toyota for Michael Waltrip Racing.

I realize they may have been incompetent, but that's a bit of a "jerk" move.

Punts like these from Kevin Harvick can sometimes make him a real "jerk" to deal with on the track.

If you're a member of the press, Tony Stewart can be a "jerk" to deal with.

For example, take, well, pretty much everything in this video.

"Cousin Carl" is a great ambassador for NASCAR, but there's no denying that he's done his fair share of stupid things behind the wheel.

Just ask Brad Keselowski, who would argue that Edwards is the biggest jerk in motorsports history.