English Premier League: 15 Sensational Storylines to Watch out for in 2011-12 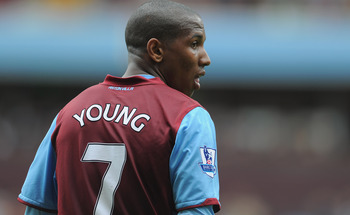 We are firmly in the middle of the Premier League's summer transfer season, and the few moves that have been made are already gearing up fans for what looks to be another exciting campaign in England's top flight.

In addition to the speculation generated from summer moves, other clubs will grab attention with managerial changes and second-year players.

As the outlook of the 2011-2012 campaign begins to unfold, here are 15 sensational storylines to keep an eye on next year. 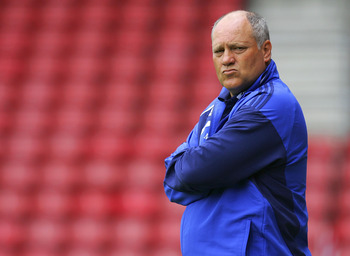 Mark Hughes is out at Fulham, and Martin Jol comes back to England as a manager after his four-year stint with Tottenham from 2004-2007.

The Cottagers have been steady in the Premier League, jockeying in the top half of the table, but hardly scratching for a top-four finish.

Can Jol's experience bring about positive changes at Craven Cottage? Or will his presence keep the status quo?

Many nod in approval of the new hire, but it will take more than Jol pacing the sidelines to bring Fulham towards the top five. 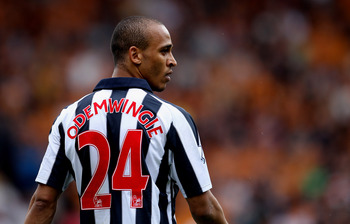 Peter Odemwingie took the Premier League by force with 15 goals in his first year in England.

The Uzbek-born Nigerian carried West Brom to an 11th-place finish last season, after the Baggies' promotion to England's top flight.

What is there to expect from Roberto di Matteo's side in its second campaign in the Premiership? Can West Brom keep a handle on Odemwingie, or will he outgrow his place at the Hawthorns and make a switch? 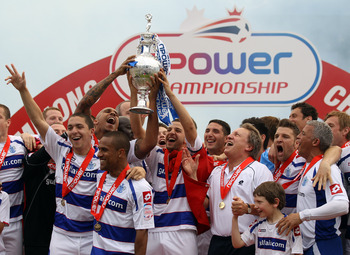 As is typical with every new Premier League season, those three promoted clubs attract a blip of attention.

Last year, Newcastle set its sights on its return to England's top flight. West Brom caught many by surprise with an 11th-place finish. Blackpook had its ups and downs, led by its captain Charlie Adam, but still faced relegation on the final round of league play.

Beginning in August, Swansea, Norwich and Queens Park Rangers will start their quests to keep a place in the Premiership for the 2012-2013 season. 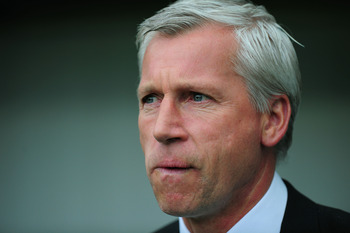 Newcastle survived its promotion year and will now prepare for its stay in the Premier League.

The Toons picked up a healthy paycheck from their Andy Carroll sale. On whom they spend their transfer budget could provide the significant boost needed to make a big splash in 2011.

But putting the pieces together to avoid relegation likely will be the more pertinent goal for the upcoming campaign. 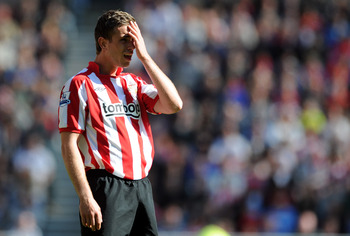 One of the most publicized transfers so far this summer, and quite frankly one of the significant few, is Jordan Henderson's move from Sunderland to Liverpool.

The under-21 England star cost the Reds a reported £20 million, and his production over the next few seasons will be highly monitored. But whatever mountains of expectation Henderson brings to Merseyside, Liverpool landed one of the most coveted youngsters in England.

If he's the next great Liverpool midfielder, then the Reds secured him mighty early in his career. 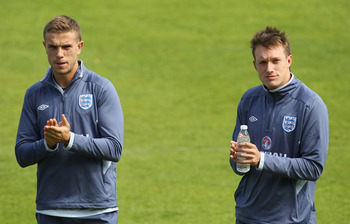 The deal that will send England's U-21 Phil Jones to Manchester United from Blackburn is all but completed.

Despite whatever illegalities or alleged illegalities have happened, the 19-year-old defender reportedly will cost United £20 million.

The two youngsters, Jordan Henderson and Jones, who will inevitably make expensive switches to high-profile clubs will attract a load of attention come next season.

For Jones in particular, how long will it take for his hefty price tag becomes worthwhile for United's faithful? 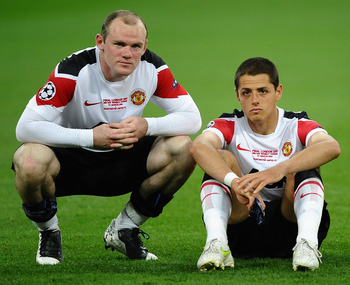 Sir Alex Ferguson made clear his strikers of choice during the UEFA Champions League Final against Barcelona.

While Dimitar Berbatov, who shared the Golden Boot with Carlos Tevez, sat on the sidelines, Wayne Rooney and Javier Hernandez took the pitch.

Hernandez had a superb, 13-goal first year with United, after a near fallout with the sport. Rooney battled injuries and form all season, but still recorded 11 goals and 11 assists in what most would consider a down year.

The duo appear set for another year as United's top selections up front. 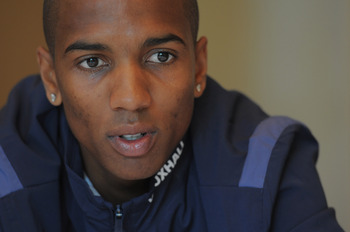 One of the rumors that has picked up considerable smoke in the past week is Villa's Ashley Young potential move to Old Trafford.

While Young's skill set doesn't exactly fit the glaring hole in United's midfield, his exceptional service and cleverness with the ball in all areas of the pitch is something not to be overlooked.

Should the winger make the move, his chemistry with the load of in-their-prime talent will be an exciting development to witness.

And where there is smoke, there is usually fire. 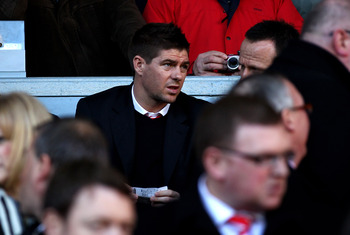 Just this past week, Liverpool's Steven Gerrard vowed to be back healthier than ever.

There is little doubt that when Gerrard is fully fit, the Reds are a completely different team.

And with the late-season run that Kenny Dalglish's men put together at the end of last season with the likes of Luis Suarez, Raul Meireles and Dirk Kuyt, one can only imagine how much more potent the club could be with Gerrard patrolling the midfield. 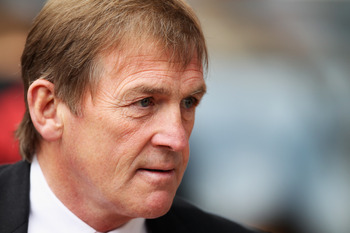 Liverpool secured Kenny Dalglish as its manager for another three seasons after the Reds impressively climbed back into the thick of European qualification after an abysmal start to the campaign.

Now with a talented core which includes Andy Carroll, Luis Suarez, Raul Meireles and Steven Gerrard, among others, what will be of the 2011-2012 version of Liverpool?

They've just added one of the most coveted youngsters in Jordan Henderson. Who else will the club bring in to make a run back at the top four?

Much will be expected of the Dalglish's side, but can they live up to that hype?

Tottenham's Quest for the Champions League 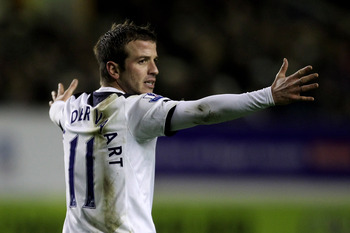 Tottenham rode Gareth Bale at the beginning and Rafael van der Vaart for the remainder of the season in what was a great campaign for Spurs.

Hardly anyone expected the North London club to advance to the quarterfinals in the Champions League, fending off some of the biggest clubs in Europe in AC Milan and Inter Milan in the process.

But despite the highs from Spurs' great 2010-2011, they failed to qualify for the same tournament this season.

And though the Europa League provides decent competition, it is in no way the same cash cow that is the Champions League. 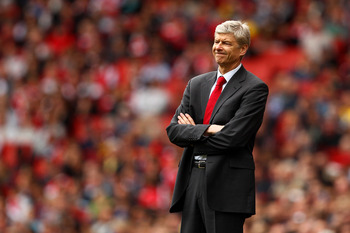 The Gunners may undergo a significant face lift in a variety of areas that will change the landscape of Arsenal's play next season.

Cesc Fabregas, as always, will be linked with Barcelona who knows how many times. Samir Nasri has also been connected with a move out of the Emirates.

Other names caught in the rumor storm are Gael Clichy, Nicklas Bendtner and Denilson.

Though not all of the rumored are destined for a switch, the loss of Fabregas or Nasri is a significant one. But Arsenal looks set for a new direction with some new faces sprinkled about the starting 11. 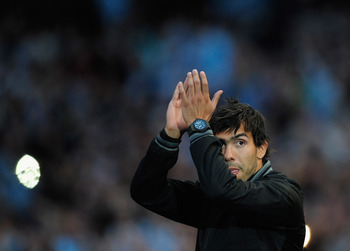 Carlos Tevez has openly stated his intentions of leaving Manchester City, which ultimately begs more head-scratching questions about the club.

Mario Balotelli and Edin Dzeko undoubtedly will be top selections to roam the attacking third, but where will City look to replace the holding and aggressive mentality of Tevez's style.

City's deep pockets lead many to believe of a smug spending spree that will strengthen its offense if and when the Argentine Tevez leaves.

It will be an interesting summer and season at Eastland. 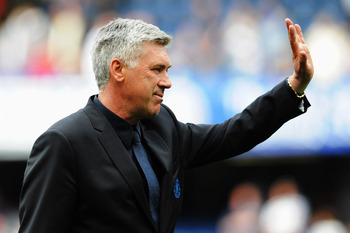 Though Chelsea didn't repeat as champions in the 2010-2011 season, a second-place finish is very respectable. But that result wasn't enough for Blues owner Roman Abramovich.

Carlo Ancelotti is gone as Chelsea's manager, and whoever replaces the Italian, rumored to be Guus Hiddink, will have some added pressure to finish top in the Premier League.

Chelsea will also have a plenty rumors circling the transfer window. The Blues have been connected with high-profile international youngsters in Santos' Neymar and Anderlecht's Romelu Lukaku, two forwards who seem destined for illustrious careers in Europe.

And how will Fernando Torres and Didier Drogba find their top forms in their first full season sharing the attacking third? 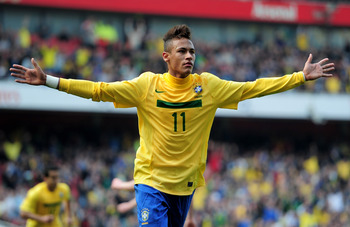 The summertime for Premier League clubs means an opportunity to better a squad. But strengthening requires money, and some teams simply do not have the financial depth to undergo expensive transfers.

But those clubs with cash, Manchester City, Chelsea and Manchester United immediately come to mind, have the chance to add superstars with a couple of signatures.

This summer, the likes of Neymar, Romelu Lukaku and Sergio Aguero are just a few of the high-profile names linked to a switch to the Premiership.

Neymar will cost a reported £41 million, Lukaku an estimated £21 million and Aguero £25 million. Give or take £5 million, the young stars can be huge difference makers, and their summer destinations will be watched closely.