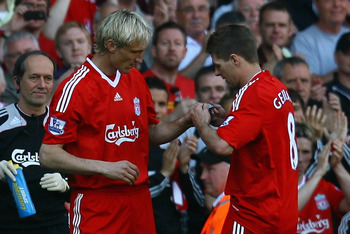 This week saw the news that Sami Hyypia has retired from professional football. He will now take on a coaching role at his club since 2009, Bayer Leverkusen.

Alongside his inspiring international career for Finnish fans what he will always be remembered for is his ten wondrous years of loyalty and consistency at Liverpool, for which he will go down in history as one of the defensive greats for the Anfield side.

Here I will look at the defining moments of Hyppia's Liverpool career, from his humble openings to THAT emotional farewell that will long live in the memories of Kop fans.

His Liverpool Debut: Scouted by a Cameraman! 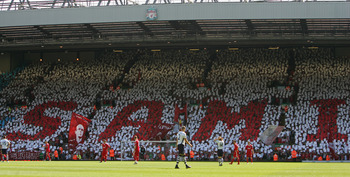 After the inception of the Premier League, Liverpool had failed to achieve a title winning season that would return them to the former glories of the old First Division.

Liverpool were in need of a strong central defender who would deter goals from the opposition. And of all people to identify the man who was needed it was actually a camera man who dealt Liverpool the ace in their pack.

Chief executive Peter Robinson was in his office when the cameraman, who he had never met, came into his office and showed him footage of a certain Finnish defender who had been making a splash in the highest division of Dutch football.

At first Robinson was hesitant towards what Hyypia could do for the club as his height in his opinion could work against him if he was therefore stereotypically too slow for the Premiership.

Thankfully Hyypia emerged into Merseyside in a £2.6 million transfer in 1999 which in hindsight became one of the greatest bargains of all time.

He would soon make his debut on 7 August 1999 in a 2-1 defeat of Sheffield Wednesday in the Premiership. Hyypia was praised for his performance alongside a young Jamie Carragher and so his Liverpool journey began.

After his immediate impact within the club Hyypia would go on to forge the first of two vital defensive partnerships in his Anfield career.

Fellow signing Stephane Henchoz was a Swiss international brought in from Blackburn at the same time as Sami. Together the two would be regarded by many as the strongest central defensive duo in the Premier League.

As opponents they were formidable, with goal line clearances and consistent defending ensuring that rivals found it extremely difficult to break the deadlock against Liverpool.

As the season came to a climax the statistics spoke for themselves. Liverpool were the lowest conceding team in the league, letting in only 30 goals throughout the 38 game duration of the season. Closest to them was Chelsea with 34 goals, with the two sides finishing fourth and fifth respectively.

In the following season Liverpool would finish in third and qualify for the Champions League after a few years out of Europe's elite. The highlight of this season was Liverpool's 1-0 victory over Manchester United where the Henchoz-Hyypia combination proved a vital influence in keeping the likes of Ole Gunnar Solskjaer at bay.

They conceded 39 goals in total placing them only behind the top two, Manchester United who let in 31 and Arsenal who conceded 38.

They would however return to conceding the least amount of goals in the 2001-02 season when they again let in only 30 goals, finishing the season in second behind Arsenal who let in 36.

These seasons of defensive dominance also culminated in a memorable treble where both Henchoz and Hyypia would claim much of their silverware from their time at the club.

With his impressive run since his debut, Hyypia was handed the Liverpool captaincy and lead his side to a triple headed glory for the 2001-02 campaign.

Dubbed the 'Mickey Mouse Treble' Liverpool would go on to win the League cup, FA Cup and UEFA Cup. It was not an easy ride however for a team who would seemingly make predicted victories more difficult than necessary.

In the League Cup early demolitions against Fulham, Crystal Palace and an 8-0 thrashing of Stoke City saw Liverpool reach the final to play Birmingham City.

In the final an early Robbie Fowler goal was cancelled out by a penalty in the last minute when Hyypia's partner in crime Henchoz brought down Martin O'Connor. A tense penalty shoot out saw Liverpool emerge victorious with a 5-4 result. Hyypia would not take part in the shoot out but the triumph was his first as captain of Liverpool.

In the FA Cup final against Arsenal, Liverpool would need to come from behind late on to evoke a 2-1 defeat on their London rivals. In doing so they became only the second team to win both the League Cup and FA Cup in the same season, after Arsenal themselves achieved the feat in 1993.

And then before the infamous night against AC Milan, Liverpool would feature in a dramatic nine goal UEFA Cup final against relative unknown Spanish side Alaves. Liverpool's opponents were just grateful to be in the final in a tie that saw many predict an easy win and treble for the Merseyside outfit.

Two goals in the first 16 minutes, including a stunner from Steven Gerrard seemed to confirm this idea, forcing the aim for Alaves to emerge after 90 minutes without suffering an embarrassing defeat. Yet for Hyypia and Henchoz it would prove to be a contradiction to the norm as Liverpool threw away 2-0, 3-1 and 4-3 leads. Only a late own goal from Alaves saw them off in the final moments of a dramatic extra time period where the golden goal rule applied.

Liverpool under Hyypia's leadership had won the treble in a heavily nerve racking fashion but for Sami it would be his defining season as captain at the team he had supported as a child. 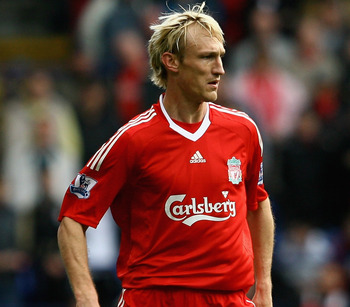 Regular comments from fellow team mates highlighted to the world of football that Sami Hyypia was not only a credible defender but also the embodiment of a 'nice guy.' His heart of gold off pitch matched his lack of bookings on the pitch.

In fact he went 87 matches between January in 2000 to October in 2001 without a single booking to his name. Against a back drop of players who would shower themselves with regular additions to the referees black book Sami would instead reflect similar clean records of the likes of Gary Lineker.

Sadly his record would never remain fully void of controversy as he saw his only red card in a Liverpool shirt with a clumsy sending off against Manchester United in 2003.

After tugging Ruud Van Nistelrooy's shirt he was shown a straight red and had to watch the remainder of a heavy 4-0 defeat from the stands. It is safe to say that Hyypia deeply regretted the sending off and was never seen in the same light again.

Hyypia's permanent captaincy did come to an end when skipper Steven Gerrard took over in 2003, although he was able to stand in when Gerrard did not start.

More importantly the 2004-05 season became one of Sami's strongest. In the Champions League his side put in a mediocre performance in the group stages, coming second to Monaco. However impressive knockout defeats of Bayer Leverkusen, Juventus and Premiership rivals Chelsea saw qualification for the final in Turkey.

In what was an uncommon first half defensive performance Hyypia and his new central defensive partner Jamie Carragher were a duo in disarray. As we all know AC Milan destroyed Liverpool in the first 45 minutes and Hyypia alongside his team mates looked increasingly unlikely to bring the first piece of silverware since their treble home.

Yet a more determined second half performance saw the sides first half break down subverted into a three goal ha-trick in only a handful of minutes which would end with Liverpool emerging victorious on penalties.

It was not the match Hyypia will be remembered most for, but in starting and finishing the mammoth and momentous tie his name will always be etched into the history books as a player who featured in the most famous Champions League final of them all.

In all memorabilia in the aftermath of the final Hyypia did feature heavily along the likes of Steven Gerrard and John Arne Riise, referencing his essential input into the 2004-05 campaign.

Keep Your Head Up: The Goals of Sami Hyypia

In his ten year career at Liverpool Sami scored an impressive tally for a defender of 35 goals in all competitions and 22 in the Premiership.

A vast amount of his tally came from his head in scenes that would give you a constant feeling of deja vu. Hyypia was capable of towering above opposing defenders and gearing the ball into the goal net in a triumphant manner.

His first goal for Liverpool was a stunning lunging header against fierce rivals Manchester United in September 1999. His team may have lost that game 3-2 but his attacking prowess was to become something of a normality in future seasons.

His most important goals tended to appear in the biggest of games. As a result he became one of only a handful of players to score in three Champions League quarter finals. In 2002 he netted against Bayer Leverkusen. This was followed by a ninth minute goal against Juventus in 2005 and a superb headed equaliser against Arsenal in 2008. In the latter game his beautiful goal would lead Liverpool into a 5-2 aggregate win (4-1 on the night).

Since his exit the focus has turned more to the attacks from the front, but when Hyypia was in the squad you could always be certain that he coupled his staunch defensive abilities with some electrifying attacks at the front.

The emergence of Daniel Agger later on into Hyypia's Anfield career meant that ultimately his days were numbered. He had joined the club at 26 so a solid ten years was a welcoming return for the player taken on in 1999 with little expectation.

When his career came to a close with an 84th minute substitution appearance against Tottenham in 2009 he ended a run of 464 games in a Liverpool shirt. In total this included 318 league fixtures, 48 domestic cup appearances as well as 94 European games.

In doing so he edged himself into the top 20 list of match appearances by a Liverpool player. More incredibly this was composed of 455 starts with only 9 substitute appearances and 18 games where he was substituted himself.

A further accolade was the abundance of European action he featured in. Between the 20th November 2001 until 21st February 2006 he played in every minute of 57 consecutive European games.

Such a history for a player could only be met with a farewell that would move even the thicker skinned of people to well up. When the final whistle went in Liverpools 3-1 win over Spurs Hyypia was given a standing ovation from the ground alongside a team lift from his fellow players. Understandably the occasion became slightly overwhelming for Sami and for a few moments he had to hide himself under his shirt, to emerge obvious with emotion.

When he exited Liverpool had ended on a high, coming the closest they had ever come to a Premiership title - only missing out narrowly to Manchester United with only two defeats to their name.

Hyypia was then described as 'one of the best bits of business we have done over the years, a steal, a bargain.'