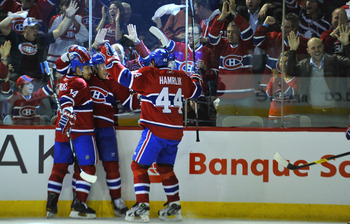 When attending a game of your favorite hockey team, you just wait for those moments: the crushing hits that cause uproars around you, the spectacular saves that get everyone chanting your goalie's name, the missed penalty call that turns the arena into a chorus of boos.

But, most of all, you wait for the moment that the puck crosses the goal line, the moment when fans explode out of their seats, celebratory songs blast out of the speakers, and that treasured, overwhelming goal horn officially announces that something fantastic has happened and everyone is going to know about it.

Each team and each arena have their own goal experiences, whether that is the song, the horn, or the raucous crowd that makes it truly special. However, we must say that, while all are times to long for, some bring even more to the goal experience than others.

Here is our view of which 10 arenas might just be able to boast the best goal experiences.

Note: As a video slideshow, we'll be bringing you our favorite YouTube video, posted by a fan of that team, that gives you, the readers, the best experience of witnessing a goal in that particular arena.

While this season may not be the most memorable, fans at the "The Rock," otherwise known as the Prudential Center, have had a lot of goals to cheer about in the past and a great way to cheer for them; by screaming "You Suck!" at the other team.

Agreed, it may not win Devils crazies the Lady Byng Trophy of fans, but the tradition has held strong and, at many times, has represented a lot about what New Jersey was about. Add to that a long goal horn that will make even the deafest fan hear it, and you have quite a goal experience at The Rock.

One of the most clear goal horns to experience on television, the Sabres horn and long, slow siren mesh perfectly in a perfect blend of insanity to create an even more exciting goal experience for those attending a Buffalo game at HSBC Arena.

The Sabres also sport some of the loudest and most-willing-to-jump-out-of-their-seats fans around, which can often attempt to drown own the arena's goal festivities...though we're pretty sure they never quite will. Still, if you're looking for goal celebrations that will really get any hockey fan on their feet, Buffalo is most definitely the place to go.

It's not a traditional hockey market? That's true. They're not exactly known for, let's say, any sellout streaks? Also quite true. Yet, nonetheless, while the Panther growls menacingly and the slightly-less-than-average amount of fans make enough noise for anyone just listening to figure it's the Olympic finals, the BankAtlantic Center actually manages to have one of the best goal experiences in the NHL.

The horn seems to go on forever, and that's certainly no bad thing, and that's then followed up by Kerncraft 400 (also known as the oh-oh-oh-oh-oh-oh song), our personal favorite goal song. As you can see in this fan's video, Florida hockey fanatics can actually be quite loud, if not prevalent. It may surprise you, but although Florida is the only southern team to make this list, they really do deserve to be here.

The Red Wings do things a little differently by holding the horn off a few seconds after the goal, but that just makes the crowd even more thunderous as they seemingly hope to reach decibels where they might be able to drown out that unconventional goal horn altogether. As a Detroit fan, you'll get to see a lot of goals, and from a close-to-the-ice section, as this clip was able to capture, the experience be amazingly exhilarating.

Last year's Stanley Cup Champions didn't do quite as well in the postseason this time around, but their fans still had a lot to yell about and a fantastic celebratory way to do so.

The United Center has made the 'Hawks incredibly annoying yet team-defining "duh-duh-duh" tune a household "stuck-in-your-head" song, and one of the largest average crowds in the league all chanting along makes it even better...and even more irratiting for opposing fans and players, too.

It takes a certain type of hockey nut to be a Blackhawks fan, no doubt. But we think they like it that way, and, with a goal experience like this, they might just be able to win over a few others, as well.

The Penguins moved from old, classic Mellon Arena to the brand-new gigantic CONSOL Energy Center last summer, but they kept almost everything about the goal-scoring experience from the old building; the horn, the song, and, of course, the same superstars who happen to set off those two other things quite often.

Pittsburgh's steady, melodic (if you could call it that) horn serenades the loud, obsessed Pens fans with a trademark sound that has seen use in two of the past three Stanley Cup finals. You want goal experience? Head to Pittsburgh.

Although the Wild haven't been too successful over the past decade, Minnesota fans continue to flock to the Xcel Energy Center to keep the sellout streak alive, and that alone makes watching a Wild goal a bone-chilling yet thrilling time. Still, of course, the never-ending goal horn and addictive chanting song that follows it do not hurt.

This video captures the split second as the anxious fans filling the arena to brim erupt in joy and insanity, a happy mob of Wild enthusiasts, "Wild", not only describing their favorite team but also their reactions to Wild goals. Minnesota may unfortunately stay out of the league spotlight most of the time, but their goal experience still stays as one of the best.

The low fog horn may be brief, but, coupled with the Sharks' California-style version of a typical goal song, it makes for one of the more team-distinctive celebrations in the NHL. We really enjoy the way San Jose has arranged the goal experience in the Shark Tank, giving it the third-best spot in the rankings.

Thousands and thousands of rowdy fans straight off the beach make the Sharks a destination for a great hockey game to attend and they don't downgrade the experience at all with such a celebration. Now, if only they could finally win a Cup...

Nothing about the Montreal goal experience in the Bell Centre is traditional. They have a higher-pitched horn that a screechy three-year-old girl that goes on forever, an odd goal song that has been used by no other team in history, and, frankly, an untraditional crowd, too; untraditional in the way that no other jam-packed arena can come close to their sound intensity level.

But perhaps we shouldn't call it untraditional, since it seems that, quite often, the Canadiens set the traditions. This isn't the classic goal experience, but it is one you'll never forget; a towel-waving, French-speaking riot all celebrating a little circle of rubber sitting in the goal, one that set off yet another rediculous goal celebration at the hands of the Habs.

You won't forget a goal at the Verizon Center, that's for sure. They'll "Rock the Red," scream their heads off, and watch another out-of-the-blue celebration after another "where'd he learn how do that?!" goal by Ovi. So, whether you love or hate it, we're pretty sure Washington comes as close to the pinnacle of a goal experience is any team will ever come.