World Football: Listing the Top 10 Football Songs of All Time 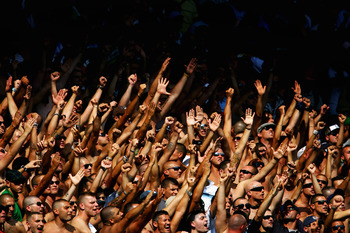 Particularly in Europe, Football is a game of high emotions; a game without parallels in the sporting world.

According to a recent study by The Social Issues Research Centre, who conducted research over almost 20 European countries, 80 percent of studied World Football fans believe that their presence has a direct effect on how the game is played.

The study report put it this way:

Football fans describe themselves as the 'twelfth man' — as essential to the success of the team as the players and coaching staff. It is the actions performed by fans during the game — the ritual chants, songs, banner waving, etc. — that motivates the team, intimidates the opposition players and perhaps even influences referees' decisions. The fans truly believe they must attend the game to 'help the team to win,' not just to observe the event.

Today, we take a trip in to the life of a fan as I list the top 10 football songs of all time.

I'm Forever Blowing Bubbles is a song written by John Kellette, Jaan Kenbrovi, James Kendis, James Brockman and Nat Vincent that was released all the way back in 1918. In the late 1910s and early 1920s, the song was performed and recorded by most of the leading music groups of the time, but today it is famous for its West Ham connections that date back to the 1930s.

The Hammers were introduced to the anthem by manager of the time, Charlie Paynter, after he met a young trialist who looked like the boy in the well-known "Bubbles" painting by John Millais that was featured in a soap commercial at the time. And from that simple tale, I'm Forever Blowing Bubbles became the anthem of West Ham Utd.

Liverpool FC is a club that runs very high on emotion; fans have been through just about everything you could imagine, from the heights of winning five European Cups, to the depths of Hillsborough and Heysel. And with this comes a very strong and emotional supporters group. And what we see here, as with many other famous Liverpool songs, truly reflects that.

You'll Never Walk Alone is a show tune from the 1945 Rodgers and Hammerstein musical Carousel, that was adopted by Liverpool FC in 1963 after Gerry Marsden presented Bill Shankly with a tape recording of his group, Gerry & The Pacemakers, performing the song. The media there at the time, reported the next day that Shankly had fallen in love with the song and made it the club anthem.

As well as being performed by Liverpool fans, You'll Never Walk Alone has also been sung by an array of clubs around the world. Those include Scottish team Celtic F.C., Dutch teams Feyenoord and FC Twente, Germany's Borussia Dortmund, 1.FC Kaiserslautern, FC St Pauli and Japan's F.C. Tokyo.

Blaydon Races is a famous Geordie folk song that is frequently sung by supporters of EPL club, Newcastle United. The song was written in 1862 by little-known local performer, George "Geordie" Ridley and is now regarded as the anthem of England’s north-eastern conurbation, Tyneside.

Stern des Südens is a song written by German songwriter Willy Astor and sung by fans of German Bundesliga club, Bayern Munich. In English, its title means 'Star of the South.'

As you'll see, the song is sung in German in the associated video, so I've included a bit of the lyrics so you can get an idea of what they're actually singing.

Which Munich football team is known around the world?
What is the name of this club in this country, the record is held?
Who has won everything there is to win?
Who brings the last decades our league on the go?

FC Bayern, Star of the South, you will never go down,
because we are in good and bad times are like each other,
FC Bayern, German Champions, yes that is my club,
yes it was, and so it is, and it always will be.

This is one of those anthems that makes you feel a lump down the back of your throat—remarkably so, for such a small club.

Blue Moon is a popular ballad that was written by Richard Rodgers and Lorenz Hart in 1934. Today, it is considered as the anthem of Manchester City but, unlike many others in this list, it is a relatively new tradition.

“The first time I can ever recall it being sung was at the opening game of the 1989-90 season at Liverpool,” City historical expert Gary James said, talking to the Manchester City Website. “It had never been sung by fans during the seasons before that.

“At Anfield, City fans were kept behind for a while after the match and a few lads started singing it as we started to make our way out. They sang a sort of melancholic version, but it caught on."

We've Got the Whole Wolrd in Our Hands

In February 1978, Nottingham Forest released We've Got The Whole World In Our Hands, a song that also featured local band Paper Lace.

The song has become popular in football grounds around Europe and has been constantly altered by supporters in many ways. One fine example of this is, "We're The Worst Team in the League," by supporters of Rushden & Diamonds, a side that play in England's Conference National.

Derby County's 14-year-old anthem, Steve Bloomer's Watching may not be You'll Never Walk Alone, but it is certainly something quite special.

The song is about Derby County legend Steve Bloomer, who played for The Rams from 1892-1906 and was widely considered as one of the best footballers of the time.

Cant del Barça is an anthem that was released in 1974 to coincide with Barcelona's 75th anniversary celebrations. Its title in English means Barca Chant.

Jaume Picas, Josep Maria Espinàs and Manuel Valls came together to write the song and it was performed for the first time at the Nou Camp by a choir of 3,500 voices before a clash between FC Barcelona and East Germany.

Nowadays, Cant del Barça is a popular song among supporters of the Catalan giants and can often be heard ringing around the Camp Nou before kickoff.

The whole stadium
loudly cheers
We’re the blue and claret supporters
It matters not where we hail from
Whether it's the south or the north
Now we all agree, we all agree,
One flag unites us in brotherhood.
Blue and claret blowing in the wind
One valiant cry
We’ve got a name that everyone knows:
Barça, Barça, Baaarça!

Glory Glory Man United is a song written by Frank Renshaw that was recorded by the Manchester United F.C. squad prior to the 1983 FA Cup final.

Based on a chant by the club's supporters that went to the tune of The Battle Hymn of the Republic, a hymn by American writer Julia Ward Howe, the song has become popular with not only just United supporters but also visiting fans who have altered the song to Who The F*** Are Man United? The clubs themselves have also got in to the act, with Tottenham, Hibernian and Leeds releasing versions of the song.