College Football 2011: Alabama's Secondary Is Not the Tide's Weakest Link 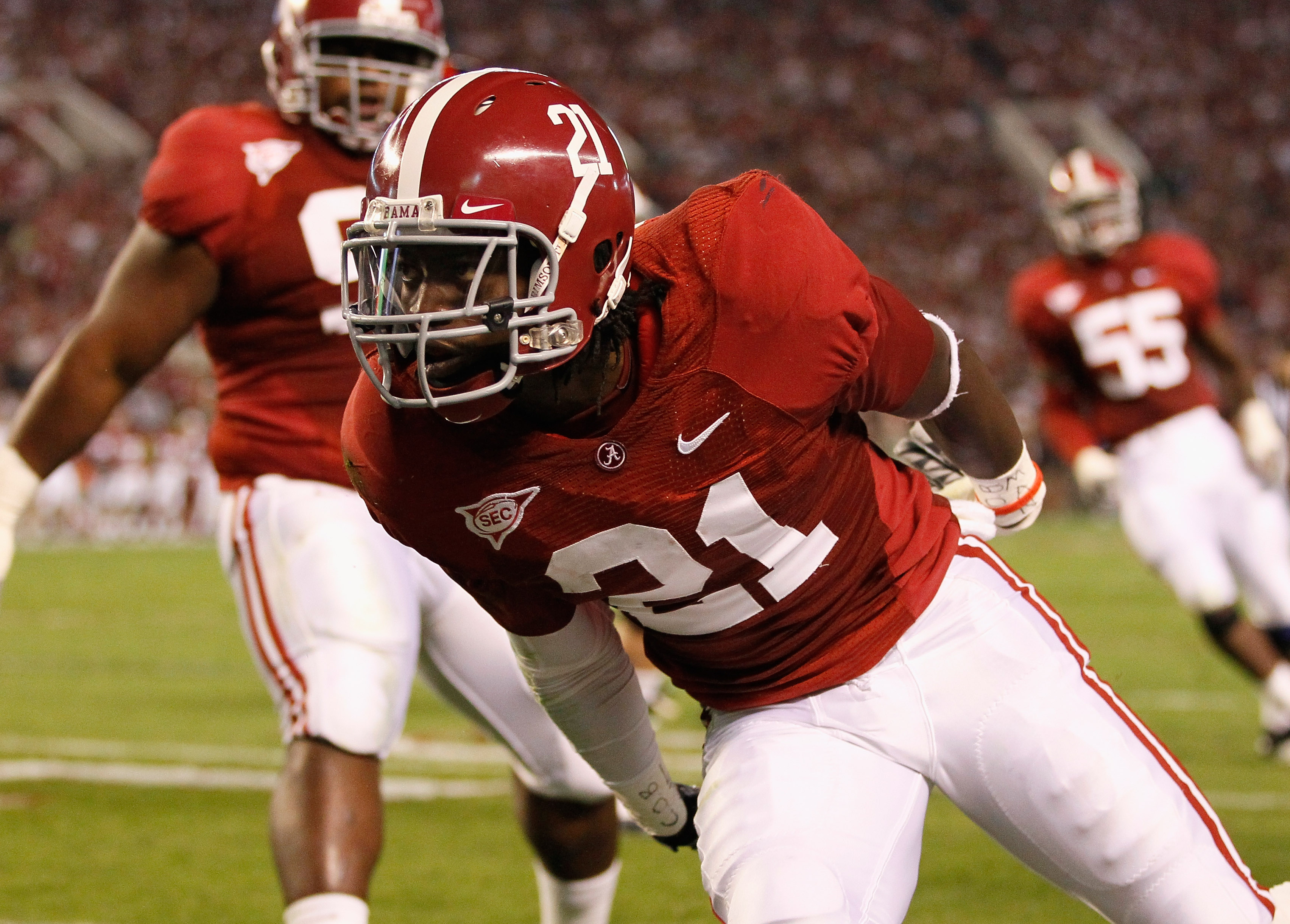 The 2010 Crimson Tide secondary was the big question mark going into the season.

In addition, free safety Justin Woodall was a possible late-round NFL pick. After going undrafted, the phenomenal athlete was picked up by MLB's Tampa Bay Rays.

Needless to say, the '09 secondary was stacked, leaving some very big shoes to fill.

The 2010 squad performed better than expected by finishing 13th in the nation in passing defense and allowing less than 180 yards per game, but not good enough to repeat as national champions.

The 2011 season will see the return of all starters from last year's secondary, including Alabama's prodigal son Robby Green.  With a season of trial by fire in the SEC, will the Crimson Tide fare better this coming season?

CB Dre Kirkpatrick: Has Swagger, but what about 16 Hours of Odor-Blocking Power? 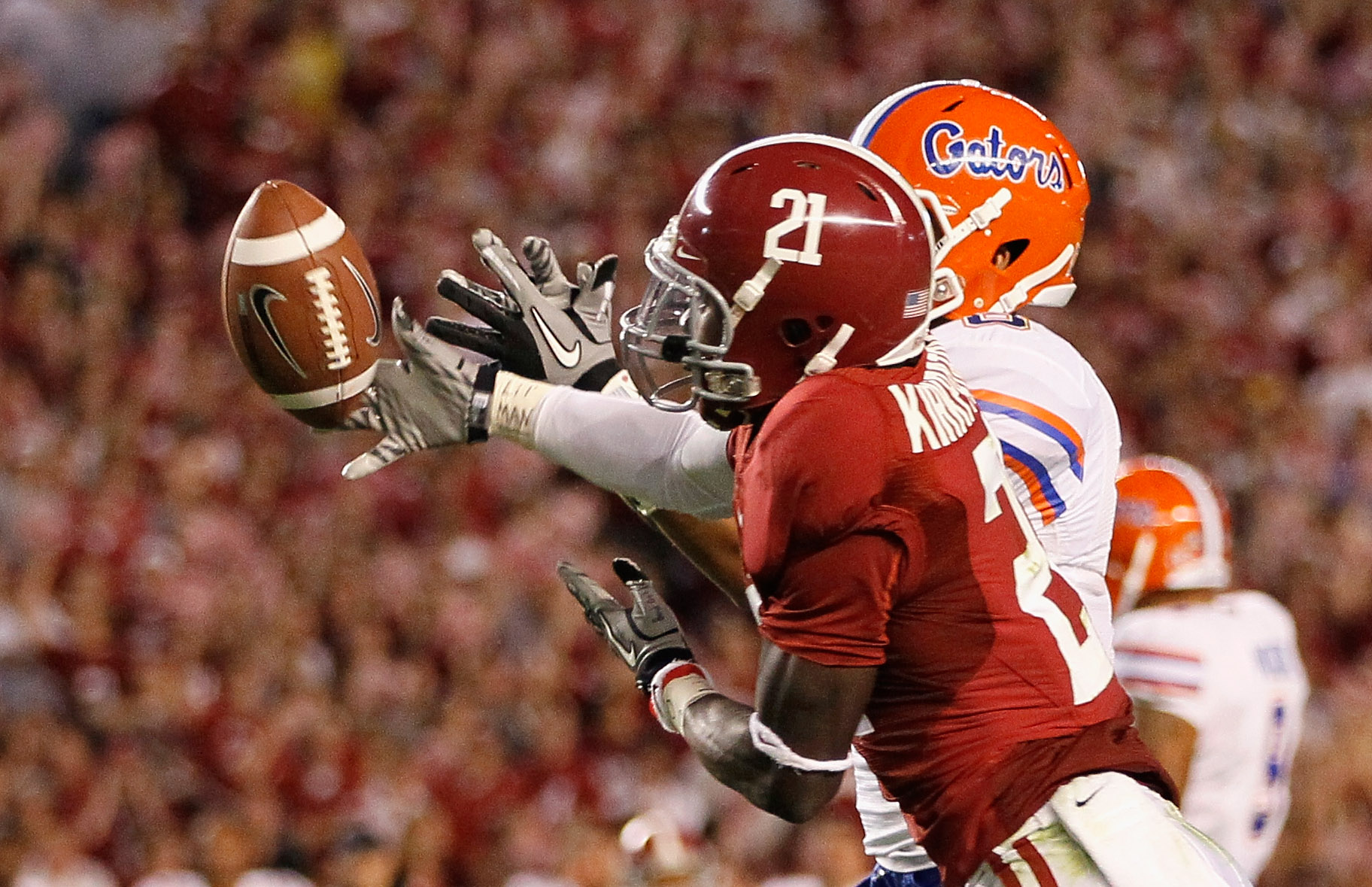 What would you wager he weighs now after two years in Alabama's strength coach Scott Cochran's program?

Last year Kirkpatrick defended 10 passes and broke up another seven.  Tack on three interceptions, including what could be considered the game-saver against Arkansas' Ryan Mallett, and you've got some respectable stats.

Compare that to LSU's Patrick Peterson, a possible top-five pick in this year's NFL Draft, who came in with 10 passes defended, six breakups and four interceptions.

When I'm looking for a good corner, I look at his stats or lack thereof.  Low stats mean he doesn't have the ball thrown his way a lot.  Everyone wants a college version of Revis Island.

Dre Kirkpatrick will be a junior this year, and he performed rather well in his sophomore season, especially compared to his counterpart... 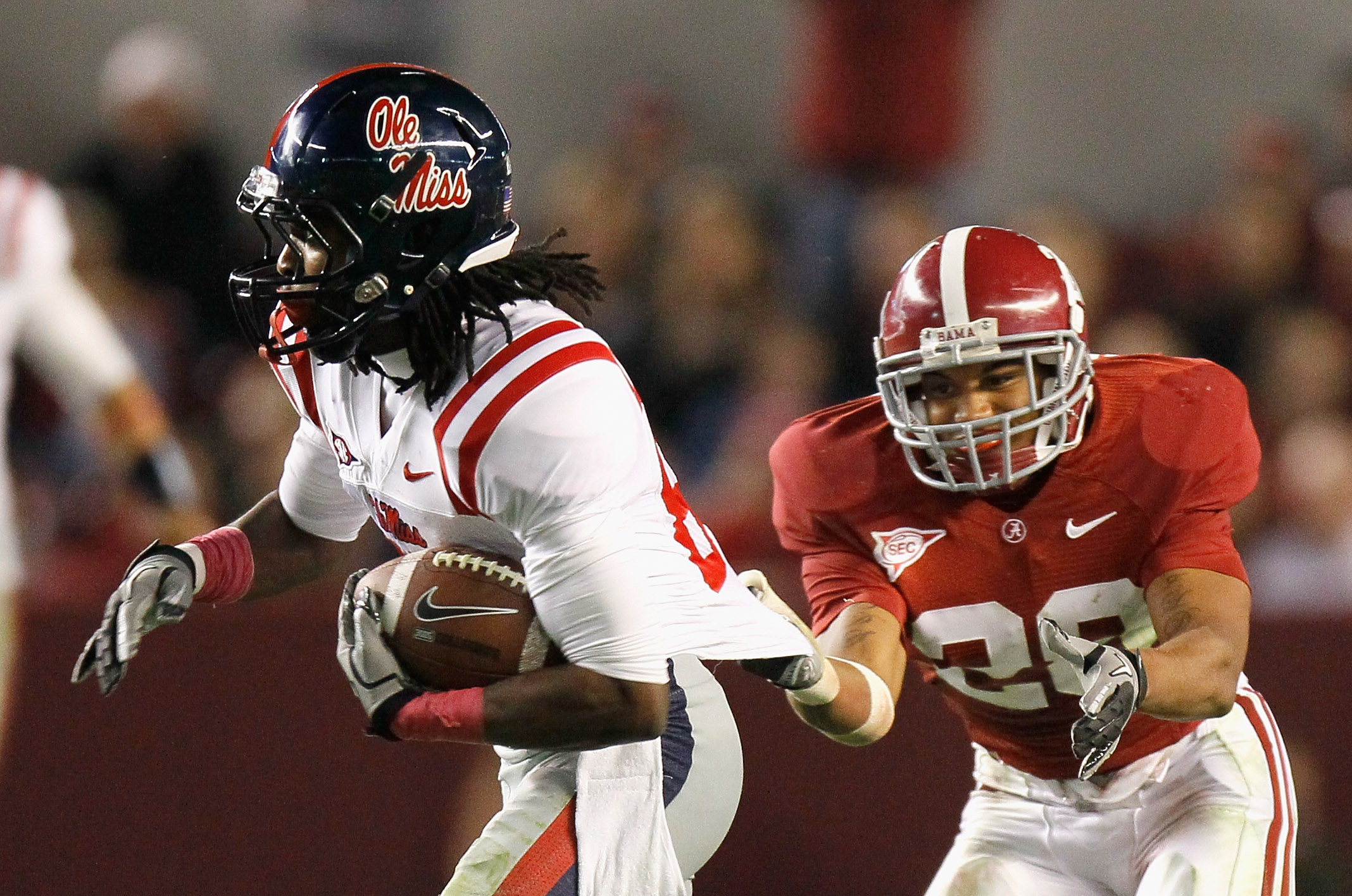 Coming out of high school, Demarcus Milliner was rated as the No. 2 cornerback prospect in the nation. Throughout the 2010 season, I believe he lived up to the hype.

Go ahead, call me crazy.

In his several starts covering for injured DeQuan Menzie—and countless playtime otherwise—Milliner had some busted coverages throughout the year and always at the worst possible time.  He got picked on all year, as opposing quarterbacks knew he was the easiest to throw at.

However, consider these points:  Nick Saban is one of the greatest passing-defensive minds in the nation, with a playbook about as complicated as they get.  Cornerback is arguably the most difficult and time-consuming position to learn, especially with a coach who uses a lot of zone-coverage schemes.

You just might agree that Milliner had a good season, and Saban had season-long faith in him.  Now that he's suffered a season of on-field hazing by SEC quarterbacks, Milliner looks poised to make his own little island in 2011. 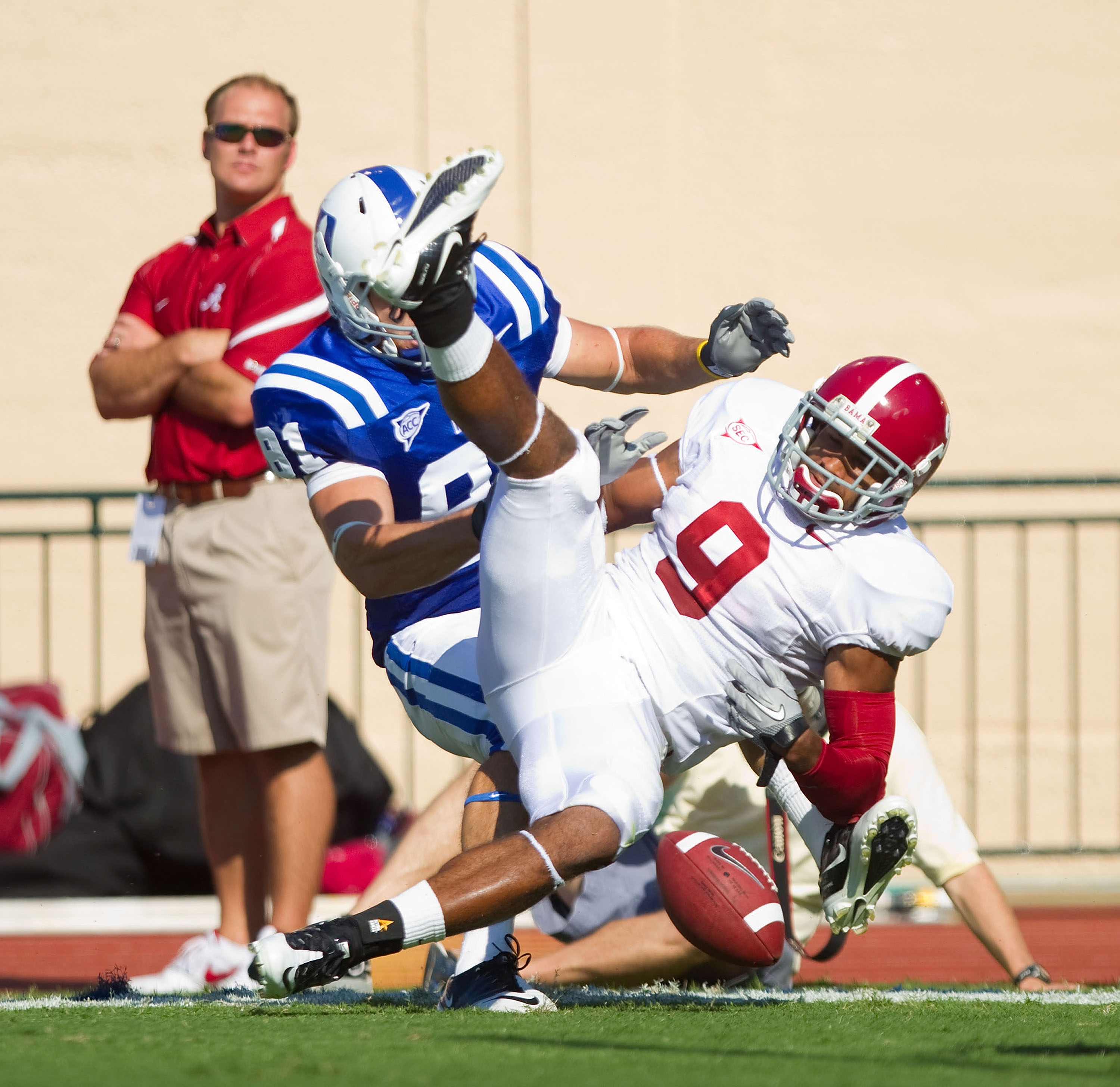 As before, Phelon (fee-lon, not felon) Jones has the size, strength and speed you want in a corner. Obviously he is no Patrick Peterson, or he would still be wearing purple and yellow.

Regardless, he played in nine games as a freshman for LSU before transferring to Alabama.  A shrewd move for certain, as it was well-known the Crimson Tide would be lacking in the secondary come 2010.

"[Alabama's] going to have five of their top eight guys leaving next year. Everything's good at LSU; it just wasn't the right fit. I wasn't going to get as much [playing time] as I wanted," Jones said.

Jones sat out his sophomore season due to NCAA transfer mandates, and you can bet he spent this time getting some high-quality H2O (and training).

During his tenure under Miles, the young man became the go-to guy in LSU's nickel packages and spent most of 2010 filling this role as well.

In the 2007 recruiting class, Jones was ranked as the No. 10 cornerback in the nation.  Now that he's out from under Miles' wing and under Saban's tutelage, the 6'0", 200-pound blazing cornerback told his father, "Daddy, in the short time I've been here under Coach Sa­ban, I'm twice the football player I was before I got here."

What did Saban have to say about Jones?

"Phelon is learning things for the first time," Saban said, before the 2010 season.

Now that Jones has learned for an entire year, the sky's the limit.

CB DeQuan Menzie: If He Stays Healthy, He Will Produce 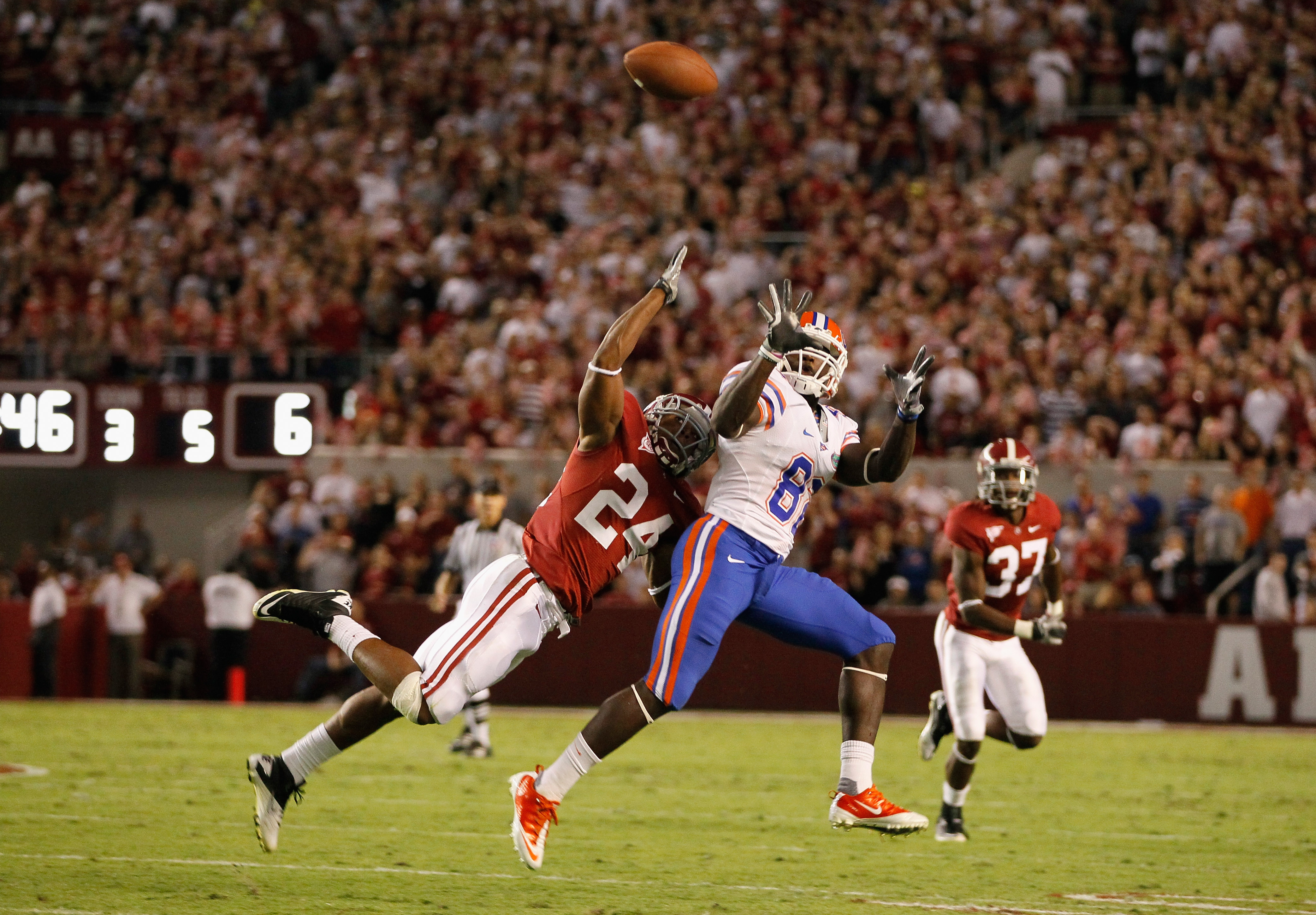 DeQuan Menzie, a Georgia native, entered the 2010 season as a junior college transfer out of Copiah-Lincoln Community College in Mississippi.  He was rated as a 4-star defensive back, with Rivals rating him as the 14th junior college prospect in the nation.

Things looked grim for Menzie though.

In April of 2010 he suffered a torn Achilles' tendon while playing basketball of all things, and he looked to red shirt in 2010.

What did Greg McElroy have to say about him in July, just a mere three months later?

"One thing that's really stood out to me is the fact that he's fresh off a torn Achilles' tendon, and he's participating full speed in 7-on-7. That's remarkable. That's a true testament to the way he's worked to get back out there," McElroy said.

It didn't take him long to be named the new starter in Kareem Jackson's old spot, but not long into the season, he was back to square one when he was sidelined with a mild groin injury for several games.

Hopefully 2011 will treat Menzie better.  As long as he stays healthy, the 6'0", 200-pound cornerback should hold down the starting position.  2011 could be his breakout year and is his final chance to impress NFL scouts.

S Robby Green: Hopefully he Won't Look as Silly in 2011 as He Does in this Photo 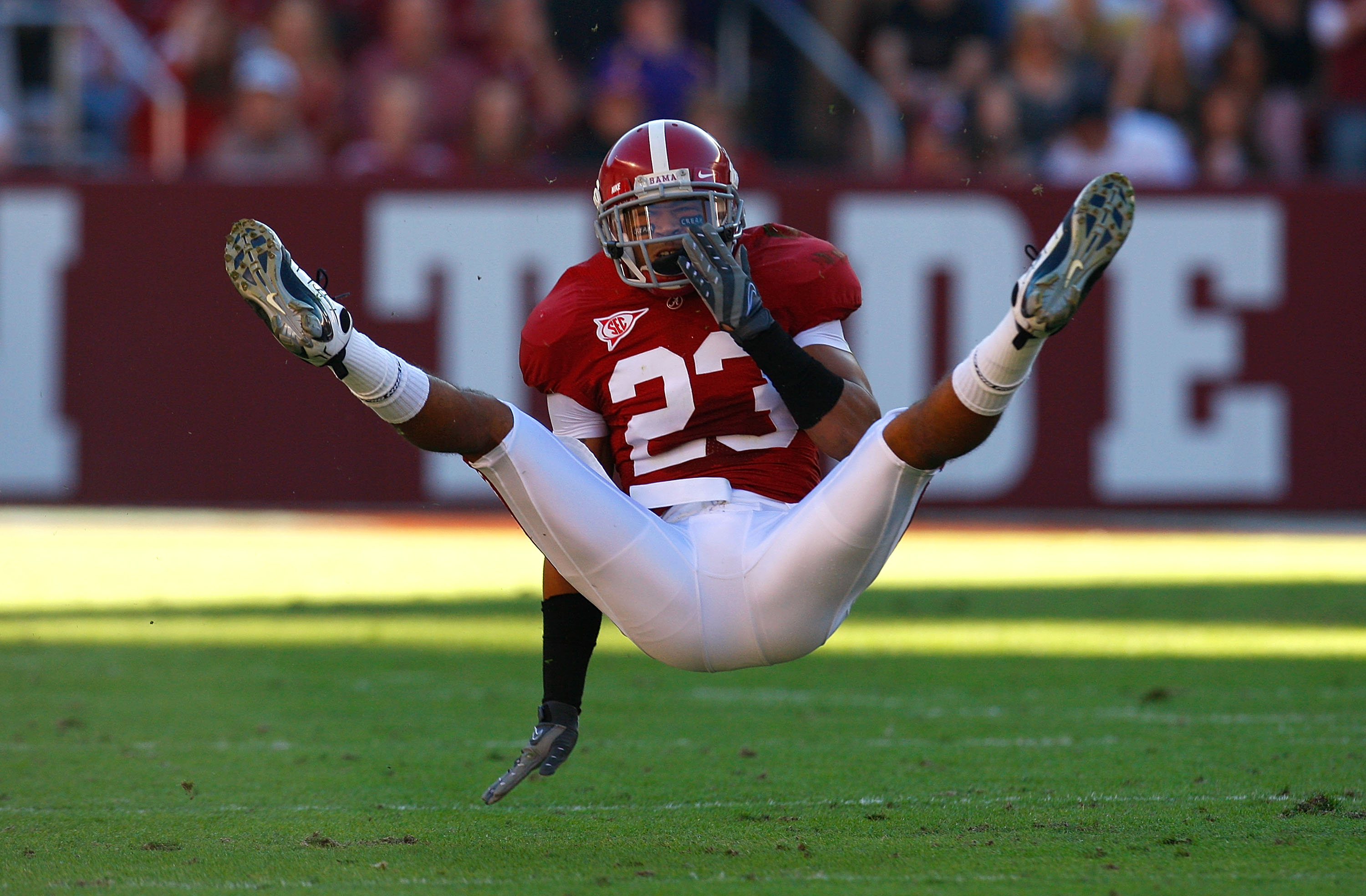 Robby Green was a star backup in 2009 and was used extensively in dime and nickel packages.  He was expected to easily snag the starting position at free safety from MLB departure Justin Woodall, but Green was suspended for the 2010 season.

While this was a major blow to Alabama, I consider it a blessing in disguise. How else would we have known just how good Robert Lester is?

Green performed fairly well his sophomore season during the 2009 championship run.  In his upcoming senior season, he is expected to compete for the free safety slot against Lester.  Barring injury, the odds of Green overtaking Lester seem pretty bleak to me.

At 6'0" and 200 pounds, Green has adequate size to be a college football safety.  Even if this athletic young man doesn't win the starting spot, you can expect him to fill in for dime/nickel packages and special teams. 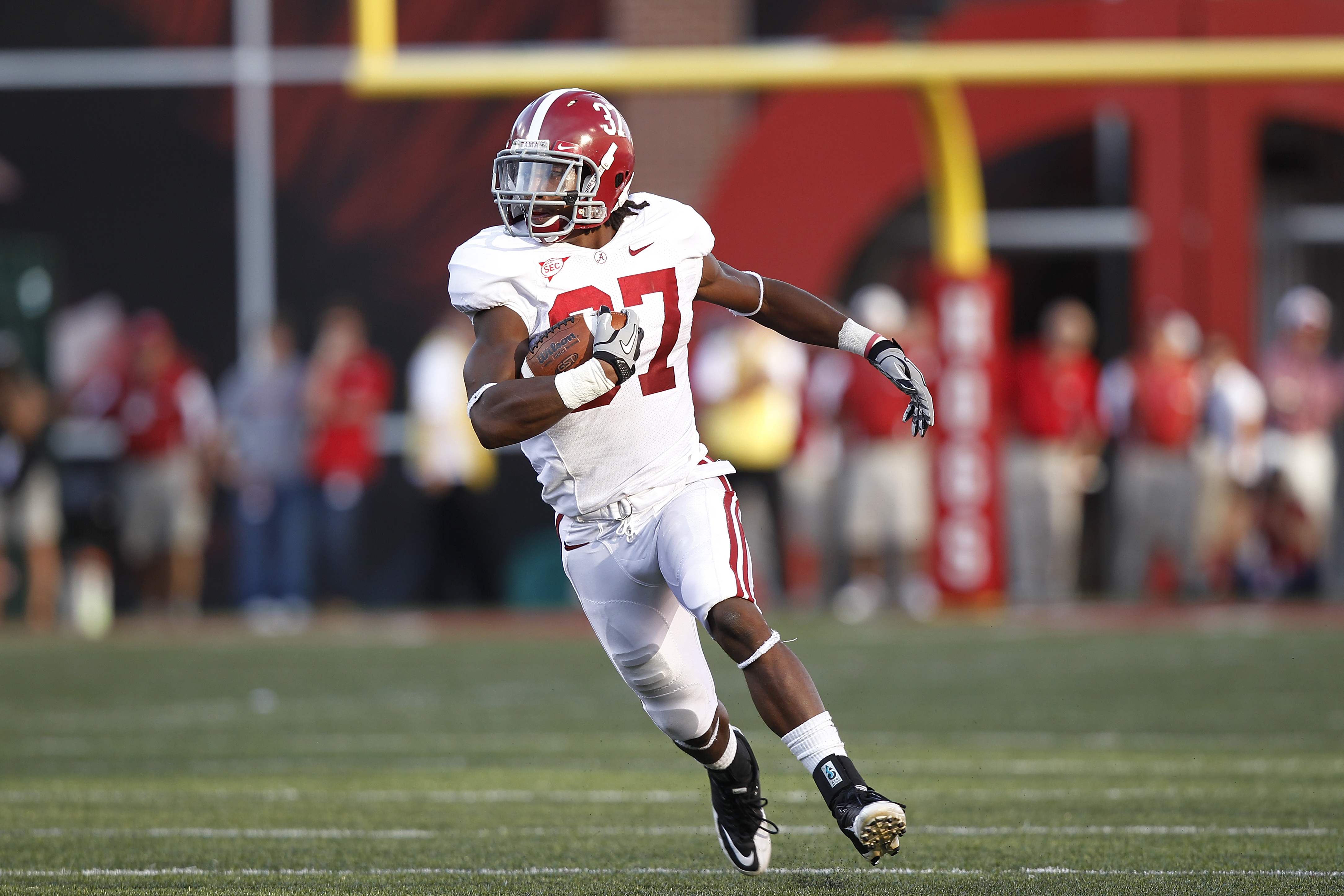 This guy knows what to do with a pick.Joe Robbins/Getty Images

Coming into 2010, Robert Lester was seen as a hand-me-down safety.  Everybody wanted Robby Green, but had to settle for Lester.

Though Lester was ranked 36th as a 3-star prospect coming out of high school with a very underwhelming 4.58 40, he did have one little known intangible: Lester was in the same recruiting class as Julio Jones and played on the same high school team as well.

Multiple years practicing against the top-ranked 5-star wide receiver before even getting to college is nothing to scoff at.  Having cut his teeth against that kind of competition helped Lester show up to play when given the chance.

During the 2010 season, he didn't do very much.  All he did was overshadow Tide star Mark Barron and ended at No. 2 in the nation with eight interceptions.  Nope, not much at all.  Not bad for a consolation prize.

I'm a firm believer that Julio became the receiver he is today because of his time practicing against Lester and vice versa. I expect Lester to hold down the starting position for both his upcoming red shirt junior and senior seasons.

S Mark Barron: A Broken Boob Brings Him Back 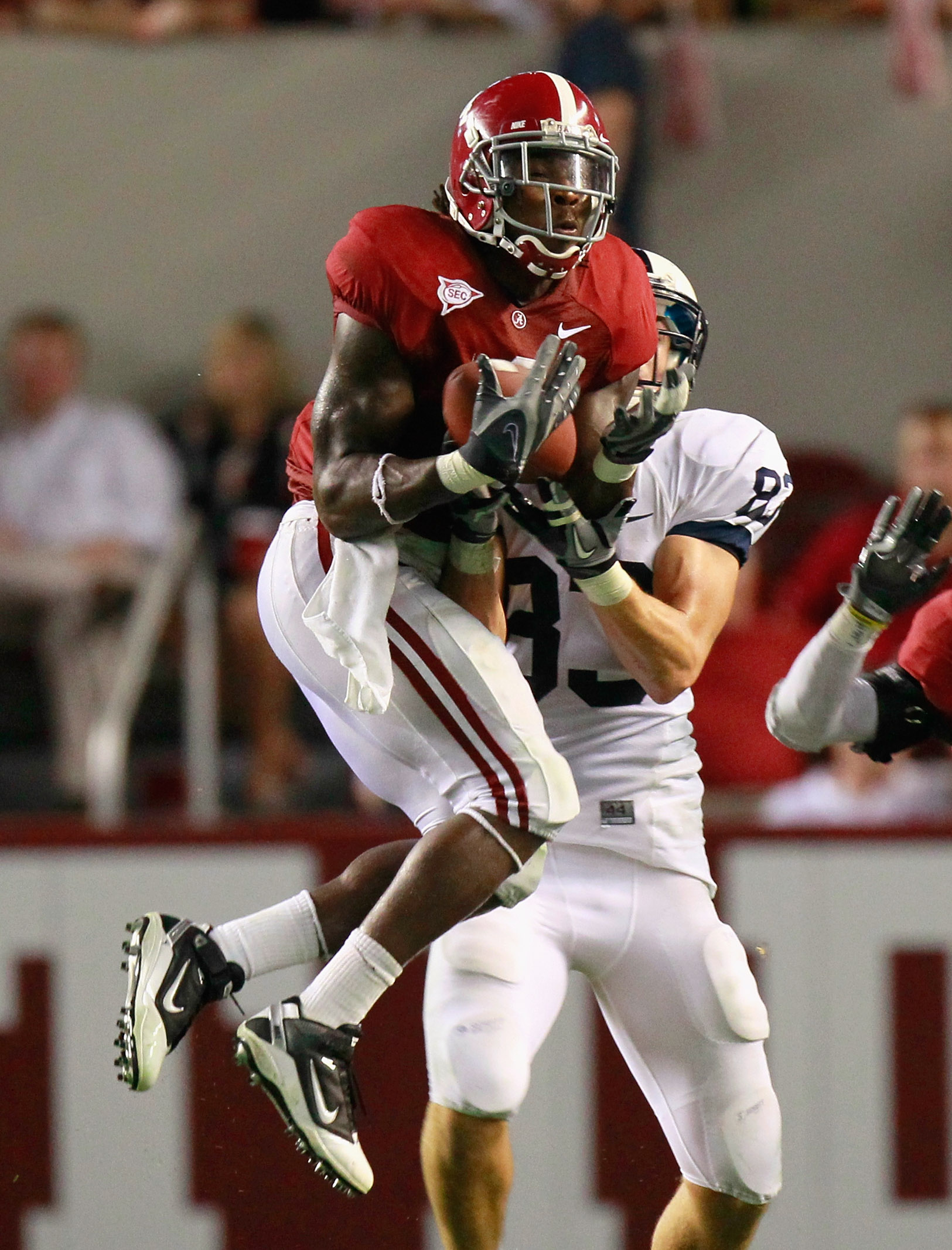 Back up, this my interception!Kevin C. Cox/Getty Images

The possibility of Mark Barron entering the 2011 NFL Draft was up for debate for most of the 2010 season. Some swore he wouldn't make the jump as a junior, while others thought it to be a strong possibility.

Regardless of what would have happened, the fact remains that Barron tore a pectoral muscle during the Iron Bowl and had to sit out the Capital One Bowl.

With his draft status already in question, the fairly severe injury led Barron to decide to return for his senior season.

While he had a good 2010 campaign, in reality, it really didn't seem like it.

After a stellar 2009 season where he was a national leader with seven interceptions and sat third on the team with with 63 tackles in the first 13 games, it can be assumed that fans just expected too much from the young safety.

Barron did, however, still muster three interceptions this year and led the Tide in tackles with 75.

Numbers like he had in 2009 aren't easy to copy; just look at Mark Ingram.  It didn't help his case with the upstart Robert Lester hogging all the picks either.

Entering the 2011 season as the defensive backfield general, Barron will have memorized Nick Saban's playbook, learned everything Kirby Smart can teach him and solidified himself as one of the best safeties Alabama has ever seen.

If he stays healthy, we may very well have a first-round 2012 NFL Draft pick here. 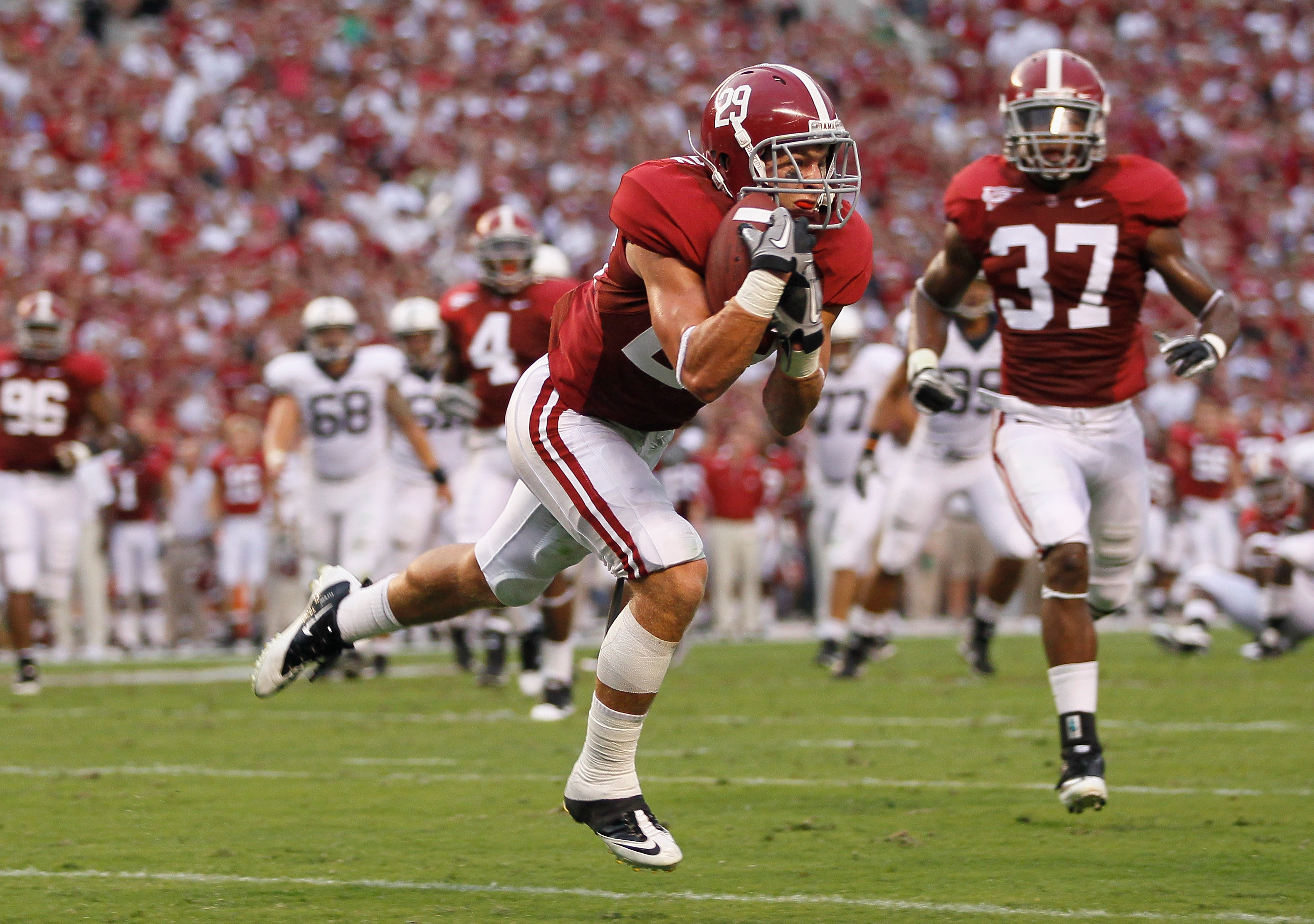 His story is similar, though.

Going into 2011, Lowery will still have two years of eligibility left as a redshirt junior.  The undersized walk-on's journey in Crimson has been a special one.  Without getting into lengthy details. you can read his story at willofachampion.com.

Listed at around 5'9" and 190 pounds, Lowery had to work with what he had.  Lacking several inches and a good 20 pounds compared to most college safeties meant Lowery just had to work a little harder than everyone else.

Lowery collected a couple interceptions en route to a 21-solo tackle season; not bad for a walk-on who only saw action during nickel and dime packages.  Lowery impressed someone though, as he started in the Capital One Bowl while Mark Barron sat out the game with an injury.

As much as I like Will Lowery, I expect his participation in 2011 to diminish. With all the secondary starters returning and Robby Green coming off suspension, there just won't be much room for him in the rotations.

You can bet though that he'll make the most of whatever time he's given. Dream big. Never Quit.

S Ha'Sean Clinton-Dix: Hoping He Lives Up to the Hype 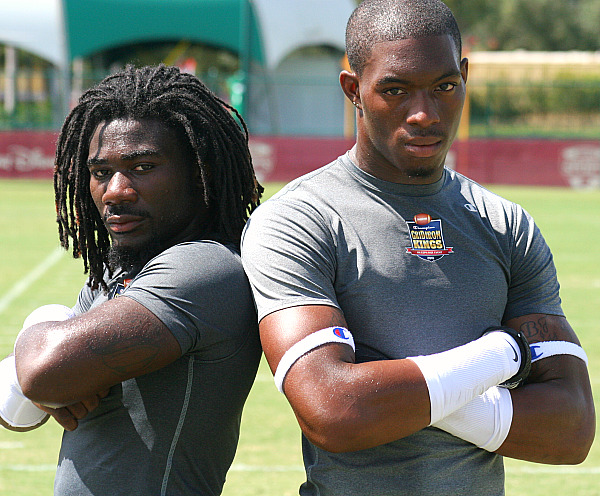 Ha'Sean Clinton-Dix is considered by some to be the Tide's top recruit this year.  The 5-star recruit is ranked by Rivals as the seventh best prospect in the nation overall and No. 1 in his position.

There's not much you can say about the player other than he has raw, sky-high potential.  Other than some minor footwork issues, Clinton-Dix is about as good as you can find in a safety coming out of high school.

Provided he stays healthy, once this guy gets a few years of Saban's tutelage under his belt, he could easily be a future first-rounder.

Ha'Sean Clinton-Dix's commitment to the Tide was also Demetrius Hart's deciding factor when he switched his commitment from Michigan to Alabama.  Two birds, one stone. 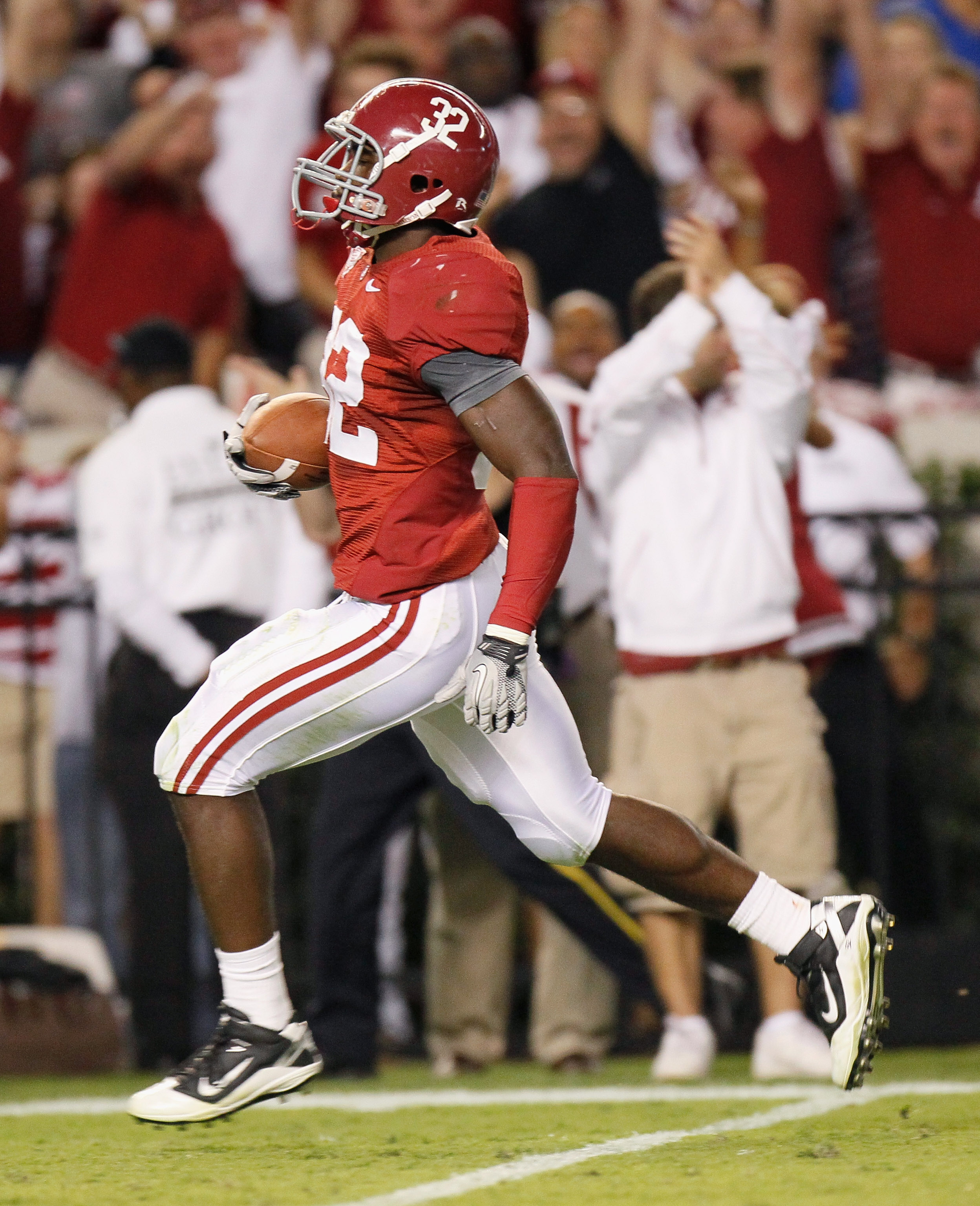 Okay, so C.J. Mosley is an inside linebacker.  After Dont'a Hightower proved to be a bit sluggish and not quite as instinctual as Rolando McClain, he was moved to his old position at Will linebacker.

Several players, including Hightower, have said Mosley looks very much like a young McClain. Count me in.

In 2010 Mosley was third on the team in tackles with 67, just two less than Hightower, and also tied Hightower with 30 solo tackles.

The exclamation point on his resume though, are his two interceptions he returned for touchdowns. Enjoy him while you can, Alabama, because he'll be playing on Monday nights soon enough.