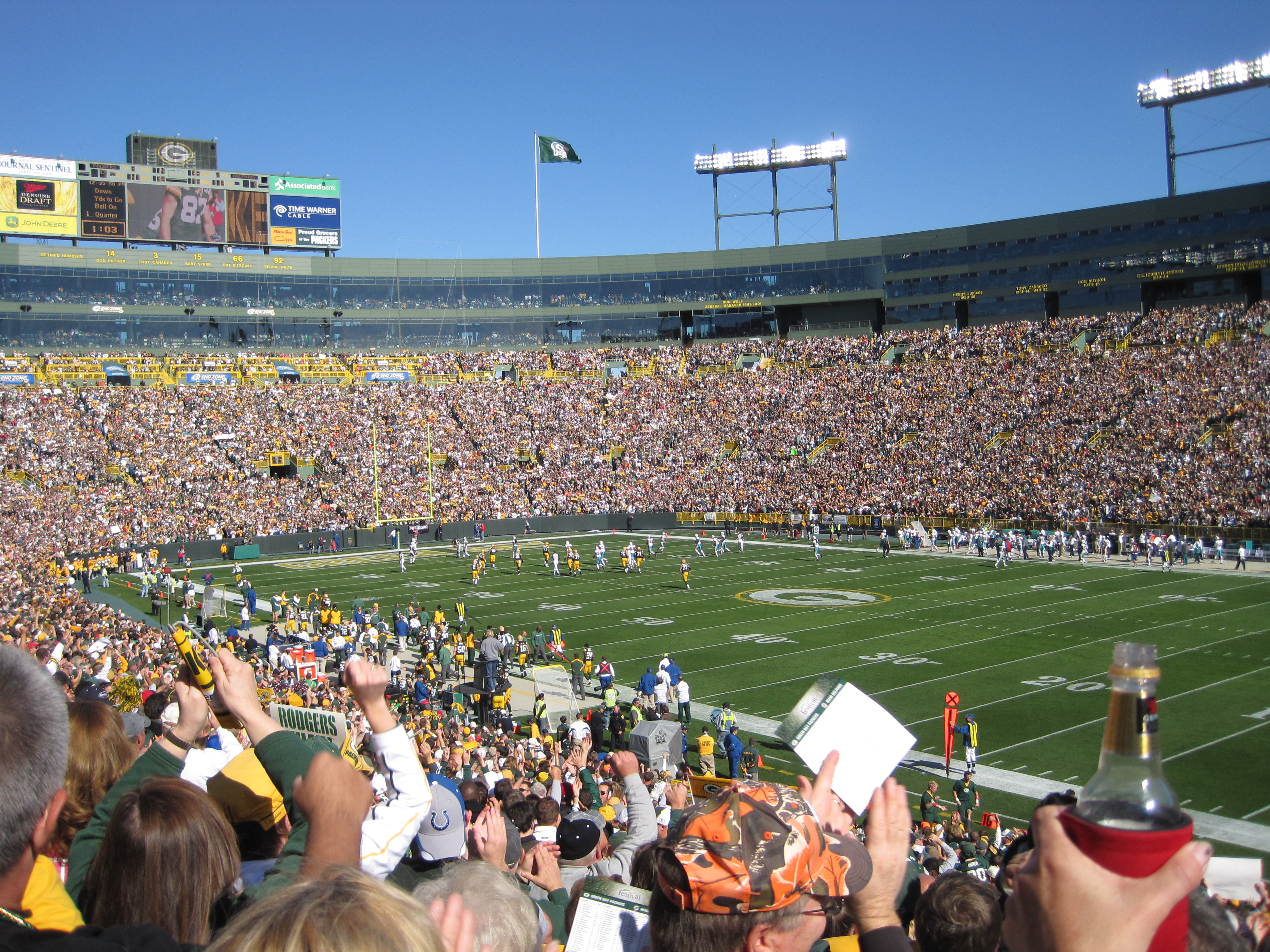 Lambeau Field sits along Lombardi Avenue in Green Bay, Wisconsin and stands as a monument of nearly a century of Packers' history. It was named after Curly Lambeau, the Packers' founder, as well as player and head coach.

For any avid football fan it is a necessity to at least make one pilgrimage to the historic gridiron to see Titletown's team give it their all on the legendary turf. Although if you mind the cold, you had better get tickets to a game before November rolls around or you'll find yourself shivering on the bleacher seats next to a man wearing only blaze orange and a cheesehead.

You'll still see the occasional Favre jersey or Ray Nitschke throwback, but now most Packer backers are clothing themselves with Rodgers or Matthews attire. From the military fly over to the end of the game, it is a memorable experience. Besides the exquisite tailgating and Miller Lite, here is why Lambeau Field is the best stadium in the NFL. 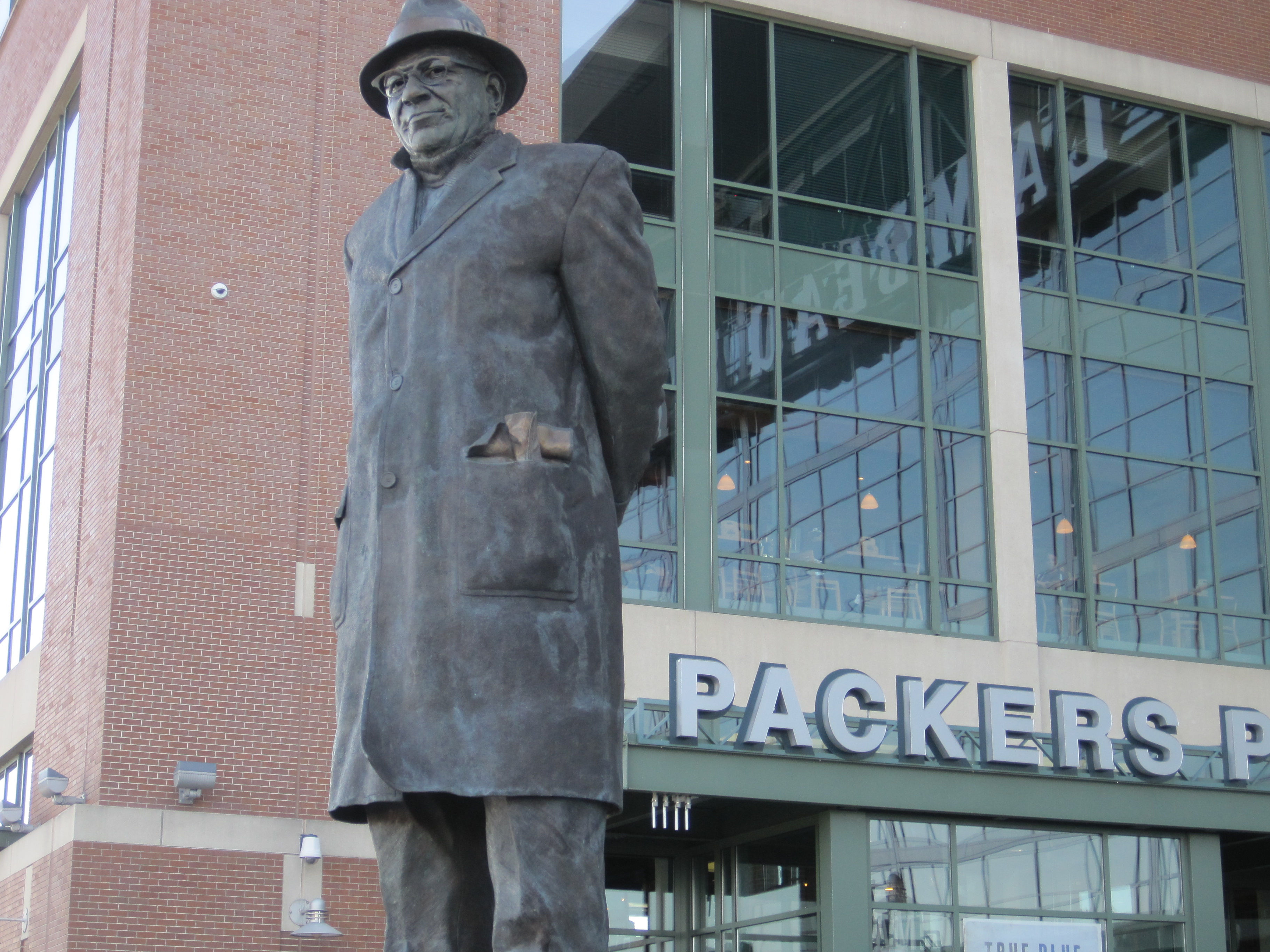 Lambeau Field, first called New City Stadium before being renamed in 1965, is the oldest stadium in the NFL.

It opened in September of 1957 as the Packers defeated the rival Chicago Bears to break in the new natural grass playing field.

In December 1967, its sub-zero temperatures and piercing winds set the stage for one of the greatest games in NFL history. The Packers won the 1967 NFL Championship, now known as the Ice Bowl, topping the Cowboys on the rock hard field to advance to the first Super Bowl.

Lambeau Field's nickname, the Frozen Tundra, is a reference to the conditions of the field during that unforgettable game in which the wind chill was -36 degrees and the ground was like ice because the heating system failed.

In addition to the great games played at Lambeau, many Hall of Famers and future Hall of Famers have shined on the Frozen Tundra-- Bart Starr, Don Hutson, Paul Hornung, Jim Taylor, Ray Nitschke, Reggie White, and Brett Favre to name a few as well as the legendary coach Vince Lombardi. 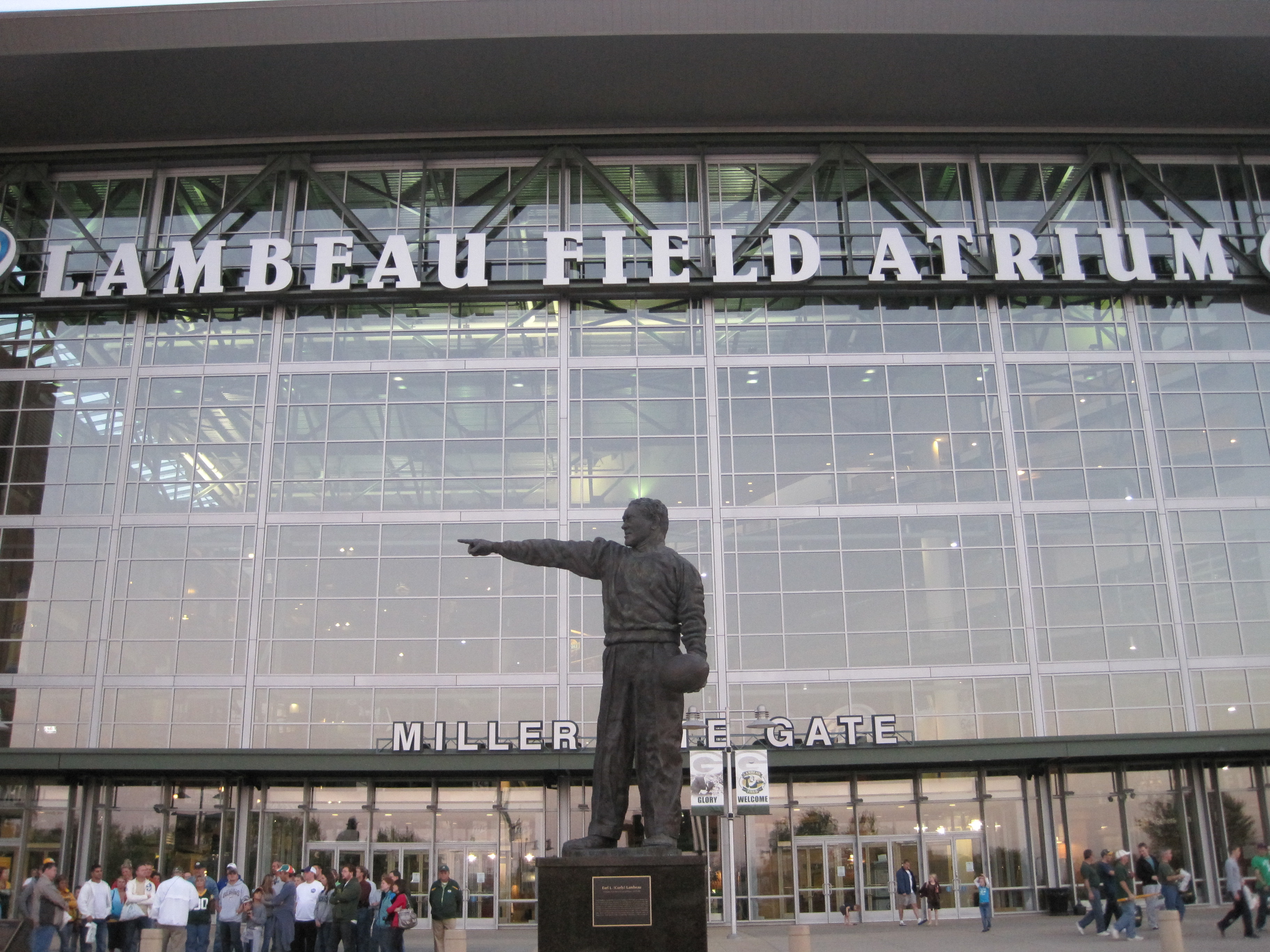 Since the renovation in 2003, Lambeau Field has become much more than a place to watch a good football game. Luxury seats were added as well as an atrium that includes several attractions for fans.

The Packers Pro Shop has everything Packers from cheeseheads to grills with the team's colors and logo. The Packers Hall of Fame includes around 80 exhibits, a replica of Lombardi's office, and the three Super Bowl trophies, soon to be four. There is also Curly's Pub if you're in the mood for something more than concessions food, and inside there is a whopping 138 TVs to add to the dining experience.

If you want to embark on a tour of the field itself, guides will take you through the team's tunnel and out to the field's edge to examine the new mixture of artificial turf and natural grass. Lambeau Field has held many weddings, receptions, and even business meetings in its large conference rooms as well as trade shows.

Just to attend a game at the historic field is enough, but the rest of its features just enhance the terrific experience and add to the value of the best stadium in the NFL. 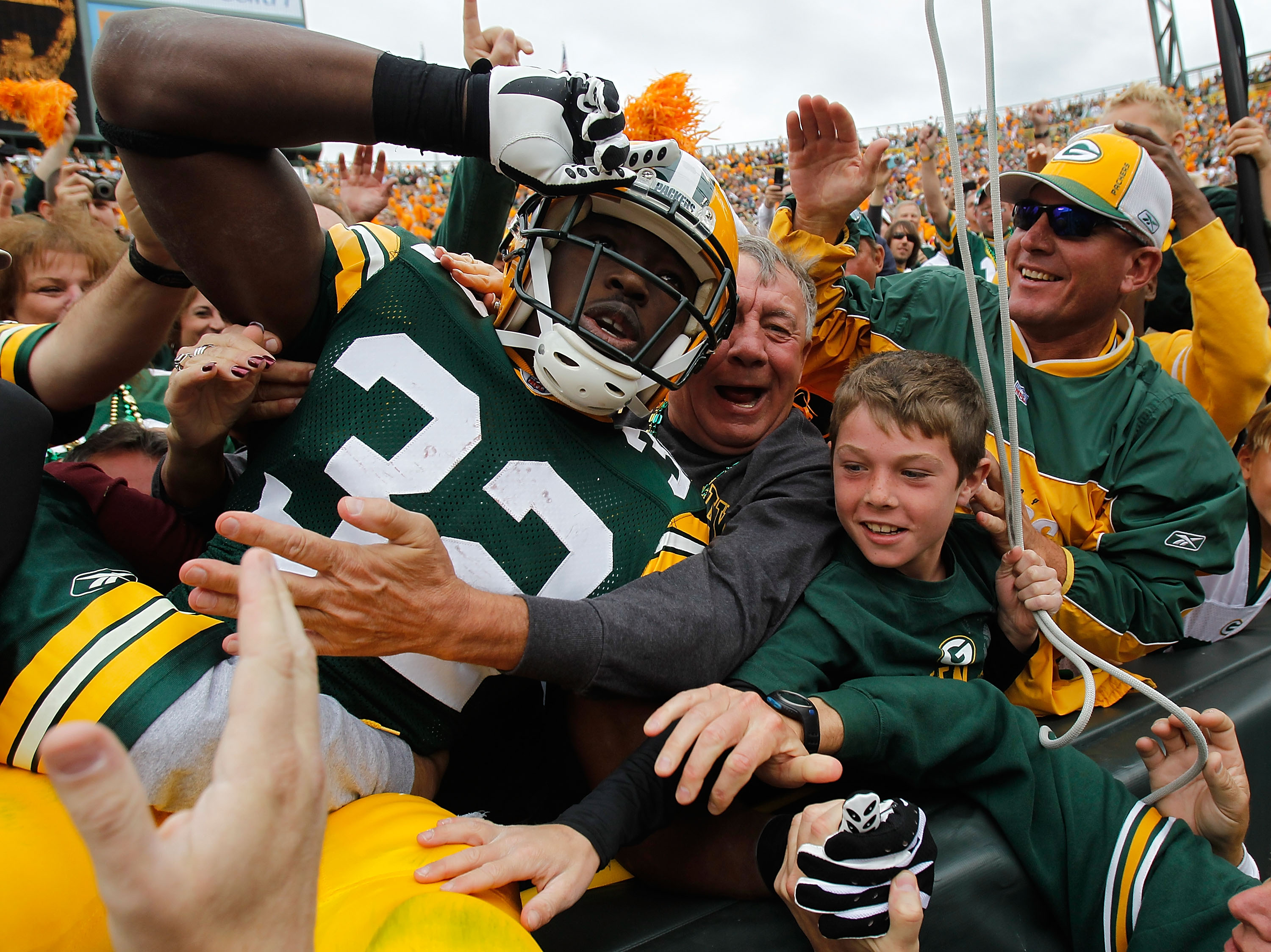 The Packers' fans are perhaps the best in the NFL, and they are part of the reason why the stadium has been ranked at the top of ESPN and Sports Illustrated's standings.

A chorus of "Go Pack Go!" echos in the open air stadium several times throughout the game, but probably the most famous tradition at the field is the Lambeau Leap.

It was invented by former Packers' safety LeRoy Butler, and involves a player jumping up on the wall into a crowd of fans after scoring a touchdown. It may look simple, but to make a successful leap is no easy feat. At its highest the wall is between six and eight feet tall.

In the Packers Hall of Fame there is a replica wall where tourists can try it out for themselves, most people embarass themselves by trying. It is a touchdown celebration so unique and so awesome that even the NFL won't penalize the leaper. 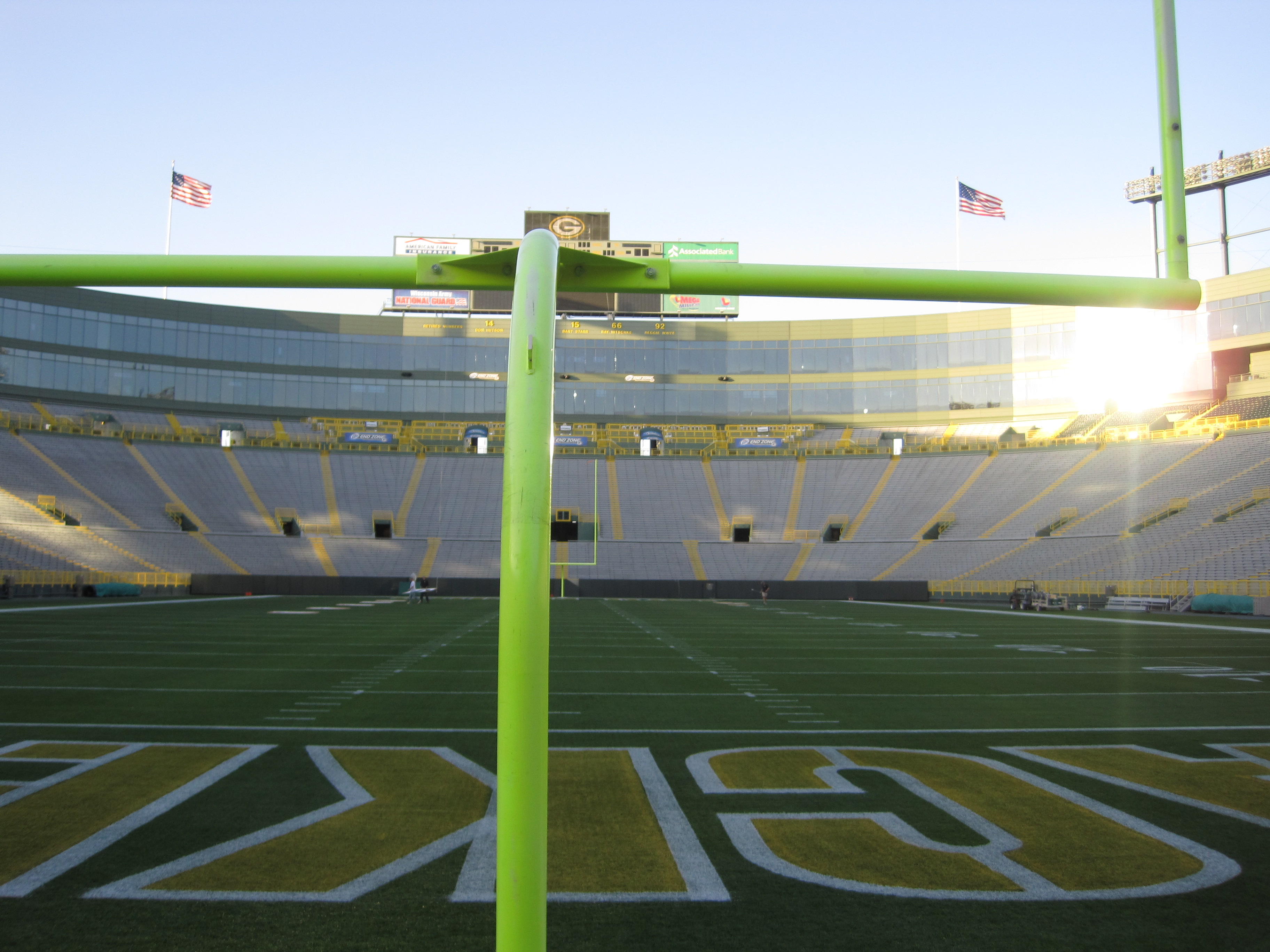 In addition to being the oldest stadium in the league, it still has the original bowl seating beneath all the new renovations as well as the natural grass. It is smack dab in the middle of residential housing and if you didn't know where you were going, you'd think you were no where near an NFL stadium.

It holds around 73,000 fans, mostly passionate Packer backers, a capacity that has more than doubled since its opening. Tailgaters will offer any passerby a bite to eat and if you desire you can watch the players park and enter the stadium if you get there about two hours prior to kickoff.

There is not a bad seat in the place, and you can mingle around the bowl before the game starts. If people haven't claimed their seats yet, it is easy to walk down to field level or stand next to the tunnel as players run out for warm-ups.

Although it is the least modern stadium in the NFL, next season new HD scoreboards and a better sound system will be introduced. Lambeau Field is best experience the NFL has to offer and it will only get better.

Any true fan must make a visit in their lifetime. The only down side is you won't want to leave and you'll always want to go back to the legendary field.